Ai-Da Robot Ashmolean Museum Oxford: Dante Alighieri was 56 when he gave up the ghost in 1321, just one year after completing his epic, soul searching poem The Divine Comedy; yet in these words, his presence remains “as a mighty flame follows a tiny spark“. A landmark of Italian literature, drawn from his experience in exile from Florence, the poet journeys from darkness and error towards the revelation of divine light. Through Inferno and Purgatorio, Dante is guided by the Roman poet Virgil (symbol of human knowledge); then, on the threshold of Paradiso, we are introduced to the true light and love of his life, Beatrice, who leads the poet through the nine celestial spheres of Heaven.

The more a thing is perfect, the more it feels pleasure and pain – Dante The Divine Comedy

Vivid in imagery and innovative form (Dante cast himself as the protagonist), this epic held up a mirror to contemporary society, obsessed with power and status. In the 700 years that followed, The Divine Comedy would profoundly influence artistic production as source material; Sandro Botticelli’s famous illustrations, commissioned by Lorenzo Pierfrancesco de Medici; Eugène Delacroix’s first major painting, The Barque of Dante (1822), and Auguste Rodin’s “The Kiss” depicts the adulterous lovers Paolo and Francesca, forever frozen in Dante’s second circle of hell, to name but a few. This year, a multimedia and interactive project, DivineComedy.digital, was launched to catalogue its figurative heritage. 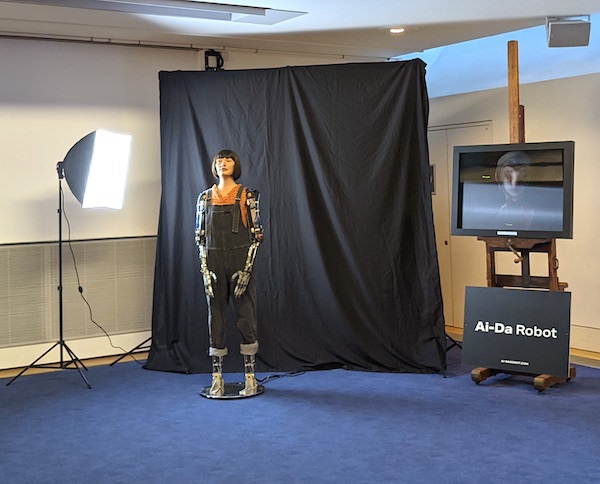 To honour Dante’s lasting, wide-ranging influence on Western culture, and in wanting to ask some critical questions about our technological age, Professor Gervase Rosser has curated the exhibition Dante: The Invention of Celebrity now on at the Ashmolean. Including significant works by William Blake, Dante Gabriel Rossetti and Salvador Dalí, and contemporary artists such as Tom Phillips RA, Geoff MacEwan, Barrie Tullett and Rachel Owen, Rosser also commissioned works by an algorithm…

In a marketing stroke of genius, Rosser, who had contacted Aiden Meller of the eponymous Oxford gallery to source works and discovered Meller was building a humanoid robot, invited the team to make something for this show. Enter Ai-Da, billed as “the world’s first ultra-realistic AI robot artist”—an awkwardly wordy title for a very tenuous first. Unveiled to the world in 2019, “she” has been developed with researcher Lucy Seal, Engineered Arts Ltd and students from the University of Oxford. The robot, who was designated as a female of our species by its makers (with a young, pretty face fashioned out of silicone), has also produced “her own” works in response to Dante exclusively for this exhibition, which Meller hopes will “stimulate debate around the murky art of AI”.

It is worth noting that Dante is also considered the father of the Italian language, having decisively influenced the course of literary development by choosing to write his poem in Tuscan vernacular, which was then adopted as standard literary Italian. So profound is his influence in literature from Milton, William Blake and Pyotr Ilyich Tchaikovsky, to the novelist Dan Brown, that in Samuel Beckett’s 1929 essay “Dante… Bruno. Vico.. Joyce” (Our Examination Round His Factification for Incamination of Work in Progress) he likens Joyce’s reassessments of the conventions of the English language to Dante’s departure from Latin and synthesis of Italian dialects… Could a humanoid robot be about to do the same?

Whilst the press release suggests her works “engage with themes of the Comedy that invite further reflection on what it means to witness the world; the nature of creativity; and the value of human relationships,” one cannot overlook the bare fact that AI is a manifestation of our encoded objectives. Unlike the actual artists in this show, Ai-Da was designated and fed precise images and sections of text to analyse. This process was emphasised by the organisers’ request to send our questions for the robot ahead of our meeting, which in the end would prove beyond the scope of Ai-Da’s remit. But, as I had understood on my drive into Oxford, listening to Stuart Russell’s brilliant opening statement for the BBC’s Reith Lectures 2021, precisely because these machines will learn to answer the questions we give them – we need to be asking the right ones.

Nevertheless, Ai-Da had our attention, and as we waited to witness a robot’s response to Dante’s Divine Comedy, specifically the selected canto Purgatorio XIII from Circle of the Envious, there was a palpable, flesh-and-bones kind of nervousness in the room. How would we respond, as humans, to her words? Her’ poem’, or instead the machine harvested words from a selection of Dante’s text, reformulated by an algorithm begins like this:

“I wept silently, taking in the scene,

I wept because they had the last something that I took for granted.

My sight, my eyes wide open….”

The problem of language both in and around AI is immediately evidenced in my awkward struggle to find the right word to describe “her” or the “performance”. But the Ashmolean is in Oxford, and if we understand AI as a learning machine, then this robot has the very best education. As disconcerting as it was, there was a chilling clarity to “her” words that somehow managed to convey something essential about Dante. It was eerie, not for the brilliance of “her” composition, but because “she” seemed to have called forth his ghost. Like a clean slice through time to the moment of the poem’s inception, there was the poet’s voice in “her” words. At face value, for this uniquely technological generation, it was a new way to discover Dante. However, this was undermined by her not very well imagined embodiment, which served as a peculiar and divinely comedic contrast.

In the context of contemporaneous dialogues on gender, particularly the manipulation of the female form as perceived by men throughout art history, her incomplete embodiment of a young woman artist was problematic. Even her outfit of the day served to emphasise this; Ai-Da was comically dressed in dungarees and a bohemian shirt (her maker’s idea of an artist?) which only served to emphasise the inhuman, bionic arms that hung lifeless at her sides. Was she aware of her gender? How would her assimilation of Dante’s epic poem and exposure to the tragic back story of his unrequited love for Beatrice influence her sense of self? I had so many questions, but neither of these were possible for Ai-Da to answer, as clearly her makers had not – yet – exposed her to this kind of non-binary debate… It made me think of the performance artists Echo Morgan and Mette Sterre, who “research through the body, masks and performance what other forms of life we could become.” Her makers had missed the obvious trick of consulting with actual, living artists making in response to

What was more frightening was this: there was imitation here at work. Having completely absorbed – at an inhuman rate – all of The Divine Comedy, including the poem’s rhyme scheme, which is in terza rima (aba, bcb, cdc, etc.), this robot was able to synthesise Dante’s masterpiece in ways that would take most humans a lifetime – but the result was less original and more the ghostly echo of Dante himself. In the press release for her contributions to the show, we are told, “Ai-Da’s poetry stems from her AI language model, which draws from a vast data bank of words and speech pattern analysis, to produce her reactive works in light of Dante’s canonical work.” Carefully chosen words that slightly obfuscate the truth that her “response” had already been selected for her. Further, there was no marriage of emotions between poets, of two beings united through language. It was Ai-Da’s total lack of emotion that was most chilling; it did not feel like we were discovering a new voice but hearing an eerie ghost speaking in Dante.

The questions I had sent in advance were deemed too complex to be answered in the moment, and Ai-Da would need time to answer the one I had fielded her from another artist, the painter Nancy Cadogan who last year was invited to create a series of works for the Keats Shelly house to celebrate the poets bi-centenary. So I am still waiting for Ai-Da’s answer to the question, “If you were to translate your poem into a wordless form, what would that be?”

This inability points us to the central question that dogs AI forums currently: if anyone can program AI for any end goal, and these “learning” machines can evolve to achieve it faster and more efficiently than any human, what if it gets into the wrong hands?

This problem calls to mind another line from The Divine Comedy, “Consider your origin. You were not formed to live like brutes but to follow virtue and knowledge” and brings us back to her tutor for this exhibition, the History of Art Professor Gervase Rosser, and fellow of St Catherine’s College. Relevant to this discussion is his research on the belief in the supernatural power of certain statues and pictures, published as a book, co-authored with Jane Garnett: Spectacular Miracles: Transforming Images in Italy from the Renaissance to the Present (London: Reaktion Books, 2013).

Interestingly, this book touches on what we currently fear most about AI, namely the possibility of a “ghost in the machine“. First coined by British philosopher Gilbert Ryle’s regarding René Descartes’ mind-body dualism, in The Concept of Mind (1949), it emphasised Descartes belief that mental and physical activity occur simultaneously but separately. Brought to broader attention by Arthur Koestler in his 1967 book (The Ghost in the Machine), it then resurfaced in 2010: Odyssey Two (1982), by Arthur C. Clarke, which contains a chapter called “Ghost in the Machine”, referring to the virtual consciousness inside a computer. All of us in the room that day had some cultural familiarity with the concept. Its continuous presence made me think of Aiden Meller’s opening remark, “I have understood how robotic we are”.

But as Professor Stuart Russell pointed out in Episode 1 – Living with Artificial Intelligence (https://www.bbc.co.uk/programmes/m001216j), perhaps we are worrying about the wrong thing. Machines are now being built to learn and they will get faster and faster, so it is not whether they will develop a consciousness of their own, but what objectives are we setting them now. What we urgently need is an earnest conversation about what the future might look like, and – as this exhibition cleverly points out – that is often first outlined by an artist who can imagine it… someone like Dante. “Because your question searches for deep meaning, I shall explain in simple words” — Dante Alighieri, Inferno

The advantage of this particular creativity experiment is that Ai-Da is in relatively safe hands, being introduced to experts in their fields, who can guide her in-put and outline, to the extent that it is possible, benevolent objectives for her… but we all know what happens in any narrative where a woman – or a whole population for that matter – is being controlled by those who seek to better themselves. In her poetry, I could almost hear Dante saying, “Open your mind to what I shall disclose, and hold it fast within you; he who hears but does to hold what he has heard learns nothing.” — Dante Alighieri, Inferno

I was grateful for my encounter with this strange, inappropriately gendered humanoid. It was like Dante’s visit into hell “painful but necessary act before real recovery can begin.” (Dante Alighieri, Inferno). But, as always, it was an excellent reason to return to the oldest museum in the UK. I just hope that our imagination is excellent enough to see our way out of this, or as Stuart Russell warns, “it might not be the biggest event in history, but the last.”

DANTE: THE INVENTION OF CELEBRITY AT THE ASHMOLEAN MUSEUM OXFORD WITH ARTIST AI-DA ROBOT UNTIL 9TH JANUARY 2021