Ai Weiwei’s Law of the Journey 2017 is the “big art star” showstopper for the 2018 Sydney Biennale. Ai Weiwei (b 1957 Beijing, China) is arguably the most famous Chinese artist living today, and much of his work exists in the space between art and activism, often blurring the boundaries between the two.

The Sydney Biennale is the third oldest Biennale in the world, behind São Paulo and the Venice Biennale. Inaugurated in 1973 to coincide with the opening of the Sydney opera house, it has become one of the mainstays of contemporary art circuit around the world. It was the first to exhibit aboriginal art within a contemporary context as well as being a focus of art in the Asia Pacific region.

On a recent trip back to visit my home country Australia, I had the opportunity to visit the recently opened 21st edition The Biennale of Sydney. Artistic director and curator Mami Kataoki, the first time a curator from Asia has headed the Biennale of Sydney. Kataoki has chosen the title SUPERPOSITION: Equilibrium & Engagement. 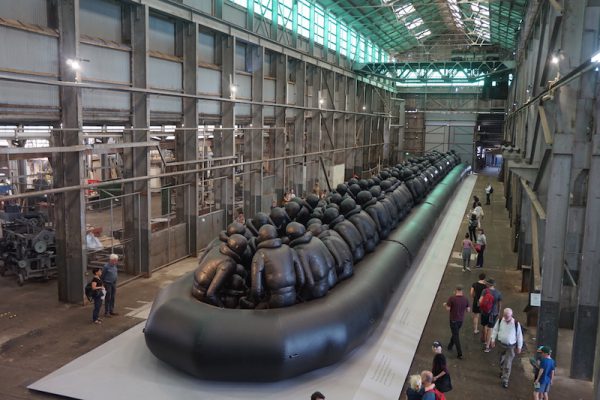 Ai Weiwei has two pieces in the exhibition. One on Cockatoo Island, a former women’s convict prison and ww2 shipbuilding island that slightly reminded me of the Arsenale space in Venice. Needing a ferry to get there, you arrive at a place that’s outside the realm of the typical city: a disused industrial area, a place that no longer has a purpose but is a place to reflect on and reflect in. The second at Artspace which is housed in the historic Gunnery Building in Woolloomooloo.

Ai Weiwei’s inclusion is obviously the major attraction for the Biennale. Law of the Journey is placed within a giant former WW2 boatbuilding hanger on Cockatoo Island, a giant 60metre inflatable life raft with hundreds of anonymous lifejacket wearing people huddled within. It is a representation of the current plight of refugees around the world. The work is meant to encompass all refugees, but there is a particular connection to the Mediterranean refugees that feature in Ai Weiwei’s documentary “Human Flow”. The work also includes a collage of iPhone photos and video screens from the making of “Human Flow”. 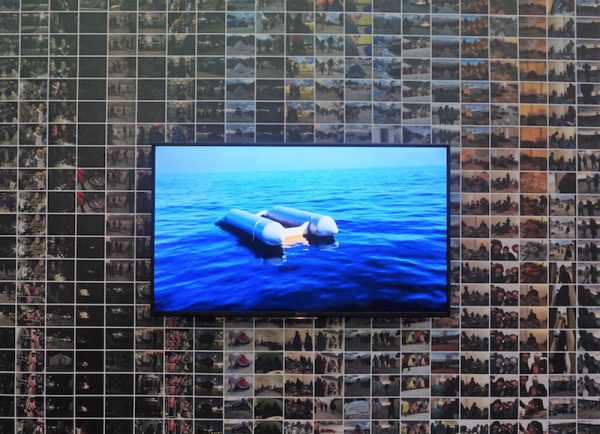 Accompanying Law of the Journey is a wallpaper featuring photographs taken by Ai on an iPhone while making the documentary film Human Flow, 2017.

Around the perimeter of the large inflatable raft, there are text quotes. One that stood out to me was “Neither Athenian or Greek but citizens of the world”, Socrates, further connecting it to the Mediterranean crisis but with this classical reference, it also relates it to a broader comment on the human condition in the wider world throughout history.
You could argue that the work also being on Cockatoo Island with its former parallel usage as a colonial prison and WW2 shipbuilding site gave added poignant local significance. By placing an enormous refugee raft in what was used to make warships and on an island that also once was a prison, you might argue draws out further comparisons to Australia’s current political situation and approach to the treatment of refugees and offshore detention centres.
You could say this connection is further drawn out with the quote that’s placed at the bow of the boat beginning and ending the work with “with the exception of indigenous peoples, we are a nation of boat people whose forebears made the journey from elsewhere to our shores. How we assist succeeding generations in adjusting to their new country is one of the measures of Australia’s maturity and well-being as a nation”. 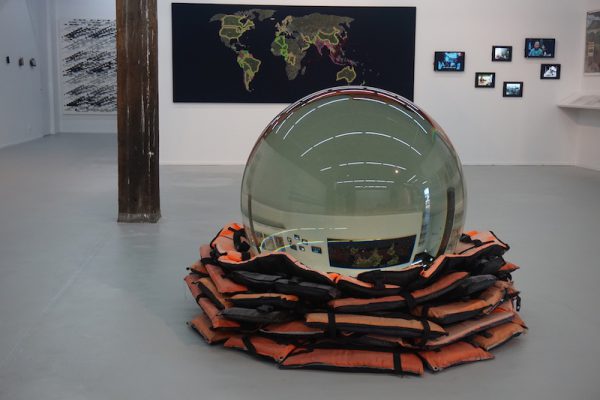 The second Ai Weiwei piece Crystal Ball in Artspace is a companion piece depicting a giant glass globe cradled in a nest of lifejackets referencing the prediction of a chaotic unknown future for the millions forced to leave their homes to escape war and conflict.

I am for one glad these works are being shown as key works for the Biennale.

Martin Brown Began his art practice in Australia, originally from Canberra, lived and worked for many years in Sydney, studied Art at the National Art School Sydney and exhibited at Australian Galleries, before relocating to London where he has been for the last 15 years.  martinbrownartist.com