Sue Hubbard visited Dublin to see The Map: A Collaboration by Alice Maher and Rachel Fallon at Rua Red Gallery.

The Map is a political and sociological, as well as an artistic project.

If you were born in heathen England, you may not be too familiar with Mary Magdalene. You might even think she’s the same Mary that sits wrapped in a blue sheet beside the lad sporting a striped tea towel, pretending to be Joseph in the school nativity. But if you’ve grown up in a Catholic country, particularly Ireland, her presence is ubiquitous. So to get things straight, Mary Magdalene was the woman who, according to the four canonical gospels, travelled with Jesus as one of his followers, was witness to his crucifixion and resurrection and was considered one of his most devoted followers. In the Gnostic gospels, Mary Magdalene’s closeness to Jesus created jealous tension with another disciple, Peter, because of her sex. The portrayal of Mary Magdalene as a prostitute began in 591 when Pope Gregory I conflated Mary Magdalene with Mary of Bethany and the unnamed “sinful woman” who anointed Jesus’ feet in Luke 7:36-50. Pope Gregory’s Easter sermon resulted in a widespread belief that Mary Magdalene was a prostitute. This typecasting has suited both the Catholic church and patriarchy well over the years, allowing them to control and typecast women as either pure and virtuous mothers or wanton wayward women: Madonnas and whores. Retrieving the Magdalene from her promiscuous pigeon-hole has long been a feminist enterprise. 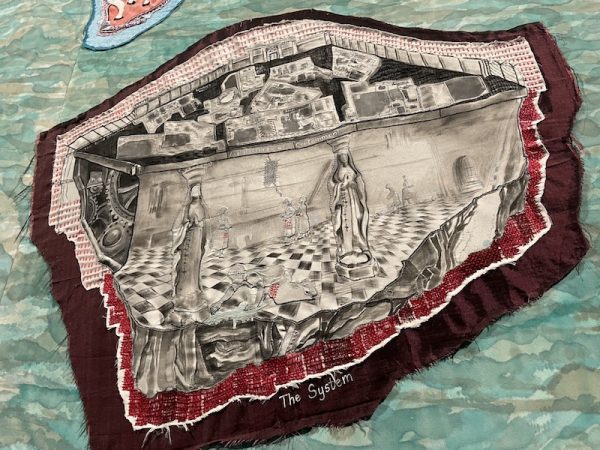 Detail from The Map, Alice Maher and Rachel Fallon

The Magdalene Series is a programme of exhibitions, interventions, performances and events curated by Maolíosa Boyle at Rua Red in Dublin, who has commissioned five of Ireland’s leading artists: Amanda Coogan, Alice Maher, Rachel Fallon, Jesse Jones and Grace Dyas to make work around this theme. The Map is the project between Alice Maher and Rachel Fallon, which pulls together different aspects of the Magdalene.

Filling almost the whole gallery is a vast sewn, stitched and embroidered banner lit with dramatic theatrical lighting. It conjures Brigid’s cloak from Irish folklore, used to acquire land from a disobliging king in order to build her monastery at Kildare. It’s also the shape of the bishop’s all-encompassing, flowing cloak, the ryasa or exorason.

Alice Maher and Rachel Fallon first met when they were making banners for the pro-choice campaign, known as “Together for Yes” – a once-in-a-generation chance to vote out Ireland’s repressive abortion laws, some of the strictest in the world. The Map shares much of the ferocity of Paula’s Rego’s abortion paintings but, here, there is humour and irony too. The vast fabric is dotted with sewn, stitched and patched islands. There is no north, south, east or west. No hierarchy. Place names such as The Cove of Mitigating Circumstances, Jezebel Heights, Scapegoats Estate, The City of Lovers, Utopia etc., conjure that great Protestant moral text, The Pilgrim’s Progress. Ancient looking Pillars of Society and a many breasted sphynx-lady preside over a desert named La La Land, while the surrounding seas are full of monstrous whales named Ignorance and Poverty – suggesting that beyond the known lies the realm of the other. 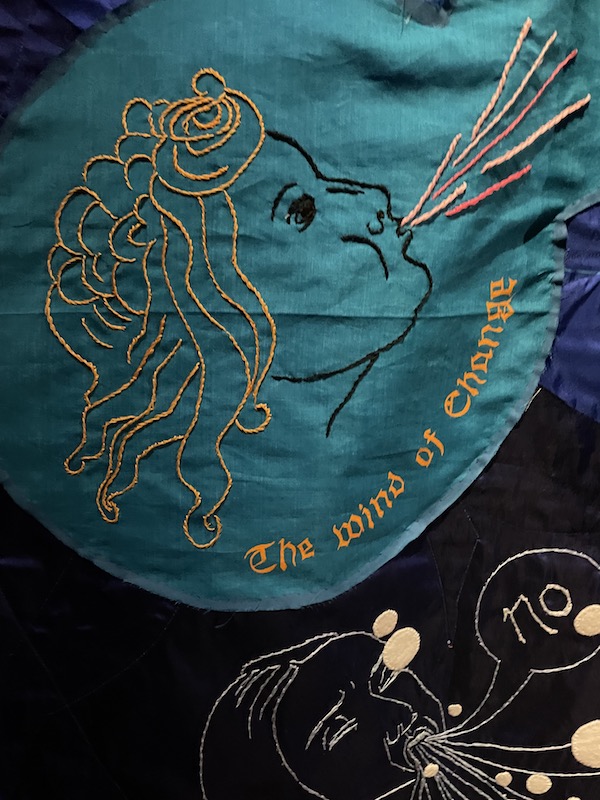 Detail from The Map, Alice Maher and Rachel Fallon

The deep blue outer edge is filled with white stitched constellations. There’s a Dragon Slayer and, elsewhere, The Little Laundress hangs up her washing on a line of stars, a reminder that the most repressive regime for unmarried mothers in Ireland, the Magdalene Laundries, condemned girls who had ‘transgressed’, to virtual penal servitude in the name of the fallen Mary. Little portrait lockets hang across the work showing the faces of such young women given names such as Rosa, Nan, Makeda. And behind the whole, as if covered for modesty by the bishop’s cape, we can see the flame-haired locks of a woman. Her red hair ripples like tongues of fire, denoting immodesty, danger and sexuality. At the bottom of the banner, a cascade of knotted twists of red wool falls onto the floor. Real women bleed.

Next door in the adjacent darkened gallery there’s a mesmeric text and sound installation by the writer Sinéad Gleeson and composer Stephen Shannon. A soft Irish voice reads lines such as:

This is the land of labour,

to the silken bone

giving further testament to the historic plight of women under Catholicism.

Her fourth poetry collection Swimming to Albania is published this November by Salmon Poetry, Ireland. www.suehubbard.com