Away from the political battles of Westminster, Britain’s most famous interrogator has a passion not many people know about… painting. With his latest exhibition in London, he talks to Ria Higgins about where it all started and why he refuses to be known for only one thing.

“What I love about my new job at LBC is that nobody is telling me what to think. Now, I’ve got my freedom back; I can do exactly what I want,” says Andrew Marr with a large boyish grin, sipping on a glass of red wine. “I feel younger, more vigorous, more excited about life, and if that’s seeped into some of my latest paintings and drawings, all the better.”

I am sitting with Marr on a comfy leather sofa at Eames Fine Art on South London’s trendy Bermondsey Street, talking about his latest art show. Reflecting on his own journey as a political journalist and broadcaster, he adds, “It’s just that I first came into journalism to ruffle feathers and cause trouble, but after 17 years of sitting in a grand studio, doing grand interviews for the BBC, I just wasn’t doing that anymore.” 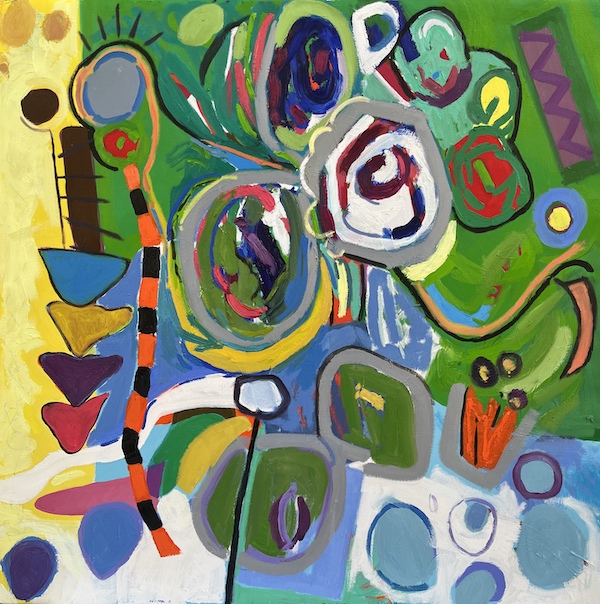 Andrew Marr, A Good Year For the Roses

Directly in front of us are two of the new paintings in his show. Like him, they appear both bold and confident. One is called Good Year for the Roses, after an Elvis Costello song, and if it has roses in it, I can barely make them out – just as he intended. He describes much of his work as semi-abstract but in this one, he has gone all the way. Vibrant greens and sea blues bounce off the canvas, swirls of creamy white and buttery yellow sing.

He completed the painting in the last three months, a time of so much change in his professional life, so with my Poirot hat on, I examine it for clues that might reveal something of his true state of mind. “Colour is definitely affected by what mood I’m in,” he explains. “When I’m at my happiest, I use lots of whites and blues and sharp yellows. Reds and browns tend to be my response to darker times.”

This is definitely a happy painting, and his excitement when talking about the colour combinations is undeniable. The price tag is just short of £5,000, which might raise a few eyebrows considering most of us know Andrew Marr for his tenacious interviewing technique rather than his dexterity with a paintbrush.

Marr says he has been painting and drawing non-stop since he was a child. In fact, he has always slightly regretted not going to art school, but he also inherited his mother’s love of books, and when he got a scholarship to study literature at Cambridge, he couldn’t refuse.

There are over 100 drawings in this show, a number which gives me a sense of the compulsion and drive that underpin it. It suggests he has a need to draw rather than a want; a trait genuine artists share.

“However busy I am, I try and draw every day, usually in the morning, in my office at our house in Primrose Hill. It’s a bit like a mental version of exercise, and any day I don’t draw is a bad day.”

Although Marr has lived more of his life in London than anywhere else, it is clear from his semi-abstract drawings that Scotland is still a huge inspiration. “I come from Longforgan, a village just outside Dundee, and within five minutes, you are in rich rolling fields, glens or woods of oak, elm and beech. Even when I’m in London, this place is always in my head.”

The same is also true of the more dramatic northwest coast, where his family has a little croft in the Highlands. “There are very few trees, but lots of mountains and wild rocky promontories where the Atlantic comes crashing in. This is my Shangri-La.”

In one drawing, Wester Ross, Wet Morning, both his colouring and line have a lightness of touch. Less is more. The air lifts. The sky opens. The mountains loom. These drawings, he explains, came about by using a technique he has been developing for some time. He takes a Swiss Army Knife, and he uses it like a pencil, drawing lines onto white paper. These delicate cuts are barely visible. It is only when he applies colour – in his case, Caran d‘Ache pencils – that a work takes shape. “The technique allows for a certain amount of random spontaneity.”

“In the holidays, I would earn money raspberry and potato picking, but one of the other jobs I had was as a ‘roguer’. A ‘tattie roguer’ is someone employed by a farmer to walk through potato fields with a fork and a pile of sacks. He digs out and destroys any rogue varieties of potato or any plant that looks diseased.

“Believe it or not, I was trained to identify almost 50 different species of potato plant!”

In conversation, Marr slips from one group of knowledgeable facts to another with ease, and it’s the same in his work life. If he’s not juggling at least half a dozen projects at any one time, he’s not satisfied. When you’re chatting to him, it is also easy to forget that nine years ago he had a major stroke, leaving one side of his body near-paralysed. And he won’t raise the subject unless you do.

“Without sounding self-pitying, I am now hemiplegic, so one side of my body doesn’t work. Any activity that is really physical is difficult for me. I can walk, but I’m wobbly, and I can fall. Unfortunately, it also means I can’t dash out of the front door with my easel and paints.”

Despite the physical limitations, one thing the stroke did unleash was a need to dive into abstraction. “Before the stroke, my work was more representational. After it, I started to paint in a more free, abstract way. Perhaps the two are linked. It’s a style I’ve always loved in other artists but shied away from myself because I hadn’t been to art college. The stroke eliminated all my artistic inhibitions.”

Holding an exhibition, however, is a bold move for anyone. In the last few years, Marr has had more than half a dozen. Was he ever afraid of being mocked for straying outside journalistic boundaries? “Oh, yes,” he nods. “I was ready for the inevitable, ‘Ha, ha! So, he thinks he can paint, too.’ But I’m big enough to take it.

“I just think we’ve all got different sides to us, and this is just another side to me. I’m definitely back to causing trouble again with the day job, but I’m a very gentle creature underneath it all. Maybe that’s where the art comes in.”

Being an artist is a job for life and something tells me that Andrew Marr is in it for the long haul.