St James Piccadilly is one of the best loved churches in London. It is the perfect pairing for a new installation by the artist Arabella Dorman. The congregation describe themselves as seeking to be inclusive, welcoming and adventurous, while their Rector, Revd Lucy Winkett, Chaplain to the Royal Academy of Arts, suggests that the ‘ungovernable and wholly independent spiritual reality that Christians call God, the generative presence that underpins the universe is the same spirit that inspires and invigorates the artist inside all of us who will not be told what to do or what to believe and who treasures our most precious human characteristic; imagination.’

‘Art has often been a way of expressing something profound about faith.’

As a result, it is no surprise to find the Arts as a significant contributor to the ministry which is undertaken in and from St James’ or to find that it has been the location for a series of innovative and provocative art installations, often during the major Christian festivals. I visited recently to see their latest installation, Suspension by Arabella Dorman, but their commitment to visual art is such that it was also possible to see the rawest set of nativity figures I have ever viewed and eight massive masterfully mysterious stone heads by Emily Young.

The nativity figures were commissioned in 2012 using wood from a Catalpa tree that had stood in the church courtyard for over 80 years. The congregation were stunned by ‘earthy, tactile and insistent’ images that wood carver Clinton Chaloner created. They are displayed and used as part of liturgy each year from Advent Sunday and through Advent, Christmas and Epiphany.

In her, work Young seeks ‘to bring the natural beauty and energy of stone, including its capacity to embody human consciousness, to the fore.’ Her sculptures derive from and highlight the unique geological history and geographical source of each individual stone carved. She produces work which marries the contemporary with the ancient, while foregrounding her constant preoccupation with the troubled relationship that we have, as human beings, with the planet. Both her stone heads and Chaloner’s wooden nativity figures create a commonality of poetry and presence across time, land and cultures in a way that connects an ancient faith and building with a contemporary context and ministry. 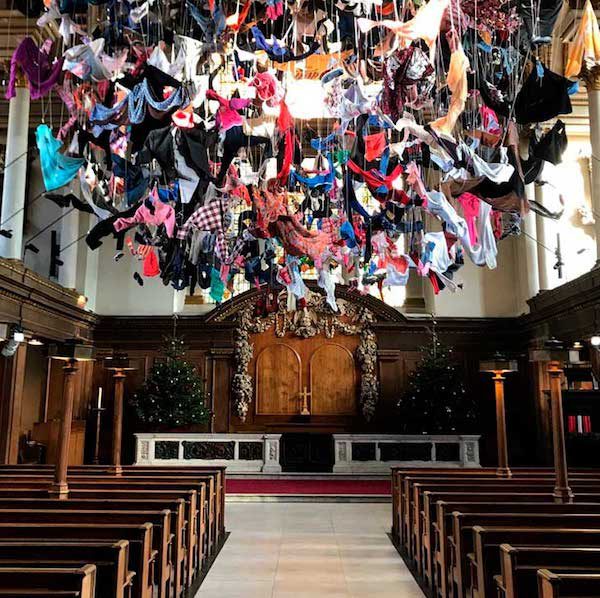 Winkett has said that, for Christians, ‘art has often been a way of expressing something profound about faith.’ The spiritual link, she suggests, goes something like this; ‘if you experience something exquisite, something beautiful, something that is itself a window into eternity, then what we can see points us to, reminds us of, the God we cannot see.’

At the same time, however, she believes that ‘Christianity is a faith that really does try to name some dark truths and grapple with some murky stuff.’ In artistic terms, she suggests the gospels paint ‘a picture of Jesus’s life that expresses not just beauty but horror.’ These are truthful gospels that insist ‘on facing the most troubling, the most frightening, the most shameful, regretful realities of violence and cruelty in the world.’ But in facing those persistent realities, she argues, ‘does not abandon us for them to dominate us or destroy us, but dares to address them insisting in the end that life transforms death, that love is stronger than hate, that beauty transfigures horror.’

The installations that have been commissioned by the church, beginning in 2013, have connected more expressly to this aspect of Christian faith and to contemporary issues and action, as part of the congregation’s ‘common commitment to be in solidarity with poor and marginalised people and to cherish Creation.’ Artists with whom they have worked include Justin Butcher, Arabella Dorman, Isaam Kourbaj, Sara Mark and Anna Sikorska and the installations range from an 8 metre high recreation of the Separation Wall that surrounds Bethlehem to an ice melt sculpture placed disruptively at the entrance to the sanctuary the sound of which was audible throughout services, by way of a Syrian refugee ‘camp’ constructed out of waste materials, such as medicine packaging and discarded books.

The current installation Suspension follows an earlier installation entitled Flight by Dorman, both of which seek to highlight the plight of the 21 million refugees worldwide through the bringing to London from Lesvos objects used by refugees. For Flight Dorman hung a 30’ inflatable dinghy in the nave tilting it towards the altar, as though in danger of imminent capsize, while illuminating it with rippling light. Two adult life jackets, and one child’s, evoking the flight of the Holy Family to Egypt, were suspended from it.

In the two years since Flight, thousands more refugees have continued to flee war, persecution and famine for the hoped-for safety of European shores, deepening what has become the worst humanitarian crisis since World War Two. Composed of hundreds of items of clothing that have been discarded by refugees upon their arrival on the island of Lesvos, Suspended seeks to highlight the plight of refugees who are stranded in cities and detention centres across Europe – men, women and children hung between loss and hope, suspended between a past to which they cannot return, and a future to which they cannot move forward.

In its use of discarded clothing to raise awareness of the refugee crisis, this installation has synergies with Sea of Colour, 2016 by Güler Ates, which was displayed at the Salvation Army International Headquarters as part of an exhibition of Stations of the Cross in 14 locations across London. In Ates work, the castoff clothes, offering a haunting reminder of children who have died, were stitched onto a large piece of cloth and people invited to write or draw on the clothes to reflect on the work and the tragic events it recalled.

Dorman’s installation, however, is hung, like Flight, in the nave of St James’, forming a visual equivalent for the stasis, limbo and suspension in which those who have discarded these clothes now find themselves. Grouped together to form a huge globe (symbolic of a world in every 113 people are refugees) with a pulsing orb of light at its centre, the clothes which form Suspension are themselves a poignant evocation of those who wore them; an effect heightened by groupings which suggest children or children and parents holding hands. The central light which glows and fades suggests the fluctuating nature of hope for those caught in this situation; a hope which ultimately depends on our response and welcome.

Winkett states that: ‘One of the church’s roles in situations of injustice is to “create witness”. To encourage one another to become people who are willing to see, not to look away, and then speak about hidden suffering, by making visible what is not visible to most. At Christmas, we tell stories of Jesus becoming a refugee. At the festival of the incarnation, we sing about Jesus being clothed humanity, “veiled in the flesh”. This is a way of seeing Christ in all people who are rootless and far from home. And being willing ourselves to become “clothed in compassion”.’