Alexander de Cadenet’s series of bronze and silver sculptures featuring ‘consumables’ contain a deeper spiritual message. This includes his ‘Life-Burger’ hamburger sculptures and ‘Creation’ – a large scale shiny bronze apple with three bites taken from it – two adult bites and baby bite in between.‘Creation’ explores the mysterious process of creativity – of how both a human being and an artwork come into existence. Alex states, “In Genesis, we were told by God not to take a bite from the apple, yet it was by taking a bite that we became ‘self-conscious’ and self-consciousness is what is necessary for making art”.

The ‘Life-Burger’ sculptures explore the relationship between the spiritual dimension of art and consumerism and, at their root, are an exploration of what gives life meaning. Art historian Edward Lucie-Smith has written, “The Life-Burgers offer a sharp critique of the society we live in and yet simultaneously they are luxury objects in their own right”.

L.A. art critic Peter Frank takes a similar line when he writes, “We’re at a moment in modern history where the excess has gotten staggeringly wretched. Oligarchs worldwide shock us and shame themselves with their conspicuous consumption — a consumption that extends to the rest of us, as consumed no less than as consumers. Alexander de Cadenet encapsulates this emerging neo-feudal order in his gilded and multi-decked burgers. For the mega-rich, the world is their fast food joint, and their appetite insatiable. Over 3.6 billion sold!”

In October Alex will exhibit ‘Creation’ and a selection of ‘Life-Burgers’ at St Stephen Walbrook, where we will also host a conference, organised in partnership with Alex and Watkins Mind Body Spirit Magazine, that will explore the relationship between art and the spiritual dimension. The conference takes words spoken by Eckhart Tolle in an interview with Alex as inspiration, ”True art can play an important part in the awakening of humanity.”

Alex has said that “Being an artist is about having a voice in the world, a pure and authentic voice in a challenging world. It is a way of sharing personal insights and encounters with the world, of exploring the mysteries of our existence and our place in the grand scheme. Art is the intersection between the formless dimension and the world of form; it embodies our connection to nature or the intelligence that is responsible for our existences.”

He has recently founded Awakened Artists; a platform to showcase specially invited artists whose work accesses a deeper spiritual dimension. Awakened Artists is an international community of visual artists who believe that the production of art is a spiritual act and contributes towards the evolving consciousness of those that create it and also those that experience it. On the back of these initiatives, I wanted to find out more about his understanding of art as a way of exploring what gives life a deeper meaning and how this has evolved in relation to his own life journey. 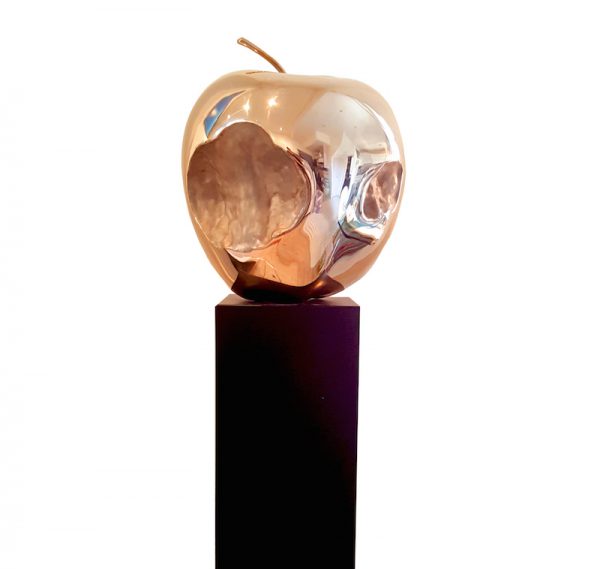 JE: Your recent works playfully critique consumer and celebrity culture while using elements of those cultures to do so. To what extent do you see yourself as an insider or an outsider to those cultures?

ADC: I grew up exposed to these values and it has been valuable for me in some ways – as a yardstick by which to compare things to and also given me insights into the darker aspects of it.

JE: What we consume and how we do so seem major preoccupations of the ‘Life Burgers’ and of ‘Creation’. What seems problematic about consumer culture?

ADC: What’s problematic is the desire to consume and accumulate for the sake of it – often to run away from pain or discomfort – beauty and pleasure can at some point become quite warped and grotesque without limits, where even the original value gets lost or diluted within excess. I think it’s become more and more prevalent in the world today and it’s also very much part of the art world system too in the way that artworks are commoditized and their original beauty can get lost in the transformation into status symbols.

JE: You have been called a playful moralist. What does that phrase mean to you?

ADC:  am conscious of my own ambivalent relationship to ‘morality’ – so hopefully any ‘moralizing’ is not done with self-righteousness but more as a way to explore and express the inherent paradoxes and richness of life.

JC: You reference the Genesis creation stories in your Meteorite sculpture series and the Memento Mori tradition with your ‘Life Burgers’. What influence has the Bible and Christianity had on your art?

ADC: Yes, I grew up with a close relationship with Jesus. I have sometimes referenced stories from the Bible with my artworks over the years. E.g. The ‘Eye of the Needle’ model, ‘30 Pieces of Silver’ or more recently the on-going series of apple sculptures. The Bible is part of a universal sub-conscious –is deeply infused with meaning, it’s a powerful, established language of spiritual symbolism that one can reference to communicate and express certain thoughts and feelings.

JE: You performed a singing bowl meditation before photographing your ‘Desert Flower’ series of photographs. What part does meditation play in your creative process?

ADC: In one sense, my artwork reflects the evolution of my own consciousness and the sorts of statements I’d like to share in the world. Meditation is a process of connecting to a deeper dimension of existence – a way of tuning into the deeper reality of our connection to Nature. Sometimes it can get you into a harmonious zone that is reflected in the work you produce while in a meditative state.

JE: You have begun a series of interviews with artists exploring the spiritual dimension in art. What would you say that you have learned from those interviews to date?

ADC: The process of interviewing others can enhance one’s own connection to that dimension, it also has a strong social element – a sense of kindred spirit with those who are interested in similar aspects of life.

JE: Have you been surprised by the number of artists for whom the spiritual dimension features strongly in their practice?

ADC: I think the earliest art forms had a really fundamental and deeply significant meaning for those that created them. The earliest cave paintings and bone or stone statuettes were infused with deep meaning for the societies that made them. It seems that there are a growing number of artists and creatives that wish to make something beyond being just surface decoration and something that can bring a deeper consciousness or awareness into people’s lives.

JE: You interviewed Eckhart Tolle as part of that series, which was a particular thrill for you personally. What has impressed you about Tolle’s writings and what stood out for you from the experience of meeting him?

ADC: Despite what he has achieved in the world, having status and ‘success’ is not what drives him. That is a by-product of his work. He certainly does not want power over others. He desires to share his experience of life, in order for others to become more aware, conscious and to connect to beauty and the joy of existence. There was a particular moment when I saw myself reflected in his eyes and I believe he saw himself reflected in mine. It is rare to be able to go to a place of such openness and acceptance like that, especially with an enlightened being and it touched my life.

JE: You will be exhibiting at St Stephen Walbrook in the autumn. Why do you think a church is an appropriate location to show your work?

ADC: This is a particularly beautiful space and it’s wonderful to show one’s art in this environment. This church also has a rich history of contemporary art. As this series of artworks offers reflection on life and being, I feel they have an affinity with what the church is all about.

JE: You are planning a conference on art and the spiritual dimension with the title ‘Art awakening humanity’, a phrase taken from Eckhart Tolle, and have begun a new grouping of artists called Awakened Artists. In what ways can art awaken humanity and why do you think humanity needs awakening?

ADC: Eckhart also said that “The true function of art is to awaken others” and I agree with that. You can invest into an artwork a deeper spiritual message – that is what the artists in the Awakened Artists group wish to achieve. Yes, there are a lot of problems at the moment in our society with deeply ingrained ignorant and even dangerous viewpoints that can cause suffering and harm to the planet and its occupants. As an artist, you have a voice to talk about the things that matter to you – a chance to have your say. Drawing things to people’s attention or offering insights can be helpful in combatting these behaviours.

JE: What do you hope the Awakened Artists group can achieve?

ADC: I’d like that it is a platform to bring together artists who would like to contribute to a shared vision of art as something that brings awareness and a deeper consciousness into those that experience it.

JE: How can art offer access to a deeper dimension of existence and contribute towards the evolution of consciousness?

ADC: Either experientially – like for example encountering the phenomenon of a James Turrell light installation or by offering insights into the issues we face today in such a way that genuinely moves people.

JE: Tell me a little about the work of David C. Greene, the first member of Awakened Artists. What is there about his work that fits the brief for this new group?

ADC: I find David’s work exceptionally authentic. I don’t know of any artist on the planet today who focuses on the beauty of the desert landscape at night and the phenomena that can be encountered there. I see his work is part of the heritage and tradition of Edward Hopper meets a bit of Georgia O’Keeffe – it’s about his personal life but has a deep connection to the beauty of nature. David Greene’s night time landscapes absorb you – you get transported there and cannot remain unaffected by the experience. Like Eckhart’s photos, his landscapes open our eyes to what is already there.

JE: The desert features in your work and that of David C. Greene. What part does the desert play in your spirituality?

ADC: One of my favourite lines in Eckhart’s ‘The Power of Now’ reads: “Presence is needed to become aware of the beauty, the majesty, the sacredness of nature. Have you ever gazed up into the infinity of space on a clear night, awestruck by the absolute stillness and inconceivable vastness of it?” This says a lot to me and if a piece of art can give a sense of this or be a signpost to look in this direction, I believe it has a great value to humanity, not just for people today but I think also for future generations.