Art Awakening Humanity was an afternoon of short talks and meditations organised by St Stephen Walbrook in partnership with Awakened Artists and Watkins Mind Body Spirit Magazine. The event included contributions from artists, collectors and spiritual teachers centred around the relationship between art and the spiritual dimension.

Opening this event with a discussion of modern art and spirituality, I suggested, using a quote from Vincent Van Gogh, that much modern art is sublime and sacred, yet this has not been widely acknowledged, while those who have been carried away by the vision of art as sacred have often not been understood and many have doubted whether their art is adequate to realise their vision.

“Much modern art is sublime and sacred, yet this has not been widely acknowledged” – Vincent Van Gogh

I used a brief survey of the extent to which, despite their problematic relationship, modern art and spirituality have informed each other to argue that spirituality has featured as an animating factor in many of the significant movements within modern art, that the number of artists actively engaging with spirituality in its various forms is legion, and that the literature relating to the relationship between modern art and spirituality deserves to grow and become more extensive than is currently the case.
Art historian Edward Lucie-Smith, who contributed an agnostic’s view of art and spirituality to the conference, has written that the influence of the visionary, by which he means the ability of the artist to separate himself or herself from all material considerations in pursuit of something envisaged or imagined, “has consistently been under-rated in accounts of 20th century art, which has been seen as the product of a quintessential materialist society.” His book on ‘Visionary Art’, by looking at both familiar and unfamiliar images, attempted to show that an altogether different approach is possible, and that “it is artists, both tutored and untutored, who have attempted to preserve a space for the transcendental in contemporary life.” 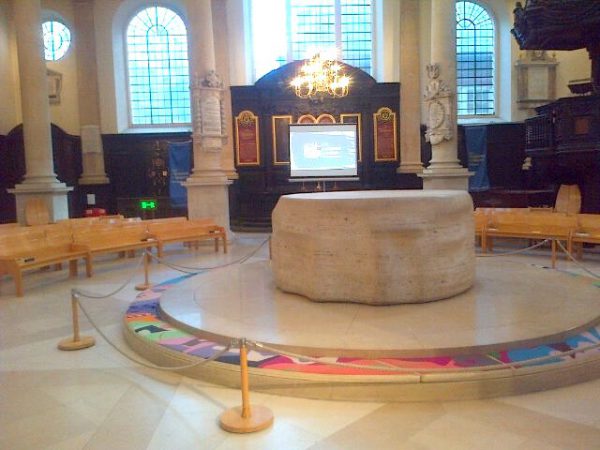 Roseline de Thélin, spoke personally about the theme of Art as a language of the soul with a key focus on art and wonder, is one such artist. Her talk explored her personal experience of how artistic expression offers a space for investigation, discovery, innovation and self-awareness, a space where human consciousness can see itself.
As a visual artist, she finds inspiration in astronomy, quantum physics, perceptions, subtle reality and the expansion of consciousness. The subject of light has been central in her artistic and philosophical inquiry. Combining a diversity of digital and hands-on media, she produces pieces that play with illusion and perceptions. She explores and combines a large diversity of media including optic fibers, mirrors, quartz crystals, perspex, metals, painting, collage, photography & video to create art that reflects her personal inquiry and transformation, but is known particularly for the unique work she developed with fiber optic, symbol of the endless possibilities carried by photons. Her Homos Luminosos light sculptures have been exhibited internationally and have received wide critical acclaim. In addition to being an interdisciplinary visual artist, De Thélin is also a creative coach and art therapist facilitating Art Retreats that foster creative investigation, discovery, innovation and self-awareness.

David Neita and Theresa Roberts discussed aspects of the Jamaican Spiritual exhibition which Theresa curated at St Stephen Walbrook in July 2017. Art Jamaica founder Theresa Roberts included mainly new work from young Jamaican artists in the show but also featured selected work from her own extensive collection. The show was made up of painting, sculpture and photography highlighting the strong spiritual nature of Jamaica and its people. While predominantly Christian, Jamaica is also home to a wide variety of religions which coexist peacefully; the variety of spiritual beliefs held on the island reflect the diverse nature of the people who live there and the motto of the country “Out of many we are one.” While spirituality was the overriding theme, the exhibition also offered a compelling insight into the diverse nature and vibrancy of modern Jamaica. In his response to the exhibition, David Neita noted that “spirituality seeps into every crevice of Jamaican life and the life-giving force of that spirituality exploded with an infusion of inspiration in this exhibition.”

Jonathan Kearney showed examples of a wide range of digital art in discussing Art, Theology and The Digital. He has stated that “the opportunities digital art creates to cross boundaries, both conceptual and literal, are enormous.” As a result, we are “only just beginning to explore the space for work beyond the usual art hegemonies.” He has described this regarding being “a new landscape” or “a new planet” where “the rules of physics don’t quite match on.” In this new environment, we need ‘cyber sages’, “people with wisdom, who could help shape and direct.” People with “an almost explorer mentality to go running into it, and play with it, explore it, feed back and say ‘this is what we’ve found.’”
For nine years, Kearney has pioneered the opportunity to study a Fine Art masters course online. This innovative approach to learning is backed by his research and experimentation, which shows how digital tools can enhance both learning and art practice. He is fascinated by the intersection of art, theology and the digital and has extensive experience of exhibiting his work worldwide, with recent exhibitions having been seen in China, Brazil and London.

Mark Dean told his personal story of partial salvation through art before discussing the Esoteric in Art. After studying photography and painting in the 1970’s, and playing in bands in the 1980’s, Dean began working with appropriated film and music to produce looped video and sound works. Dean says that: “As an artist, I do not seek to make images of God but rather the representation of personhood; that is, the experience of being a person in a world where there is a God. This world is not easy, and there are experiences of trauma and isolation, but God (and thus the created world) is good, and so there is beauty and the hope of redemption.”

He notes that “The late critic Stuart Morgan once said to me that the problem with the Modernist engagement with spirituality wasn’t that it wasn’t real, but that it was somehow exclusive – as though only artists were privy to the spirituality that generated creativity.” “Understanding the working of the Holy Spirit throughout the world,” he suggests, “helps us to avoid that kind of elitism, which can be understood as a form of Gnosticism.” As a result, he has “been quite sceptical of contemporary art in churches”: “I’m not interested in the idea of churches treated like funky gallery spaces, nor in the idea of art as a kind of cultural loss leader to get people into cathedrals etc. But it’s easy to be critical, and less easy to do something about that critique.” 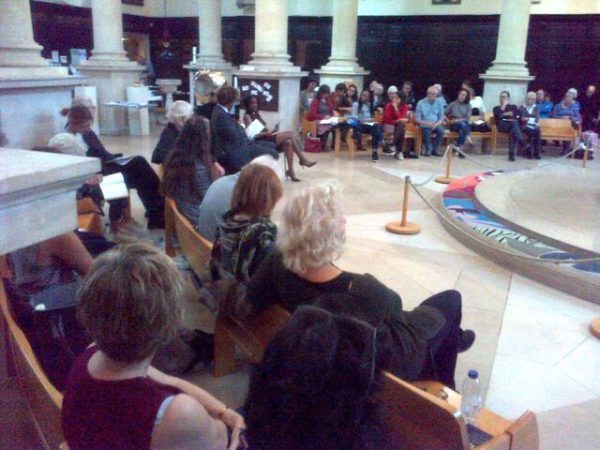 Jonathan Koestlé-Cate specifically probed the conference title for understanding in his presentation, utilising works by Bruce Nauman, Alice Neel, Jonathan Monk and Alejandro Tobon Rojas. In doing so. Koestlé-Cate says, “I have followed closely the church’s increasing willingness to work with contemporary artists and to deploy modern media within its spaces. I have since become a regular contributor to debates on the relationship of Christianity and the visual arts, taking a particular interest in the role of modern and contemporary art in ecclesiastical spaces, but also the wider presence of themes of religion, spirituality and the sacred within the art world more generally”.

He highlighted the contention of Jacques Maritain that, “… the first duty of the artist … is to be unshakably faithful to his own truth” and noted David Torevell’s suggestion that, “Art has this capacity to disclose, to show glimpses of truth or reveal moments of beauty or goodness which would otherwise remain concealed.” Jasper Johns had said that “One hopes for something resembling truth, some sense of life, even of grace, to flicker, at least, in the work.” Roberta Bernstein writes that: “Through his work, [Johns] has sought to challenge the notion of ‘truth’, suggesting that it is not a given, but rather something that can exist beneath layered and shifting meanings. Routine ways of seeing, feeling and thinking render truth elusive, but when the senses are awakened, a flicker of grace occurs and new ways of experiencing the world allow us to glimpse it.”

Alexander de Cadenet shared an extract of his interview with Eckhart Tolle for Watkins Mind Body Spirit Magazine, from which the conference title had been derived, and also spoke about the newly formed Awakened Artists Group before ending with a singing bowl meditation. It was in September 2016 that Alexander de Cadenet was invited to meet with Tolle, in his home town of Vancouver, to explore his perspective on the relationship between art and the spiritual dimension. They explored how this related to Tolle’s own practice as one of the world’s foremost spiritual teachers and an amateur photographer. It was a joyful, life-enhancing encounter, filled with profound insights into the deeper, spiritual dimension of art and the mysteries of creativity. Tolle stated in the interview that: “True art can play an important part in the awakening of humanity. Beauty arises when something more essential or deeper, something that underlies the world of sense perception shines through. It is what I call the ‘underlying Intelligence’ that is the organizing principle behind the world of form, a hidden harmony, as it were”.

De Cadenet says, “For me, art is way of exploring what gives life a deeper meaning and evolves in relation to my own life journey. Being an artist is about having a voice in the world, a pure and authentic voice in a challenging world. It is a way of sharing personal insights and encounters with the world, of exploring the mysteries of our existence and our place in the grand scheme. Art is the intersection between the formless dimension and the world of form; it embodies our connection to nature or the intelligence that is responsible for our existences.”

De Cadenet agrees that the true function of art is to awaken others, saying: “You can invest into an artwork a deeper spiritual message – that is what the artists in the Awakened Artists group wish to achieve. Yes, there are a lot of problems at the moment in our society with deeply ingrained ignorant and even dangerous viewpoints that can cause suffering and harm to the planet and its occupants. As an artist, you have a voice to talk about the things that matter to you – a chance to have your say. Drawing things to people’s attention or offering insights can be helpful in combatting these behaviours.”

The conference, therefore, offered a wide range of perspectives on the theme of art awakening humanity. Participants described the event as: “Wonderful day of talks and lectures”, “Wonderful, inspirational” and “Spiritually uplifting conference.”