Art Basel Miami is the world’s largest and perhaps the most important art event in the world. It opened yesterday and takes place at the Miami Beach Convention Centre, all this week. The global art scene, collectors, galleries, celebrities and well-known banks have arrived in glittering Miami, taking over every decent hotel and Airbnb room. Here is the Artlyst verdict. The main fair this year is too large for covering in one day so plan two or three to see everything and wear comfortable shoes.

Art Basel works on a tiered system. Expect that no matter what level of VIP card you have, like airline priority cards there is always one up from the level you are on. I have a VIP card this year, but so did everyone else yesterday so there wasn’t a seat to be had in the VIP lounge. Spotted Barbara Streisand, John Baldessari, Yoko Ono, Jay Jopling and Larry Gagosian actually on their stands.

There was great art to see and leading British galleries were in abundance.  However, surprisingly there was no British gallery representation in either the Nova sector dedicated to works created within the last three years or in Positions which spotlights a single artist with one project.

Overall, it is a safe fair this year with fewer bling pieces to distract and galleries bringing out their big hitters.  Victoria Miro had a Kusama Pumpkin and infinity room plus Doug Aitken ‘End’; Annely Juda a large David Hockney video mosaic; Gagosian had a giant Jeff Koons sapphire ring; White Cube in its natural hued stand featured Damien Hirst, Antony Gormley, Virginia Overton and more; Hauser & Wirth had Cy Twombly, Louise Bourgeois and Lygia Pape installation. It would be a lot easier to navigate the fair if Modern was separated from contemporary as it now is with Frieze and Frieze Masters. 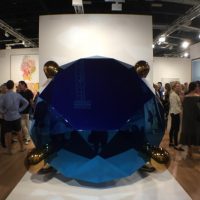 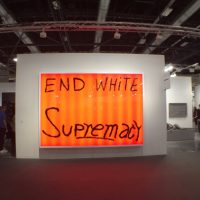 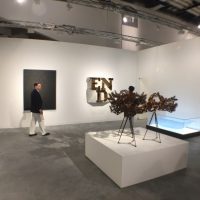 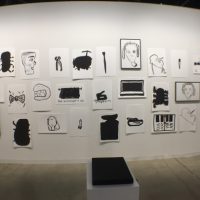 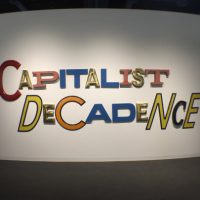 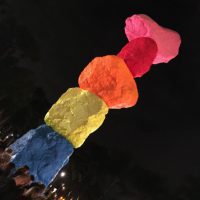 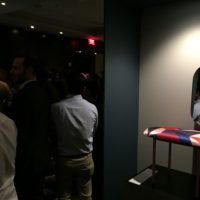 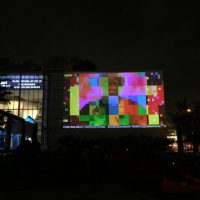 The work extends Rondinone’s long-running interest in natural phenomena and their reformulation in art. The new sculpture is the newest addition to the museum’s permanent collection, commissioned and acquired through The Bass Acquisition Fund, and part of the museum’s most recent acquisition initiative dedicated to international contemporary art.

“Art has the power to inspire and activate a community,” comments Executive Director Silvia Karman Cubiñá. “With Miami Mountain, The Bass presents our collection beyond the walls of the museum, to be enjoyed by Miami Beach residents and visitors, and to engage with every passerby.” Miami Mountain is one of the most exciting piece of public art ever unveiled in Miami Beach! The positive response on social media has been overwhelming.

Artlyst also attended the Wallpaper 20th anniversary party at the W Hotel. It was all about design but a bit thin on the ground presenting cutting edge design. Leave this up to Design Miami which we are visiting tomorrow.

We ended the evening by chilling in a beanbag chair at Film Basel in Soundscape Park where a number of sound-centric films  curated by Londoner David Gryn were on view to everyone.