Visiting Art Brussels 2019 and Brussels Art Week is always a feast. First of all, you have a top-rate art fair, one of the oldest Contemporary Art Fairs on the planet. Then you have some of the best galleries in the world opening their doors to the public for a personable art-night-out experience, the day before the fair’s PV. 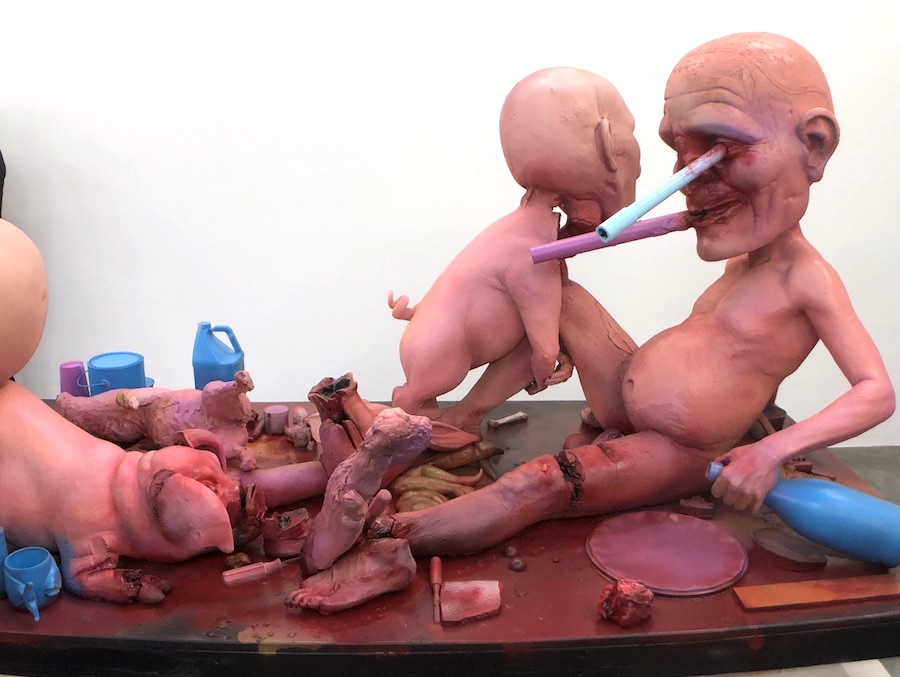 My first stop was the solo exhibition of Paul McCarthy at Xavier Hufkens who presented a number of sculptures, paintings and video work by the American artist. The show was displayed across both gallery spaces. The exhibition comprised works from three of McCarthy’s most important video performance installations of the last two decades: CP (Caribbean Pirates), WS (White Snow) and CSSC (Coach Stage Stage Coach) / DADDA (Donald And Daisy Duck Adventure).

Onto the fair – Here are ten of the best stands found at Art Brussels: Watch This Slide Show

I always see something groundbreaking in Brussels and the warm welcome from the local art scene is genuine and enthusiastic.

This year, I visited the Fine Arts Museum Brussels which contains gallery space above and below ground level. Besides seeing the most extensive collection of the Belgian artist Rene Magritte, there were three notable exhibitions. 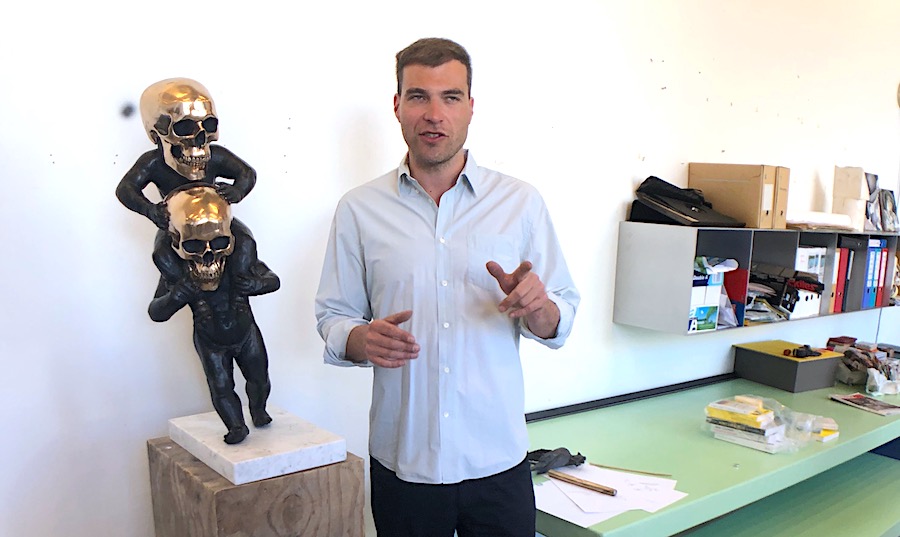 Thomas Lerooy, a local sculptor who has shown work at London’s AVA Gallery. His figurative bronze work appropriates from classical sculpture and Nature Morte I visited his studio earlier in the day and was impressed with what I saw. 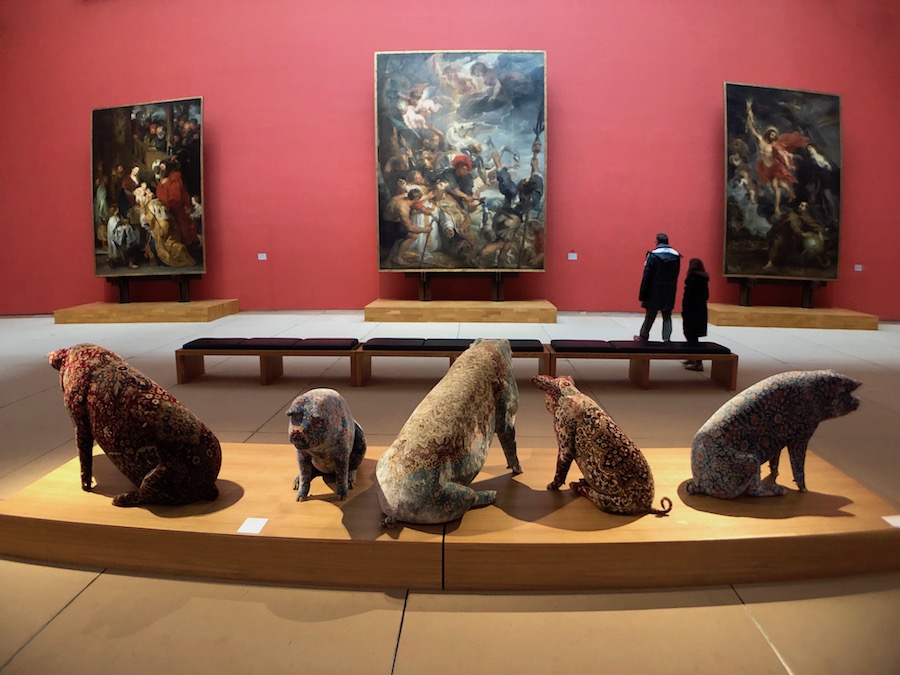 The second contemporary exhibiting was Wim Delvoye who is known for his tattooed pig carcasses, and religious iconography ranging from Christian imagery to Islamic themes. 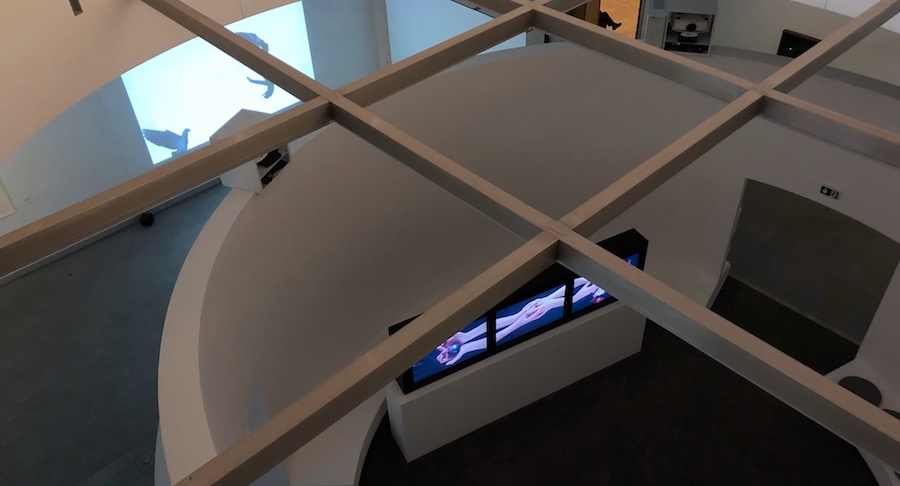 The third artist was Agnes Guillaume who works in video and mixed mediums. Her video of jellyfish reminds me of Georges Méliès meets Bill Viola- impressive. 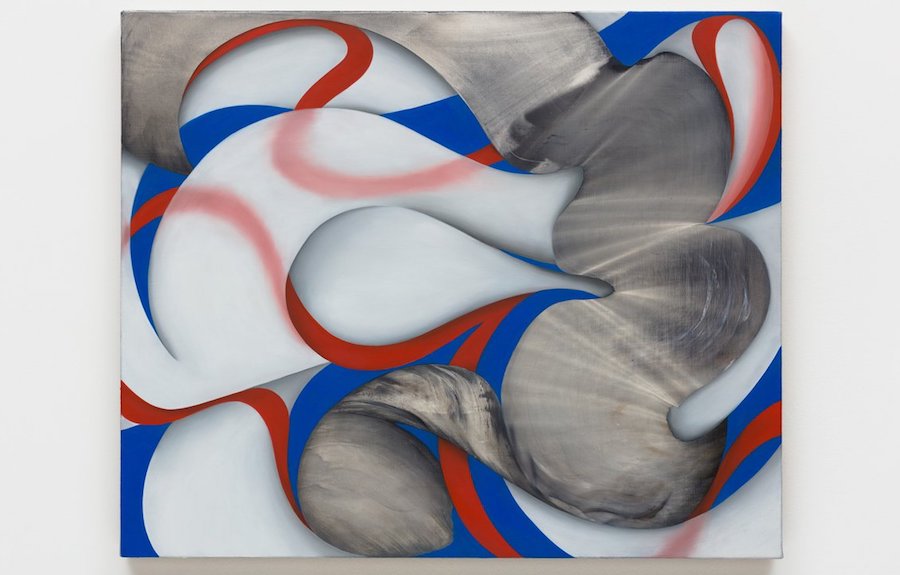 Back To Art Brussels – The winner of the SOLO Prize at the fair was Lesley Vance represented by Xavier Hufkens, Brussels.

“The jury was impressed by the finely balanced selection of paintings that within their modest scale demonstrate an inventive and rigorous approach to abstraction. This involves the process of composing natural elements and studying living forms to expose the energy that binds them. The jury was left questioning how abstraction today seeks to do away with the unnecessary or the overpowering while taking pleasure in reinventing the second dimension.” Chris Dercon, Vanessa Joan Müller and Monika Szewczyk. 25 April 2019. 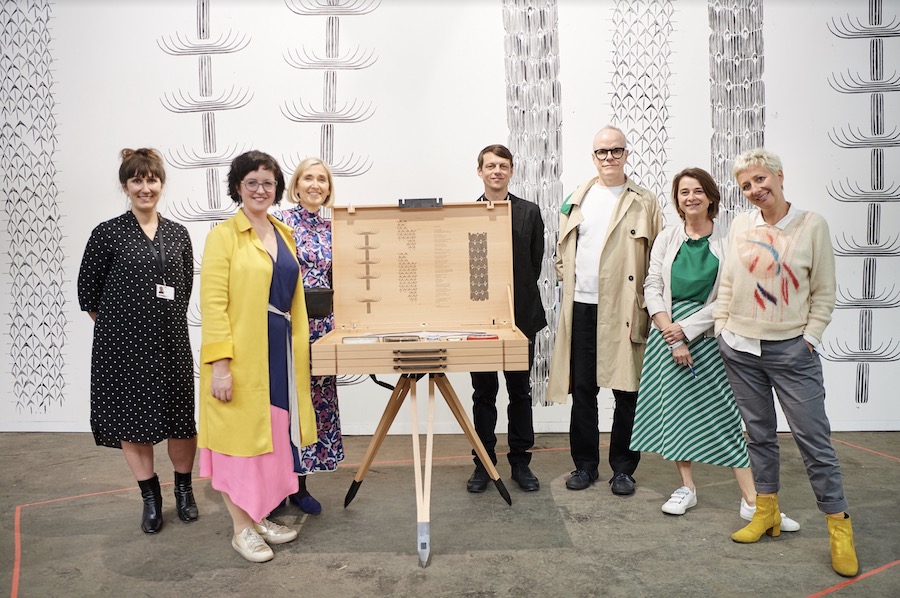 The Winners of the Discovery Prize are tegenboschvanvreden, Amsterdam with Sander Breure & Witte van Hulzen and NOME, Berlin with Goldin+Senneby.

The best DISCOVERY stand in the fair is rewarded with the DISCOVERY Prize of 5000 euros.

“These two galleries present artists who are collaborative in their practice, both reaching outside the sphere of the art world while anchoring art within society. Both practices are multidisciplinary through various means such as rumour, horticulture, collecting, and public interference.

Within Sandre Breure and Witte van Hulzen’s practice is ongoing research into human behaviour, how it is coded and how it evolves over time. The sculptures are born of a 6 month long performance created by the artists in Utrecht train station, How can we know the Dancer from the Dance. Goldin+Senneby are also a collaborative artist duo. The work presented at Art Brussels addresses issues of ecology and economy. The artists excavate the idea of land ownership and cultivation, extracting carbon deposits and transforming this former plant matter into wall drawings.

Infiltrating the public sphere and graffitiing art onto distinct parts of society – mass transit sites and rural land ownership, these artists remind us of the wider impact of art in the world.” Tessa Giblin, Hans Ulrich Obrist and Helene Vandenberghe. 25 April 2019. 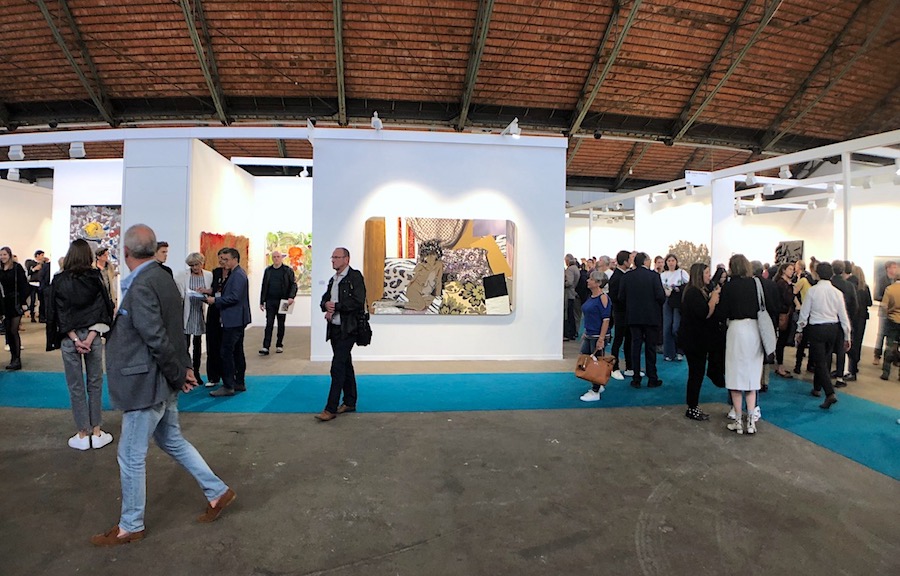 Xavier Hufkens (Brussels) sold out their solo booth of works by Lesley Vance (who won the DISCOVERY prize.

Rodolphe Janssen (Brussels) sold 4 works by Thomas Lerooy, who also just opened a new solo exhibition at the Royal Museums of Fine Arts of Belgium. As well as works by Louisa Gagliardi, Douglas Eynon, Marcel Berlanger, Betty Tompkins, Gert & Uwe Tobias and all the works by Sanam Khatibi. Range of sold works between €6,000 and €55,000.
HdM (Beijing, London) sold several pieces and said, “apart from meeting bold collectors, a section like ‘Discovery’ at Art Brussels gives me a view of emerging talent outside of China.” Hadrien de Montferrand, Director 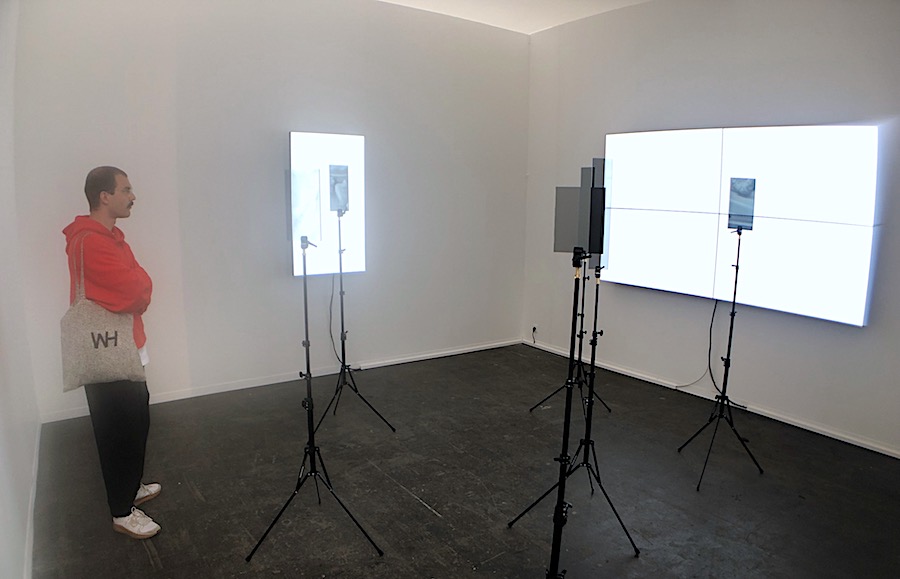 Harlan Levey Projects (Brussels) sold 20 works across all the six artists that were represented in their booth. “The first hours of Art Brussels are always of great interest. This year we were fortunate to place a large immersive installation by Emmanuel Van der Auwera as well as paintings by Marcin Dudek, TR Ericsson and Andrea Eva Gyori by the close of the first day. We also placed three sculptural works by Haseeb Ahmed and drawings by Amelie Bouvier. In addition to good business, we were thrilled by the new contacts we made and the number of institutional curators who visited our booth. Art Brussels once again showed how classy, cool and qualitative a fair can be.” – Harlan Levey, Director

Ditesheim & Maffei Fine Art (Neuchâtel) sold an entire series made up of 15 Heimo Zobernig pieces and said “we were impressed with the level of art knowledge of the people we met and enjoyed conversations with collectors who showed real interest in the art”. 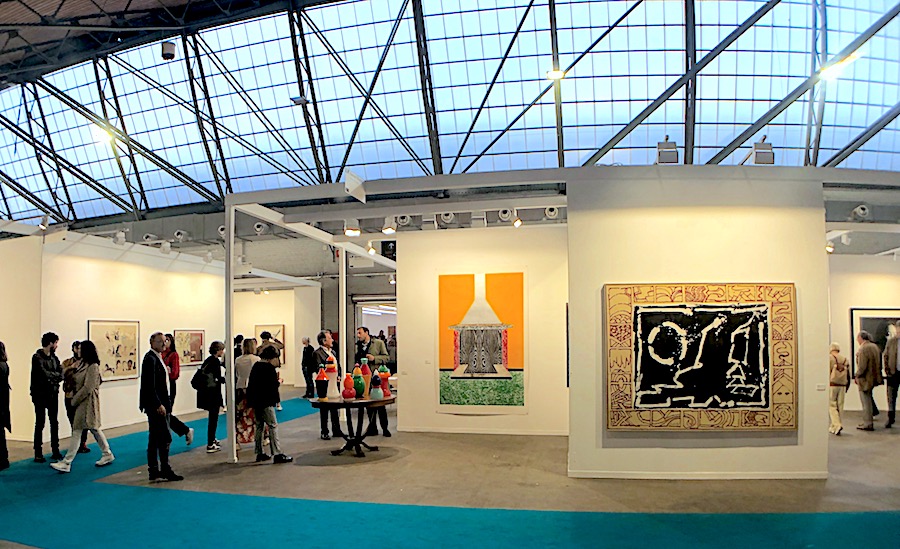 Lelong & Co (Paris/New York) said “we are extremely satisfied, we love Art Brussels, it was our best participation yet at the fair with very strong sales”

Les Filles du Calvaire (Paris) sold very well and were impressed by the calibre of visitors and came away with many new contacts.

Zeno X (Antwerp) reported sales of Mircea Suciu, Mark Manders and Marina Rheingantz, among others. Gallery Director Benedicte Goesaert stated, “You are challenged as a collector at Art Brussels”

The Hole (New York) returned for a sixth year to participate in Art Brussels, reported very strong sales, almost selling out their booth. Their SOLO booth of works by Jonathan Chapline sold out, with a price range of $4,000 – $30,000 as well as notable sales including pieces by Eric Shaw and Alex Gardner.

Nadja Vilenne (Liege) sold very well including three large works, two of which sold to major institutions. In the past 10 years of participating they reported that 2019 was their best year yet at the fair.

Hakgojae (Seoul) are participating in Art Brussels for the first time this year, reported very good sales including all eight of Kim Hyunsik’s Who Likes… series. 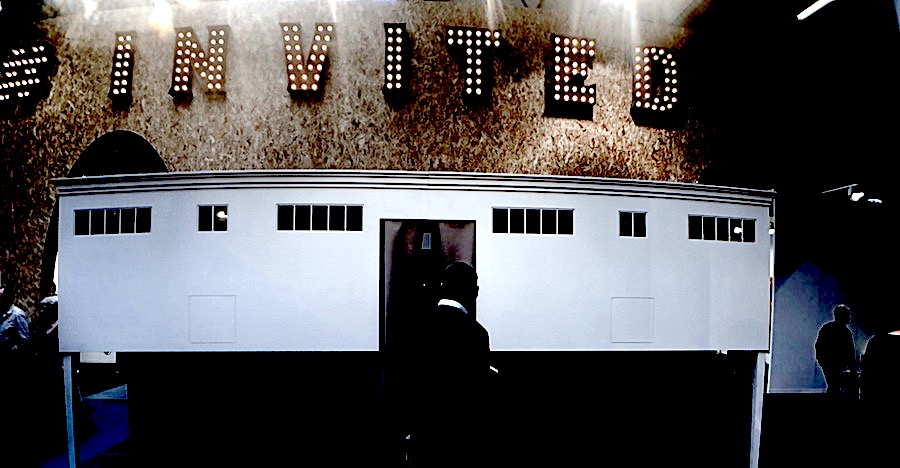 INVITED
Counter Space (Zurich) sold six works by art student Antoinette d’Ansembourg in the price range of €1,300. Including a piece by Sebastian Utzni to Alain Servais.

Paid by the artist (Brussels) sold numerous works – “an opportunity that has paid off, we are very grateful to Art Brussels for this platform” Yannick Ganseman and Simon Delobel
Alice Black (London) enjoyed several significant sales.

“Great first day of sales. Our participation payed off, the traffic in the fair was phenomenal. The collectors at Art Brussels are decisive, knowledgeable and their approach is well though through, the work we showed was really appreciated” Alice Black, Co-Founder

Derouillon (Paris) sold out the entire booth by Friday afternoon. 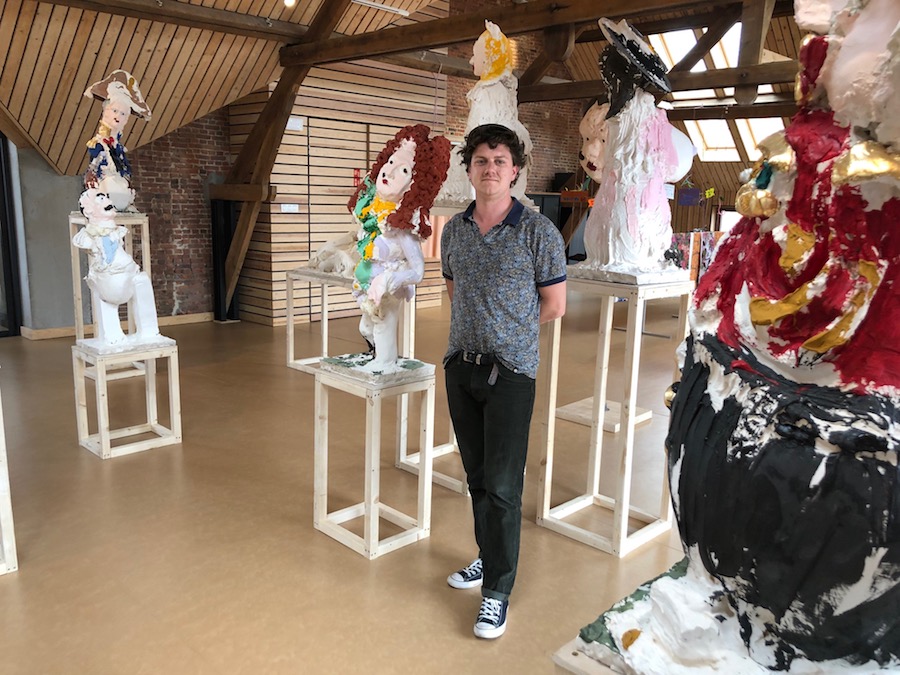 I also visited the week’s only satellite fair ‘Propositions’ which always is worthwhile. This rough and ready fair was conceived as an experiment within the art fair format, POPPOSITIONS encourages experimental and innovative approaches to the art market, while promoting acquisition. The fair takes the shape of a curated exhibition and ongoing critical dialogue. Considering the difficulties emerging galleries and art organisations are encountering, POPPOSITIONS adapts its business model; with its low participation fee, it offers a sufficient answer to the current art market climate.

Other Exhibitions Around Town 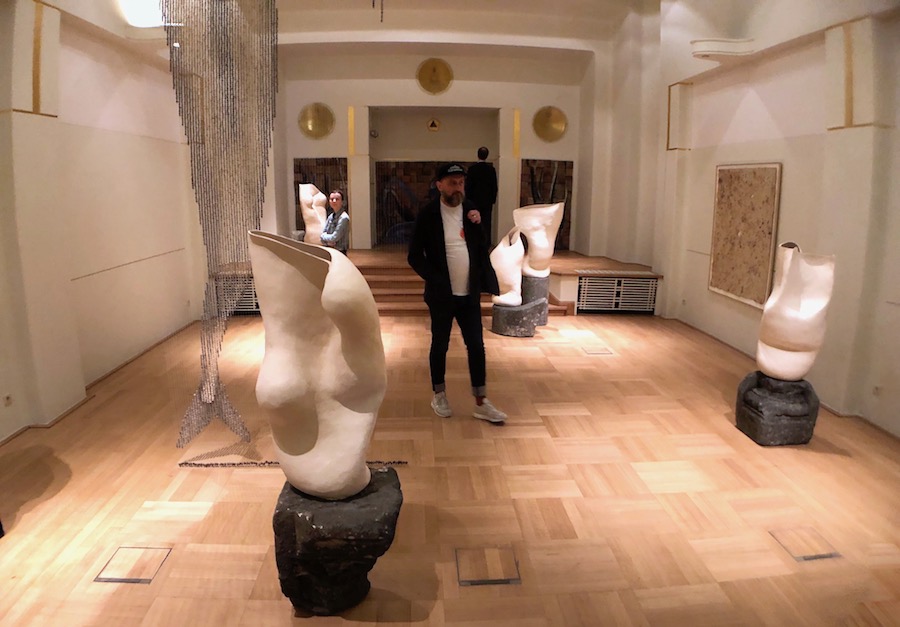 Zoe Paul is an Anglo/Greek sculptor who works in clay to produce figurative installations. They can be seen at La Loge until 29 June. 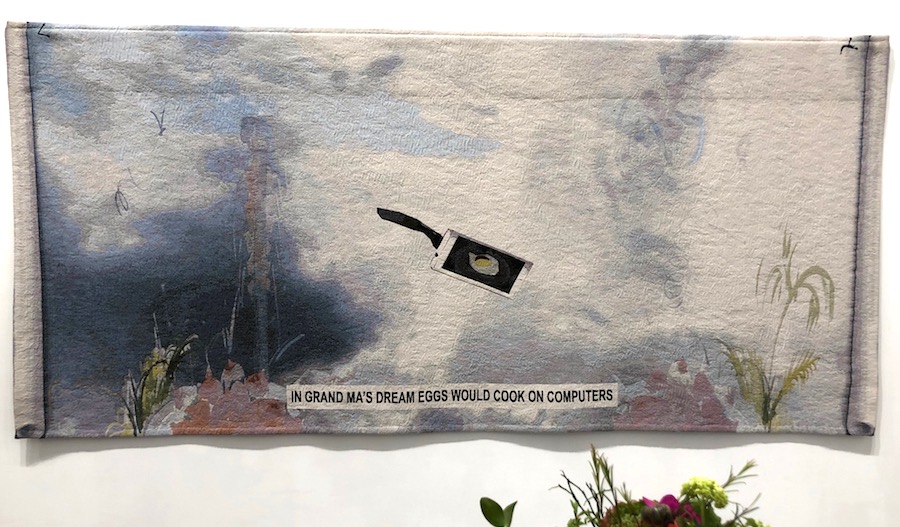 Laure Prouvost At Gallery Nathalie Obadia Brussels this is actually a group show which includes some outstanding paintings and tapestries by the Turner Prize-winning artist. Laure Prouvost  is representing France at this year’s Venice Biennale.