The Art and Christianity Awards are one of the more positive legacies of the new millennium, being set up in 2003 to draw attention to the abundance of creative responses to the Year 2000. Although the first round of awards only invited entries from churches and cathedrals, now they celebrate the successes and diversity of artistic projects in religious buildings of all faith traditions throughout Britain. The Awards continue to demonstrate that commissioning new art and architecture is an emphatically positive and outward-looking step to take.

Previous winners of the Awards have included Tracey Emin, Stephen Cox, Rose Finn-Kelcey, Maciej Urbanek and Alison Watt. In 2005 an Award was also introduced for a book that makes an outstanding contribution to the dialogue between visual arts and religious faith, opening up a new international dimension to the Awards. The Awards are organised by Art and Christianity which seeks to foster and explore the dialogue between art, Christianity and other religious faiths. Initially the Awards were run biennially but now they have a cycle of four years. 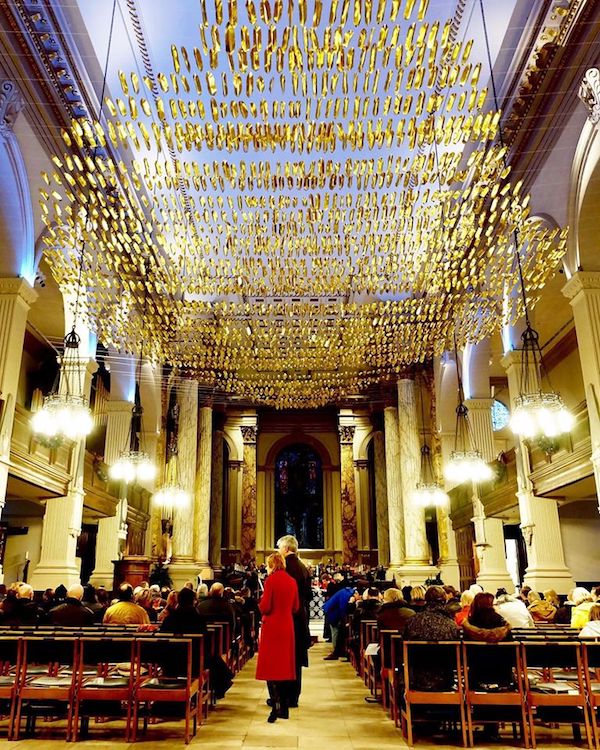 The winners of the 2019 Awards were announced on 13 November at the Bishopsgate Institute by the Chairs of the two Judging Panels, Olivia Horsfall Turner, Senior Curator at the V&A, writer and broadcaster, and Sir Charles Saumarez Smith, Senior Director of Blain | Southern gallery.

For the first time, the Award for art in a religious context was judged in two categories, one for temporary installations and exhibitions, one for permanent new commissions. This allowed for a greater distinction between the two disciplines, while highlighting the merit of artists and places of worship working together in ways which benefit their own needs and contexts. The Award’s criteria called for an exemplary relationship between the artwork and its context as well as the artwork’s capacity to engage in the particular modes of worship and activities taking place. High aesthetic sense and sound theological interpretation have been among the factors consistently applied to each award by the independent judging panels.

The Award for a temporary installation went to Jake Lever for ‘Soul Boats’ at Birmingham Cathedral from 2015-2016. Lever’s project worked with 2,000 participants within the Birmingham community – individuals of all faiths and world views – who were invited to reflect upon their journey through life by creating individual ‘soul boats’. The inside of each boat was lovingly crafted using significant words and images, a heartfelt expression of its maker’s inner life. Hung as one boat-shaped flotilla in the nave, these boats, as the Very Reverend Catherine Ogle said, “floated above worshippers, visitors, staff and those who wandered in, as a great prayer from the people of the city. The unseen thoughts and prayers were honoured within the privacy of the boats, lifted up by God”.

Stephen Owen, with his work ‘Prayer Chapel Communion Table and Lectern’ situated in Guildford Baptist Church from 2016, won the Award for a permanent commission. Owen describes his pieces as “spiritual metaphors in sculptural form”. Each piece speaks of “redemption, as seen in the change from their textured bases, to their highly finished surfaces.”

Carved in the shape of a cross, Owen’s lectern has a large nail driven through its base, a sharp reminder of the pain Christ bore. At the base of the cross are gaps into which written prayers and laments can be fitted, making it a prayer station as well as a lectern. As one’s eye moves up the wood a gradual change in texture from rough to smooth is noticeable. Owen speaks of the way that God is still working on humanity, transforming us from one degree of glory to another. If the lectern speaks of Christ’s death, the communion table speaks of His resurrection. It has a gaping hole, off-centre, in its base. This acts as a visual reminder of those words in the gospels, “He is not here – He is risen!” The wood around the hole is split and cracked, for the tomb could not hold Jesus for long. It acts as a symbol of vital hope, a hope to which believers return each time they take Communion.

“We had a bumper crop of books because art historians, having previously somewhat ignored the theology of religious imagery and the implications of religious narrative are now suddenly fascinated by it, including two very senior figures in the field – T.J. Clark and Tom Crowe. We gave the prize to a beautiful, huge exhibition catalogue, produced by Yale University Press for the Bard Graduate Center in New York and edited by Ittai Weinryb, to accompany an exhibition, Agents of Faith, on votive objects. I was particularly pleased because it demonstrates how exhibition catalogues can themselves be major contributions to scholarship.”

The criteria for this Award include advancing a public understanding of the relationship between the visual arts and religious experience, beliefs and practices. Encompassing exquisite works of art as well as votives of humble origin and material, with objects dating from 2000 B.C. to the twenty-first century, Agents of Faith seeks to better understand the history and present-day importance of votive objects or ex-votos. By looking at what humans have chosen to offer in their votive transactions, the beautiful illustrations and wide-ranging text expose the global reach of votive practices and the profoundly personal nature behind their creation. This richly illustrated catalogue explores the nature, role, and function of one of the most fundamental aspects of the relationship between people and things—the imbuing of objects with sentiment.

Agents of Faith, like the A+C Art Awards themselves, clearly demonstrates the past and present significance of historic and contemporary artworks to places of worship and their local communities.