A fractious embrace was the subtitle of Jonathan Koestle-Cate’s excellent book from 2016 on Art and the Church, and that remains the case for those seeking to explore the interactions between art and spirituality. My role at St Martin-in-the-Fields involves the development of a movement of churches and other organisations called HeartEdge in which we seek to encourage and support creative combinations of congregation, culture, compassion and commerce. HeartEdge is a forum in which real and realistic conversations about the fractious embrace between art and the Church can occur and in which new experiments in hope can occur.

Much is hopeful and of hope in the embrace between art and the Church. One highlight this year was the opportunity to explore the contemplative element within art through the frame of Bill Viola’s video works. The Parish Church of St Cuthbert in Edinburgh hosted Viola’s ‘Three Women’ for four months, in addition to a HeartEdge event on ‘The Art of Contemplation’. The use of slow motion in this piece by Viola to bring the viewer into stillness and silence has much in common with contemplative practices within religions generally and is a fruitful area for further reflection, debate and exploration, particularly in the light of Viola’s forthcoming 2019’s Royal Academy exhibition.

The work of Corita Kent was also in the spotlight during 2018. The life and work of Sister Corita provides one of the most innovative examples in the twentieth century of creating work out of the dialogue between art and spirituality. The exhibition at Ditchling Museum of Art + Craft of a representative sample of Kent’s screenprints offered a wonderful and rare opportunity in the UK to appreciate the lightness of touch combined with clarity of insight that she displayed in deconstructing the slogans of consumerism from a heart of love.

Both Viola and Kent also experienced the fractious element to the Church’s embrace of art. Viola in reactions to the display of ‘The Messenger’ at Durham Cathedral in 1996, while Kent eventually left Immaculate Heart College in Los Angeles due to the constraints placed on her work by the Archbishop of Los Angeles. For me, the fractious nature of the embrace was demonstrated most clearly in 2018 by the display in St Stephen Walbrook of ‘Crucified Stormtrooper’ by Ryan Callanan, as part of the exhibition of ‘Stations of the Cross’ curated by Art Below.

The possibility that this piece might be removed from the exhibition following complaints from a small number of parishioners generated a significant amount of comment regarding what was, in essence, a non-story, as the issue was resolved by moving the piece to a different location in the church and the exhibition then drew appreciative crowds. While there was more heat than light in much of the online comment, the Church cannot avoid such controversy if it is to genuinely build relationships with those who view themselves as being outside the Church but are nevertheless grappling with their response to the challenge and scandal of Christ’s cross.
The cross has initially been a scandal and a stumbling block within the societies to which the Early Church took the Gospel. The Apostles asked their contemporaries to follow a man who had been given a death reserved for the lowest of the low, who had died among thieves, and who was cursed, as was the case, according to the Law of Moses, for anyone who died on a tree. Christ’s crucifixion is one of the great subjects of Western Art and yet there are very few early crucifixion images, as the Early Christians went out of their way to not depict it.

Contemporary Christians, by contrast, have become so used to speaking about crucifixion that we tend to miss its horror. Instead, we have beautiful crosses on or in our churches, in the lapels of our coats, hung around our necks and embossed on our Bibles. Not only have we tamed the horror of crucifixion in our thinking but we have also tamed the true scandal of the cross; that we are all sinners and that the sinless Christ became sin himself to save us from our sin. In such a context, how do we recapture or represent the true scandal of the cross? While displaying a crucified stormtrooper in a City church generates accusations of blasphemy and of tackiness, it also provides Christians and others with the possibility of experiencing something of the sense of scandal that Christ’s crucifixion created initially.
In the Star Wars films, stormtroopers are the main ground force of the Galactic Empire, under the leadership of Emperor Palpatine and his commanders, most notably Darth Vader. They are on the dark side in that conflict. The imagery of the dark side in the Star Wars films can be seen in this context as equating to the Christian belief that we are all sinners. If we use the imagery opened up for us by ‘Crucified Stormtrooper,’ then we are forced to reflect, much as we dislike the thought, that we are all on the dark side. We are all stormtroopers.

The amazing message of love at the heart of Christianity is that God does something about that situation. God becomes one of us in Christ. He becomes a stormtrooper so that, through his death, he can take the darkness onto himself and enable us to live in the light. That is the original heartbeat of Christianity, which continues to radically change people’s lives on a daily basis around the world when they genuinely acknowledge their own sinfulness. The scandal that is the cross was brought to home afresh by including this artwork in this exhibition; particularly to any who view their own assets as the basis for their own self-esteem. 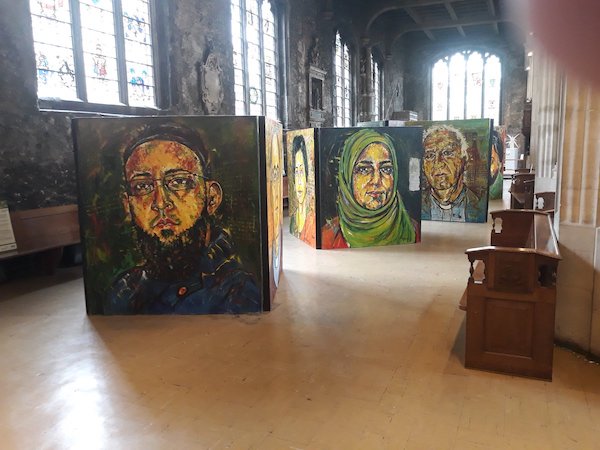 This reflection on the ‘Crucified Stormtrooper’ is unlikely to be what the artist intended when he made the piece, but once Callanan put the stormtrooper on a cross, he made that reflection possible. To show this work in a church enabled that reflection on Christ’s love to be seen and shared in a new way and is one reason why it worthwhile for the Church to show art, especially controversial art, and to explore the questions that it opens up to us. It better by far to engage with these images and discuss the issues they raise, instead of seeking to suppress or censor.

Given the fractious nature of the embrace between the Arts and the Church, there are times, such as the immediate onset of the Stormtrooper controversy, when it seems that the points of contention overwhelm the points of connection. Yet, the reality is that the connections far outweigh the friction, and the conflicts themselves can also be creative and revelatory.

Several of the exhibitions with which I was involved or viewed opened up opportunities for creativity concerning interfaith dialogues. Faith at All Hallows by the Tower was an exhibition which promoted tolerance and understanding in this unstable world by exploring different faiths, religions and belief systems through huge expressive portraits showing the diverse nature of belief. It featured people of faith – and no faith … Christians, Muslims, Hindus, Sikhs, Buddhists, pagans, Rastafarians, atheists and a Zoroastrian. The artist, Russell Haines, noted that, in painting the series, he came to know his subjects ‘as people first and foremost.’
Similarly, ceramic artist David Millidge created a version of The Last Supper in which the disciples are all identical figures but decorated with a thin veneer of symbols and images representing different faiths. The faiths served, approximately in order of affiliated members, including Christianity, Islam, Atheism, Hinduism, Buddhism, Sikhism, Judaism, Taoism, Bahaism, Confucianism, Jainism, and Shintoism. Millidge, whose piece was shown at All Hallows in the Tower as part of the ‘Journey’ exhibition by commission4mission artists, says that his sculpture ‘portrays an optimistic vision of a future where all ideologies sit side by side in harmony.’ He writes that ‘if we are to continue living in a world where wars, conflicts, prejudice and persecution remain on the decline, we must continue to break down the barriers that divide us with acceptance and respect for the different faiths that we live by.’

Nicola Green has been at many meetings of senior religious leaders which seek to do just that. Her ‘Encounters’ exhibition derives from Green’s attendance, over the past decade, at private meetings and unreported small gatherings of religious leaders around the world, involving, among others, former Archbishop of Canterbury Rowan Williams, Pope Francis, former Grand Mufti of Egypt Ali Gomaa, Emeritus Chief Rabbi Lord Jonathan Sacks, Archbishop Emeritus of Cape Town Desmond Tutu, and the Dalai Lama. Often for the first time in history, these religious leaders are leading the way towards a dialogue which respects and honours other religions, without compromising the truth of their own traditions. The historical significance of these meetings has not been recognised because there has been little or no reporting of the meetings. No facial features are shown in the portraits forming ‘The Encounters Series’, acknowledging the ‘under-the-radar’ nature of these dialogues and the significance of role and institution, rather than individuality, within these meetings.

Art, as has always been the case, is at the centre of new developments in human consciousness and understanding. There is real hope to be found in the creative comings together that these exhibitions and works represent, particularly at a time in human history where nationalism and populism seem hell-bent on exacerbating conflict.

As the artist, Michael Leunig has asked: ‘Could it be that spirituality, art and innocence are some of our most important agencies of intelligence, liberation and wisdom? Might it be that a capacity for wonder; the capacity to remain open to all manner of possibilities – the possibilities of change, reconciliation and forgiveness, the peaceful integration of our opposites, the acceptance and love of the natural world, the redeeming capacity for love, beauty, joy and humour in a world grown anxious and pessimistic – might these seemingly improbable qualities be the creative counterbalance to a lopsided world?’ Together with Leunig, I think so.

Words: Revd Jonathan Evens,  Associate Vicar for Partnership Development at St Martin-in-the-Fields, London. Through HeartEdge, a network of churches, he encourages congregations to engage with culture, compassion and commerce. Jonathan is also secretary to commission4mission.