Two recent publications explore the place that religious Art occupied in 20th century Britain. Paul Liss writes in ‘Art, Faith and Modernity’ of the under-researched nature of religious Art in 20th-century British visual culture which has meant that those artists who created art often for a church, are among the unsung heroines and heroes of Modern British Art. ‘Art, Faith and Modernity’ is the catalogue to an exhibition of 172 works by 73 artists which, together with art historian Alan Power’s catalogue essay, presents a strong argument for a reassessment of the critical place that religious Art continued to occupy in 20th century Britain.

‘Church and Patronage in 20th Century Britain: Walter Hussey and the Arts’ by Peter Webster is the first full-length treatment of Hussey’s work as a patron between 1943 and 1978, first for St Matthew’s Northampton, and then at Chichester Cathedral. Hussey was responsible for the most significant sequence of works of Art commissioned for British churches in the twentieth century including works by Henry Moore, Graham Sutherland, John Piper and Marc Chagall. 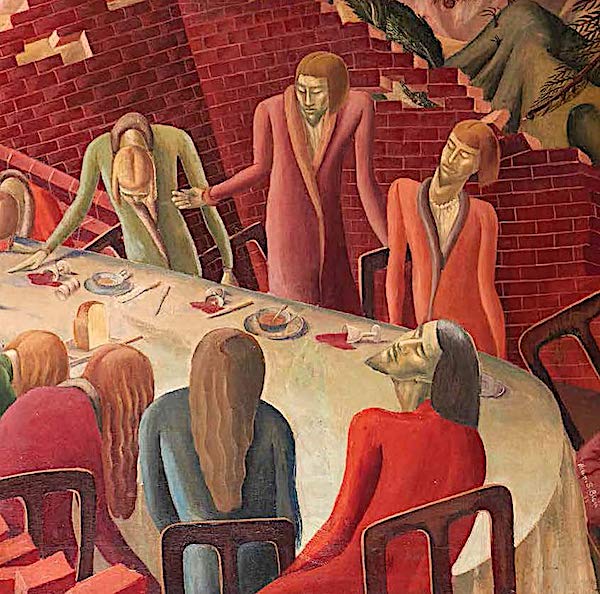 Powers begins his survey with Percy Dearmer, Bernard Walke and George Bell while Webster, in addition to his primary focus on Hussey, also mentions Dearmer and Bell. Dearmer, as Powers notes, ‘did much to spread the acceptance of art in churches between the wars’. He contended that the Church had failed to call to her service the great artists of the previous generation and his ‘The Parson’s Handbook’ may have provided the template used by Hussey as he began his major commissions. In the early 1920s, Walke commissioned artists from the Newlyn School of Artists to create work for St Hilary in Cornwall. While Bell supported the Jewish émigré artist Hans Feibusch, who would become the most significant muralist of his generation in the UK, and also engaged the Bloomsbury Group at St Michael and All Angels, Berwick.

Bell, in his enthronement address as Bishop of Chichester in 1930, expressed the hope of ‘a re-association of the Artist and the Church’. As part of this re-association, he brought Hussey from Northampton to Chichester in 1955. At St Matthew’s Northampton, Webster writes, ‘two commissions by Hussey still face each other across the church: one by Sutherland, and the other, Hussey’s first, from Henry Moore.’ Similarly, visitors to the cathedral can now see commissions from John Piper, Graham Sutherland and also Marc Chagall; with Chichester being one of only two churches in the UK that contain Chagall stained glass. 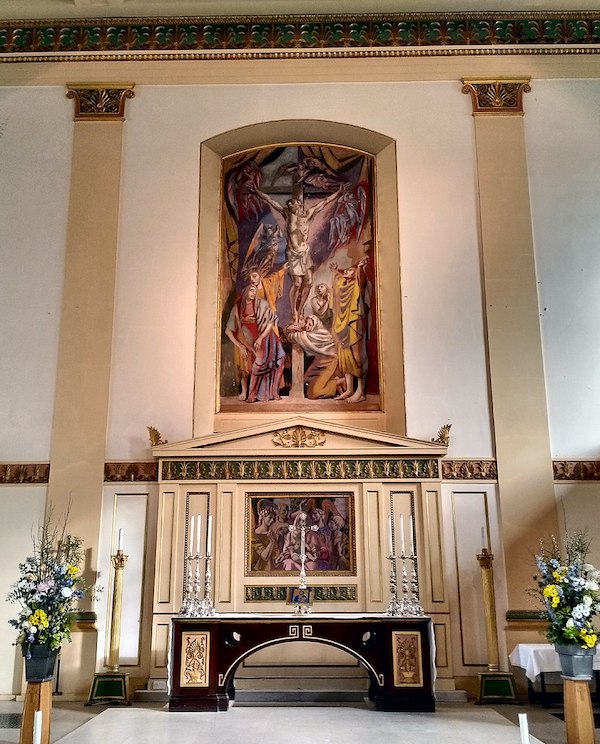 While the two books build on the shared foundation of Dearmer and Bell, they then diverge to explore differing constructions on this foundation. By doing so, if examined together, they broaden our understanding of the interlinkages between Art, faith and modernity in 20th century Britain. ‘Art, Faith and Modernity’ focuses primarily on the Slade School Symbolists and Rome Scholars, Muralists and Others as identified in the Barbican exhibition, ‘The Last Romantics: The Romantic Tradition in British Art, Burne Jones to Stanley Spencer’. Powers notes in ‘British Murals & Decorative Painting 1920-1960’ that these artists permanently lost out to those commissioned by Hussey, as when church art is discussed and debated. It is Hussey’s commissions that are cited rather than those given to Frank Brangwyn, Winifred Knights, Charles Mahoney or Thomas Monnington.

‘British Murals & Decorative Painting 1920-1960’ featured some of the work now included in ‘Art, Faith and Modernity’ as the mural revival of the early twentieth century overlapped the revival in Church art. So, when Paul Liss argues that debate is long overdue about ‘murals that have been lost and murals that might still be recorded and be saved’, some of the work he has in mind include church commissions. Similarly, his suggestion that it is ‘time for a more inclusive view of 20th century British Art in which murals and decorative paintings are fully accounted for’ is also a plea for a re-evaluation of religious Art from the period.

In line with Liss Llewellyn’s focus on the unsung heroines and heroes of Modern British Art, ‘Art, Faith and Modernity’ seeks to re-discover the work of these neglected British artists which was ‘full of religious and mythic quests’. We discover mainstream artists for whom religion is a significant factor in their inspiration. For example, Powers quotes John Napper as saying: ‘[The Bible is] an enrichment. I’m not talking about religion as religiosity, but I am concerned with the eternal truths that exist in the imagination. Only in the imagination, perhaps there can be a synthesis of past, present and future. One of the functions of painting is to give concrete expression to such imaginative thoughts.’ 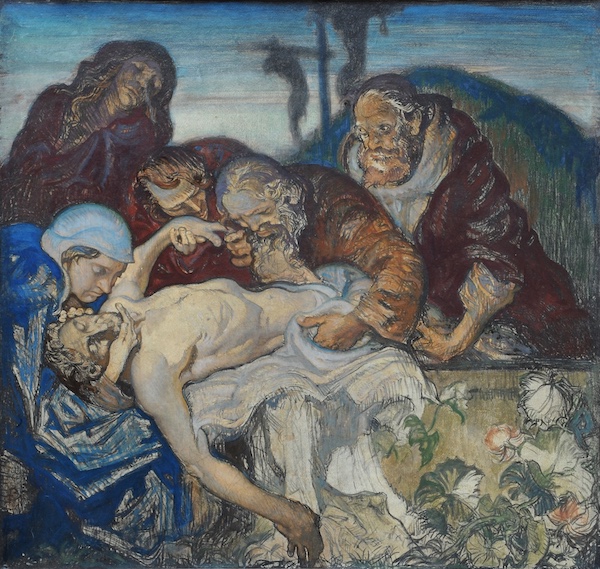 Some such, like Annie Fearon Walke and Charles Mahoney, were commissioned by churches but, in the main, the religious inspiration and themes of these artists reflect personal interest rather than commissioner’s requirements. These are part of that long tradition of artists working mainly in Northern Europe and the United States, mapped by Robert Rosenblum in ‘Modern Painting and the Northern Romantic Tradition: Friedrich to Rothko’, for whom ‘the religious dilemmas posed in the Romantic movement’ acted upon ‘the combination of subject, feeling and structure’ they shared.

By contrast with these artists whose work has suffered the ravages of time leaving them once known but in need of rediscovery, it was, as he expressed it, the great enthusiasm of Hussey’s life and worked to commission for the Church, the very best artists he could. Rather than simply commission those for whom religious themes were a consistent element within their oeuvre, Hussey, in the early stages of his patronage through a network of experts, displayed a particular genius for identifying artists and musicians of real potential who had not at that stage reached the apogee of their talent or fame.

Webster paints a picture of a revival in Christian Art by means ‘of a movement dominated by a determined coalition of religious, artistic and cultural experts’. In Hussey’s case, this coalition focused primarily on Neo-Romantic artists. Hussey’s mode of patronage, which ‘depended on a discerning patron, authoritative critic and notable artist working in tandem, disseminating new art downwards to a grateful if uncomprehending public,’ was, writes Webster, ‘by the 1970s no longer fit for purpose.’ However, while Hussey’s mode of patronage became out-moded, as did his primary focus on artists of the Neo-Romantic Movement, his approach of seeking to commission for the Church, the very best artists he could have been continued by many of the cathedrals and churches that have commissioned work and the agencies which have advised them. This is so despite the difficulty of assessing who the ‘best artists’ may be and the changing nature, over time, of such judgements.

Webster notes that the contemporary Church of England sees its cathedrals ‘now crammed with contemporary Art.’ This part of the story, as it continues beyond the periods covered by Webster and Powers, has been best documented in ‘Contemporary Art in British Churches’ where Paul Bayley argues that the church is moving ‘from engaging with contemporary art in an opportunist manner to thinking is central to their mission and an achievable and sustainable activity.’ The result is that there is ‘an increased acceptance that contemporary artists have a unique contribution to make in reinvigorating and re-enchanting our churches and cathedrals.’

Bayley primarily follows the line of development from Hussey, one that Powers and Liss argue overlooks the creativity of the symbolists and muralists whose work they promote and value. As a result, a supplementary exhibition or publication could also be considered and may be necessary which would survey the work of such as Norman Adams, Peter Eugene Ball, Mark Cazalet, Thomas Denny, Jane Dowling, Albert Herbert, Dinah Roe Kendall, Nicholas Mynheer, Margaret Neve, John Reilly, Betty Swanwick, Greg Tricker, Roger Wagner, Richard Webb and Evelyn Williams, among others. These have been among the more contemporary equivalents to the symbolists and muralists that Powers and Liss document and have been similarly under-recognised, in part because of the religious focus that is often within their work and the frequency, for some at least, of their church commissions.

The interlinkages between Art, faith and modernity in 20th century Britain are more varied, sustained and significant than was previously recognised and these two publications add substantially to our understanding, while also revealing the scope that still exists for additional research, exhibitions and publications.