Art Below are featuring the work of 28 international artists across billboard space at Regent’s Park tube station for 4 weeks starting 25th September.

Art Below have also commissioned artist Nina Mae Fowler to produce a portrait of the legendary Bernie Katz ‘Prince of Soho’ who passed away on 31st August 2017.

The finished portrait has been printed as a poster and will go on display at Regent’s Park tube station for 4 weeks from 25th September in tribute to Bernie Katz who was front of house manager at London’s Groucho club and retired in March 2017 after 25 years of being there. 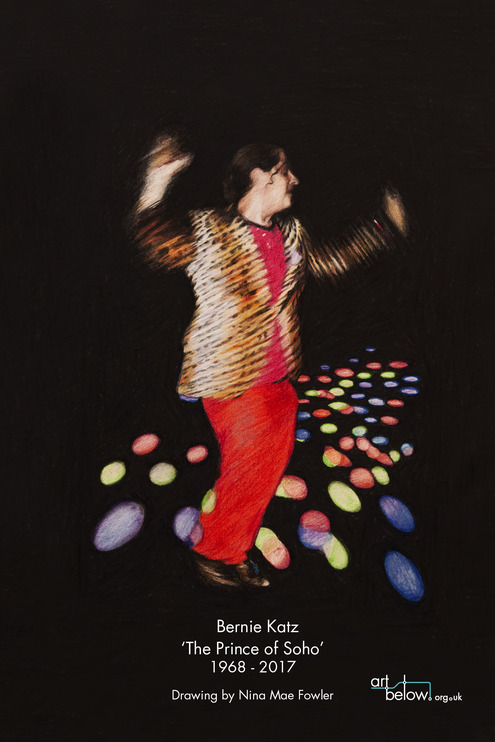 The original drawing will be unveiled at the Art Below private view at Le Dame Gallery, Regent’s Park on 21st September and will be hung alongside London based artists including Molly Parkin, James Mylne, Nettie Wakefiled and Orlanda Broom. On Friday 22nd September the portrait will go to Bernie’s funeral followed by his farewell wake at the Groucho Club.

Director of Art Below Ben Moore  says ‘I wanted to show homage for my old pal Bernie, and thanks to Nina Fowler I think we have produced a beautiful image of the dear chap.’

Nina Fowler whose work hangs in the Groucho club says ‘This drawing is a rare use of colour for me but black and white just would not do when it came to portraying Bernie. He was an avid supporter of artists and combined this with endlessly raising money for charity. This drawing shows him in a moment of isolated ecstasy on the dance floor at my best friends wedding. I loved him very much.’

All proceeds from the sale of the drawing and limited edition prints will be donated to the crowdfunder, raising money in support of Bernie’s family.

Limited edition prints of the drawing are also available to buy.  So far £2,500 worth of print sales have been raised.

Katz was the author of Soho Society in 2008. This was a collection of semi-fictionalised romans à clef in which the chapters rejoiced in names such as “Seduction of The Straight Man” and “Interview with a Rent Boy”. Such were the circles in which Katz moved, he was able to call on Tracey Emin, Damien Hirst and Peter Blake to illustrate his tales.

Having been at the Groucho club for over 25 years, looking after everyone from Jaime Winstone and Sienna Miller to Noel Gallagher and Damien Hirst.  He was knwon to be a great keeper of celebrity secrets,  and earned a fearsome reputation as a fixer.

In 2015, GQ magazine featured him as one of the 100 Most Connected Men in Britain.

NINA MAE FOWLER:  Nina Mae Fowler (born 1981) is a British artist living and working in Norfolk. She is known for her large scale pencil and graphite drawings, which are often accompanied by sculptures.

She has been nominated for the BP Portrait Award for her painting of the ballet dancer Carlos Acosta. In 2012 Oxford Universtiy commissioned her to depict Professor Richard Dawkins. The portrait was used by Dawkins in his book An Appetite for Wonder: The Making of a Scientist.

Speaking about her work Fowler said “Deep psychological conflict, the turbulent mix of early black and white Hollywood glamour and its attendant dark side are the focus of my work. Using imagery appropriated from films and the day-to-day lives of celebrated icons such as Elvis; Marlene Dietrich and Jean Harlow, as well as unknown figures drowned in the wake of Hollywood’s dream machine”.

ART BELOW: Art Below is a London based public art enterprise, founded in 2006 by brothers Ben and Simon Moore.

With a wide range of international artists and its various campaigns in cities worldwide, the organization has an important position within the movement of contemporary art in public space.

Art Below uses billboard space in underground stations to display artworks in London and overseas. The group has nurtured an international community of artistic talent and has displayed the works of over 3,000 artists in London, Tokyo, Berlin and Los Angeles.

GROUCHO CLUB: The Groucho Club is a private members club formed in 1985 located on Dean Street in London’s Soho. Its members are mostly drawn from the publishing, media, entertainment and arts industries.

Art Below are also hosting a group show of all the artists original work at Le Dame Gallery set within a 4-star luxury hotel, just 2 minutes walk from Regent’s Park tube station.

The exhibition includes a photographic portrait of the artist Molly Parkin, a portrayal of Donald Trump by James Mylne and a drawing of Bernie Katz who passed away on 31/08/17 by artist Nina Mae Fowler.  All proceeds from the sale of the drawing will go to Bernie’s family.