ArtBAB Bahrain, in its third edition, is an international event to be reckoned with. It is certainly not the most significant or commercial fair in the region, with Art Dubai just following on next week. However, ArtBAB has its own individual brand and strong identity. The fair is the brainchild of Kaneka Subberwal the enthusiastic founder and programme Director of the event. Subberwal is passionate about art and education and this year’s fair promotes collaboration through knowledge and education. You just have to stroll the aisles of the fair to discover the many educational institutions involved with the fair this year. Many of the younger artists are exhibiting for the first time, and the energy is evident in the work they have chosen to display at the fair. This covers a multitude of mediums and practices ranging from Painting, Sculpture, Video, Installation Art to Street Art. 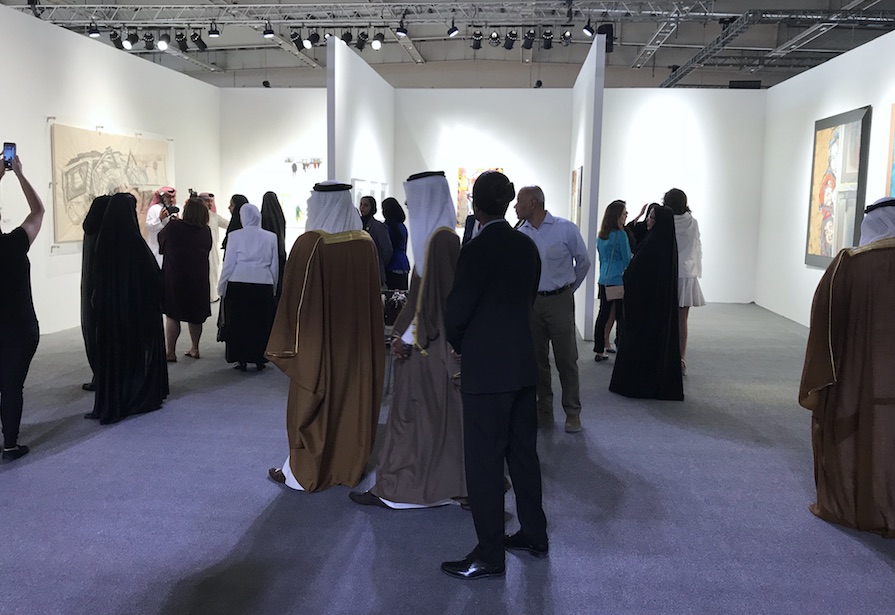 Her Royal Highness Princess Sabeeka Bint Ibrahim Al-Khalifa is the fair’s patron and without her support and encouragement, the event may have stalled at the starting gate. I observed the Royal entourage as they walked around the fair this year and they stopped and talked to most of the participating artists. Her Royal Highness is a connoisseur of the arts and by all accounts has a special love of painting. The Princess is dedicated to promoting women’s rights and welfare. She presides over the Supreme Council for Women, which is the official reference for women’s activities and actions in the Kingdom of Bahrain. She is concerned with formulating the national strategy and general policies related to enhancing the role of women in many areas. Her support of female Bahraini artists is especially commendable. It is no wonder that many of the artworks at the fair have been created by women artists.

The 2018 edition of Art Bahrain ‘Across Borders’ consisted of seventeen galleries with both local and international work displayed. Sixteen independent artists from eleven countries were presented. The fair also highlighted several local Bahraini artists giving them the opportunity to showcase their unique talents through a sponsored Pavilion which exhibited over one hundred works. 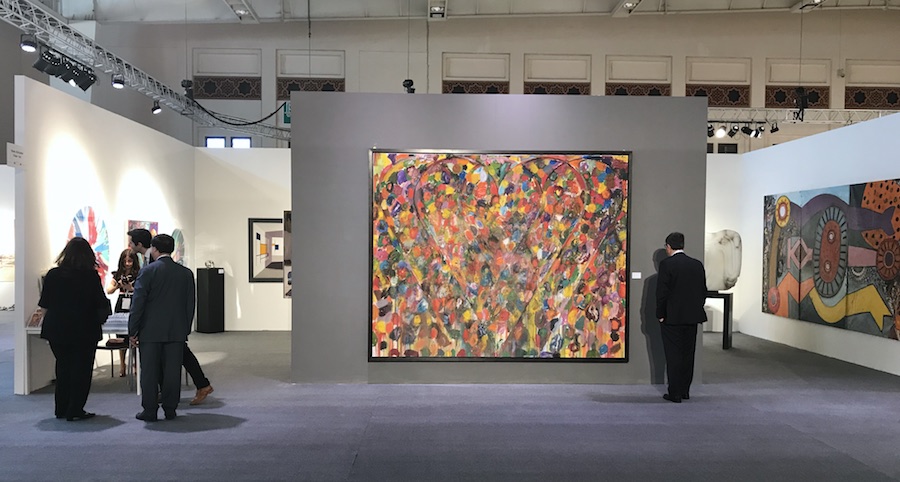 There were also several international galleries showing at this year’s event, the most notable Alon Zakaim London who showcased a variety of works by Damien Hirst, Jim Dine, Patrick Hughes and Alan Davie. It was noted that one of the Hirst Spin Artworks sold for a six-figure (Sterling) sum.

Other galleries worth mentioning had solo artist shows including Balqees Fakhro with a beautiful selection of Abstractions using a typical Bahrain colour palette. This is an artist that would be embraced by the west if discovered. The Greek painter Chryssa Verghi painted in water reflections in a Photo-Realist manner, and the solo show by David Breuer-Weil with paintings and sculpture was notable. 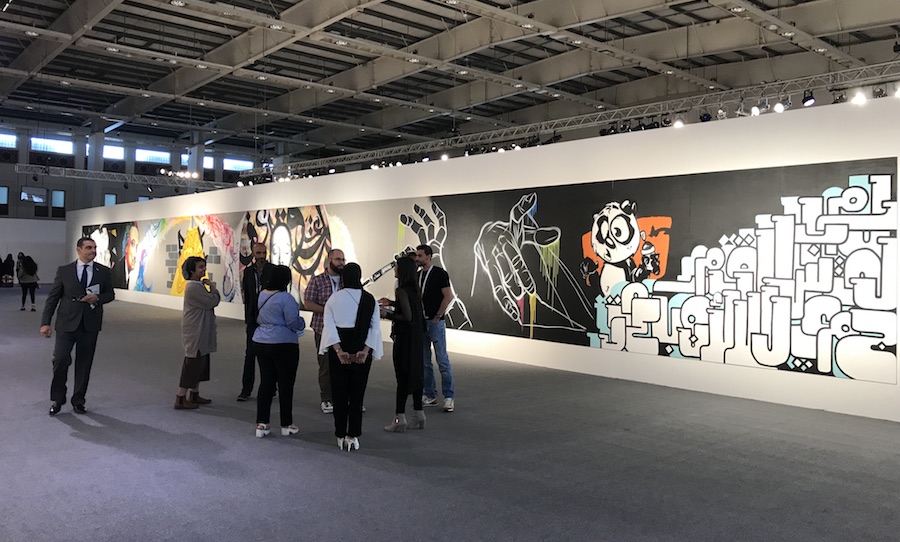 The Dirty Hands Crew: Two of the aisles were devoted to local Street Artists The Dirty Hands Crew. The works are a collaboration between five international artists Kojak from Tunisia, Arnaud from France and Mustafa from Bahrain. Together with five young local artists the youngest being 17 years old Mohammed Nedal. Together they have created an impressive centrepiece for the fair. Of note Hawra Ahmad ‘Power’ and my favourite an Expressionist head by Faris. 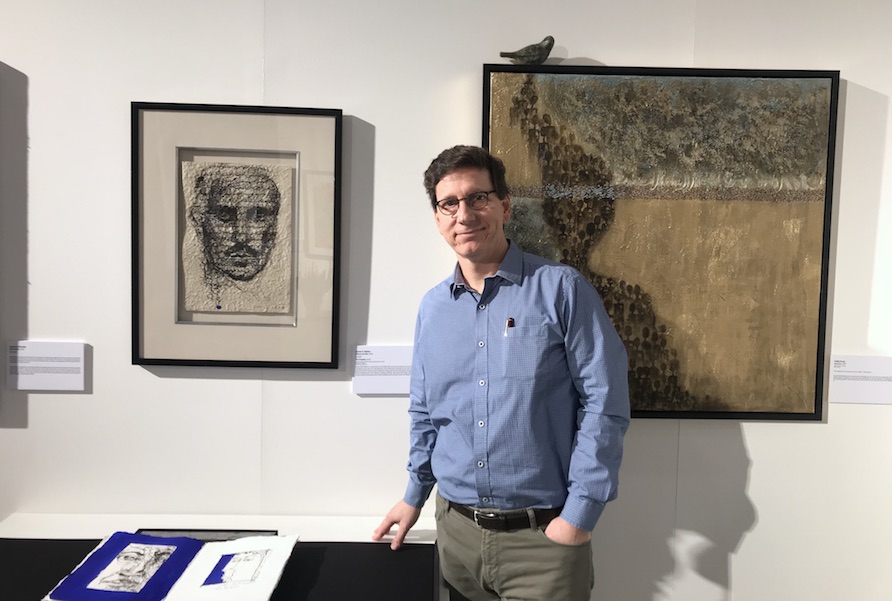 Caravan is an international initiative which promotes peace through art. The artist Jamal A Rahim produced a superb hand drawn book with lines from Gibran’s book of the Prophet. Caravan was founded by Rev Paul-Gordon Chandler and the stand curated by Londoner Janet Rady.

BAB Pavilion Artists of note Ahmed Al Asad for his Pop Art portraits like a Middle East Peter Blake, Aysha Almoayyed exhibited very accomplished large scale ink drawings of car crashes and everyday objects, and Nada Alardi was well received by the Princess when she made her rounds.

Zayad University Showed work by Shaikha Al Ketbi, Asma Belhamar and Rawdha Al Ketbi and Ayesha Hadhir it wouldn’t be out of place at any UAL masters exhibition. The Royal University for Women exhibited excellent photographs by Zorba Laith and a well-executed video by Ebtihal Al-Ansari. 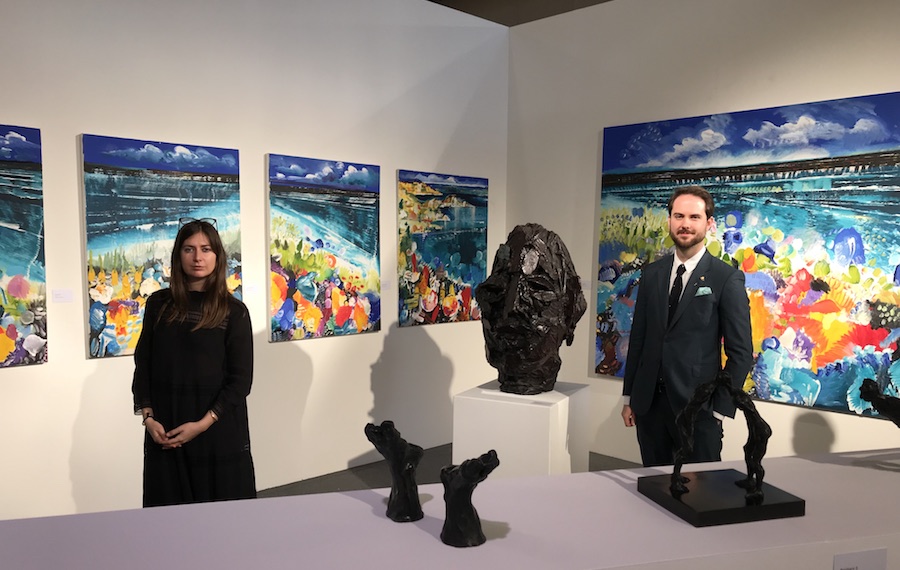 Building Bridges by Jaideep and Seema, India Khalil Gibran: A Guide For Our Time, Lebanon.

ArtBab was an all around success this year with visitors from Saudi Arabia, India, and Europe. Sales were buoyant with a steady stream of visitors through the doors. The art market is quite different in Bahrain than Europe, Asia and the US, with the prices of work still in the ‘affordable’ spectrum, as the market is quite local.

Also on my trip I also visited the heritage district which has been beautifully renovated. The 19th and early 20th century architecture is a hidden gem in an otherwise booming modern city.

ArtBAB will return next March for edition number four