The fourth edition of ArtBAB has closed with a unanimous thumbs-up from both the Artists and exhibiting Galleries. The fair organised by Kaneka Subberwal was the highlight of the Bahraini art calendar. Attendance at ArtBAB, held in the Bahrain International Exhibition and Convention Centre was recorded at between 8-9,000, the highest volume yet, with sales up by 15% from last year.

The royal family was present to show their support for the fair which is under the patronage of Her Royal Highness Princess Sabeeka Bint Ibrahim Al Khalifa. I spoke to His Royal Highness Sheikh Mohammed bin Essa Al Khalifa who explained; “Bahrain is steeped in history with a rich culture of artists and artisans dating back many centuries”.

ArtBAB 2019 pushed technology at an art fair to the next level. The 2019 edition offered visitors a multi-dimensional experience through its Virtual Reality Corner, the first of its kind in the region. First up was the highly sophisticated Kremer Collection powered by Vive Arts MSI the VR which takes you on a journey through its rather splendid collection of Old Master Paintings in a virtual museum setting. You receive personal guidance by the Kremers themselves who appears as a hologram talking you through the exquisite works of art. 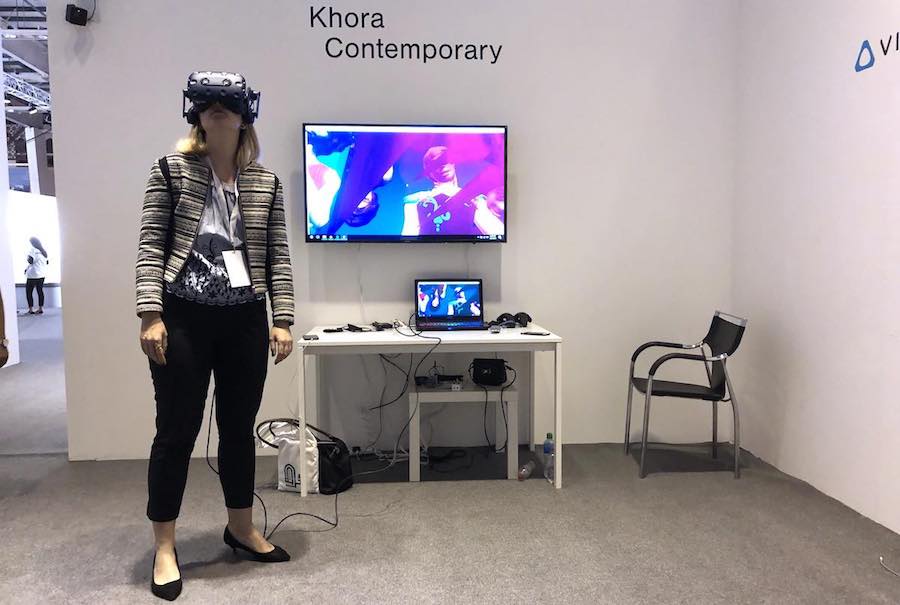 Next up I really enjoyed the cutting edge VR created by Paul McCarthy which was debuted by Khora Contemporary. This was of the high standard of quality we look for at a fair of international standing. The experience was disturbing as one comes to expect from Mr. McCarthy’s work. 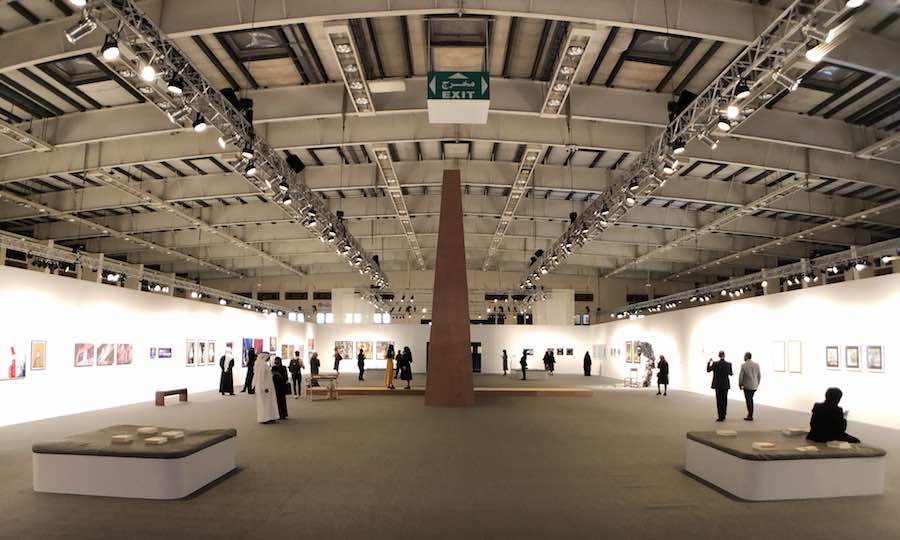 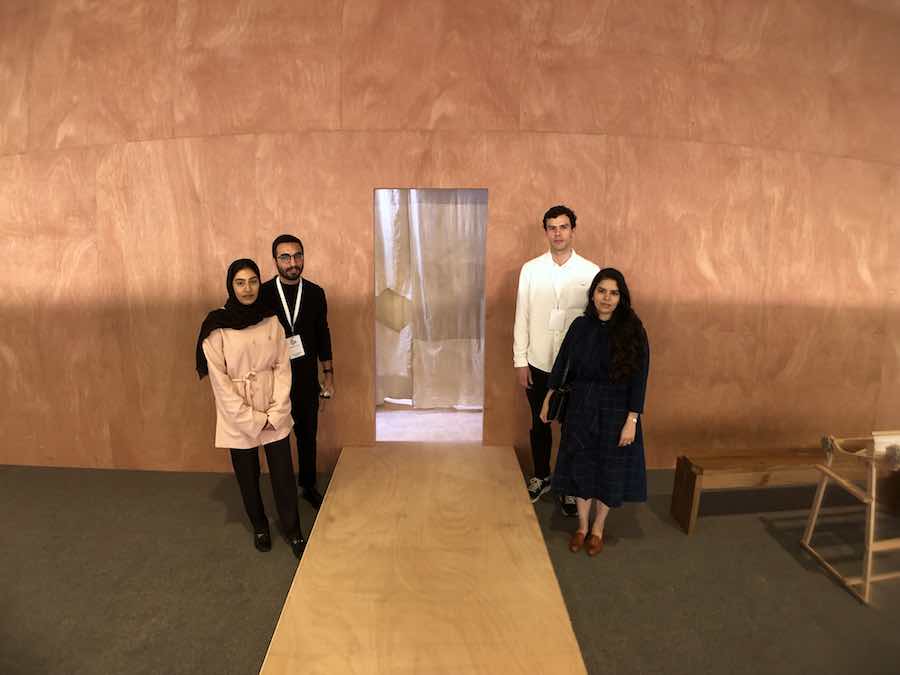 Bahraini Danish a collective of two Bahrainis, and one Danish National, along with Hala Kaiksow

The centrepiece of BAB Pavilion was a collaborative piece by Bahraini Danish a collective of two Bahrainis, and one Danish National, along with Hala Kaiksow an internationally recognised artist working with hand-woven textiles. Bahraini Danish have all worked together on different design pieces and installations. They are trained as architects, so they have a different view of space. The idea was to create a protective space, which has been a theme for a long time in Kaiksow’s work. She is a woman creating her own protective space. It is an interactive space, where the viewer is forced to participate in the piece interacting with the textiles. They have their own feel and life through the fabrics. It is a play with proportion which puts the viewer into a different mindset. 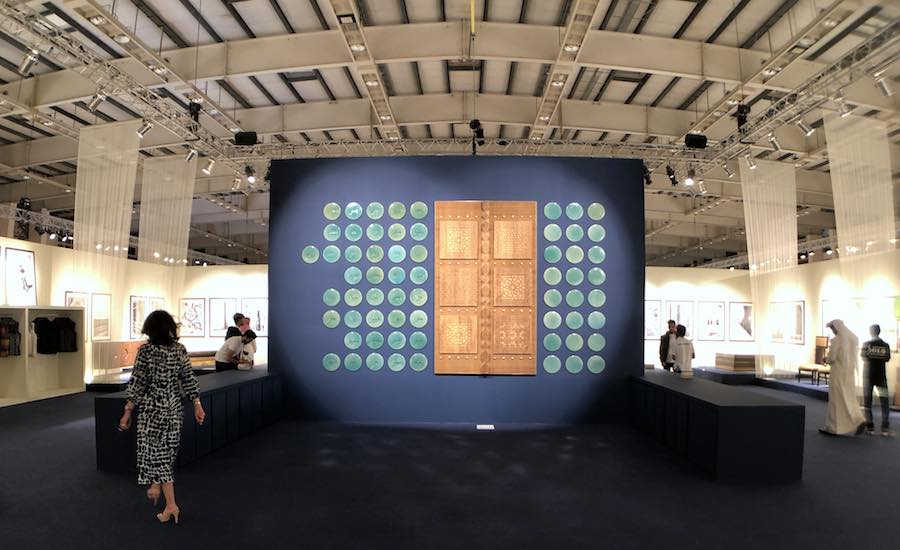 This ‘Artisans Across Borders’

ArtBAB 2019 also celebrated Bahrain’s rich crafts heritage through a contemporary design exhibit where visitors could view large modern installations of Bahraini crafts and explore contemporary Bahraini arts and crafts present at the fair. Bahrain as a country is open to modern thought, without losing the essence of its timeless traditions. This ‘Artisans Across Borders’ initiative will open new creative channels, making the arts and crafts relevant in the new millennium. The project was headlined by acclaimed Indian fashion designer JJ Valaya, who worked closely with the Bahraini craftspeople. 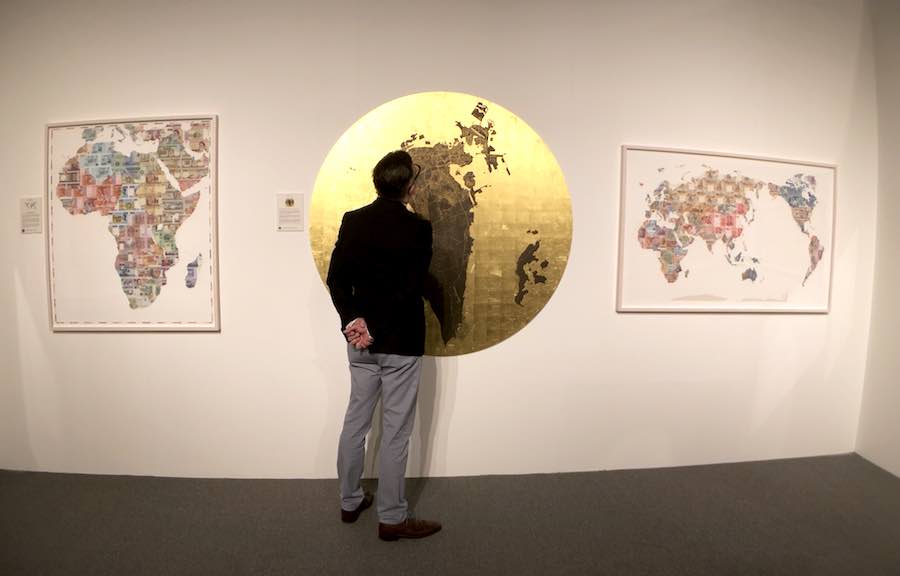 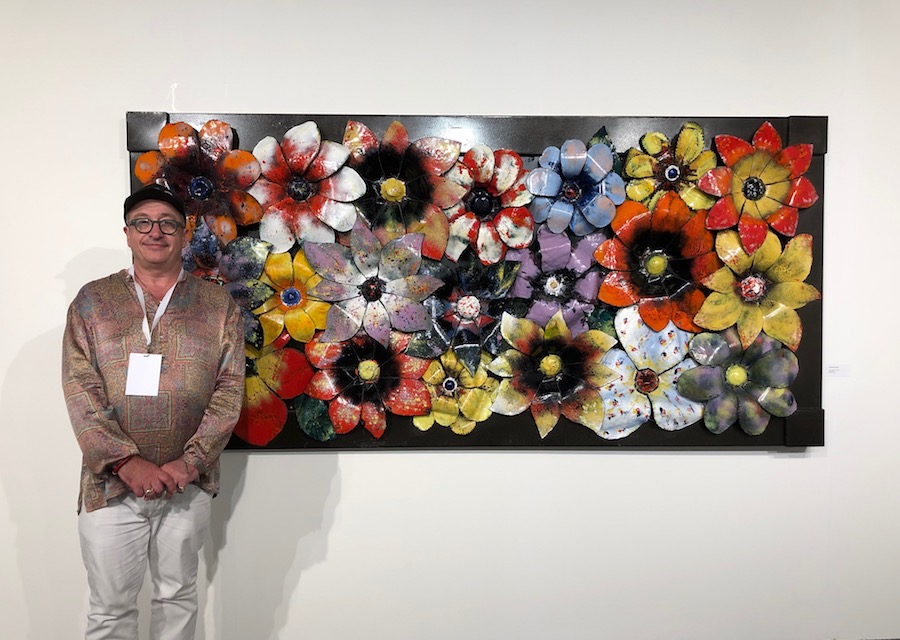 Art Agency Ltd brought a solo show of the Georgian/Russian artist Zurab Tsereteli hot off of his retrospective exhibition at the Saatchi Gallery in London. 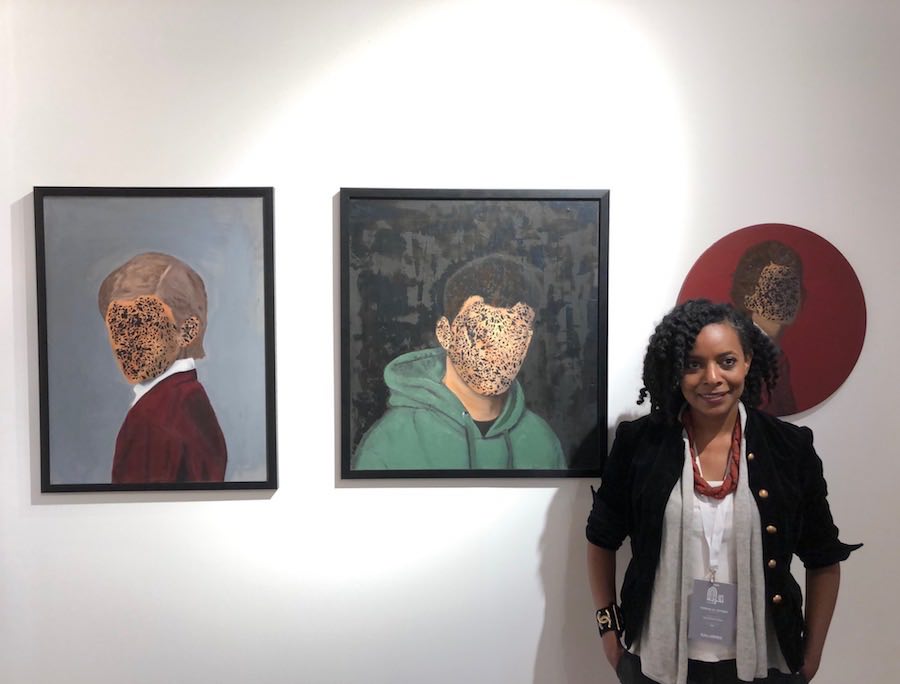 Gallery Bruno Massa Paris/NY had a selection of portrait works by the Jordanian artist Wedad Alnasser. The subjects both male and female are shrouded in anonymous veils. These well-constructed works are reminiscent of Rene Magritte and reference Surrealism. 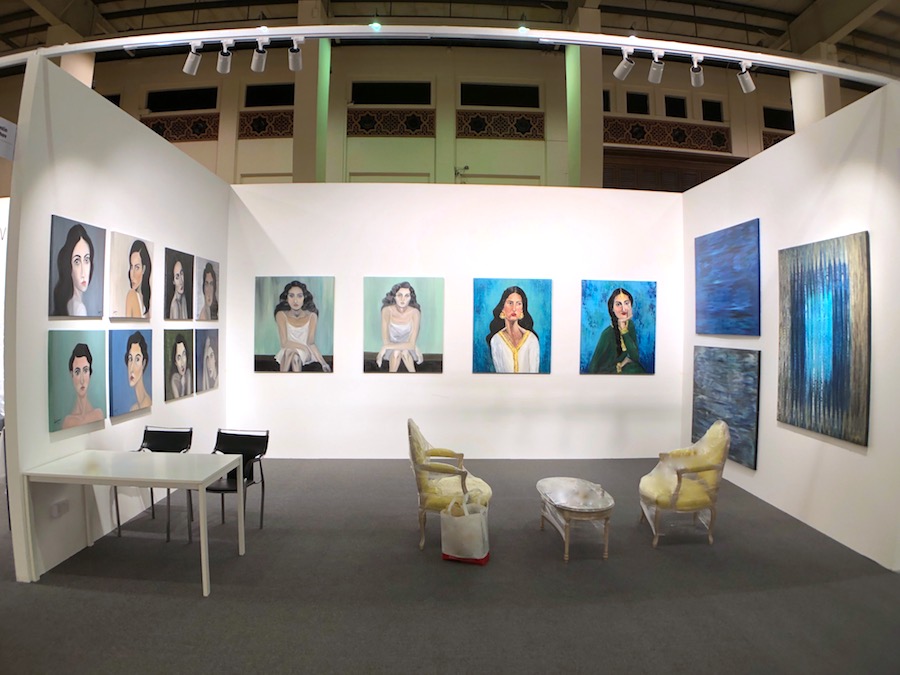 Lulwa Al Khalifa presented a number of her highly accomplished portraits which were joined by a number of new Abstract paintings. 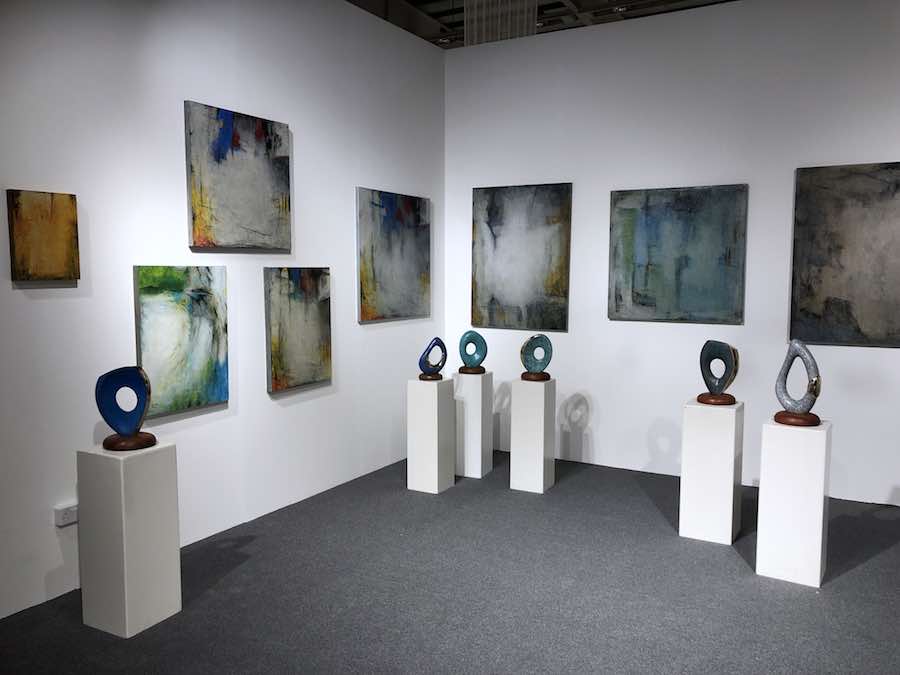 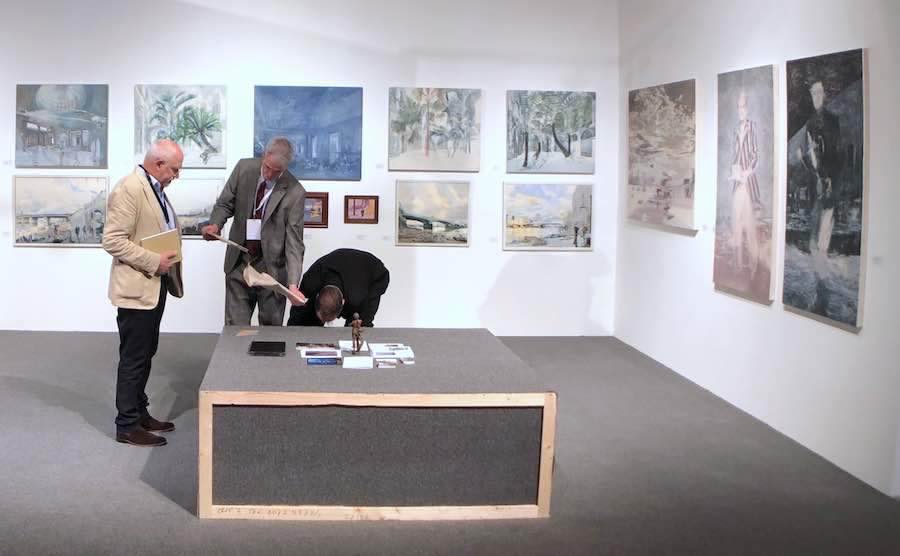 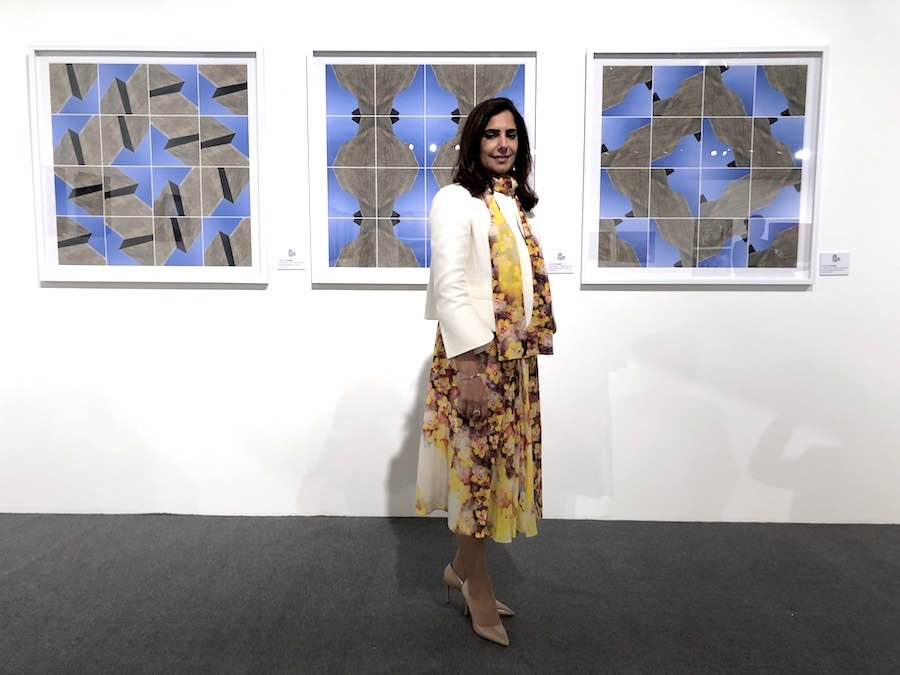 Marwa Al Khalifa:  These bold geometric works are based on traditional symbols and decorative ornamentation. I was pleased to see her work on display at the fabulous new boutique hotel Merchant House Manama 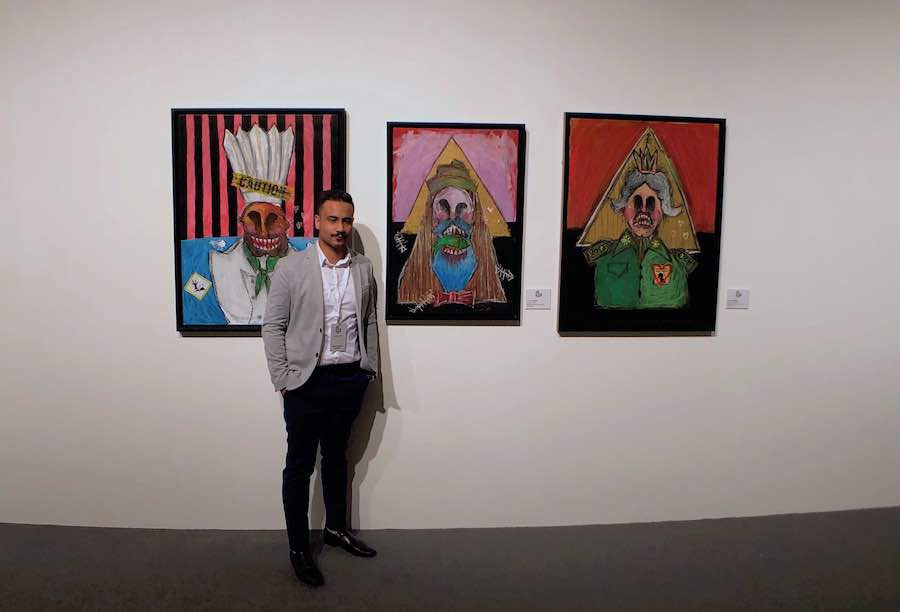 Ahmed Alasad: Is a strong painter his exhibited portraits are ‘Pop’ inspired and remind me of the British artist Peter Blake but with their own Middle Eastern flavour. 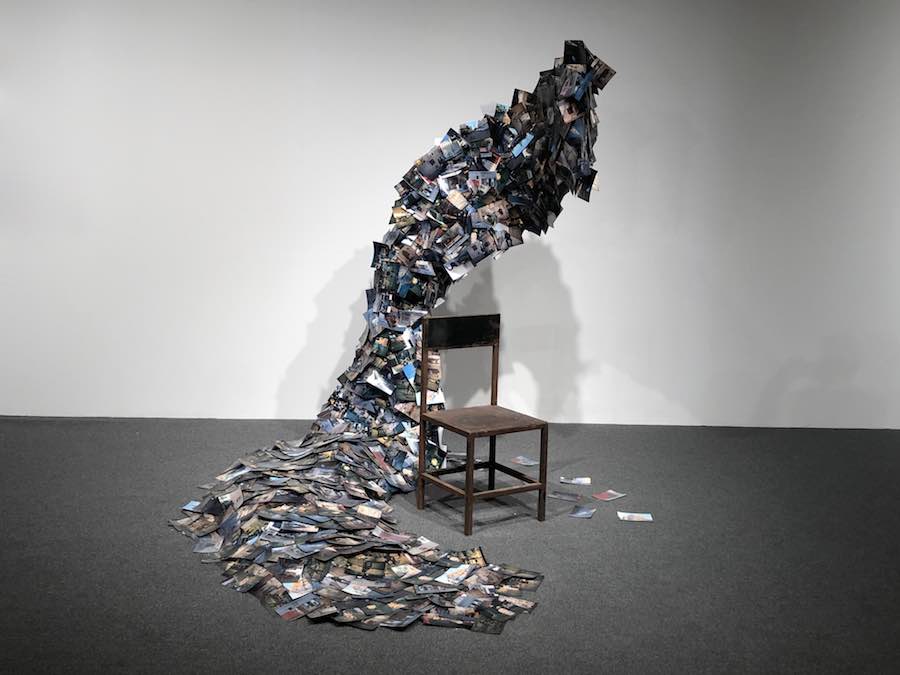 Jaafar Alhaddad: Has created an installation using a chair with photographic prints entitled Storm of Memories He believes that art is an important part of communication and a catalyst for intellectual thought. 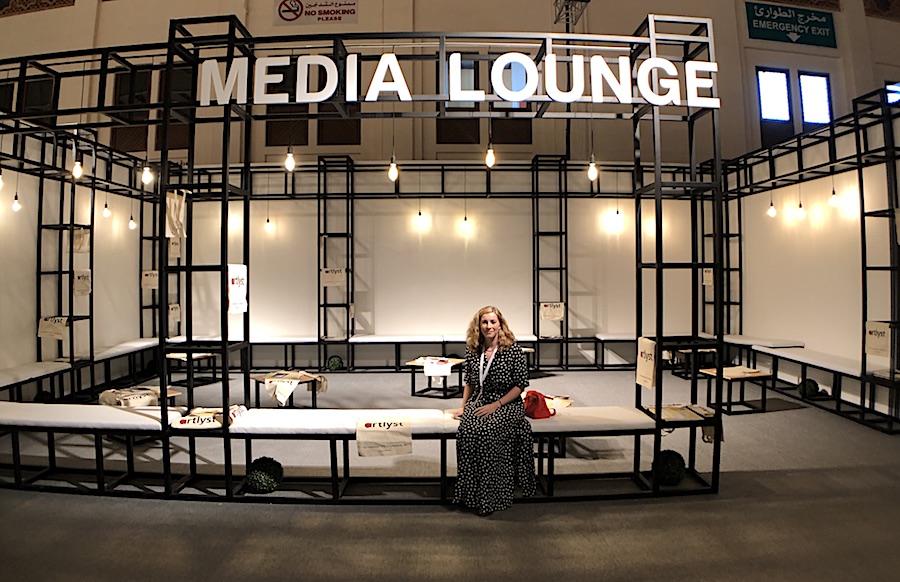 ArtBAB is the flagship project of Art Select, the international Bahrain-based art advisory, consultancy and curator of art events. ArtBAB is designed as a conversation between Bahrain’s artists and the rest of the art world. It has forged a unique identity for itself, as a marker of the Kingdom’s contemporary history as seen through the prism of art.