DARREN COFFIELD: Hedley Roberts what does your new exhibition at New Art Projects consist of?

HEDLEY ROBERTS: About 20 paintings made over the last two years. They were all made during a specific period of change in my life. For a long time, I have been interested in the gap between people. How hard it is for human beings to understand and one another’s experiences when we are trapped inside a body of flesh. I am interested in how we try and bridge that gap.

DARREN COFFIELD: Is that why the exhibition is made up of human faces? Are you concerned with reading and communication through the human face?

HEDLEY ROBERTS: The face is where we start to build a sense of the person. Normally I start off striking up a relationship with someone and then I ask them for an image of themselves, which then becomes the starting point of the painting. I paint it over and over again, painting it out in a process of trying to understand it. That then becomes the painting created as I try to relate to the person.

DARREN COFFIELD: Should the faces be read as masks?

HEDLEY ROBERTS:  Yes and no. We are all creating identities for ourselves in the way we represent ourselves. The paintings have a powerful ‘selfie’ look to them in terms of the eyes and composition. They are drawn from people’s photographs of themselves. When people take those photos they are positioning themselves as for how they would like to be seen on social media as a persona. The paintings are trying to make a bridge in a relationship to them. They became about the experience of the ‘time’ looking at them.

DARREN COFFIELD:  Where does the bright high chromatic palette in your work come from? Do the colours imbue any meaning to the subject? 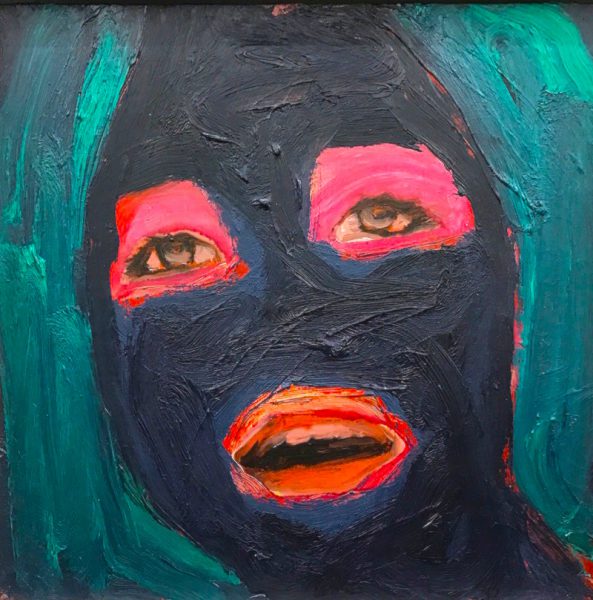 HEDLEY ROBERTS:  Colour is a way of creating a discord, I’ll start with an idea of a balanced colour palette that might be a triangulation across the spectrum of the colour wheel, and then I’ll imbalance the emphasis of the palette to develop tensions across the painting. The paintings often start off quite low-key and build up in intensity whilst re-working the image. The colours come from a variety of sources and have some relationship to the subject; they might be colours on the market stalls in Ridley Road, or a piece of sing-writing, an outfit combination that someone is wearing, an album cover, a logo. As the painting develops sometimes the colour scheme changes entirely. The paint film builds up through this process, and contribute where they are revealed in a glaze, or at the edges of an opaque passage of paint.

DARREN COFFIELD:  What about the format of your paintings? They don’t reference the golden rectangle.  They are square, which is an unusual format. It makes me think of passport photographs and polaroids.

HEDLEY ROBERTS:  People’s portraits on social media are nearly all square. It’s a strange format to work with and can make the subject difficult to compose. You end up with these strange compositional crosses going on in the picture which can mean that by subtle shifts you can end up with these very tense confrontational constructions where I find I can do strange things with the eyes!

DARREN COFFIELD:  Is it of any importance that the person who supplies you with their image, let’s call them the sitter for the purpose of this conversation, is it important for the sitter to be able to recognise themselves in the final artwork?

HEDLEY ROBERTS:  That’s an interesting point because what happens is the painting changes a lot over a long period. Then I send a picture of the painting to the person and we have a dialogue about how they see themselves. They are not really portraits because they loose their index. 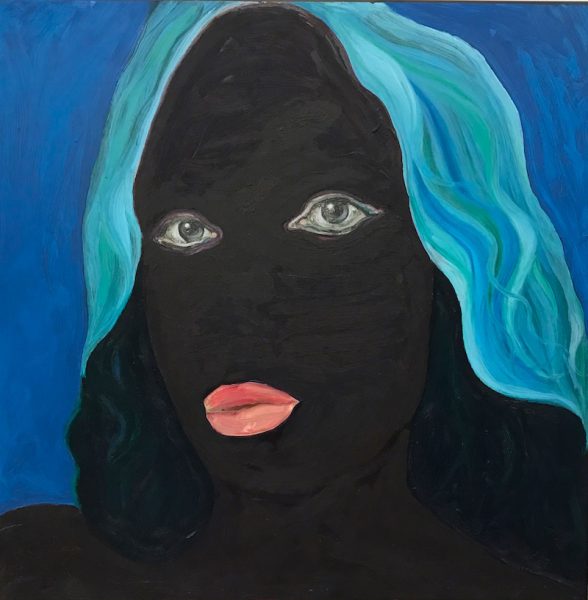 DARREN COFFIELD:  I think people might read the heads as masks because they have no noses on them.

HEDLEY ROBERTS:  I was trying to break away from referencing the person in an obvious way. By painting out more sections it allows me to talk about the gap between myself and the sitter with the paint – they end up looking removed.

DARREN COFFIELD:  Mark making is intrinsic to your painting process. I noticed that you don’t paint on canvas and use aluminium sheets. Does this allow you a greater pliancy with the paint?

HEDLEY ROBERTS:  I have painted on canvas but mostly I paint on metal panels. It was a process that evolved from working on gesso panels years ago. However, gesso panels get very heavy when working on a large scale. So I began using aluminium for a similar surface.

DARREN COFFIELD:  Your mark making seems to echo the form in your work which puts me in mind of Edvard Munch.

HEDLEY ROBERTS:  The mark making is part of the process. Layering up and moving material around. I have easels which can tip up to become horizontal so the paintings are worked on vertically, horizontally and every angle in between. The mark making builds up over time as I push the paint material around, using thick and thin glazes and solutions to build the mark. In this way, it does echo some of the marks that Munch used, and that’s deliberate. In other ways the marks reference other painters; Matisse, Goya, Velázquez, Rembrandt, Heron, Hume, Auerbach, Bacon, they’re all in there – painting is always a dialogue with its own history.

DARREN COFFIELD:  Whilst working on the paintings do you see them as individual paintings or part of a series? 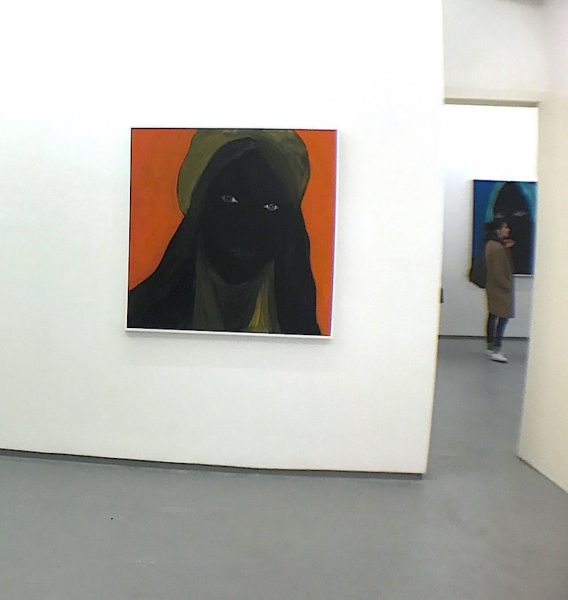 HEDLEY ROBERTS:  They’re always an individual work, made in an individual ‘mood’. I am not using the same solutions in every painting. However, I do work on multiple works at the same time, and over a long time, transferring techniques from one to another and back again. As a result, there’s a lot of dialogue going on between the artworks.

DARREN COFFIELD:  Hedley Roberts paintings can be seen conversing with one another at New Art Projects, Sheep Lane, London E8 4QS until 29 April.

Darren Coffield was born in London in 1969. He studied at Goldsmiths College, Camberwell School of Art and the Slade School of Art in London. He has exhibited widely alongside leading British artists including Damien Hirst, Howard Hodgkin, Patrick Caulfield and Gilbert and George at venues ranging from the Courtauld Institute, Somerset House to Voloshin Museum, Crimea.

Hedley Roberts lives and works in Margate. He is a graduate of Central Saint Martins BA Fine Art and the Royal College of Art MA Fine Art Printmaking, and also has a Doctorate in Fine Art from the University of East London. He has been a Royal College of Art Fine Art Fellow and a Stanley Picker Fellow at Kingston University. He has worked for 20 years in Higher Education and until recently was head of Art & Design at the University of East London. He now leads art and design research. He runs a number of artists Residency projects, including ‘Directional Forces’ which has taken place in Germany, Serbia, Italy and Greece and involved over 60 artists since 2011. Solo exhibition: ‘Hedley Roberts’, Wolo Gallery, Kuala Lumpur (2014), and ‘The Lovers’, Herrick Gallery, London (2014). Selected group exhibitions: Pravac Sila, Ozone Belgrade, Serbia (2014); Factual Nonsense, Red Gallery, London (2014) and Sunday in the Park With Ed, Display Gallery, London (2014). His work has been presented nationally and internationally including at the International Symposium of Electronic Arts Japan, Superdeluxe Gallery Tokyo Japan, Artoll Germany, Annexe Gallery Malaysia, Nanyang Academy of Fine Art Singapore, Susak Biennial Croatia, Ozone Belgrade, and APT. His work is in private collections in the UK, Europe and Asia.