The Pan-European art biennale Manifesta12, in Palermo is presenting the internationally acclaimed artist Avner Sher as an official collateral event.

The artist has taken over the central historical location at the Monumental Complex of Steri, Sala delle Verifiche, and the adjacent courtyard. Sher is both an artist and architect. In his work he turns to the urgent topics of migration and refugees with this extensive and timely solo exhibition comprising of wall-based works and large scale sculptural outdoor installations.

Artlyst caught up with the artist on the opening days of the event.

How would you describe your practice?

For about 20 years I have been investigating the topic of destruction and building and the relations between them, as well as the unexpected consequences of rebuilding from chaos. I confront past and present, history, archaeology, and memories. I burn, scratch, cone, destroy and gnaw at cork. Choosing cork as my main material is due to the special characteristics of the cork tree: it does not burn in a forest fire (it turns black but survives and continues to grow), stands every nine years in the trauma of peeling the outer layers, exposing the core of the trunk to the pests, but the tree survives and continues to grow. This is a metaphor for the traumas that civilisations and religions pass through again and again, but continue to survive and develop. For Palermo I worked in the same way, corrupting and rebuilding, cutting, ripping the cork surfaces, while manipulating, re-constructing maps of Palermo and Jerusalem on it, intertwining current and ancient maps.

Whom do you list as your main influences and reference points?

I am influenced by archaeological findings, by the secrets that are revealed in antiquities, by civilisations’ ruined structures, as well as by us, modern civilisation, coping with past and present. Also primitive art and art movements such as Cobra and Art Brut. For the past few years, I have been working with ancient maps that I interspersed with current maps, maps that do not necessarily describe reality but the will of the rulers throughout history. I allow myself to do what rulers have done for centuries: manipulating, distorting maps to suit their political and territorial perceptions.

As an Architect, is your artwork impacted by your other practice?

From my practice as an architect, I learn what not to do. As an architect I plan, build, think, try to be precise and deliberate my creation carefully … and certainly not destroying. As an artist, I create from the products of vandalism and chaos that I create myself – but these eventually lead me to rebuild creative and surprising works of art.

Your latest collateral show at Manifesta in Palermo is a comprehensive overview of your practice and explores mapping and migration, but also the atrocities committed during the Spanish Inquisition in Palermo. Could you describe your experience creating the work?

In my opinion, there is nothing new in Palermo, nor in Jerusalem. History repeats itself, cities that have been conquered, destroyed, rebuilt over and over again in history, cities were dominated by many civilisations, religions, armies and especially blind messianic faith. All this is expressed in the countless manipulations and hidden messages that have been planted on city maps throughout history – all in the teaching of the rulers and leaders who distorted the maps and distorted the geographical and political reality.
The extent of migration to Palermo, in rickety boats, which I compare to ancient warships that repeatedly invaded the city, immigrants whose presence is everywhere in the city, are all expressed in my work, like packman’s figures, running all over the city, pakamas that are resembling the domes of the city’s mosques. The exhibition is displayed in a university campus, in Palazzo Crementa Sterri, built in a mixture of styles – Gothic, Arab, Norman, and in the 17th century, it became the Inquisition’s court and cellars of torture.
In all the wings of the compound one can observe countless styles from different periods, and in the cellars of the inquisition – the desperate engravings and scratches of tortured prisoners. I correspond with these desperate engravings with engravings and cries for the help of refugees aspiring to a new life in the city. These were expressed in obelisks I created and engraved “notes” in some 25 languages, embedded in the floor and walls, around the compound.

How do you perceive the subject of mankind’s injustices past and present?

Human injustice – is alive and well today as it was in the past, developed civilisations versus excluded civilisations, zero value to human life, and the cruel absurdity throughout history. In Jerusalem: How is it possible that on a tiny area of about one square kilometre in the ancient city, where the holy places are located, thousands of years have been battling religions, rulers, and millions who have lost their lives. And in Palermo, the situation has been similar since the war of Katargo. In both cities: dominated and controlled human situation is still very visible. Majority and minority, strong and weak.

Where do you see your work evolving from here?

In the future, I intend to wander into other fascinating areas where past and present are interwoven, fascinating history and struggles of control. 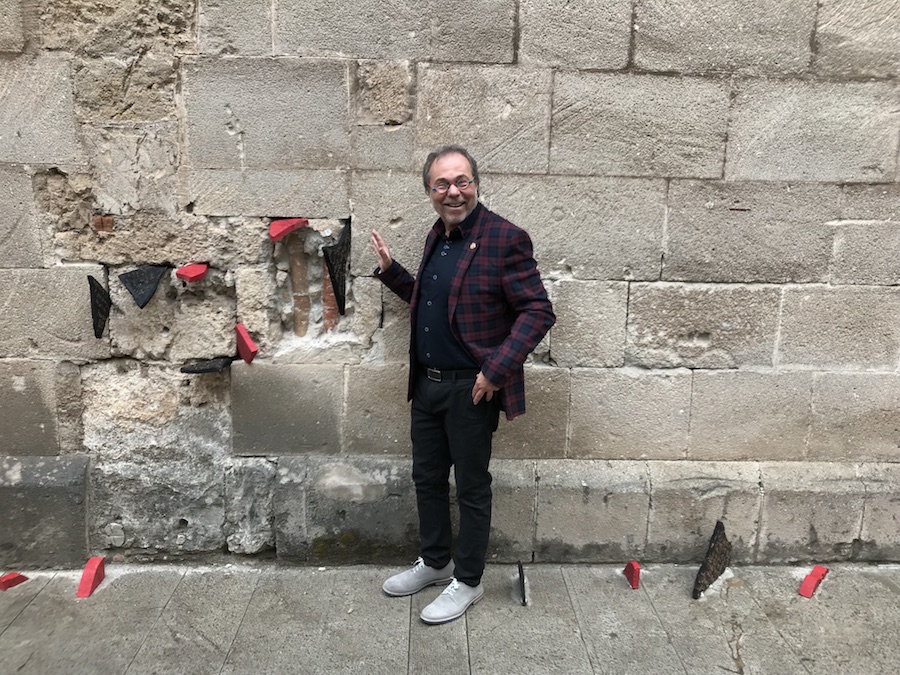 Avner Sher (b. 1951, lives and works Israel) art is deeply rooted in his architectural practice, yet gravitating away from a merely urban and architectural approach or aesthetic. His works are developed in elaborate and physically demanding processes of injuring, scratching, etching, engraving and scorching large-scale panels of cork. His works combine pre-historic elements with child-like symbolism and style, where the trained eye of the professional architect meets the freshness and joyful embrace of an autodidact and outsider artist. Sher’s work has received solo and group exhibitions around Europe and the United States and is held in public and private collections internationally.