Basquiat used what he knew was out there on the streets, the injustices towards black people…

“Who is calling you back for the dead your blonde highlights sticky with blood!” is the first line of a poem Jane Doe killed by the police. It was inspired by the photographer Andre Serrano whose work I saw in 2000 at the Barbican. An image of a black woman lying dead on a slab had me rooted to the spot for what seemed like hours. When I finally dragged my weary brain away from the flagrant image to search out the title of the work, so I could remember, it was, “Jane Doe killed by the police”.

Two poems spilt out of me, rage, fury for the unjust, wrote itself in black and white. The last lines ‘keep calling us America our sleep is too long’ are pointed and political.

Art, poetry, slogans, writ large, are expressions of a society of the unheard, the unjust that keeps on spilling into public view. It has to emerge somewhere, it’s an impulse, it’s a rebellion, it’s the last thing we say or see before the tanks roll in. It’s the individual hitting back with paint…it is graffiti and it is old, as old as the stone it’s written on. 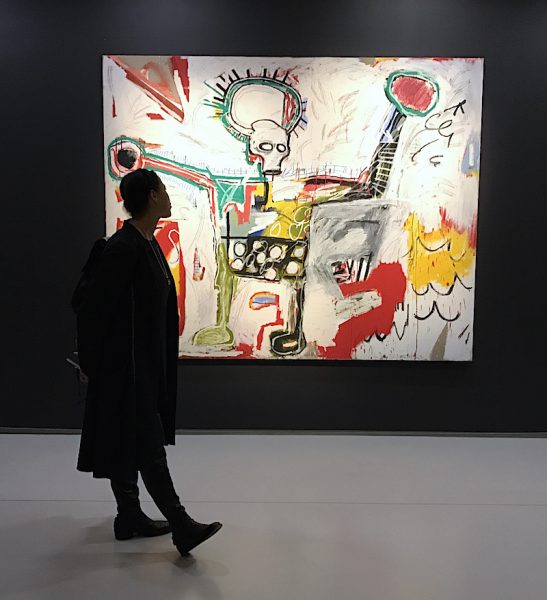 Basquiat  Boom For Real The Barbican

Basquiat was a master, the King of Kings regarding graffiti, yes there were others such as Keith Haring, but Basquiat, though black and Haring white, it is Basquiat’s paintings that have recently sold for $120m dollars. It seems that in this case, though, in the current climate with the rise of far-right white neoliberals, the American elite, is colour blind.

In 1967 when black Americans in Detroit were burning ‘their’ houses down, in response to segregation, brutality and race killings. Basquiat in the late 70’s was running around with white girls, an action that would’ve have gotten him killed at that time in Detroit.  Katherine Bigelow’s latest film is unflinching in its treatment of psychological torture by a group of righteous white men (police) taking back what they see as their emasculation, as two white girls have chosen to hang out with some black dudes and they are apoplectic at the thought that they may have been fucking them.  This leads to the death of several of the black young men and those that escape are broken, their spirit smashed un-healable, like the scars on their face.  One of the protagonists is a singer chasing a Motown deal, after his ordeal he can never bring himself to sing for white people’s pleasure, though this is what his destiny looked like before Detroit began to burn.

Basquiat used what he knew was out there on the streets, the injustices towards black people, his history, their history, music, Jazz, Charlie Parker, Miles Davis fuelled his imagination.  It’s all there overridden in oil sticks, music notations juxtaposed a scratchy portrait of Tiny Grimes, saxophonist, dated Savoy 1945.  He knew that these musicians faced segregation and humiliation bound by the normalisation of a colonist psychosis that they determined the way things were and he knew enough that is was still important when he was rising to celebrity status to document all of this.

When you get close up to a Basquiat, it’s like looking at a mind map.  It’s such an eloquent uncovering of what’s going in and coming out. Out of the end of his fingertips without an interruption, like Picasso’s line drawings.  He loved Picasso and there’s a brilliant work on paper of a portrait of Picasso as a young man and an old man. Basquiat scratched through the image of the old man. He seemed to suck in everything, politics, black history, he made his own culture, he paved the way for other black artists. I heard today from someone who knew him well that he didn’t want to be labelled as a black artist, but in America now as before, being Black is a political stance, they won’t let you forget you’re anything but black first. Jim Crow is alive and kicking.

So Basquiat’s paintings feature a caricature of black people, their trials and tribulations their successes, African masks, Darwin, anatomical diagrams.  He puts it all out there the history of ethnography done on Africans, research to uphold their idea of superiority,  he doesn’t hold back, it’s like a news feed, ferocious, disjointed, relentless. Layer upon layer scratched out, ‘changed my mind’, ‘headline’, ‘ no this is more important!! It’s political, it’s his politics, your politics, it’s loud, it’s shouty’ and he’s still shouting now the same shout – ‘black lives matter’, for every unarmed black civilian that takes a bullet or dies through police brutality. If he was alive today people would still be lining up to buy his work?….I dunno, maybe not because no other black artist since has risen or holds prominence in the art world like him and politics certainly is not dead.

So maybe he got his wish, the art world is colour blind, when you rise to mythical status you’re just, boom!

*Jean-Michel Basquiat, the pioneering prodigy of the 1980s downtown New York art scene. This unprecedented exhibition brings together an outstanding selection of more than 100 works from international museums and private collections. Engage in the explosive creativity of Basquiat who worked with Andy Warhol, Keith Haring and Blondie, among others. Featuring rare film, photography and archive material, the show captures the spirit of this self-taught artist, poet, DJ and musician whose influence, since his death at 27 in 1988, has been enormous.