Screenprints on black plastic bin bags, screenprints of migrants on bold backgrounds painted with house paints named after the positivity and stability they are not afforded, birdcages housing a variety of found and bought objects questioning the freedom consumerism appears to offer, and flags recording the number of detainees at Detention Removal Centres; all exhibited in churches or Cathedrals in London and Manchester. These church-located installations all explore the limits and boundaries, forming our understanding and practices of belonging.

Matilde Damele is an Italian photographer from Bologna, exiled from living and working in New York as a photo-journalist. She experienced what it feels like to be rejected from a community where she had previously built a life for herself. An unexpected and abrupt change – the refusal of a visa after changes to US immigration law – severely interrupted her life and ambitions, causing a permanent sense of loss and displacement. Following this upheaval and an unexpected move to London, she has then seen her personal uncertainties mirrored in the faces of many in immigrant communities here and is now anxious that a similar experience of not belonging may happen again through the imminent threat of Brexit. 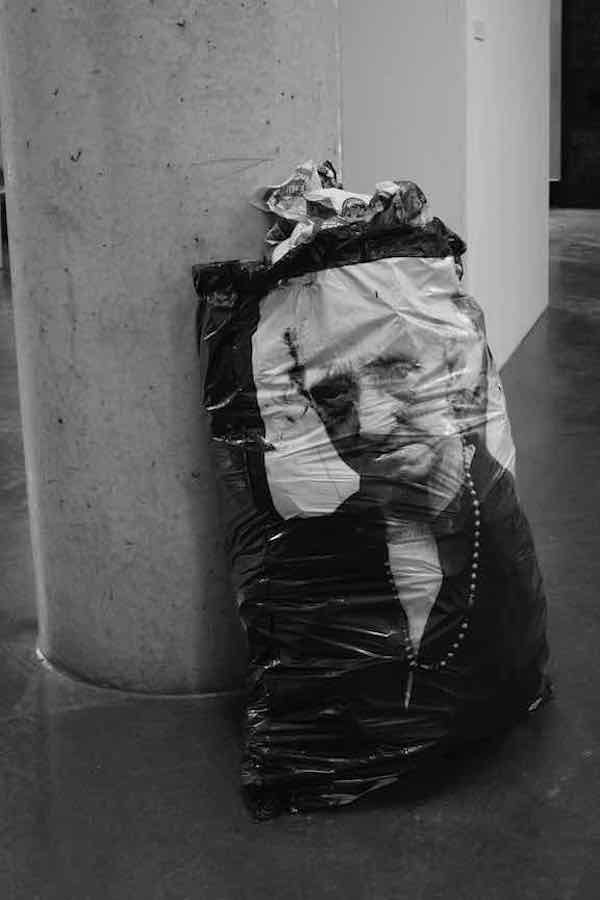 Exiles was Matilde Damele ‘s degree project at Central Saint Martin’s which was, shortly after her Degree Show, shown at St Martin-in-the-Fields. Now she will display these sculptural artworks within the circular space of St Stephen Walbrook. The bin bags on which her portraits are printed are filled with yesterday’s news and discarded packaging, to express how many consider their lives to be cheap, valueless and disposable. The uneven surfaces of these works emphasise the individuality as well as the ephemerality of each of our lives.

Damele has said that the focus of her Project is ‘the anguished man who is not belonging to his own reality and his attempt to give a meaning to life’. As a result, she is looking into fundamental questions on the human condition; ‘What is the significance of existence’ and ‘What is the essence of things’. Her work is filled with an expressive force that explores our sense of not belonging; a humanity that is emotionally homeless and exiled from its surroundings; feelings of estrangement from reality.

Micah Purnell, one of those behind Manchester’s A Belonging Project, has said that ‘much of Western visual culture fosters an unhealthy bias to fitting-in’. He argues that consumerism gets us to part with hard-earned cash for things we don’t need to impress people we don’t really like and is crowdfunding to create an ad campaign Selling Virtues. He notes that Brené Brown sees ‘fitting-in as changing oneself to meet the needs of others’, whereas in belonging; ‘one is accepted as they are’. Grace, he suggests, ‘has the magnitude to give up our desire to change others, to who we think they should be’.

A Belonging Project, to which Purnell is a creative consultant, is using the theme of belonging as a way to consider a range of issues related to social justice. (i.e. diversity, gender, poverty, mental health, homelessness, refugees and others). The Project aims to generate creative responses that can be used to grow a city-wide conversation around the theme of belonging.

The first of these has been three installations over the summer at Manchester Cathedral and St Ann’s Manchester. Elizabeth Kwant’s Mediterranea located bold and colourful screenprints in the Cathedral. These focused on a central figure embodying positions of victory, aspiration, resignation and defeat. The brightly coloured backgrounds were carefully hand-painted using everyday household paint, chosen specifically for their idealised titles, including ‘Utopia Beckons’, ‘Fare Thee Well’, ‘No Boundaries’, ‘California Dreaming’ and ‘Golden Rays’, among others. The resulting works exemplified the tensions and paradoxes between the subject and their designated titles. Kwant spoke of ‘opening up a space to question wider narratives, how identity is constructed and ultimately how history is recorded’.

Her Habeas Corpus, also at Manchester Cathedral, commented on British Immigration Removal Centres by means of prints referencing vintage travel posters while recording the capacity and number of detainees at each location. Colours alluded to institutional architecture and mass-produced furniture found in these public buildings. The prints were then realised as a series of flags, embodying the act of protest while occupying a physical presence within the space. 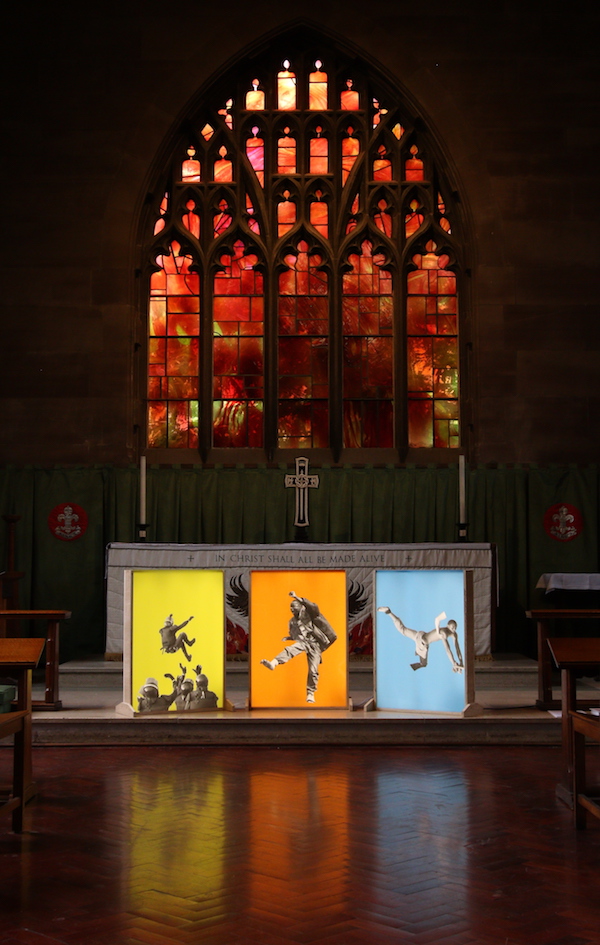 Micah Purnell’s Status Cages was an installation of birdcages at St Ann’s Manchester which housed a variety of found and bought consumer goods, such as books and collections of items, to question the freedom consumerism appears to offer. We all do things because we long to belong. Some are useful and fruitful; others are self-sabotaging and destructive. Capitalist ideology, Purnell believes, aims to impart the notion that we are worthy of love and belonging – but only once we have bought into their product or service.

Advertising props up this notion with the assumption that we are inadequate – stealing your love of ourselves, and selling it back at a price. Capitalism isn’t natural because it drives us to self-interest, which pushes us to private spaces and alienates us from the community and divides us through competition.

These are the first in a series of exhibitions, lectures and art installations with partners during 2019-2021, working with and commissioning artists to work with various groups to help tell their stories. Next in the series will be a neon text installation on the exterior of St Ann’s Church and an exhibition by press photographer Howard Barlow. Barlow has photographed the city of Manchester over the past 40 years, including its music scene, politics and social changes. He will be exhibiting a series of large-scale black and white works over the nave, some smaller prints around the choir stalls and walls, and a slide projection of over 100 images. These will explore the history of the city and how a sense of belonging is found in the city’s communities and activities, especially those that give a sense of ownership.

These exhibitions and installations are intended to create breathing space within the structures of the public square enabling a broader discussion about how we create value to be held. To contribute to the conversation, the Project’s organisers are inviting people to share what belonging means to them. Anonymous contributions can be made at https://ilongtobelong.co.uk/ and then viewed in the resulting online exhibit Wall of Motives (https://abelongingproject.co.uk/wall-of-motives).

The Project explores the role the arts are playing in issues of social justice within our cities and communities and also how the arts enable engagement in theological reflection on issues of justice. It aims to allow artists who are actively engaging in practical justice issues to reflect theologically on what they are doing and why and to broaden the understanding of theologians and the Church of how the arts are being used to re-imagine mission through listening and communicating compassion and forgiveness to the most vulnerable.

The engagement in Manchester of St Ann’s and the Cathedral, among other faith institutions, suggests that this is viable, as does the willingness of churches such as St Stephen Walbrook and St Martin-in-the-Fields to show work such as Matilde Damele’s Exiles series.