I was honoured and surprised when Revd Jonathan Evens invited me to curate a ‘Stations of the Cross’ Group Exhibition at St. Stephen Walbrook, a Christopher Wren church based in the heart of the city of London.

I was astonished when I was granted permission to include a life-size crucifixion of a star wars stormtrooper by artist Ryan Callanan (RYCA).

I was not surprised when members of the congregation started to complain, and journalists and photographers stormed in as the stormtrooper was ordered out!

At the source of my inspiration behind controversial curating in churches is my relentless need to find my brother, Tom – missing since 2003. Tom was (and probably still is) hugely concerned with all matters holy and religious and massively into God, Jesus and Santa Maria. 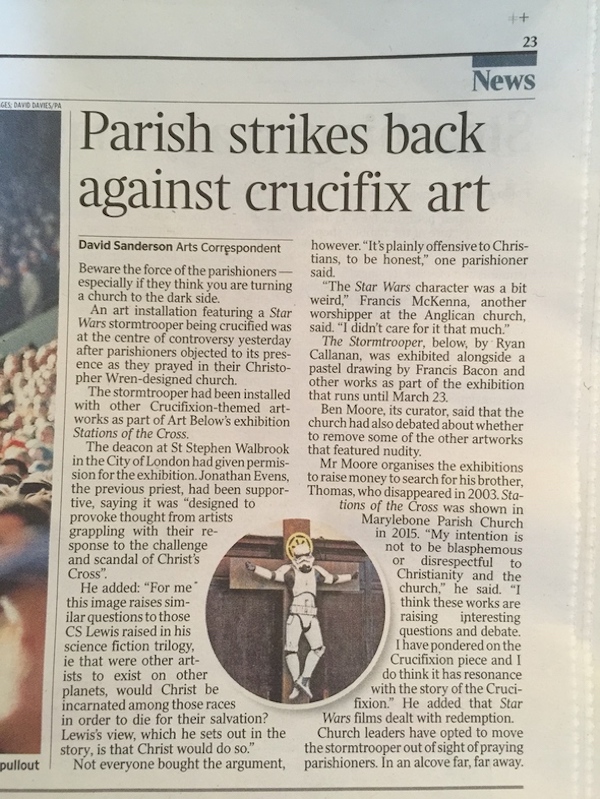 My thinking is that by keying into these areas, I may somehow tap into the whereabouts of my brother. My flirtation with controversy is not designed to upset or disrespect but to capture the public’s attention and direct the focus towards finding Tom.

I exercised this approach in 2015 when I agreed to exhibit a life-size crucifixion of Pete Doherty as part of a SOC exhibition in London’s St.Marylebone Parish Church. ‘For Pete’s sake’ was the joint creation of Schoony – a film prop maker who has ‘turned to the art side’ and Nick Reynolds, son of the notorious train robber Bruce Reynolds and Pete Doherty (friends of N. Reynolds) who had his body cast on the cross. On 6th March 2015 Doherty, Reynolds and I went to the church for our own private view.

With snacks and supplies, we enjoyed a jamming session involving random instruments we found onsite including the church organ! But the focus of the night was on Tom, and we made a short film which found its way onto NME and Sky News. Soon sightings were coming through in abundance. In amongst the plethora of photos of homeless people lay some potential gems that have become key leads in the ongoing search. 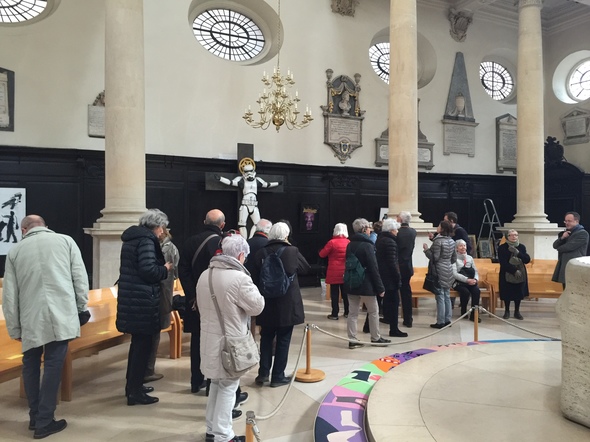 The first exhibition that I curated for Missing Tom was ‘Art Wars’ in 2013 and had nothing to do with religion at all and involved providing artists with a stormtrooper helmet to turn into a piece of art. ‘Turning the Dark Side into the Art Side’

As artists including Damien Hirst, Jake and Dinos Chapman, D*Face and Yinka Shonibare stepped up to embrace the challenge I was granted an entire floor of London’s Saatchi gallery to curate as I please. Since opening at Saatchi in 2013 Art Wars continues to be successful and has exhibited in galleries, museums and art fairs in London, Dubai, Gothenburg, Miami and LA.

My fascination with the crucifixion was first aroused in seeing Mel Gibson’s ‘Passion of the Christ’, (2004) I had already been deeply affected by another film he had made ‘Apocalypto’ (2006) that inspired me to run the London Marathon. ‘Passion’ inspired me to create ‘BHRIST’ a video edit mash-up of Gibson’s ‘Passion’ with Python’s ‘Life of Brian’ – so tightly interweaved regarding audio/visual that it is difficult to know at points which film is which. After editing for 40 days and 40 nights ‘Bhrist’ came into completion in time for Easter 2010. It wasn’t until 2014 that it was finally shown at my first SOC exhibition at St. Marylebone.

This was the first SOC exhibition that I curated, and I felt totally out of my depth embracing this deeply religious subject matter – galaxies far far away from ‘super cool’ Art Wars. What saved me from ‘career crucifixion’ was a strong selection of artists who came forward to embrace the theme including Antony Micallef, Matt Collishaw, Polly Morgan, Paul Fryer and Zavier Ellis. 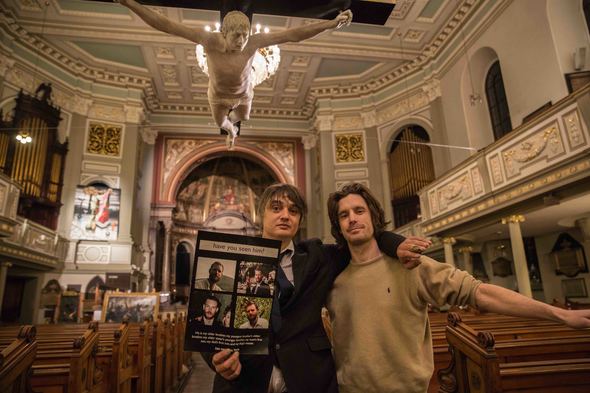 Ben Moore and Musician Pete Doherty ‘For Pete’s Sake’ by Shoony and Reynolds at St. Marylebone Parish Church, Stations of the Cross, 2015

Planned to Run alongside the exhibition was a London underground billboard display of the artworks at stations symbolic to the theme including King’s Cross, Charing Cross, St.Paul’s Temple and Angel. This was supported by my company Art Below that ‘Turns Ad space into Art Space’ in the tube.

Displaying images of the crucifixion in the tube comes naturally to Art Below as it has developed a healthy portfolio for paying tribute to people’s lives including Johan Andersson’s Amy Winehouse poster in 2011, Steve Job’s tribute poster in 2011 and most recently Bernie Katz tribute poster by Nina Fowler. Perhaps Art Below resonates with the ritual of the dead being lowered underground to rest in their graves.

I should have anticipated a censorship nightmare when most of the images from SOC 2014 were refused for public display including Antony Micallef’s ‘Kill Your Idol’ which depicts Jesus being judged by the X-Factor Panel. This was picked up by the Guardian newspaper, and I found myself at a familiar crossroads – Do I publicly express my frustration at the unfair censorship and risk having Art Below shut down or do I say nothing so we can continue only to display work that does not rock the boat?

Last Tuesday as the interview requests started to roll in I started thinking carefully about what ‘crucified stormtrooper’ means. In my quest to curate an interesting art show that raises debate and awareness of Tom, I had disturbed people in their moment of prayer, and that was never my intention. I respect people of faith.
I myself am a believer.

The stormtrooper had been perceived as something dark and evil – the same way the public would have looked at the criminals about to be hung at the Tyburn gallows and those that were crucified as Jesus was.

Maybe the story of Star Wars is more biblical than I first realised?