The Mexican painter Chantal Meza (born 1989) takes us on a deeply moving and challenging journey through the intimate realities of her worlds of beauty and pain. Born into a family of local artisans in Tecali de Herrera, Puebla, Chantal draws upon the history of local artisan techniques by using her hands as brushes. In doing so, her work captures the movements, feelings and intensities of the raw realities of existence in all their complex and unsettling ways.

“Is there a more compelling reason to write, paint and create than to feel and express the intimate beauty and pain of the world?”

She was young, beautiful and terrified. Alone she was led into the interrogation room. The smell of death was overbearing. Walls echoed the screams of tortured memories. Dark shadows becoming silent witness to many victims who had endured the most indescribable torment. Her violated body was already full of the penetrating scars inflicted by those who showed utter disregard for her life, her humanism, and her right to exist on this planet. She was nothing in their eyes. Meaningless. Expendable. Another throwaway object to be brutally cast aside on the scrap heap of a fateful history.

Her body was eventually found three weeks later. At least it offered some form of closure, they said. But what did it mean to find their daughter in such a ravaged state? Torn apart like a worthless piece of flesh. How the memory of suffering persists. Carried on in the countless nightmares and visions lasting a lifetime in the minds of others. Disappearance. Reappearance. There is no comfort in the absence or the recovery. Only the pain now that travels in the thoughts, tears and tragically altered lives of those who will always carry her.

And what was her crime they asked? Was she guilty of simply believing in the wrong ideas? Had she just happened to read the wrong book? Maybe she perished for standing up and fighting for a more equitable world? Then again could it be something more arbitrary? Perhaps it was the darker colour of her skin? Being seen in suspicious company? Maybe it was an overheard conversation? Or worse still, it was just a case of some mistaken identity? In truth, for her persecutors, it doesn’t really matter. She was put on trial for her very existence. 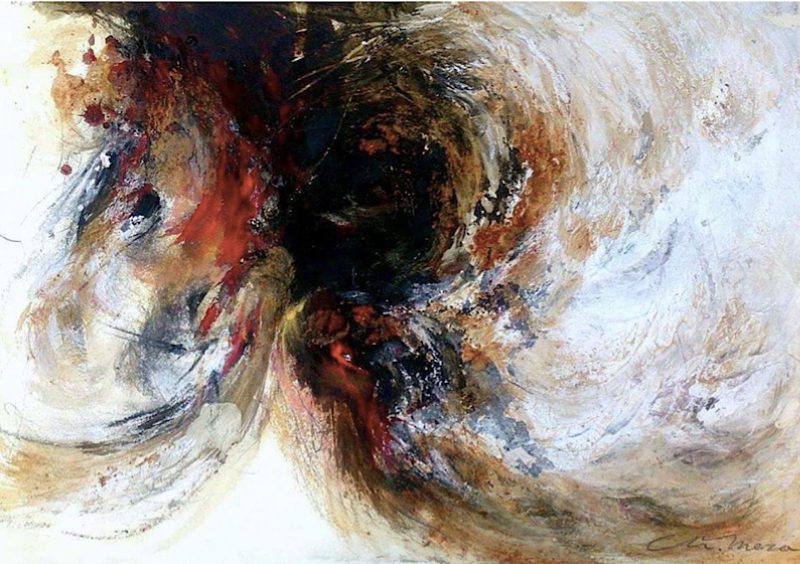 But just as she is now yet another entry written into the brutal history of the human condition, the death doesn’t end with her wretched body. Acquaintances, investigating journalists, human rights workers, concerned family and friends; soon are all caught in the ravaging crossfires of the violence. And the more the violence takes hold, the more it assumes a life of its own. Everything gets drawn into its orbit, bystanders, women and children all brutally consumed in an indiscriminate massacre of the innocents.

And so we are compelled to search for answers. Denial. Cover-ups. Miscommunication. But we are looking in the wrong places. We soon learn there is no such thing as the State. There are only its power and its violence. Its flags, parliament buildings or border walls are mere facades. The State always was flesh and bone. Its lines, tangled, consciously blurred and overlaid with deception. A real Leviathan – the body politic – but instead of delivering happiness, hospitality and hope, now revels in devastation, destruction and death.

Such violence feels its way into existence. Trusting nobody, fearing everything. That’s the real meaning of terror. There is an intimate reality to its appearance. Terror is not the fear of the unknown. It is the fear of something all too close, all too familiar. The home is no longer a sanctuary. Familiar streets are filled with vulnerability. Neighbors become enemies. Passing cars motor to the promise of potential abduction. And a simple walk alone, now the opportunity to imagine you may never return to see your loved ones again. How quickly it becomes normalised. Terror normality. Abducting every feeling and thought in a ritualistic nightmare of the haunted mind.

But to accept this violence would be to normalise the wounds that tear apart the bodies of the living. Allowing every scar left upon the body of the victim to become another weeping cut into the flesh of the earth. And so this world needs to remember. It needs to bring back the memory and life of those otherwise condemned to be forgotten. It needs those committed to justice to have the courage to speak truth to power. It needs the critical writers to explain the atrocious. And it needs the artists to provide a visual testimony in this ongoing battle over the shattered landscapes of memory and all too human suffering.

Chantal Meza found initial expression in painting so that she could deal with personal loss and heartbreak, the artist who has been the recipient of a number of prestigious national awards for emerging artists, featuring in both national and international press, has more recently turned directly to the political problem of violence and arguably the ultimate challenge for artistic and philosophical interventions – the problem of human disappearance and displacement.

Even when we confront the worst of the human condition – our capacity to inflict the most inhumane acts upon one another, political philosophy and aesthetics requires the presence of the disfigured and the violated body for its rescue. But how might we respond when facing the absence of such presence? And yet it is precisely by going beyond these limits, where we find the true value and meaning of the arts as a form of political intervention and awakening. What is the purpose of aesthetics after-all if not to make the invisible visible?

In her current State of Terror project, Chantal counters this violence by confronting directly the realities of the most intolerable conditions. Her state of terror is a state of mind – working in the name of those who have needlessly suffered. It is not abstracting. It is intimate and it’s personal. The darkened spaces point to penetrating wounds out of which the blood of life seeps. She enters into the world of the victim, the girl, alone in the room. Her work begins as a personal journey as much as it speaks to wider concerns. She opens her eyes to the violence, listens to the helpless screams of pain, immerses herself in the suffering to ask about her position in this world. 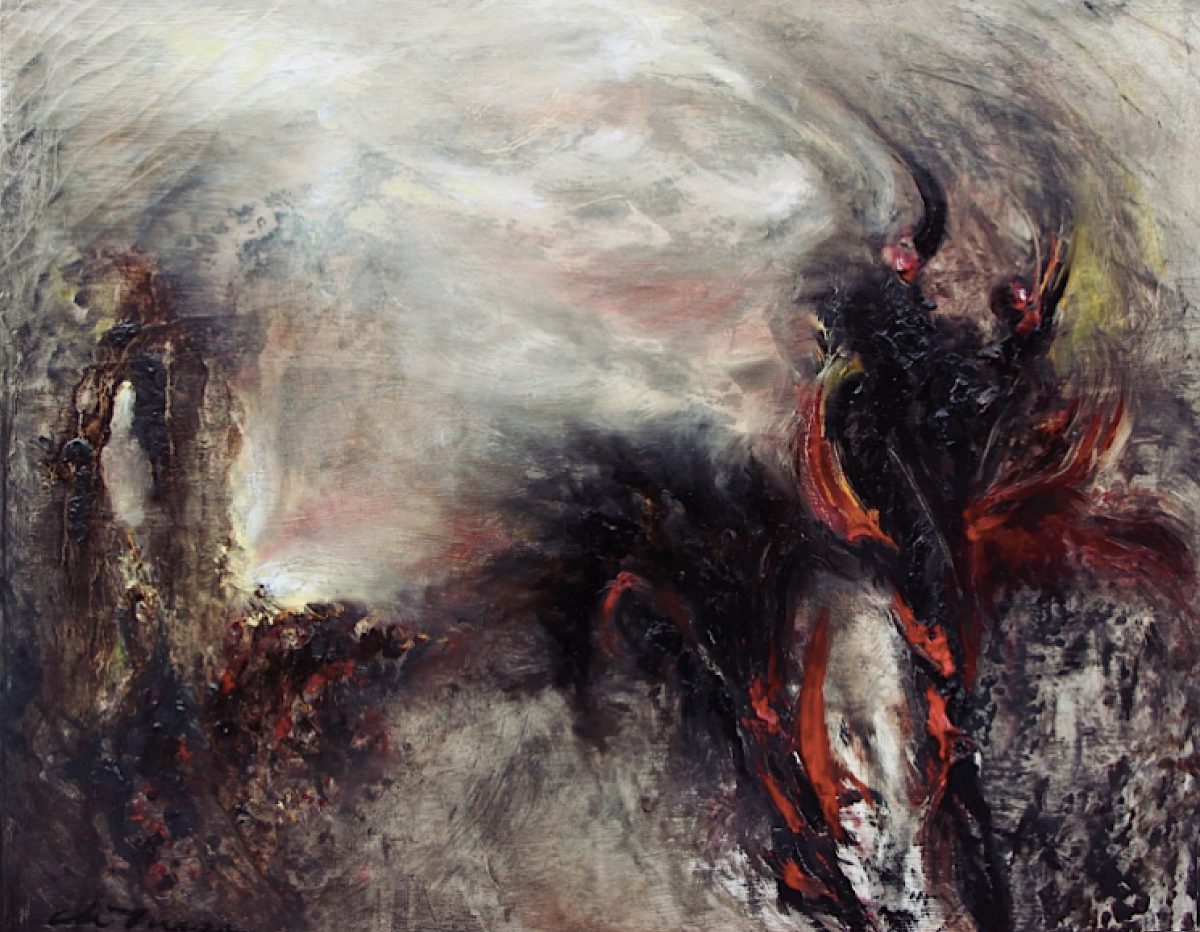 And yet there is a larger story here, for the same darkened spaces also appear like expanding black hole vortexes pulling everything into its nightmare vision. The artist paints pain, anguish and despair of a people and its history, which continuously retells stories of devastating loss and its aftermath. The blood stained canvases, populated by demons, monsters and wretched souls, testify to the worst of the human condition – our capacity to inflict the most inhumane acts upon fellow humans who are afforded no dignity or rights.

Whatever the subject matter for art, comparisons will always be made with the work. The timelessness of violence in particular invariably invites such conversations. To say the intimate depth of colour invokes memories of Mark Rothko’s deeply moving mindscapes; the engravings stylistically comparable to Francisco Goya’s Disasters of War; the disfigured movements reminiscent of a Francis Bacon scream; and the contorted bodies and lines reminding of Pablo Picasso’s Guernica. But to make such comparisons misses the point. It would also be a grave injustice to the subject of violence and the importance of the work.

While all violence reveals historical continuities and traces in its ambitions, its claims and its denials, it also needs to be dealt with regarding its specificity in time and place. We are always confronting new demons, new monsters, which require new conceptual language and demands for justice. Each violation of each unique individual is after-all different. And it needs to be addressed in those terms with sensitive ethical care and genuine compassion.

This is the real power of Chantal Meza’s work. It provides an original aesthetic vocabulary and visual testimony, where terror bleeds into memory, forgetting into public recognition, and most importantly, the nightmare into the dream of a better land for her people and its future. Chantal’s state – her Mexico – is not some place that objectively appears on a map. It is imagined, and it is all too real. And like the violence it confronts, its real depth is a field of emotion, feeling, sensation, desperation and hope. Chantal confronts wounds that have existed before her, to ask how we might outlive their unique repetitions.

We are still it seems incapable of answering the question when is too much killing enough? The statistics keep accumulating, revealing the darker side of our infinite potential. Everything is possible means just that. It can be liberating, and it can be devastating. But the statistics can also mask the real horror of the violence. How many disappeared without a trace? How many more women are victims of femicide? How many children’s dreams savagely cut short? It is not about the hundreds of thousands of lives being needlessly ripped apart. It is the story of one life denied its very humanity countless times over.

Engaging with the problem at this all too human level, Chantal’s work is not then about some confession. There is nothing to confess. The destruction of a life, which simply demands its right to life with freedom, integrity and dignity, is not a crime. Chantal’s work instead provides us with a forceful opening into the thousands of wounds inflicted upon the bodies of innocent victims. It is a silent visual cry, which demanding immersion and reflection speak louder than those who try to reason and justify why such abhorrent acts occur. I could, therefore, do no better than to end with the words of the artist herself:

‘What art can reflect, at its best, is the awareness we have an enormous potential to transform without harming and that we have the real and tangible capacity to recreate this reality. Art can be the counterweight to violence. It is the poetry of nature’.

The State of Terror project is currently in production and partnering with the histories of violence project (www.historiesofviolence). It will be completed and exhibited in 2018/19.