Charmaine Watkiss is the daughter of Jamaicans who came to post-war Britain in the 1960s when immigration from former colonies was encouraged to help with the significant labour shortage. That experience is central to the life-sized drawings she makes – of herself, but as characters constructed to explore ideas around diaspora, ritual, tradition, ancestry and cosmology. I caught up with her at her first institutional solo show, The Wisdom Tree, at Leeds Art Gallery, where five of those large drawings are complemented by smaller works. 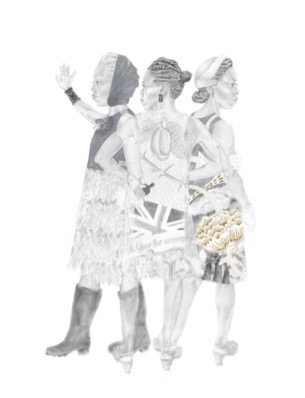 ‘They Didn’t Come to Stay’ is the oldest drawing here. What does it show?

It’s a homage to the Caribbeans who came to Britain in the 1940s–70’s [i]. The figures can be seen as three separate women from different times or one woman at different stages of her life. On the right, a young maiden is about to set out on her journey. The central figure embodies the fight for equality in the 1970s. The woman on the left represents the Windrush generation today.

Why do they overlap?

Whenever I draw inter-generational figures, I overlap them.

What is the golden flower on the young woman’s dress?

When I was making this work – a year before the Windrush scandal broke – I googled ‘Windrush’ and this floral motif popped up prominently, as it wouldn’t now. So I wove some of this William Morris design (from 1881-3) into the clothing, and it’s become a trope: whenever I speak about the Windrush generation, I use this motif. The myth was of being invited to a country where the streets are paved with gold. But we know that wasn’t the reality, so I used acrylic paint – Fool’s Gold, not 24-carat gilding on the floral motif to drive this message home.

I remember going to Brixton Market with my Mum, and that way of standing with hands on hips is typical, lots of people recognise it. You’re not going to mess with that woman! The dress has a collage[ii] recording a march in the 1950s – referring to the struggles that generation had trying to settle into the country.

Is she owning the issue by wearing it?

Yes, though I’m also thinking of the way we can have images or concepts projected onto us, but with the clothing, you can remove that. All three are in their Sunday best, with the gloves. My Mum was a dressmaker, and for people from the colonies, the way you present yourself was very important. That links to the expectation of politeness and decency, which is a source of pride but with an element of repression, of not being true to yourself. I was very aware of the difference between the Caribbean Patois-speaking culture inside the home and the outside world where you had to be English.

And the older woman?

I gave this character armour because lots of my parent’s generation were saying: ‘This is our country now, we belong’, but I just felt that wasn’t quite so… By the time of the protests in the 1970s, we’d been told we were not welcome, despite being invited, so there was a need for protection. I used silver gilder’s wax to reference Leonardo’s silverpoint drawing[iii] of a man with a lion on his armour. 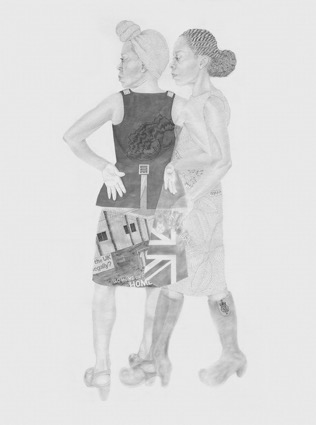 In 2018 it emerged that hundreds of the Windrush generation had been wrongly detained, deported and denied legal rights. How does ‘Facing the Wind’ respond to that?

Some Windrush claimants had died before receiving compensation[iv], so there are two figures instead of the three, because that generation is aging and dying. I incorporate the Justice and Chariot archetypes from Tarot cards – the former representing fairness, the latter determination to overcome challenges. Justice has the scales in her hand, and keys – but the lock can’t be opened. The Home Office’s symbol is on her boot as a play on the designer logos you find on clothes. The other figure has the Yarl’s Wood detention centre[v] on her skirt, and is wearing a charioteer’s armour. She’s taken charge and is ready for the battle. 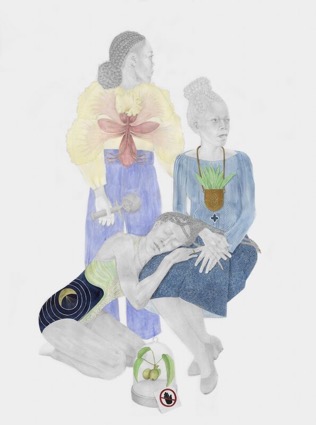 ‘The Matriarch I’ combines history with botany. How did you arrive at that?

My Mum was raised in the Blue Mountains of Jamaica, where they lived off the land. When I was growing up, she treated me and my brother with herbs. The scene is about the different ways in which women have used agency, each have their own story to tell about liberation.

What are the plants?

The standing figure has the pride of Barbados flower on her back, designed to look like a beautiful blouse but telling the story of how the seeds of this flower were used as an abortifacient by enslaved women. In her hand she holds a fertility doll. The seated figure, the matriarch inspired by the African ‘Queen Mother’ archetype, wears sage around her neck, used when dried for clearing a space – so not just for ingestion, but in ritual. At the front is a cutting from the highly toxic manchineel tree. You can’t eat the apples, and if you just stood under a tree during rain you would get burned. The sap was used as a poison by the enslaved, and so represents resistance.

These full-colour drawings are a new development, well suited to flowers. But you don’t colour the flesh?

I want to retain the integrity of drawing, which is why I use just graphite for the figure itself. If I coloured the faces too, it would become more like a watercolour. I love the intimacy of drawing: it feels private, it allows for attentive mindfulness. Also, colour would raise the question of skin tone, which is not the focus of my work – and so could detract from the story itself…. 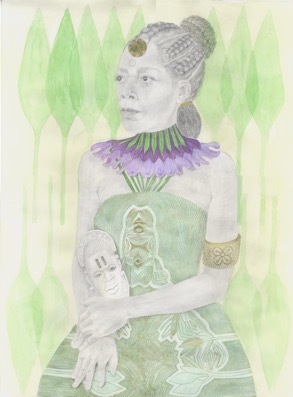 Two of your six medium format’ Plant Warriors’ are also on display in Leeds. In what sense are they ‘warriors’?

I picked six plants which my parents’ generation used as healing balms, strengthening their bodies in preparation for leaving the home space and needing to be warriors in the world. I wondered what it would be like to embody the plants in human form. So the warriors wear neckpieces of the flowers of the plants, the kingdoms of which rule over them.

Is your work about the Caribbean specifically, or is it wider than that?

The Caribbean comes with historic and cultural connections to Africa, and I’ve done my ancestry DNA: mostly Nigeria, partly Benin. So in looking at women of the diaspora, I’m interested in what got from Africa to the Caribbean, as well as what came from the Caribbean to Britain. It’s also worldwide, as leaving your homeland and having to adjust is a common experience now – many people find elements of their own stories in my work.

Finally, you’re a slight 5ft 1″. What do people make of that?

They always seem surprised that I am a foodie – love food, love eating, love cooking, love talking about food… I guess being a small person people are not expecting that of me.

Charmaine Watkiss continues at Leeds Art Gallery to 30 October. You can also see her work in ‘Drawing attention – emerging British artists at the British Museum to 28 August. Images courtesy the artist.

[i] The generation often named after the Empire Windrush, the ship that brought one of the first groups of West Indian migrants to the UK in 1948.

[ii] The dress has a drawing referencing the demonstration against the Commonwealth Immigration Act, led by Claudia Jones, 1962. She founded the West India Gazette, Britain’s first black newspaper, and set up the Notting Hill Carnival

[iii] ‘I made a few study drawings of Leonardo da Vinci’s Profile of a Warrior in Helmet (1742) at the prints and drawings study room at the British Museum, and was then inspired to incorporate the warrior’s armour on the older woman in my drawing.’

[iv] At the time I started this drawing in November 2020, I had read that 9 people had died whilst waiting for compensation. Now that figure is considerably more – 23 to date)

[v] Many who were accused of being illegal were held at the Yarl’s Wood Immigration Removal Centre in Bedford, even though they had lived in Britain most of their lives