Christopher Gray was born in 1965 and has always lived and worked in London. He first started making the boxing puppets when he was a young boy and has never stopped developing the concept, but it wasn’t until he went to art school in his late 40s that he started to exhibit his work. After graduating from Goldsmiths in 2015 he won the XL Catlin Art Prize 2016 for a film called Death by Chair and was also selected for Bloomberg New Contemporaries in 2016. Paul Carter Robinson talks to the artist about the future of his practice at the private view of his Arts Council England sponsored exhibition at J Hammond Projects in the Bomb Factory.

AL) How do you describe your practice?  (include mediums, conceptual and visual references)

CG)   I work with hand-puppets, film, performance, sculpture, and drawing. I replicate the human figure with my hands, using prosthetic limbs, my own sculptures and often chicken skin because it’s very similar to human flesh in the way it cuts and bleeds. My work is about conflict and how violence is portrayed in mainstream culture, especially in the cinema.

AL) Who do you sight as your main influences and how have other artists impacted on your work over the years?

CG) My first real influence was Auguste Rodin. I was hugely inspired by The Gates of Hell and his depiction of the human figure. Later on, I became fascinated by the work of Francis Bacon and how he depicted violence as inherent in human nature. Bacon saw a kind of beauty in violence that I recognised. 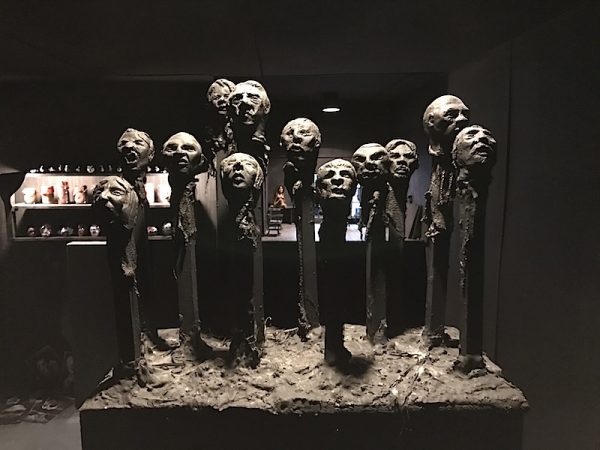 AL) Could you talk about your latest show at J HAMMOND PROJECTS and how the ideas for the exhibition came about?

CG) This exhibition directly follows an artist residency at J HAMMOND PROJECTS called 50 DAYS. I completed most of this body of work in the gallery over that period, regularly consulting with Justin Hammond and working with a technician on the design and build of a dark, ramshackle edifice. I’ve made two new films and a number of sculptures and film sets. The major themes are passion and violence and I explore notions of sexual objectification, gender role-play and the reversal of power. The films centre on Dumas, an artist tormented by his tempestuous relationship with his muse. Dumas engages in bare-knuckle fights to alleviate his tension, but as he struggles to capture the beauty of his muse on the canvas he is tortured by visions of a demon and brutally stripped of his power.

AL)  How much has the genre of the horror film played in your work?

CG) It’s always been an important influence. My fascination with horror began early and I have seen first-hand the way in which horror and depictions of violence have fed into mainstream culture. Horror is an everyday occurrence in our society and I’m interested in how the replication of violence and fear has caused it to be so widespread and ambiguous. 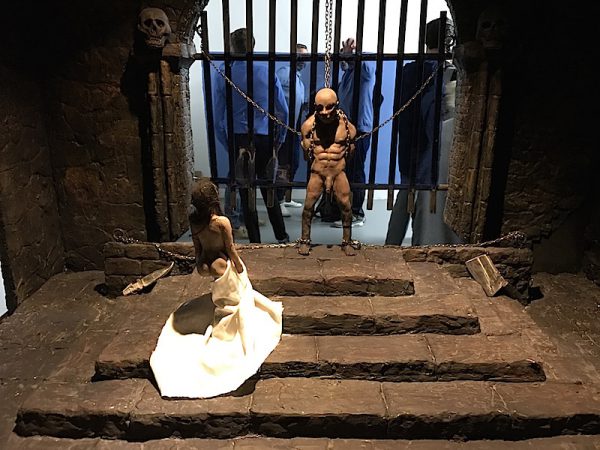 AL)  You were a professional boxer before you studied and became an artist how has this impacted on your subject matter and the brutal fantasy involved in your practice?

CG) Unfortunately, after a promising amateur career, I was denied the chance to turn pro due to medical conditions. At the time I was 100% committed to becoming a professional boxer and it was a devastating blow. But, as a hobby, I had already begun to use my art to imitate my boxing skills. Now I stage live boxing matches using my puppets. Before stepping into the ring I experience the same adrenaline rush that I used to get before a fight. When I boxed we didn’t use head guards and it was quite brutal. As a boxer, you have to be ready to engage when the bell goes. You have to be able to tap into that violent part of your brain, which is a primal instinct that is often redundant in modern society. In my films, I try to tap into that same primal instinct and replicate a physical act of violence. I want that feeling to be as authentic as possible.

AL) How do you see yourself evolving over the next few years and are there any other interesting projects that you are working on for the future?

CG) I want to continue to expand in terms of the scale and ambition of the projects I tackle. With this project I’ve been fortunate to have the full support of the gallery during the 50 DAYS artist residency, allowing me to incorporate so much of what I do into a single exhibition. It’s been intense but I’ve been able to fully express myself and I can’t wait to push even harder.