And you thought the Eden Project was just about biology!

This Summer, Cornwall’s Eden Project has unveiled new permanent sculptural works by Julian Opie and Ryan Gander installed in the grounds. This tops up the collection which already includes works by Tim Shaw, El Anatsui, Studio Swine and Peter Randall-Page.

There is also a temporary exhibition co-curated by Misha Curson and Blanca Perez Ferrer inspired by nature and its relationship with (AI) Artificial Intelligence and creativity. Sculpture by Jenny Kendler has also been installed in the grounds, alongside a residency with Hayden Dunham who has created a whispering sound piece at the top of the rainforest section.  All the artists have been inspired either by the Eden Project’s surroundings or by the narratives that the Eden Project communicates including sustainability, climate change, biodiversity and the vital relationship between plants, people and resources. 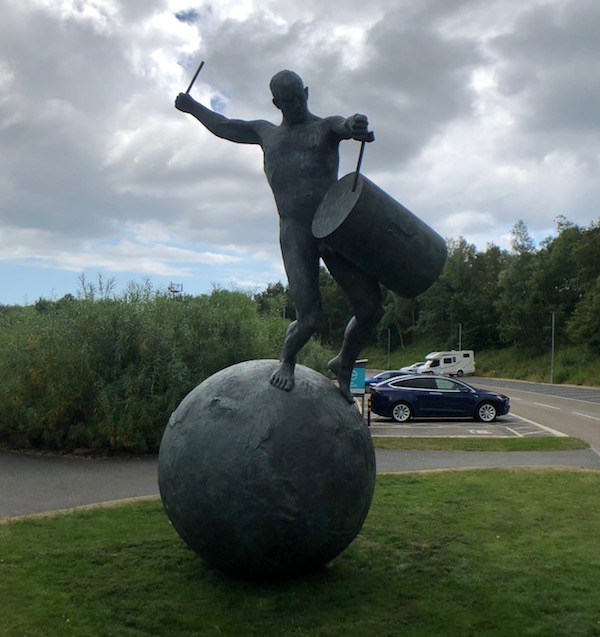 The Eden Project was launched as part of the millennium cultural initiatives nearly two decades ago, and since has generated over two billion pounds for the region. It’s a unique, internationally recognised educational resource working towards a sustainable future. It has provided a gateway into the relationship between plants and people giving an insight into the story of human co-existence with the natural world.

The Eden Project was the brainchild of Timothy Bartel Smit who after a successful career in the music industry as a composer and producer moved to Cornwall to create a new and better life for his family. Tim is a great lover of art, especially sculpture and has commissioned many works for the project. His vision makes an inseparable connection between nature and art and he blends it seamlessly.

It’s a fantastic experience to stumble upon the artworks in the overgrown flora. An early example of Ghanaian El Anatsui’s tribal posts made of heartwood is found next to a heartwood tree growing in the rainforest section of the project. It was explained that the local Cornish docks were also built from the same wood so there is a regional connection to the sculpture. 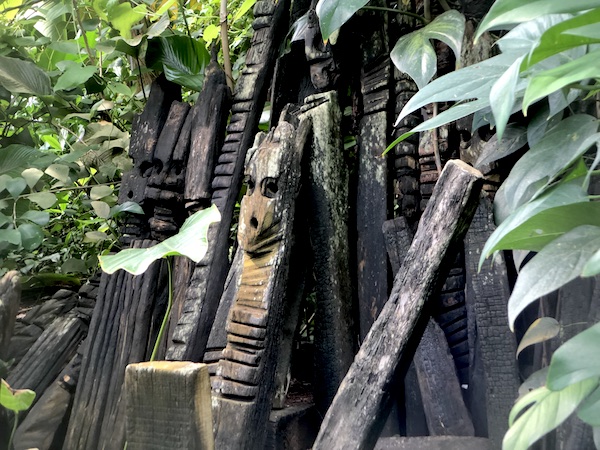 Artist in Residence Hayden Dunham at the Eden Project

Hayden Dunham will conduct field research at the Eden Project relating to her central preoccupation with how the chemical make-up of external systems informs and influence our internal infrastructure.  Her research will culminate in a performance work that will be realised at the Zabludowicz Collection in Belsize Park, London.

Jenny Kendler’s work Birds Watching asks us to consider our own responsibility for climate change’s myriad effects on other beings.  The newly adapted work, first commissioned for Storm King Art Center, New York State, is a 40-foot long sculpture composed of a ‘flock’ of one hundred reflective bird’s eyes mounted on aluminium. This piece has been developed through a partnership with the Natural Resource Defence Council. 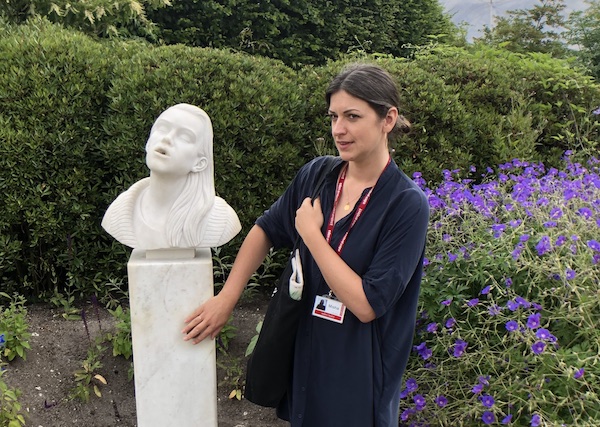 To employ the mistress… It’s a French toff thing by Ryan Gander is a marble fountain fabricated in the likeness of his wife, Rebecca, playfully spitting water.  The work plays with the tradition of fountains in classical gardens where mythological divinities, imaginary animals and other strange creatures are turned into whimsical springs. This sculpture was originally commissioned by The Highline, New York. “Eden has drastically reduced single-use plastic across all its operations. I’m so pleased to offer our visitors this beautiful alternative to plastic water bottles, connecting the every day with the esoteric” said Misha Curson, Senior Arts Curator at Eden.

Tim Shaw’s The Drummer is inspired by the steely resilience of Cornwall’s people: those who mined tin for generations and the fishermen who battled against the sea.  The work is cast in bronze, an alloy composed of copper and tin – a homage to Cornwall’s heritage. 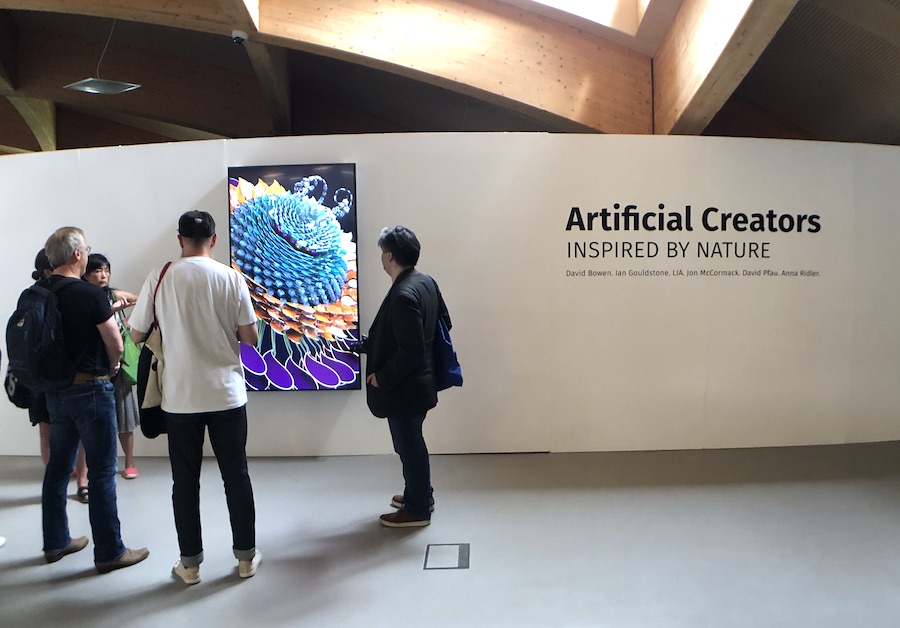 Austrian artist LIA is considered one of the pioneers of software and net art and has been producing works since 1995. Her practice spans across video, performance, software, installations, sculpture, projections and digital applications.

LIA’s contribution to the exhibition, Tentasho, uses a single algorithm to create images and animations that constantly transform and adapt. Tentasho explores the countless, striking variations of imagery that emerge from a restricted number of controlled parameters and brings forth outcomes that are often unexpected and surprising.

Anna Ridler is the winner of the 2018-2019 Dare Art Prize. She works with collections of information or data and explores how new technologies, such as machine learning, can be used to translate them to an audience.

Her work, Blomenveiling, draws historical parallels between the “tulipmania” that swept across Netherlands and Europe in the 1630s and the current speculation around crypto-currencies.  The work shows tulips, created by AI, blooming, corrupting and dying in an updated version of a Dutch still life for the 21st century.

Jon McCormack is an Australia-based artist and researcher in computing. Since the late 1980s, Jon has worked with computer code as a medium for creative expression. He is inspired by the complexity of a diminishing natural world.

Jon’s artwork, Fifty Sisters, comprises fifty images of computer-synthesised plant-forms.  The piece explores humans’ relationship with oil and how this relationship is affecting the natural world. It is derived from the primitive graphic elements of oil company logos.

Ian Gouldstone is a BAFTA-winning artist and filmmaker whose work incorporates games, animation and new media. Ian is a founder of the Australian games collective Pachinko Pictures and is a trustee of Deptford X, London’s longest-running contemporary art festival.

Ian’s piece, Wanton Boys, is a large-scale digital art installation about the containment of artificial life, staged within a very dark space. Within this space, there are a large number of white towers made up of stacked, small plaster cubes. These structures act as projection screens for simple yet colourful geometric creatures, which move and bounce off the walls of their plaster containers, not able to escape.

David Bowen is an award-winning studio artist and educator whose work has been featured in numerous group and solo exhibitions nationally and internationally. Using intersections between natural and mechanical systems, David produces unique relationships within sculpture and installation.

David has created an installation called tele-present wind. This piece consists of 126 tilting mechanical devices connected to thin dried plant stalks installed indoors and a dried plant stalk connected to an accelerometer positioned outdoors. When the wind blows, it causes the stalk outside to sway, allowing the indoor installation to move in real time and in unison with its outdoor counterpart.