When Cristina Iglesias (b1956) launched her most ambitious – and many say her best – artwork to date in her home town of Donostia-San Sebastián in June 2021, the event caused a major stir in her native Spain but barely a ripple beyond; thanks to ongoing pandemic restrictions, none of the international arts or tourism press could attend. But the wider cultural sector’s loss has been San Sebastián’s gain. For the first four months of its existence, this immersive, spectacular piece of public art has been enjoyed mainly by locals and Spanish visitors – or possibly people creeping over the southern French border, only 15 miles away.

It will be a place to observe and think, to reflect on nature and the importance of conservation – CI

The journey begins with a boat ride. ‘The artwork starts before you leave the shore,’ says Lourdes Fernández, Iglesias,’ head of the art office Artingenium, which project managed Hondalea and fellow San Sebastiána who worked tirelessly with Iglesias from her Madrid studio to make this landmark happen; she has miraculously facilitated my trip to the island out of season (from June to September 30th is when the public ferry service runs). I am thanking my lucky stars for having arrived, on the off chance, on an October weekend of calm seas and sunshine – these waters are choppy at the best of times and the boat service won’t operate if there’s too much turbulence. I am also grateful my request coincided with a delegation of Spanish tourism officials wanting to see Hondalea, as it’s called, so I gatecrash their trip to find out what all the fuss is about. 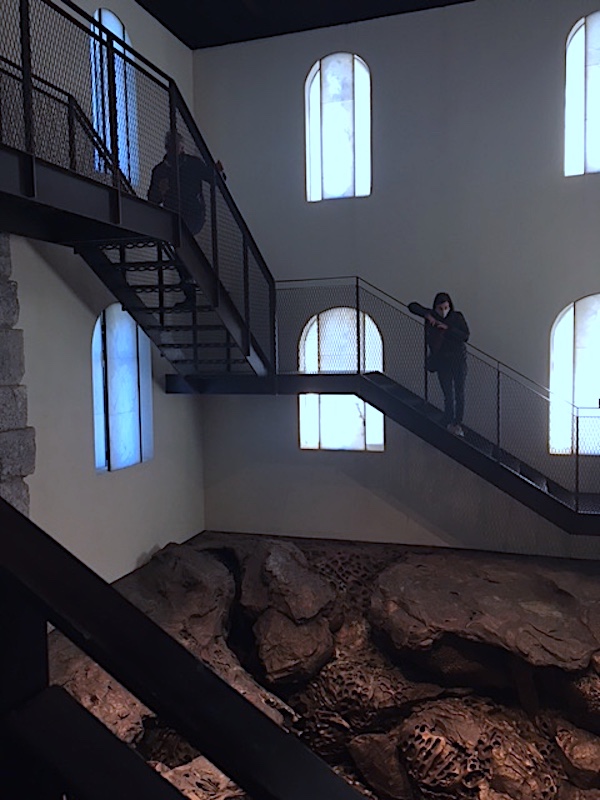 What Cristina Iglesias has curated in Hondalea is an entire sensory adventure, animating a part of San Sebastián’s iconic seaside landscape – the middle rocky outcrop out of the three that frame its widest sandy beach, Playa de la Concha, and which constitutes the uninhabited island of Santa Clara. The beacon that still blinks regularly from its peak is now remotely operated – the last lighthouse keeper having left in the 1960s – and the island is rarely visited except in the summer by intrepid swimmers (from the beach, it’s a mere 1,500 metres, I’m told). But that lonely light, blinking from the island in the middle of the bay, is part of the magic of San Sebastian at night: one striking, solitary element within the strings of seafront illuminations that render magical this rugged coastal resort, contributing to its striking, ever-shifting atmospheres: mysterious in the mist and frequent rains; festive on a clear night.

On this day, the sun shines as the boat pulls up to the small jetty. And we make our way up the cobbled footpath – renewed and reinforced for regular visitor activity – to the lighthouse whose white rendered façades and window frames have also been substantially restored, rescuing it from its previous derelict state. Pausing at the top of the hill, we enjoy the scent of wild shrubs and trees that have thrived here undisturbed for decades and look back onto the sea (peppered liberally on this weekend morning with swimmers and paddle boarders). It’s a wonderful view, with clear blue waters stretching up to the wide sweep of sandy beach – a special perspective onto the familiar sights of the city.

And then the door to the lighthouse is opened and the floor in front of us falls away to reveal a gorgeous cavern of bronze. Planes of rock-like slabs intersect with rippling, contoured elements forming a lacy network of grooves and hollows (derived from San Sebastián’s actual coastal formations), all of them sloping down towards a curvaceous crevasse at the work’s epicentre. Metal stairs and decking lead us up and around to offer alternative vantage points onto this geographically authentic-seeming construction. Iglesias – whose practice is very much about revealing the beauty of the natural world through her lovingly conjured creations of rock, cavern, crevasse and water – hopes that this new kinetic attraction will draw more people out into nature, onto this spot, and enrich their appreciation of the Basque country’s unique ecology. ‘It will be a place to observe and think, to reflect on nature and the importance of conservation,’ she says in a film accompanying the launch of the work. 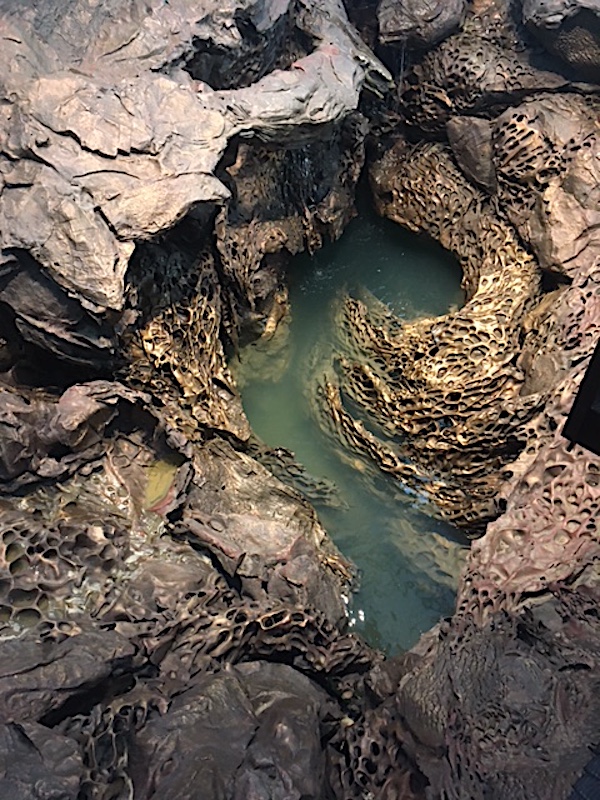 But the thrills are not over yet. Fernández presses the button on a special mechanism that triggers a gurgling, a bubbling, in the freshwater pool at the sculpture’s base. And then, all of a sudden, jets of water whoosh and splash, gushing periodically from different directions, sounding and looking for all the world like an authentic reproduction of the sea’s wave action. It is riveting, thoroughly engaging, acoustically accurate, and lasts around seven minutes. The cast bronze glistens as the water washes over it, throwing light back into the unusual light well Iglesias has created here inside the lightkeeper’s house.

After the bronze elements (around 15 tonnes) were helicoptered into the excavated, 5m hole that had been created for them, the walls were repaired and the lighthouse securely reroofed, with solar panels added to power the aquatic elements, and the lighthouse beacon itself refurbished, complete with gleaming copper roof. Inside the house, high above the sculpture, a matching copper roof panel has been inserted. It glows warmly in the filtered daylight that pours through the alabaster panels Iglesias has placed over the windows. These textures all add to the luminous qualities of this place, to the sense of something sacred and remarkable occurring here.

Iglesias chose this spot out of all the possible sites for a sculpture when San Sebastian’s Mayor Eneko Goia handed her the city’s ultimate accolade (the Golden Drum) in 2016 and announced it was high time they had one of her works there. The result is a timely – some might say overdue – addition to San Sebastian’s other public art icons, complementing the acoustic and sculptural excitements of Eduardo Chillida’s El Peine del Viento (comb of the wind) that sits at the southern edge of the bay, and Jorge Oteiza’s corten steel Empty Construction which bookends Chillida’s on the northern edge. But for its beauty, ambition and all-encompassing impact, I’d say Iglesias’ contribution eclipses them both.