Back in 1977, in the catalogue for ‘Perceptions of the Spirit in 20th-Century American Art’, theologian John Dillenberger argued that Los Angeles County Museum of Art mounting an exhibition with ‘the subject matter of the spiritual in art represents a major shift in contemporary sensibilities.’ The implication was that more such exhibitions would follow in its wake, as it was a turning of the tide. He was wrong. It didn’t happen then but is happening now. Maybe he was right all along, just pre-emptive in his timing!

On 19 February I visited exhibitions in London that demonstrate the breadth of curatorial approaches to art and spirituality; approaches that are expanding and are becoming normative. 19 February was chosen at random; some exhibitions were about to close, some had recently opened. On another date, the shows would have been different, but the overall point demonstrated would have been broadly the same. 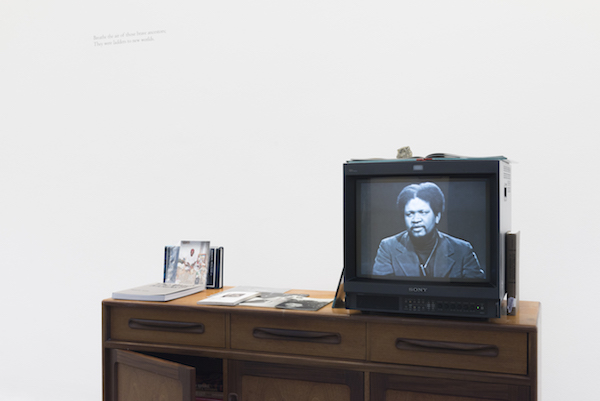 I began at the Royal Academy with ‘Bill Viola / Michelangelo: Life, Death, Rebirth’ which represents the newest curatorial strategy in relation to art and spirituality. The two artists are not paired in order to make the claim that Viola is a 21st Century Michelangelo or that Michelangelo would have been a video artist were he alive today. Instead, they are paired because both explore the big life issues that religions also explore and do so using religious imagery. Michelangelo’s ‘late personal spirituality’ was strongly informed by the ‘Spirituali’ movement of the 1540s and, in the last years of his life, he ‘drew the Crucifixion repeatedly as a sustained and profoundly felt spiritual exercise.’ Viola has steeped himself in spiritual traditions, including periods viewing Renaissance art in Florence and study under a Zen Buddhist teacher in Japan. His work is not defined by orthodox religion but as Revd Canon Mark Oakley has noted ‘offers us a shared way into the mysteries.’

The power of this show derives from the depth of emotional and spiritual engagement with their themes found in both artists and the creativity with which this is offered to us as viewers. Michelangelo was immersed in the religion and spirituality of his time. Viola can review, explore and select from the world’s religions in a way that was not open to Michelangelo. He is, however, by no means alone among modern artists in utilising the languages and iconography of religions to explore life issues in this way.

Mark C. Taylor wrote in Disfiguring: Art, Architecture, Religion that: ‘From the beginning of modern art in Europe, its practitioners have relentlessly probed religious issues. Though not always immediately apparent, the questions religion raises lurk on or near the surface of even the most abstract canvases produced during the modern era.

One of the most puzzling paradoxes of twentieth-century cultural interpretation is that, while theologians, philosophers of religion, and art critics deny or suppress the religious significance of the visual arts, many of the leading modern artists insist that their work cannot be understood apart from religious questions and spiritual issues.’
Many more pairings of this type or exhibitions exploring the questions raised by religion are, therefore, possible. 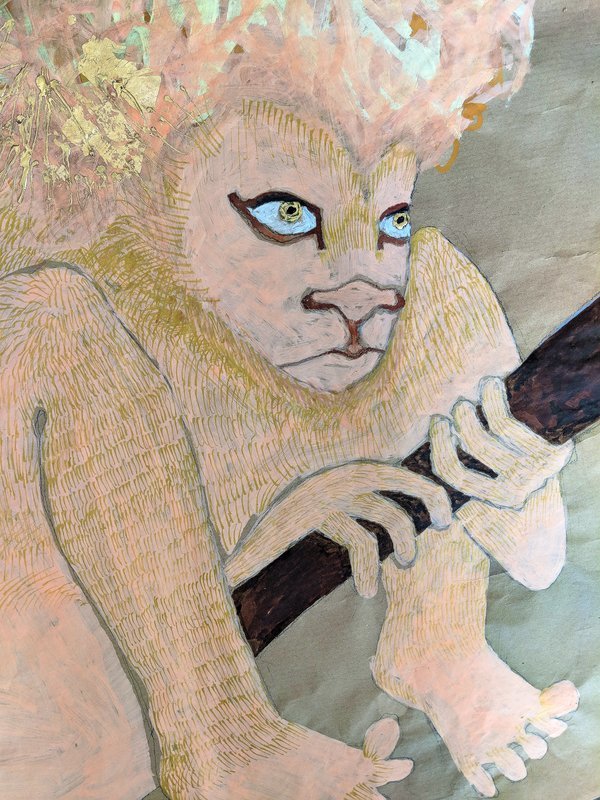 At Tate Britain, Jesse Darling has taken a spiritual approach to art with her exhibition ‘The Ballad of Saint Jerome’. This is not a confessional exhibition or one which explores its themes through religious belief; instead, like Damien Hirst using the Last Supper to explore nuclear proliferation, Darling takes the story of St Jerome and the lion and uses it as an opportunity to explore identity through gender, sexuality, disability, love and companionship. Her exhibition reminded me of Saints Alive by Michael Landy at the National Gallery; in both a real engagement with the lives of the saints is combined with a playful irreverence in exploring the issues their lives and faith raise.

For Darling to arrive at this place of engagement and irreverence, she had first to inhabit the story. One approach to so doing was an epistolary exchange with Revd Christina Beardsley, which prompted both to ‘think a lot, and read a lot, and encounter new stories.’ This exchange birthed the apposite insight from Darling that ‘Art and theology share a lot of ideas and experiences, though the language tends to differ.’

Magic Realism: Art in Weimar Germany 1919-33 at Tate Modern uses the cold veracity and unsettling imagery of Magic Realist art to offer a historical survey exploring the complex paradoxes of the Weimar era. The exhibition is structured in terms of the places or experiences where artists sought to find this combination of the real with the magical, which included Christianity.

This exhibition, and the earlier linked Aftermath: Art in Aftermath of World War, both feature artists who depicted biblical stories in contemporary settings to reflect on the consequences of war (including Winifred Knights, Stanley Spencer and Albert Birkle). Magic Realism has a room exploring Faith (including Birkle and Herbert Gurschner), while ‘Aftermath’ included Georges Rouault’s series Miserere et Guerre (Mercy and War) that adapted biblical imagery to reflect on contemporary experience. In a move suggesting that mainstream curating has now accepted the validity of a continuing but fractious relationship between art and faith as a strand within modernism, the curators have recognised this strand with the art that followed World War I and reflected it as part of the rich tapestry of modernism, instead of overlooking it on ideological grounds as others have in the past.

Also at Tate Britain are photographs from Bohemia-born British-based photographer Markéta Luskačová’s documentary series entitled ‘Pilgrims’, an intense study of the Christian rituals and devotions of Slovakian villagers. Luskačová is one of the leading documentary photographers to emerge in the 1970s and 1980s and first won international recognition for this series. Her photography shows a concern for the ties that bind people together. In portraits that are at the same time bleak and uplifting, sad and humorous, dark and hopeful, she shows us pilgrims living with determination in the face of change and adversity. This is work that ‘captures the deep faith that upholds people, their part in the enactment of a common day, a spontaneous renewal of traditions’ and ‘the fragile immortality of the moment.’
At the Serpentine Sackler Gallery in ‘A Time for New Dreams,’ Grace Wales Bonner has created a survey of the use of improvisatory ceremonies, rituals and shrines in black cultural and aesthetic practices. As a survey of spirituality outside of organised religion, ‘A Time for New Dreams’ has resonances with ‘As Above, So Below: Portals, Visions, Spirits & Mystics’ at the Irish Museum of Modern Art or ‘Traces du Sacré’ at the Centre Pompidou.

Themes of mysticism and magic permeate the spiritual structures Wales Bonner has gathered together to form material portals into multiple frames of experience. As Claude Adjil and Joseph Constable note, ‘Music, magic and myth are assembled and disassembled throughout the exhibition, drawing upon a vast array of reference points in order to consider how spirituality can exist outside of definable faiths and how ritual manifests through artistic praxis.’

Inspired by Ben Okri’s volume of essays, A Time for New Dreams, Wales Bonner has created a space where new dreams and potentially new worlds can emerge. As Okri states in his Invocations for the Shrine:

‘We’re shaping a new reality today
The way you shape a new shrine
With the offering of your spirit
And the magical works of your hand.’ -Ben Okri

I ended the day with two exhibitions focused on individual artists. In George Shaw: A Corner of a Foreign Field Mark Hallett notes that Shaw’s ‘paintings and drawings, even as they dwell on the experience of a boy in Tile Hill, also gesture to a bewildering array of topics and materials – from First World War poetry to the politics of Brexit; from the imagery of The Who’s Quadrophrenia to the iconography of Catholicism; from Joyce’s Portrait of the Artist as a Young Man to the lyrics of Joy Division and The Jam.’ As a result, I was interested to see whether the iconography of Catholicism would feature in Secondhand Daylight: A Display by George Shaw at the Paul Mellon Centre.

The fact there is no reference to Catholicism among this gathering together of some cultural materials that shaped Shaw’s adolescence is, in a sense, a backhanded acknowledgement of the extent his mind is supersaturated in the art of a faith that it was not cool to acknowledge in adolescence and in which, like Stephen Dedalus, he does not believe. Shaw, like Wales Bonner, is interested in spirituality ‘outside of religious structures, be they Christianity or Judaism or Islam, the something profound that happens in a person where they perceive something bigger than themselves happening in the world.’ For many that would be a description of art, ‘something that unites people genuinely in a spirit of harmony or love.’ 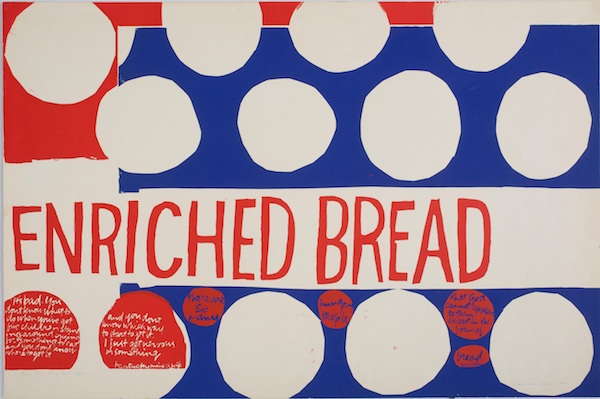 By contrast, ‘Corita Kent: Power Up’ at House of Illustration is an exhibition of innovative and socially engaged work from within the heart of organised religion, as Sister Corita came to prominence as a nun at the Immaculate Heart College in Los Angeles. This is the UK’S biggest ever show of work by God’s own pop artist. Inspired by the billboards along the highways of LA, which she viewed as being like ‘contemporary translations of the Psalms,’ she juxtaposed religious texts with advertising slogans to bring the everyday to bear on the sublime. Her joyful, subversive and – to some – controversial screen prints revolutionised typographic design while offering a bold new perspective on misogyny, racism and war. This layered documentary material from Life, Newsweek and Time with song lyrics, poetry and quotes set against psychedelic Day-Glo colours.

These exhibitions offer a breadth of curatorial approaches to the exploration of interactions between art and spirituality: retrospectives that engage with the religious questions and spiritual issues raised by the artists themselves; historical surveys that recognise the part that faith played within the diverse range of work created in a specific period or by a certain group; empathetic documentary reportage of faith communities; exploration of worldview themes in the work of linked artists; and installations that create space for immersion, improvisation and contemplation. The combination of all these on one day of exhibition viewing represents the major shift in contemporary sensibilities that Dillenberger anticipated.

The potential that this shift in sensibilities holds has been recognised by Jesse Darling in her correspondence with Tina Beardsley. She writes firstly that we can, as a result, whether in churches or museums, acknowledges our ambivalence: ‘to be in the presence of what can properly be called beauty … but uncomfortable in the knowledge of what has been wrought in its name; what is depicted versus what is erased; which stories are told or not told.’ Secondly, we can recognise ‘that the whole of Western secular culture has been imagined in the model of the Christian church, propelled in search of/in memory of/in spite of God—rumoured dead, but no wake or funeral.’ Thirdly, that spirituality offers a way ‘to redeem art objects (embedded as they are in a fairly monstrous system of capital, coloniality and the violence that accompanies all luxury)’ which is to think about them as ‘aids to prayer.’