Forty years ago, David Nash was the first artist to make work on-site for Yorkshire Sculpture Park –invited by the founding director Peter Murray, who has only just retired. Nash has worked frequently with YSP since, so it makes sense that his current presence there is dubbed ‘Full Circle’. What’s more, to explore the park is to experience a very full circle of Nash’s work: he has five permanent works spread around the grounds; a display of films, archival photographs and works on paper in the Bothy Gallery, charting the creation of his work for YSP over the years; a retrospective of four decades of drawings in the Weston Gallery, concentrating on trees; and a display of editions in the Upper Space of the visitor centre.

PCK: I thought you’d be bigger!

David Nash: I am 5 feet 8 – but yes, people sometimes expect me to be six feet plus with a beard and an axe through my belt! I have hauled plenty of wood around, though, and got a bad back as a result!

PCK: How has your engagement with trees come about?

David Nash: My early interest was putting colour into space. I liked demolition wood because it carried a history of human engagement, and I found wood a good material to bear the colour. But I didn’t want to just paint it on, I wanted to integrate the colour into the wood itself. That led me to staining the wood and then to using the wood itself in the natural state. By then, I was in Wales, where demolition wood was hard to find. There was a road-widening scheme locally and trees were being cut down, so I started using unseasoned wood. In art college, I was told that wood must be seasoned otherwise, it will crack and warp, but I liked the fact that it did that and decided to work with it. That’s become my general way of working: rather than starting with a fixed idea, so that any change from that is a potential problem, I like to go with what happens, seeing that as a positive.

PCK: So are trees just a material to you?

David Nash: No: as I came to understand their root systems and the workings of photosynthesis, I tuned in to their aliveness. Trees aren’t made of wood, wood is their body. Rudolf Steiner indicated that there’s a soul in Oak collectively; there’s a soul for each species – the individual tree is part of a much wider phenomenon. That’s consistent with the connection between fungi and trees, which is symbiotic: trees can’t absorb nutrients from the soil without the intervention of fungi, and in return, fungi get the sugars from photosynthesis.

PCK: Do you think of trees differently now from forty years ago?

David Nash: As I have grown older, my feeling for wood has grown deeper. I came to Wales when the environmental movement was kicking off, and I could see then that we weren’t operating in symbiosis with nature but raping it. I wanted to work with nature in a way that gives things back. I empathise with the Taoist view that we should seek to collaborate, not dominate. The way farmers grow hedges is a good example: they tend and shape and cut them, and that stimulates growth and creates a great habitat. Trees just take enough to thrive, and they give back more, and we need to learn from that. 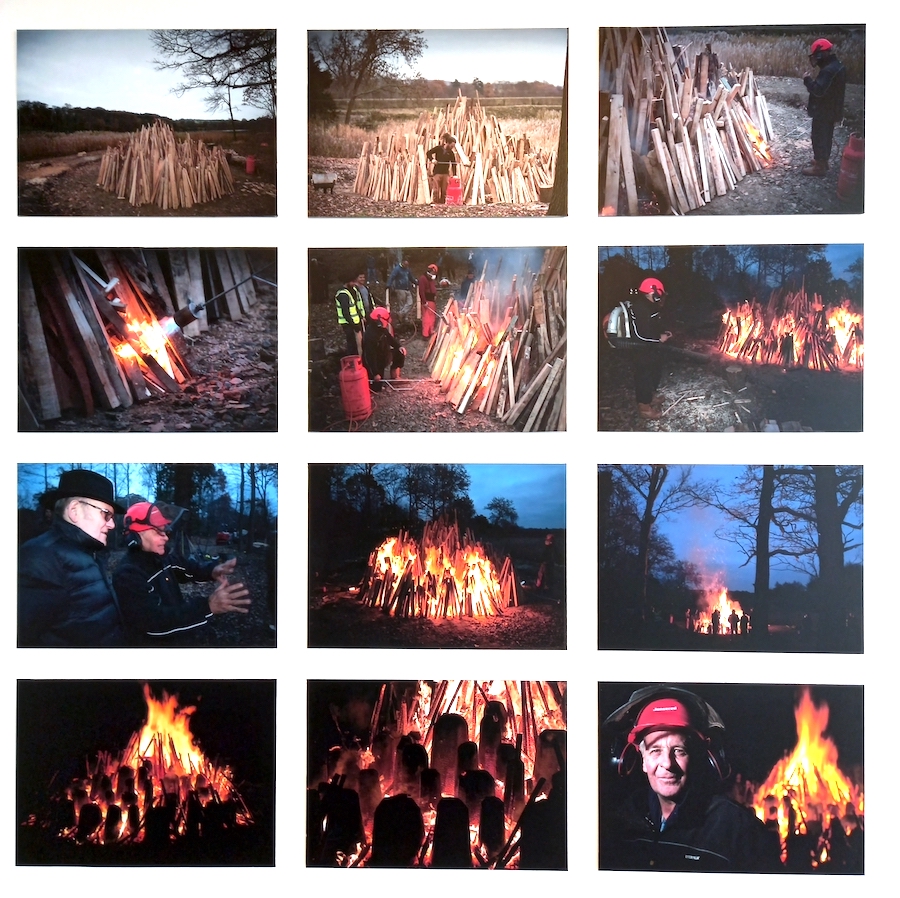 David Nash Installation view of documentary photographs of the making of Black Mound, 2013

PCK: The Bothy Gallery shows the processes behind your permanent works at YSP. The images of the fire to make Black Mound are striking. How controlled was that? 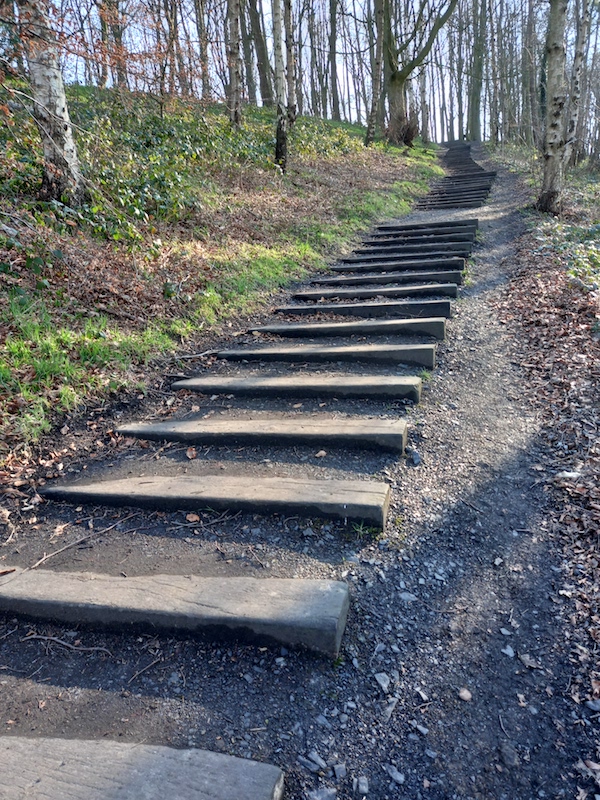 DN: I have been charring wood since 1972. In 1986, I was asked to work in the Forest of Dean. There was lots of charcoal made there in the 19th century, and I saw the sites where the burning had taken place. I made a burned dome form with 900 pieces of larch, but people walked over it, which wasn’t safe. The answer was to fill the gaps with crushed coal. At YSP, I was keen to use coal again, as it is present close under the landscaped grounds and is what the original wealth of the house was built on. This time I used larger stumps spaced so that people could walk through the sculpture, and the Coal Board donated the coal. The process was actually closely controlled, and something of an ‘event’, with lots of people there. We set the stumps out in a big round hole, added kindling, and lit the fire. The kindling wasn’t as dry as I’d hoped, so my assistant and I strapped leaf blowers on our backs for the four hours of burning! Then we put it out with a hose and added the coal the next day.

PCK: Seventy-one Steps also uses wood and coal, but as it takes the form of functional steps down a hillside, I suspect people might not realise it is an artwork?

DN: That’s fine by me. I like low visibility art outside. I don’t like big things dominating the site. The steps were already there, but they were badly spaced and decaying. So I proposed to replace them with charcoal steps and to tamp them into coal. 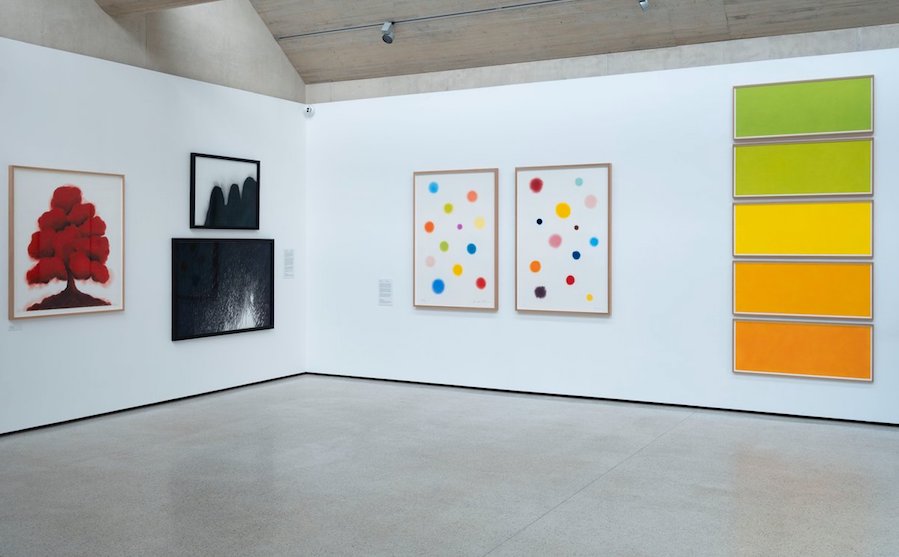 PCK: Some recent drawings appear abstract at first – what has led you to that?

DN: The subject of Oak Leaves Through May is the transition of colour so that any figurative element would be a distraction. I had noticed, walking regularly past some oak trees, that when the leaves first appear, they are small and golden, then they turn a more ochre yellow as they get bigger. Only later do they move towards green as the chlorophyll comes through – first light, then darker. This process happens over two weeks. I apply the colour using pigment rubbed onto pads of fleece, and it took me ages to find the right colours to match what I’d seen. The soft dots came out of a birthday card I made for my wife: she’s a great colourist. I made dots onto the card to record the colours in the garden. 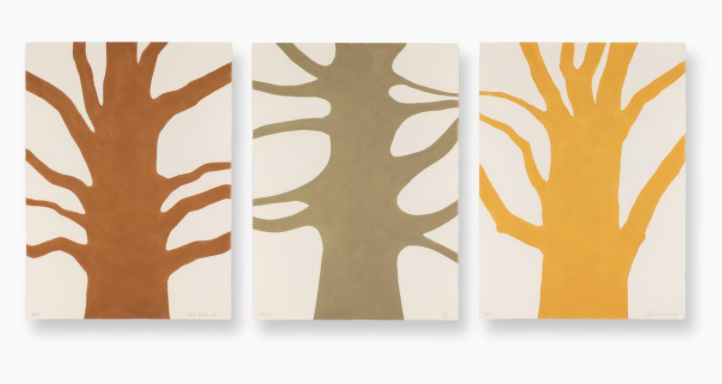 PCK: You also have a gallery of stencil editions. How does Oak, Beech, and Ash characterise the different trees?

DN: The way the branches attach is different in each of those species: ash has the sharpest angles, beech the long smooth curves, and Oak is in between. Here the colours pick up and exaggerate the differences in their natural hues – that’s one thing I like about a drawing rather than a photograph: you can show just what you are interested in, whereas, with a photo, you get everything.

David Nash: Full Circle is at the Yorkshire Sculpture Park until 5 June 2022