It’s been a busy year for Brooklyn based artist Derrick Adams. When I met the charming multimedia artist at Swiss Beatz’ holiday party, the huge letters spelling out Derrick’s name were in celebration of his banner year. 2017 included solo shows at NYC’s Jack Tilton Gallery, at the California African American Art Museum in Los Angeles, in Chicago at Rhona Hoffman Gallery, and an exhibition based on the work of fashion designer Patrick Kelly in Harlem’s Countee Cullen Library. A few days later, I visited the artist in his Bedford Stuyvesant, Brooklyn studio where he was finishing work for his upcoming show “Sanctuary” to open January 25 at NYC’s Museum of Art and Design.

“The show is based on “The Negro Travel Guide”. The book was created in 1936 by an NYC postal worker, Victor Hugo Green, from Harlem. It listed different businesses around the country that welcomed black travellers.” We were in Derrick’s spacious basement studio, surrounded by cut up fabrics and wooden panels. The artist handed me a worn, green covered paperback. “It’s right here. This is the first edition. Mr Green compiled information from other postal workers around the country. The guide kept expanding over the years.It was Mr Green’s intention that this was a temporary thing, which one day it would not be necessary. The Green Book became an important publication. I wanted to focus on the listings themselves, the names. A lot of places are not around anymore. 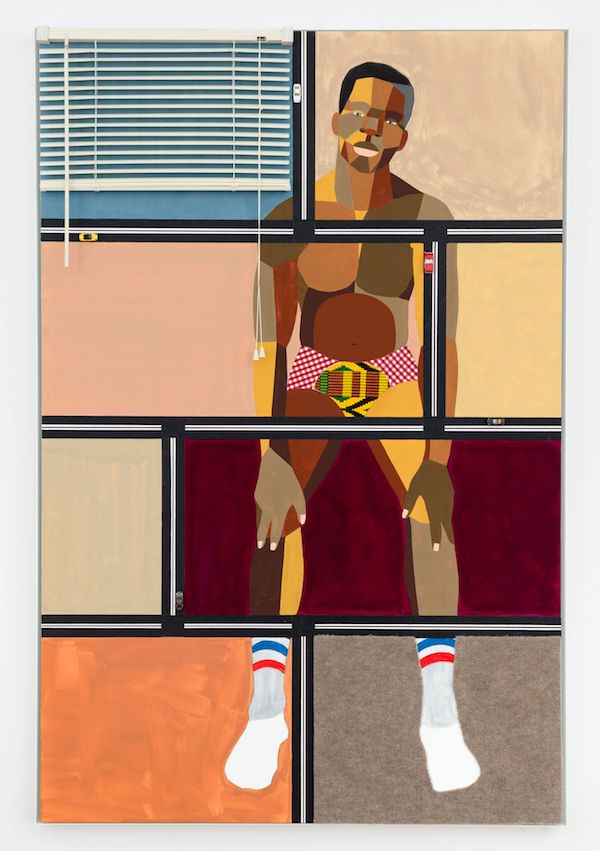 I started doing aerial shots/views of locations. I reimagined the atmosphere these places must have supplied for customers to come. There weren’t that many categories… beauty salons, hotels, restaurants. It was basically where you could eat and where you could sleep. The book became a motivation to make the work, which is a large installation. I created a mini high way going through the museum floor, and then, little sculptures on the high way made from driving hats. The driving hats are pull down hats with a little brim. Men wore them all the time in old movies.”
“I decided to substitute the figure with apparel and used the hat shape. How people presented themselves when they travel. My memory of the 70s is how when people visited my family in Baltimore, they wore driving hats and gloves. Travel was much more formal.”

“Most of the materials I used I buy in the neighbourhood, off the street. For this show, I used commercial upholstery fabric, the kind used in hotels. There will also be collage and paintings on wooden panels.” The site-specific installation includes over 50 works, ranging from mixed media collage, assemblages and sculptures. “The whole show is about moving the audience through the space, so they feel like they are in actual motion. I used the museum space as inspiration for the show. The mini-highway goes though the museum. I decided to break it up and make it about travelling from the North to the South.” 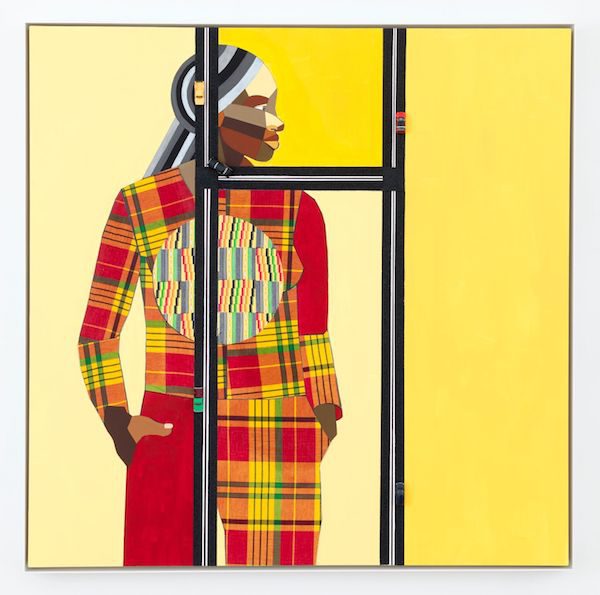 “It’s interesting having a show at a design museum. It makes sense with this work; I’m using works that allude to aerial views of city scapes and re-imaging the places as if they still existed.
I’m hoping this is a show about perseverance and the history of people getting around regardless of social structure.’ His current show at Jack Tilton “, Figures in the Urban Landscape,” continues his use of vibrant colour and complex collaged patterns. The portraits, pulsing with life and grace, furthers his investigation of race, gender and capitalism. Cheekbones are delineated with ochre and mahogany planes. A series of sombre coloured profiles balance the city grid with elegant and contemporary urbanites. The show is a mature artistic triumph.

Derrick also exhibits in London and Paris. In London, he currently shows at Vigo, and his work has been shown at Hales Gallery. He says, “Americans are not as translatable showing outside of America. In London, social structure is more based on class structure. Most artists in England reflect that conversation. As American and black, here in the U.S., my work is more related to levels of identity. The idea of art here is more of a luxury, high-class item. Showing in Paris, they understand the fundamentals of collage. Every country has their translations. I try to show something different in each country. It’s a challenge to show my work outside the country. But people are interested in the way work looks, which is most important. It has to be visually appealing. Conversations are based on the formal structure of the work.” 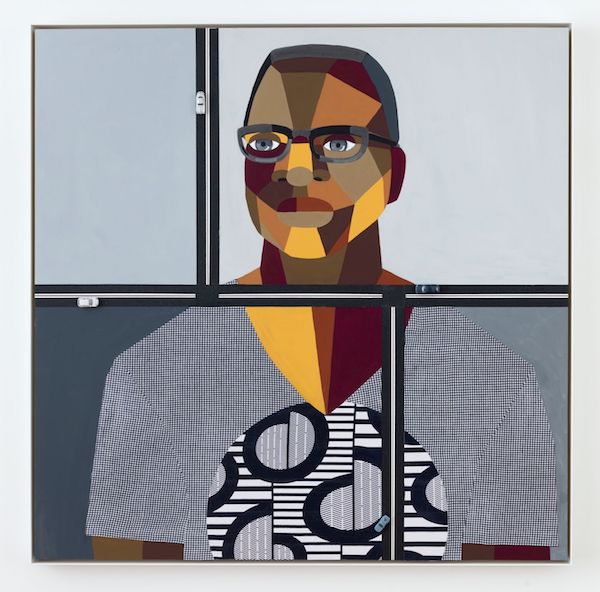 “A lot of my work is about trying to figure out how to reach a non-art audience. How to engage them with a language that’s familiar.” Derrick avidly researches random history about black Americans, including scientists and fashion designers. That’s how he re-discovered American fashion designer Patrick Kelly who worked very successfully in Paris in the 1980s. “I’m inspired by more triumphant executions. I educated myself.” Kelly’s designs are the springboard for the Countee Cullen show, where Derrick created a body of work using Kelly’s actual clothing patterns and fabrics as a subject.
I asked if he knew how to sew, “ I do know how to sew a bit. I’m in no way an expert. I can do some sculptural things with sewing. An intention of mine is not to show perfection, but to show a strong interest in subject matter and how to execute it. I want the audience to see a certain level of vulnerability. I try to do things I’ve never done before.” Derrick’s work is as accessible to a teenager who never goes to museums, as it is to a sophisticated curator. We speak about the need for audiences to expand the art world. “It’s a new era of curatorial practice, one that is much more interested in gaining new audiences. Young audiences want diversity when they go to see art. They want to see other forms of inspiration. It’s important to inspire people to think about the subject matter in different ways.”