I’ve always had a huge respect for the work of Don McCullin, and it was, therefore, a pleasure to see an article by him in the Culture Supplement of last Sunday’s Sunday Times. Headed ‘Pictures That Aim To Disturb You’, with the word DISTURB boldly in red, it gave one six images of the photographer’s own choice from his six-decade career. “I don’t get any freedom from my life’s work,” he said, “I get taught mental illness on a nightly basis.”

Only two of the six images were war pictures, though McCullin is famous for those. One, “my first war picture, my baptism,” was from Limassol in Cyprus. It shows a man rushing out of a cinema, carrying a gun. The other, a real heart-breaker, was made in Biafra during the Nigerian civil war of 1968. It shows a starving albino boy clutching an empty corned beef tin. “These children were dropping dead in front of me. It was a terrible day.” 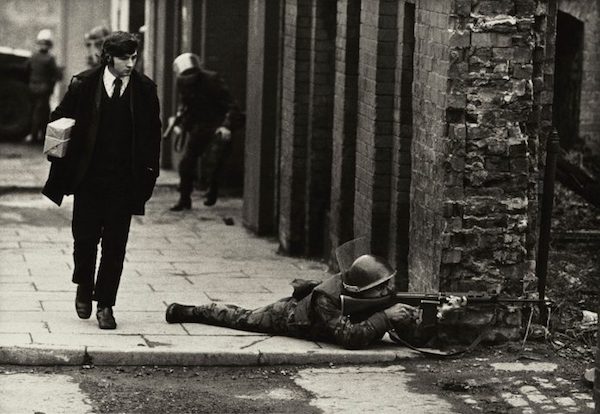 The other four pictures were all made in the UK. ‘The Governors in Their Sunday Suits’ – “the first picture I took as a professional”, made in 1958 and featuring vandalising bad boys who were then his friends. Liverpool in the early 1960s; a rather smug female protestor being carried away from an Aldfermaston ‘Ban the Bomb’ march – also in the early ’60s; and finally a winter landscape from the Somerset Levels, close to Glastonbury. made c. 1990, close to where McCullin now lives. “I’m coming to the end of my work. I’m getting sick of the darkroom,’ he says.

Yes, technology is outstripping him. Digital pictures are king and don’t need darkrooms. All the same, what a career!

However, there’s one little niggle involved. The ST article is headed ‘Photography’, not ‘Visual Art’. For all his huge celebrity, McCullin has never entirely made it into the ranks of Britain’s leading artists. His images fetch good prices now when he exhibits them in commercial galleries, but not the absolutely sky-high ones accorded to works by the likes of Sir Antony Gormley.

Talking of whom, there was, in fact, the image of a new work by Gormley in the main section of the ST that very day. Entitled ‘Rust in the Lord’, it showed a new iron sculpture entitled ‘Doubt’. The work will occupy a conveniently vacant niche in the facade of Wells Cathedral until 2023, right next to a time-worn gothic sculpture. It consists of a teetering pile of metal blocks, seemingly ready to fall on the head of the admiring spectator. The cathedral authorities seem charmed to have it – mostly, I suspect, because its presence removes any possible doubt that they may not be up to the minute.

Can I be alone in thinking that there was something slightly weird about this conjunction of photographer and – yes – artist? It was becoming increasingly clear, even before the pandemic, that visual art was having an increasingly hard struggle to hold its place in the culture sections of the big Sundays; the pandemic hit art hard. Attendance at the big museums dwindled sharply, what with Covid restrictions and the collapse of international tourism. Book your visit in advance. Wear a mask; follow the prescribed route through the building. Be careful not to get too close to other visitors. There was still plenty of other stuff for the papers to cover. Books to review, Articles to write about what is currently on the telly.

Some institutions made big efforts to give the public something arty to look at when they are safely outside, in the open air. The NG now offers reproductions of selected masterpieces on screens outside the building. Just get yourself to Trafalgar Square. Don’t bother to enter the gallery itself.

Don McCullin doesn’t belong to some currently much-promoted categories. He isn’t a woman; he isn’t non-Caucasian. The images employ no radical new technology. His work, however, is directly accessible to the non-instructed spectator. You don’t have to be told what it’s about. Looking is enough. In these challenging times, this feels like a significant all-sufficient virtue. Disturbance, in this case, is better than doubt.