Surrounded by a screen of biomaterial, I’m one of eight bodies seated in a meditative circle. Projected visions, sonic vibrations and ancestral ghosts accompany us on a journey deep beneath the peatlands. As we burrow through layers of soil, rock, time and consciousness, multispecies and decomposers, transformations of death into dust into a new life, I think about how all matter was once the matter of something else in this unceasing shapeshifting that we call reality.

The Chilean Pavilion’s Turba Tol Hol-Hol Tol, curated by Camila Marambio, was one of the most affecting 15 minutes of my biennale experience. It aims to promote global awareness of peatlands and their critical role in the planet’s carbon cycle. ‘Hol-Hol Tol’ means ‘heart of the peatlands’ in the language of the Selk’nam people, who are among the original inhabitants of Tierra del Fuego in Patagonia. The Selk’nam lived in the peat bogs there for 8,000 years before colonisation and the struggle with the genocide that ensued. The installation represents the peatlands as a living body – itself vulnerable to mining, extraction, and drainage for construction – while immersing us in the material and immaterial perspectives of the peatlands’ as ancestors that hold cultural and climate knowledge dating back several millennia. 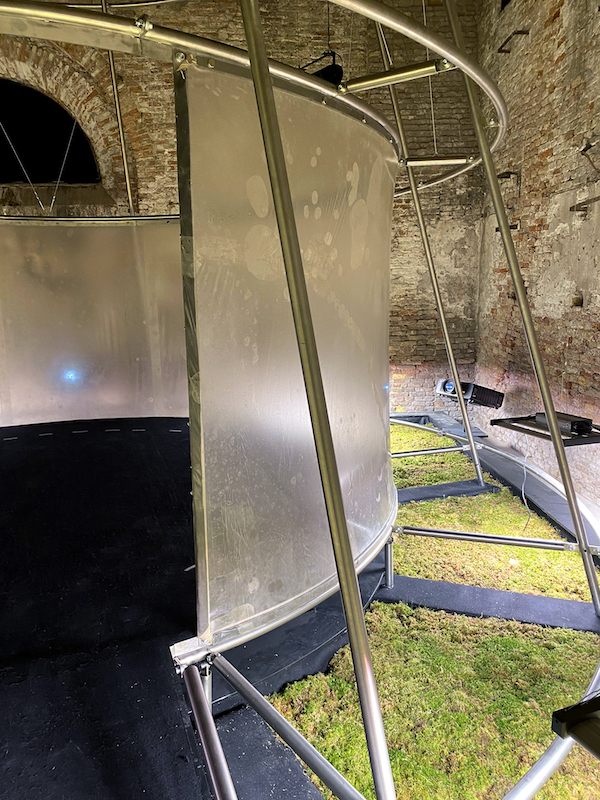 It’s a tactile, sensory interlude to the bustle of the Arsenale, and as we leave, we are invited to touch the sphagnum – the soft dewy mosses of the bog. As the guide poured droplets of the moss’s scent onto our skin, I felt genuinely connected and invigorated. However, opinions were divided – some disliked the ‘soggy stinking hand’ experience and the ‘forced meditation’. Is it possible to force meditation? I thought while I contemplated the effects of ecological grief and what that may do to our minds and our collective psyche.

The central theme of the main exhibition is The Milk of Dreams, and the moss is just one of the biennale’s many offerings of soil, earth and scent experiences that aim to bring us back into our physical bodies after the disembodying digital realms of the pandemic. Precious Okoyomon’s To See the Earth Before the End of the World presents a sculptural topography of living, growing, and decaying matter in work that deals with nature as inseparable from the historical marks of colonisation and enslavement. Delcy Morelos’ Earthly Paradise, drawn from Amazonian Amerindian cosmologies, engulfs the spectator in a mass of soil that emits an aromatic blend of cacao, spices and cassava flour. Igniting the olfactory senses, we revisit that which was (and still is to many more-than-humans) one of the most important ways of interacting with the environment.

In the Giardini, my senses were filled with the scent of hope and fear in the work of Máret Ánne Sara, as the Nordic Pavilion transformed into ‘The Sámi Pavilion’, celebrating the art and sovereignty of the indigenous Sámi people whose nation extends across the political borders of Norway, Sweden, Finland and Russia. At a critical time that addresses Nordic colonialism as the Arctic is experiencing unprecedented consequences of the climate crisis, the Sámi are making restitution claims for their art and artefacts, defending their worldview of the interdependence of lands, waters and people.

Alongside moving works from Sámi land guardian Pauliina Feodoroff and Anders Sunna, whose presentations implore us to pay attention to ancestral knowledge and a worldview of ‘What happens to the land, happens to the people, Máret Ánne Sara is interrogating Norwegian colonial law and the struggles of reindeer herders. Her work Du-ššan-ahttanu-ššan consists of two suspended, cloud-like forms of reindeer sinews imbued with smell and explores the sense as an elementary part of the non-verbal communication that happens between lifeforms and their surroundings. Working with a perfumer in producing the smell of ‘hope’ and of ‘fear’ Máret says that the smell in ‘one of the forms conjures the ongoing stress and fear experienced by humans and reindeers during colonising processes; and in the other, the hope needed to resist and generate a new future’.

Levitating mid-air is Gutted – Gávlogálši, a constellation of dried reindeer stomachs that reference the gut feeling that ‘we know by instinct’ and which is highly valued by Sámi philosophy. The stomachs appear delicate but tough, each body with fine detail and materiality distinct to the individual reindeer. But these forms of knowledge and kinship are a poetic reminder that skin and bone are no match against the industrial machine.

In dealing with bodies, metamorphosis, interconnectedness, and alternative histories, The Milk of Dreams is a reorganising of hierarchies and a response to the pandemic with its overarching theme of material transformation. With 90% of artists identifying as female and over 180 (of 213) having never been included in the main show before, it marks a precedent. Inevitably, there have been objections, but in response to suggestions this is the ‘Women’s Biennale’, curator Cecilia Alemani smiles and says, “No one ever dreamed of calling 127 years of exhibitions that were 90% male, ‘the Men’s Biennales’. Apparently, only men have the luxury of being considered a universal category.”

As the main exhibition challenges the male figure as the centre of the universe, it extends beyond the human to the more-than-human in our placement as the centre of everything. It’s an urgent and uplifting reminder of the role that art can play in tackling social, cultural and environmental challenges. It’s a shaking up of old paradigms into new modes of behaviour. It’s an acknowledgement of the erasing of thousands of years of accumulated knowledge, not only from a loss of diverse cultures in the forming of an industrial monoculture but through the distorting of histories.

In response to Cecilia Alemani’s invitation to dream and imagine alternate realities, the Pavilion of Uzbekistan presents Dixit Algorizmi – The Garden of Knowledge, which questions the narratives surrounding modern technologies and the forgotten roots and resonances with distant places, times, and cultures—reiterating how science and culture are a collective effort and how global civilisation results from entangled multifaceted histories, it challenges us to reconsider our Western-centric assumptions. Reflecting on the legacy of Muhammad ibn Musa al-Khwārizmī, who was responsible for the introduction of Hindu-Arabic numerals to Europe (whose Latinised name became the basis for the word ‘algorithm’), the pavilion draws from gardens of Islamic tradition, offering a space for learning and exchange, contemplation through sensory experience.

Curated and designed by Space Caviar and Sheida Ghomashchi, the reflective steel floor gives the illusion of a body of water. At the same time, a smell of sea lavender lingers in the air, creating a calm, dreamlike space to imagine alternative modernities. This is a place to discover and debate what else is possible, with amphitheatre style indentations in the staging creating seating that takes the form of ripples in water. There are physical spaces for gathering, learning and exchanging ideas as the pavilion is activated by events that invite heterogeneous voices to coalesce and question the greater order of things.

As Hans Ulrich Obrist said to us at my first Brutally Early Club in Venice, we need to move beyond the short-term thinking that’s the root of contemporary crises. Think more toward the longer duration—the future as ancestral. After centuries of human expansion, colonisation and extraction, and the aftermath of a global pandemic, the 59th Venice Biennale hopes to map out more than one path leading to the future. Bringing us back into the body through our senses, shaking up defunct systems and the progressively dysfunctional relationships we now have towards each other and to the earth, and seeking ways to repair ancient bonds may go some way to helping us regain a lost part of ourselves.

Read More About the Biennale