A new era pre-supposes the old. Edinburgh Printmakers new £12m home at Castle Mills, Edinburgh is spectacular! A fantastic purpose-designed re-imagining of a huge listed building now full of 17 presses for etching, lithography, silkscreen – and much more. It has state of the art everything, including artists studios, 2 exhibition spaces, shop, cafe, meeting rooms, a garden. You name it, they have it.

City-owned, but on a peppercorn rent and with a 125-year lease, this listed building is programmed to help regeneration of the Fountainbridge area. Yet this world-class creative hub would not exist but for the enterprise of many who toiled before. 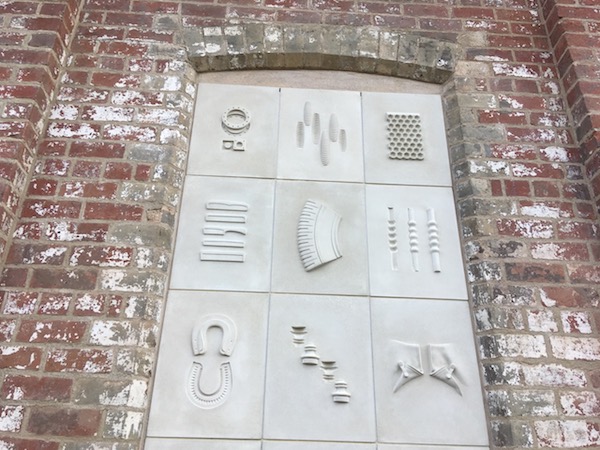 In the late 1960, I climbed some very precarious twisty stairs in Edinburgh’s Victoria Street to get to the original workshop set up by Robert Cox in 1967. Ken Duffy who was director for 19 years from 1968-1987 remembers, “I had just left Edinburgh Art School when I took the job, £5 a week and a flat above the shop. I thought I was rich.” Philip Reeves was on that committee, and later helped set up Glasgow Print Studio. “He never took a penny expenses. Well – there were no expenses. I remember we had Arts Council money: £500 a year!”

Duffy & EP moved to the Fruitmarket in 1975. The Union Street workshop followed. In 1983 I had organised a landmark New York show, “New Scottish Prints” as part of the huge Britain Salutes New York festival, my curatorial debut. So innocent was I, that I took a late-appearing print by Elizabeth Blackadder, on the plane under my arm! Duffy is “very impressed with the scale of the Castle Mills project. I take my hat off to them. It’s very ambitious. Exciting,”

Robert Adam shares his view. He succeeded Duffy for 11 years introducing the ‘safe’ printmaking methods now used by all. “The workshop has a similar spatial feel to Union Street. I like that. It’s a great new adventure and a wonderful building has been saved. As long as the tail doesn’t wag the dog.”

Three highly successful permanent commissions celebrate the event. All are rooted in the heritage aspect of the actual building, once home to the famous North British Rubber Company, established in 1856. At one point it employed 8000 folks, making Wellington boots for soldiers in WW1, hot water bottles, car tyres, golf balls etc. These items are now immortalized by Mark Doyle in beautiful white concrete wall panels on the outer walls.

Rachel Duckhouse’s metal gates across the front of the building are a triumph. She took her inspiration from the rollers used to flatten the raw rubber into sheets. Of course, rollers are essential to any form of printmaking, so the link was obvious, but her hand-drawn repeat patterns are perfect.
Calum Colvin’s approach is more complicated: part periscope, part kaleidoscope, clad in etched metal & black rubber with a wheel to turn. Lens & mirror have long featured in his work, here used to magic effect. 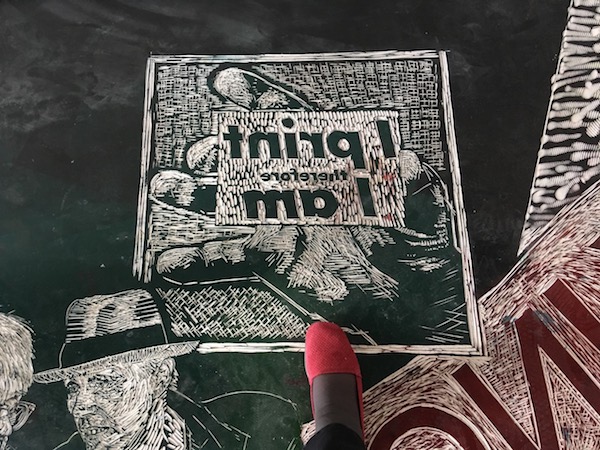 The one temporary commission involves German artist Thomas Kilpper. These political-social narrative “large-scale, site-specific immersive” (how I hate that word) installations tick all the boxes. Today’s ‘celebrities’ cavort across black rubber carved into it by Kilpper and 4 young talented assistants working from photos projected down onto the floor. Thus Trump & Kate Moss, Johnny Rotten & Warhol, Cameron, Gorbachev, Sean Connery & Annie Lennox, even horrid Farage, who carries a rat on his shoulder, are immortalised. Most of these characters leave me cold. Soon one is wondering – Why so few artists and only 2 printmakers? Why him and not her? Why no Nicola? Banners interweave through the figures, an excellent pictorial device wasted on some banal faked words from Trump.

The technical expertise here is to be admired, with colourful prints taken off the floor via a large barrel roller and hung on the walls & ceiling to significant effect. The actual carving is remarkable, as rubber is much harder to work than lino. The portraits are less convincing, some ugly or unexpected, many unrecognizable. A few, like that of Alfons Bytautas, are welcome. Bytautas was master printer at EP for 30 years. But it’s outrageous not more key EP figures are acknowledged in this new Castle Mills building. 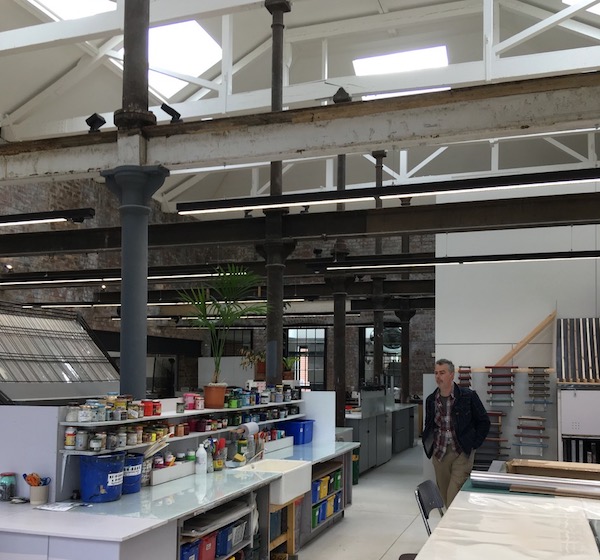 The second exhibition, in a glass space above the shop, is home to a show of 20 prints 2005-2018 by EP patron, Callum Innes. Half are the work of master printer, studio director Alastair Clark, half Bytautas. I say ‘work of’ intentionally because these minimalist abstractions in grey and black, subtle manipulations of light and shade, multiple variations in tone, inking, (some stone lithographs, others intaglio photopolymer plates) are all the fruit of total, intense collaboration.

In the past work produced at EP in its various homes was made by artist-printmakers who draw, etch, cut, make, create, proof, ink and then print their own etchings, woodcuts, lithos or photo plates working long hours mixing inks, turning handles, involved with messy processes.

So far no sign of this aspect – but soon I suspect EP will be awash with creativity. The architects Page\Park led by Suzy O’Leary have created wonderful spaces full of light and space, the all-important print workshop situated on the top floor under vast high skylights. The garden/cafe will attract folk to hang out. As Adam said, “The building could hopefully become a beacon, a real destination.” With 16 staff and 17 presses, including one gifted from Willy Rodger’s widow, EP is all set for success.