Elmgreen & Dragset have transformed the ground floor exhibition space at The Whitechapel Gallery into a disused municipal swimming pool complete with cracked tiles, fallen fluorescent lights, peeling plaster and scaffolding posts for their survey show which opens on 27 September.

At first glance, it is reminiscent of Goldsmith’s Laurie Grove baths in New Cross which in recent years have been used for student art degree shows. The attention to detail is astounding. The artist duo has created a fictional narrative for this site-specific installation relating to the gentrification of London’s East End and charting the swimming pool’s rise and fall, from its philanthropic founding in 1901 to its rise as a famed public amenity and its politically sanctioned and commercially driven decline. The Whitechapel Pool is reputedly the site where artist David Hockney made his first drawings of a swimming pool’s water surface. The artists’ narrative tells how the pool lost its funding during Thatcherism, was squatted, abandoned, and in 2016 sold to a developer during Boris Johnson’s last year as Mayor of London. Next, the pool will be renovated to become the main feature of a luxury hotel spa. 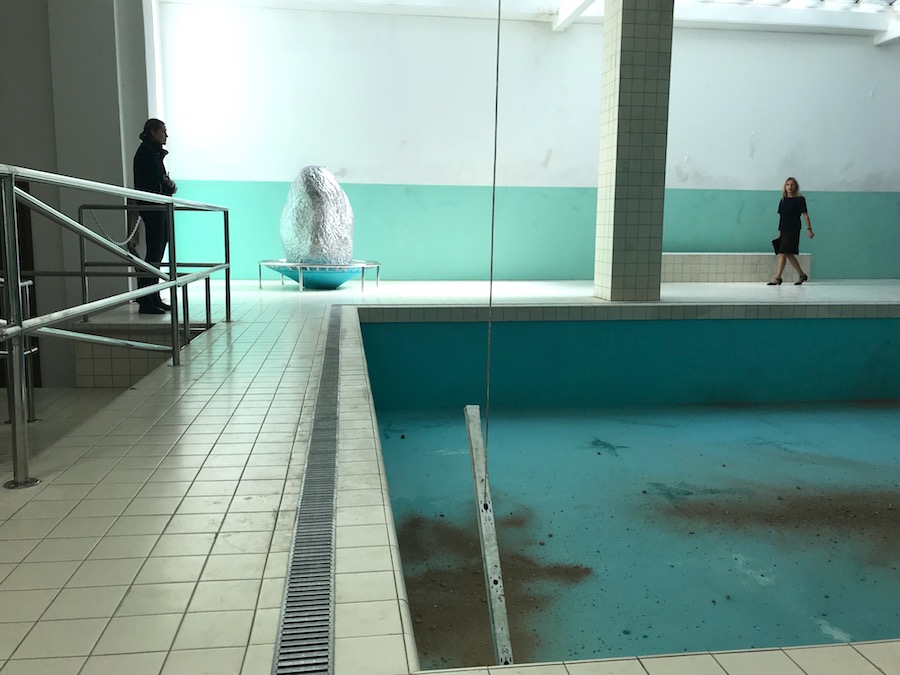 The work points to a loss of faith in public space in an era of austerity. Elmgreen & Dragset said: “East London saw intense gentrification in the last ten years. Bars where artists used to meet closed, artists’ studios were turned into luxury loft apartments. At the same time, poorer boroughs experienced the effect of austerity politics. Our derelict swimming pool relates to this metamorphosis of local communities. It is also a sentimental image of painful transitions in general – the shift of values – and how it can be difficult as a human being and as a citizen to adjust to such challenges.”

The exhibition is curated by Laura Smith, Curator at the Whitechapel Gallery with Habda Rashid, Assistant Curator at the Whitechapel Gallery.  In the environment of The Whitechapel Pool, gallery assistants become security guards patrolling the space in padded jackets with jangling keys. The artists also present additional works within The Whitechapel Pool. On one edge of the pool lies Some stayed on while others left (2018) a fallen statue of a headless male body evoking a classical sculpture and a time with different ideals. Nearby is Gay Marriage (2010), a work that consists of two urinals with their plumbing tangled and connected and Too Heavy (2017), a huge aluminium rock weighing down a trampoline. The swimming pool has been a recurrent theme in Elmgreen & Dragset’s work, from Death of a Collector (2009), where a fictional art collector was shown floating face down in a private pool, to Van Gogh’s Ear (2016), a swimming pool displayed vertically and placed in central New York. The Whitechapel Pool is Elmgreen & Dragset’s first work about a pool that is public and municipal in scale. 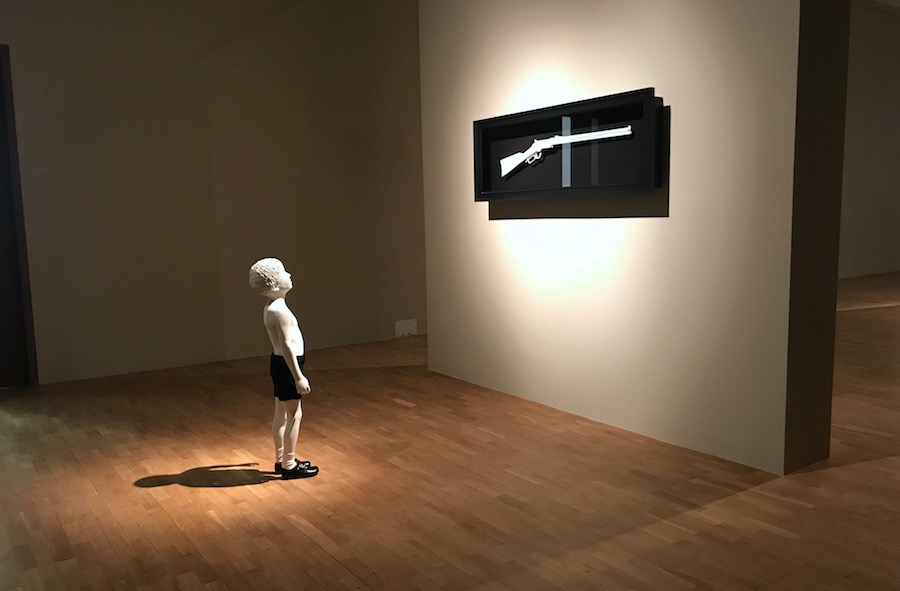 Another gallery is dedicated to Self Portraits – monumental labels carved in marble or painted on canvas – that pay tribute to works of art that have inspired the artists and shaped their identity. Their tributes to artists ranging from Louise Bourgeois (1911-2010) to Mark Morrisroe (1959-1989) are accompanied by a desk complete with a diary and a bottle of whiskey. The Bottle and the Book (2015) invites visitors to break common gallery rules by sitting on the artwork and taking a drink. The duo also reference the Canadian art collective General Idea.

The exhibition culminates with a display of figurative sculptures presented in a chapel-like atmosphere.  Some sculptures question traditional ideas of masculinity: in One Day (2015) a young boy gazes at a rifle in a display case, in another a boy hides inside a mantelpiece. The artists draw inspiration from the 19th century Danish painter Villhelm Hammershoi (1864-1916) who subtly turned his depictions of domestic spaces into psychological dramas of bourgeois repression. 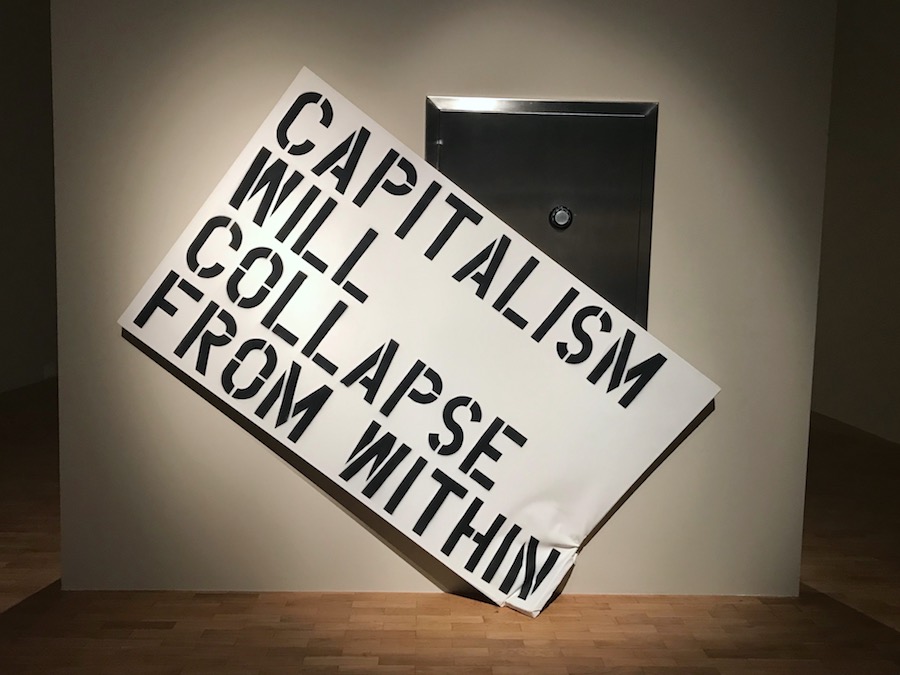 Capitalism will collapse from within 2003

In 2005 the artists installed the sculpture Prada Marfa, a replica Prada store, in the Texan desert. In 2009 they received a special mention for their exhibition “The Collectors” in the Nordic and Danish Pavilions at the 53rd Venice Biennale. The artists were shortlisted for the Hugo Boss Prize, Guggenheim Museum, New York (2000) and won the Preis der Nationalgalerie, Hamburger Bahnhof, Berlin (2002). In 2012 they were selected for London’s Fourth Plinth Commission in Trafalgar Square, and in summer 2016 Public Art Fund presented their sculpture “Van Gogh’s Ear” at Rockefeller Center in New York City. Elmgreen & Dragset curated the 15th Istanbul Biennial in 2017.