The unassuming Hunterian Gallery in Glasgow, perched next to the University library, houses stunning paintings by the Glasgow Boys (and Girls) and the Scottish Colourists, and very occasionally plays host to international exhibitions that would cause any art connoisseur’s eyes to bulge. The current exhibition Expressionist prints from the German-speaking world includes many of the best-known names of European Expressionism from the 20th century. 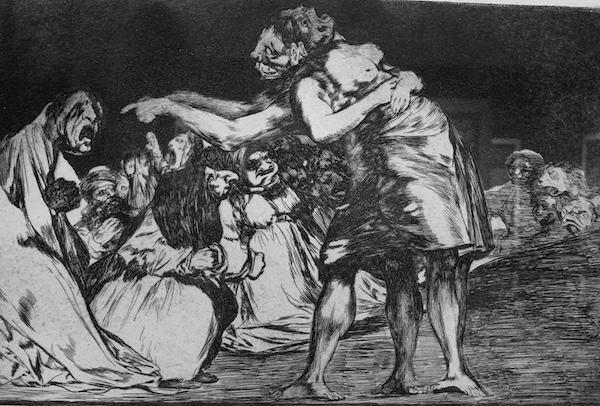 Many major art movements have been born from turmoil or conflict, and Expressionism is the archetype. Although the movement is often said to have started in Germany around 1905 (the year of the formation in Dresden of Die Brucke group), there are earlier examples which might also be called Expressionist in that it concentrates on the depiction of images expressing deep emotion. This exhibition uses that looser definition, including work by Francisco Goya (1746 – 1828), Martin Schongauer (circa 1450 – 1491), and Albrecht Durer (1471 -1528.) I’m not sure I would have used this broad definition myself if I had curated the exhibition – it detracts from the turbulent history of the 20th century.

Increasing industrialisation at the end of the 19th century predisposed to alienation, and after WW1, defeated and debt-ridden Germany simmered with discontent. The Communist Spartacists uprisings, brutally crushed by the Freikorps, added to tensions. The Weimar Republic that followed was characterised by hyperinflation, exacerbated by The Wall Street Crash in the US. With the dive in the economy, poverty and unemployment soared. Deprivation and disgruntlement helped usher in the Nazis, bearers of a false dawn.

That period, characterised by desperation amidst workers and the rising threat of Nazism, together with the WW2 years, inspired some of the best European art of all time. Artists expressed the suffering of ordinary people through raw, searing images bursting with emotion. 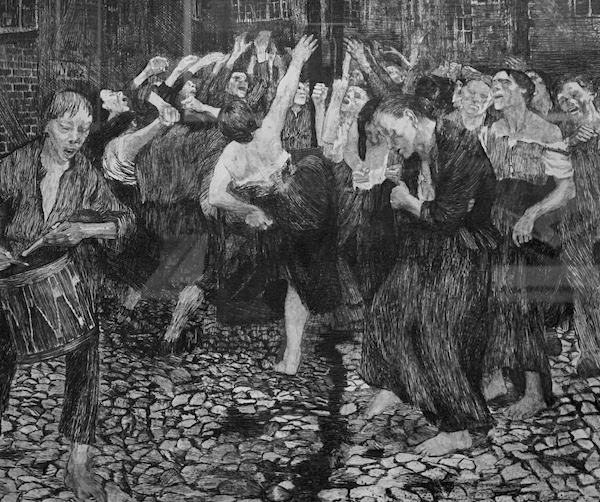 Kathe Kollwitz specialised in depicting the lives of the poverty-stricken. There is something deeply unsettling about her 1901 etching of prisoners’ wives shouting and dancing around a guillotine outside the prison where their husbands are incarcerated.

The way suffering may inure to the distress of others is illustrated by a nightmarish print by Goya where a baying crowd of grotesques watch a marital fight. 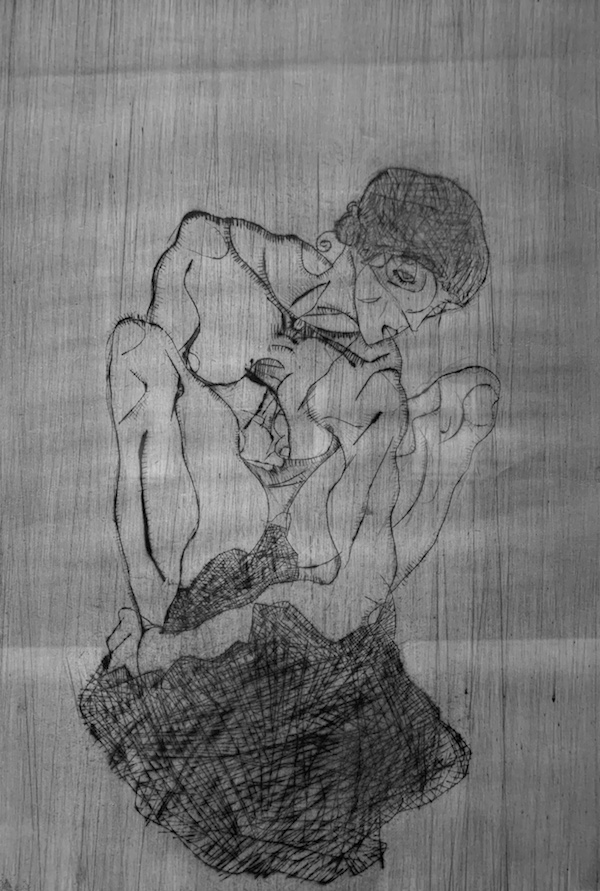 Picasso’s 1904 etching ‘Le Repas Frugal’ shows a couple clearly on the brink of starvation. They sit at a table and look out at the world with despondence, the only sustenance on the table being a bottle of wine. The food bowl is empty. This widely published print impacted many of the German-speaking Expressionists.

George Grosz, Otto Dix, Ernst Kirchner, and Max Beckmann were among the most caustic artistic, social commentators in Germany in the 20C. Grosz and Dix contrasted the complacent contentment of wealthy businessmen and army officers with the grim fate of ordinary people and wounded ex-soldiers, driven to destitution, prostitution, and begging. Grosz’s Fit for Garrison Duty illustrates the mechanical life in the Army, where there was no room for emotion (figure 5). It is not perhaps the best example of Grosz’s work to have chosen: some of his excoriating prints were on show at Tate Modern’s Magic Realism: Art in Weimar Germany exhibition last year, and showed the carnage of war and the social and financial chasm between the haves and have-nots. 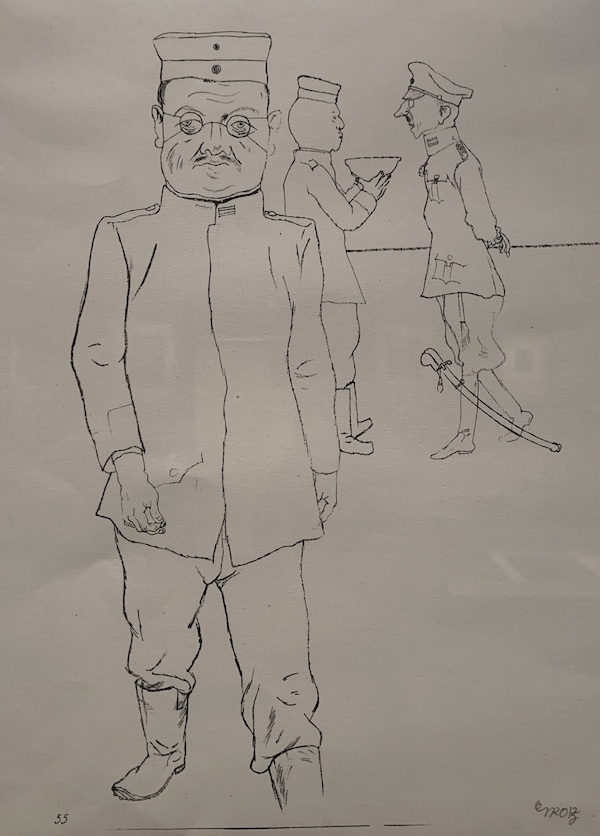 Dix served as a gunner at The Somme and on the Eastern Front. He produced a series of prints revealing the horrors of war. Here, there is a drypoint of the circus, a world that intrigued him, offering as it did an alternative to bourgeois or deprived urban life. Yet there is something malign about the faces of the couple: Grosz and Dix’s work often leave the viewer unsettled. (Figure 6). 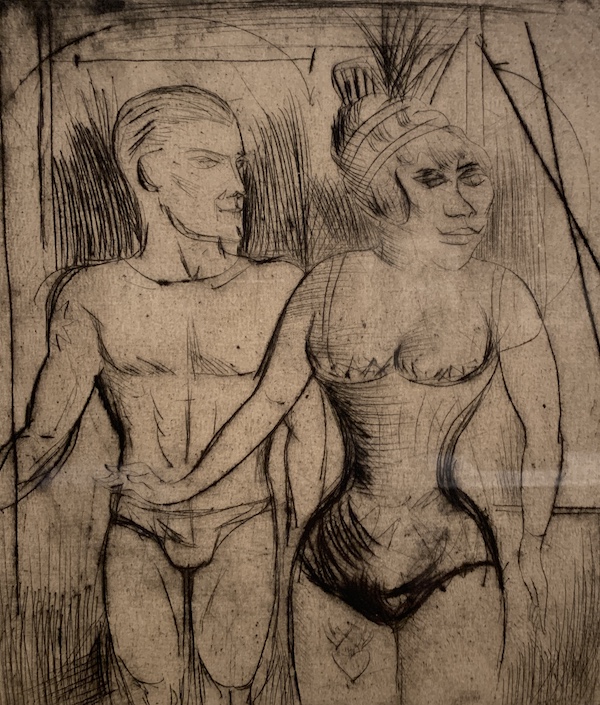 Of course, external suffering is not the only kind. The mind can torment, and Expressionism provided an ideal medium to convey despair. A haunting woodcut print by Edvard Munch entitled In The Man’s Brain depicts romantic obsession. The man’s face is represented as a primitive African mask, an influence on many Expressionists after visiting the Ethnological Museum in Berlin. Above floats the beguiling nymph of the man’s dreams. Swathes of her hair entwine her would-be lover’s head. (Figure 7) It would be at home in the Seeds of Love section of Munch’s Frieze of Life. Munch was rarely able to disentangle love from anxiety and feelings of worthlessness, perhaps partly as a result of the loss of both his mother and his sister as a child. – Edvard Munch – ‘In Man’s Brain’ See Top Photo

But joy is represented too here. Gabriele Munter’s exhibition poster seems to illustrate Rainer Maria Rilke’s Lovesong, which likens love to two strings on a violin merging into one harmonious sound.

Two chromolithographs by Oscar Kokoschka show the vivid colours and flattened perspectives of his illustrated book, The Dreaming Youths, without the adult content. 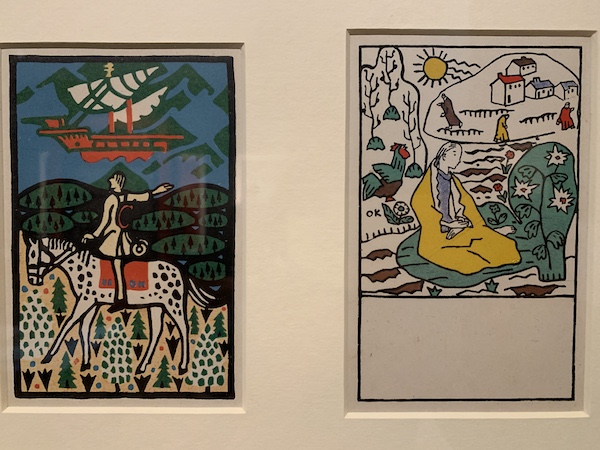 There hasn’t been space to discuss the prints by Beckmann, Kirchner, Schmidtt Rottluff, Rousseau, Daumier, Gaughin, Klinger, Von Stuck, Pechstein, Nolde, Mueller, or others. This world-class exhibition belies its housing in such a modest museum. It would pack out The Tate.