What a FIAC! The Indian summer made the whole Parisian art week such a delight. With just one week to recover after the Frieze frenzy, I clambered onto the Eurostar to attend the 45th edition of FIAC.

I started the week on Sunday with a visit of the Belleville galleries and made a nice discovery at Gallery Emmanuel Hervé which was presenting a group show of Brazilian artists : “Cependant, la peinture” with Rodrigo Andrade, Fabio Miguez, Paulo Monteiro and in particular, the works of Sergio Sister. The Brazilian artist’s works are an interplay between the 2-D surface and three-dimensionality to liberate paintings into space.

I attended the opening at the Jeu de Paume of 2 major exhibitions: Dorothea Lange and Ana Mendieta – not to be missed if you are visiting Paris in the coming weeks. Monday was the opening of Tomas Saraceno’s exhibition at the Palais de Tokyo : one of the most extraordinary exhibitions I have ever seen and experienced. More than an exhibition, it is an exhaustive philosophical, political, scientific and artistic proposal that the Argentinian artist shares with the visitor.

Tuesday was the opening of the Tuileries sculpture park: “FIAC hors les murs” with the giant Calder (Janey Waney, 1969, acier peint, 772 x 762 cm) presented by the Christophe Van de Weighe gallery. The work will remain in Paris for a year.

At the vernissage of Asia Now (one of the satellite fairs), I discovered the lyrical abstract painting of Japanese artist, Yuki Masaida, at Fabien Fryns, and the delicate and poetic watercolours of Wang Haiyang at the Paris Beijing Gallery. 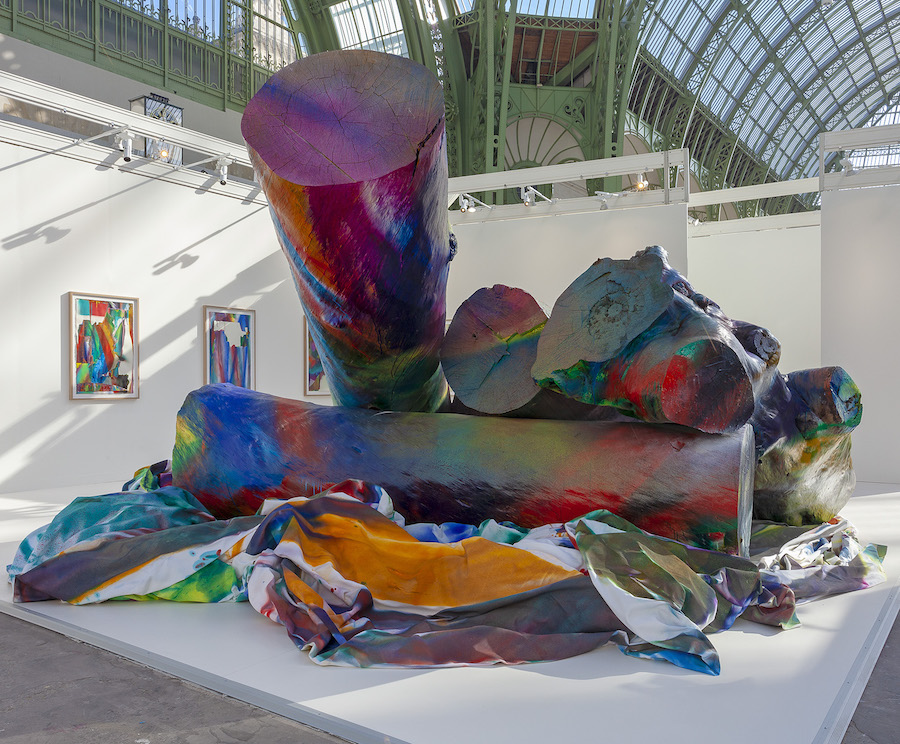 FIAC opened on Wednesday morning and was very well attended with many European collectors as well Americans and Asians who are increasingly choosing to visit FIAC over Frieze. With 195 galleries, the French fair is smaller than its British and Swiss counterparts, but the magic of the Grand Palais remains one of its main assets, as well as its blend of modern, post-modern and contemporary art. FIAC 2018 was very strong with quality works, nice discoveries in the young galleries section on the first floor, and several very daring and inspiring booths from some galleries.

Gagosian Gallery presented a stunning piece, “Ingres’ Wood” by Katharina Grosse whom I interviewed. The natural light and monumentality of the Grand Palais offered the artist an unprecedented opportunity to exhibit a piece she initiated when working at Villa Medicis in Rome with Tatiana Trouvé.

Gallery Gmurzynska, back for the first time since 2011, had one of the most spectacular booths at the fair which was designed by the French fashion designer, Alexandre de Betak – “On Fire”. Modern and postwar gallery works relating to fire by Roberto Matta, Otto Piene. Joan Miró, Yves Klein, and Alberto Burri were presented in a futuristic firehouse. See top Photo 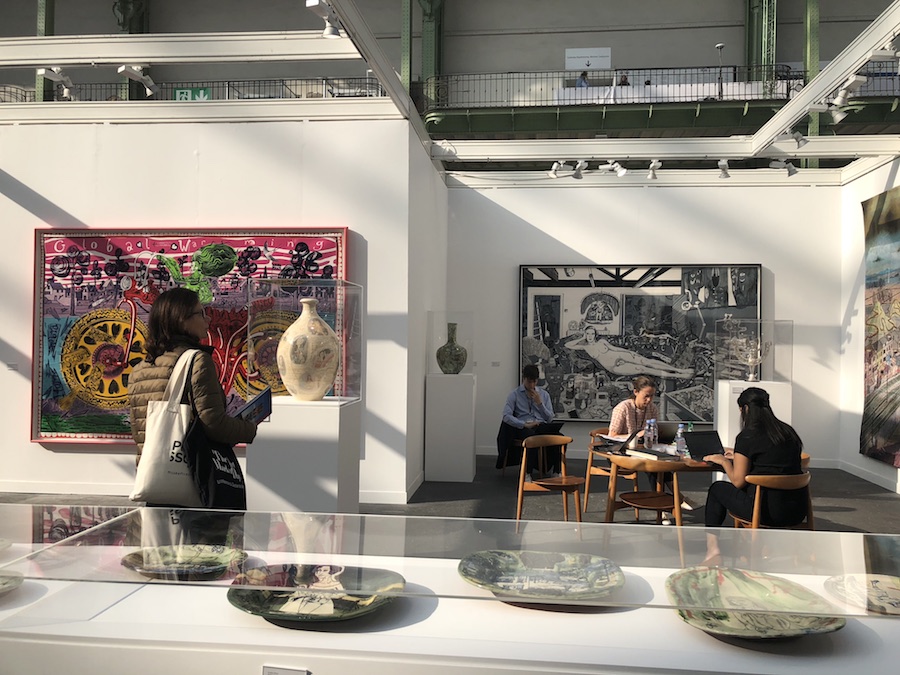 To celebrate Grayson Perry’s first major solo exhibition in France “Vanity, Identity, Sexuality”, at the Monnaie de Paris, Victoria Miro had a solo booth dedicated to the artist at the fair with his iconic tapestries, prints and ceramics. 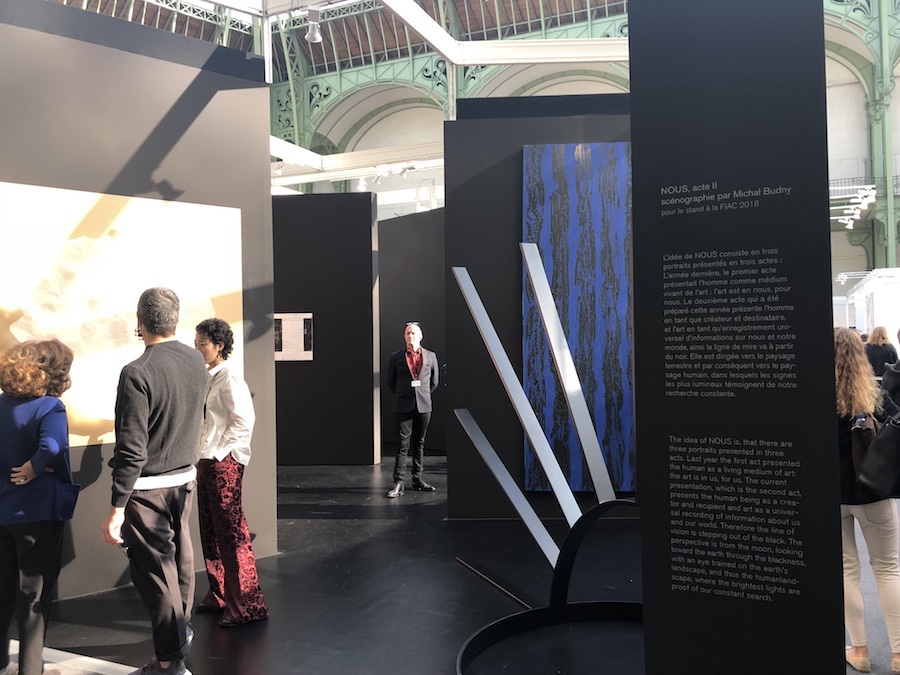 The Polish artist, Michal Budny, conceived this year again the booth’s scenography for Gallery Nachst St Stephan Rosemarie Schwarzwalder – the second act of his three-act work, one for each FIAC edition focusing on US/Nous and Art. Can’t wait to see the last act at FIAC 2019. 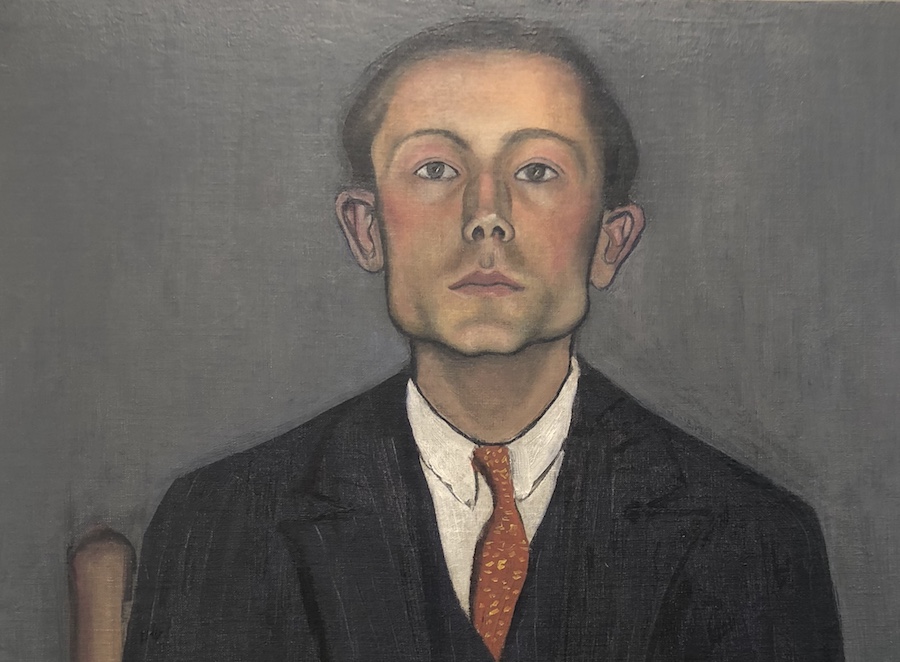 Strolling through the alleys of the fair, I spotted various real gems : like the rare Keith Haring (Sumi ink on paper 1989) at Gladstone Gallery; the historical paintings of Huang Rui, one of the founders of the star movement in China in 1979, at Boers-Li; the portrait of Gerhard Yensch from 1935 by Alice Neel at David Zwirner; and Jonathan Binet (at Balice Herling) who deconstructs the conventions of painting and uses traditional elements of painting – canvas, stretcher bars, paint – in non-traditional ways. 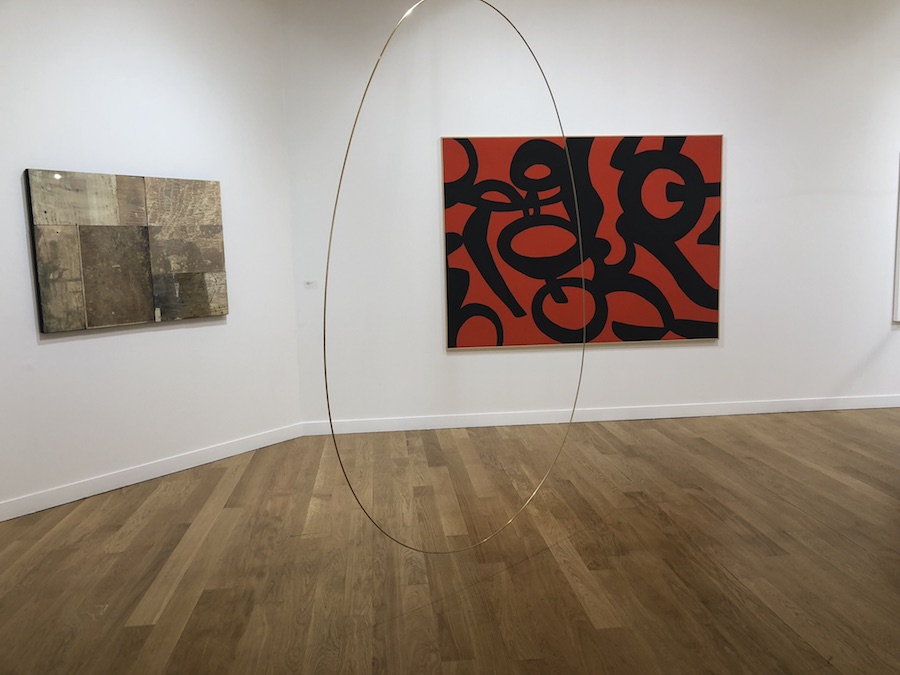 My friend, the Paris-based Art Historian and Art Advisor Anne Muraro shared with me her “coup de coeur” on the first floor where the youngest galleries exhibit.
There was Alice Ronchi totem in white onyx both conceptual and sensory at Francesca Minini Gallery.

Also on display were Ismaïl Bahri’s sensitive and precise video works and Nidhal Chamekh’s drawings and image montage at the Selma Feriani Gallery. Then there was Richard Baquié at the Thomas Bernard – Cortex Athletico Gallery. The French artist (he passed away in 1996) reinvented the notion of sculpture in the lineage of Object Pop Art in the US and New Realism in Europe. He freed himself from traditional conventions, taking inspiration from a large spectrum of all visual, formal, allegorical and imaginary resources to create his assemblage.

Also exhibited was Derrick Adams at the Anne de Villepoix Gallery. The multidisciplinary New York-based artist focuses on the fragmentation and manipulation of structure and surface. His “Patrick Kelly” series are an extensive research on the legendary African-American fashion designer.

I left FIAC Art week wondering how the London Art World will survive the tsunami of Brexit : Will Paris regain the attractive space it historically had? Will FIAC week overtake Frieze week? Exciting times ahead…