I had never experienced a Frank Gehry up-close. Never stood slack-jawed, gawping at the gymnastic splendours that the photographs in the glossies promise. I had actually seen Frank Gehry speak once, at a talk in the Neue Staatsgalerie in Berlin, where Mies’s pure black box barely managed to contain the explosive images of a new architecture that burst forth from the screen. When I left, the organic asymmetries of his earlier freeform fellow traveller Hans Scharoun’s Philharmonie and Staatsbibliothek, that stand a safe distance away from the Staatsgalerie seemingly keeping a watchful eye on its rectilinear purity, like a stakeout of a dangerous rival modernist, were suddenly much more amenable, more natural. Mies’s modernism, however, had subsequently won, had broken out to take over the world, but now Cap’n Gehry and the US cavalry were back to save the day, to regain the high ground for design Liberty and Freedom. I was thankful and glad.

“Architecture should speak of its time and place, but yearn for timelessness” – Frank Gehry

So it was in anticipation of a fat archifest that I set out on a torrential morning in Paris to go and see Gehry’s Louis Vuitton Foundation art gallery in the Bois de Boulogne. At last, I would have one of his slippery spectacles before me, to see if the line between glitz and architecture was true or false and something which Gehry’s spectacular compositions had blown apart and rendered as quaintly irrelevant. 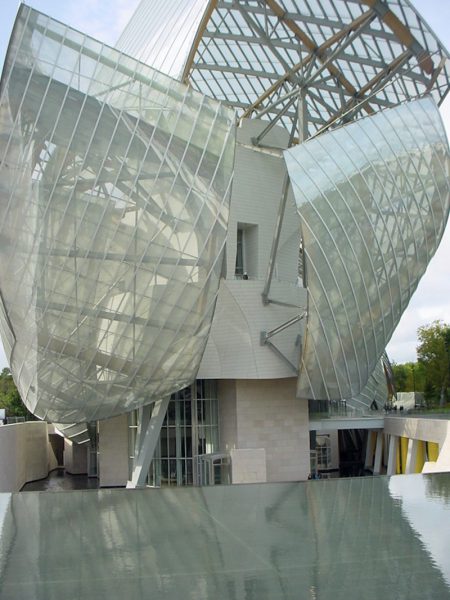 And there was more to my eagerness than to finally discover what Gehry was about – I looked forward to encountering the polar opposite of what so much current architecture in Britain seems to be, which is safe, environmentally concerned in a correct sort of way, well mannered and, above all, sin of sins, not embarrassing. I wanted to see a building that was not looking over its shoulder in fear of its own exuberance, one that did not feel that behind every inflection and feature there had to be not only some logical explanation but, even worse, the usual puritan justification that it was making the world a better place, either through its carbon footprint, its accessibility to wheelchairs or its brilliant health and safety features.

After a muddy tramp through the park the building, the thing, came into view, all glass and trousers, like the wreckage of some beached space ship, segments and arcs and sails tumbling in line over green lawns and a really nice reflecting pool with softly tumbling water that seemed just a little too polite and pretty for the agitated architectonics that lay above it. Not that the latter didn’t look amazing. 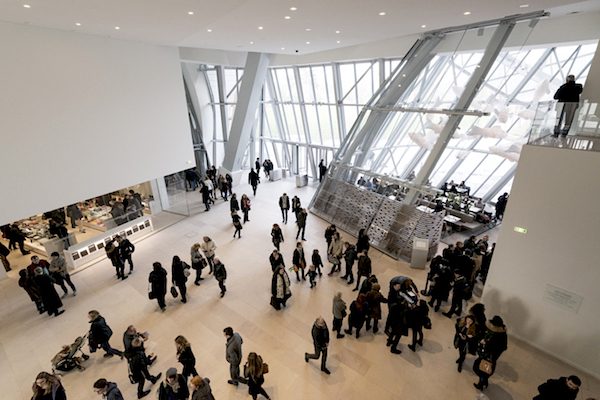 I entered the building to stand before a large and fairly shapeless lobby cum foyer with pretty ordinary vistas and a spatial treatment that appeared to fall rather short of the wonders promised outside. Perhaps the foyer’s formlessness is the result of it being a background, a negative to the positive spaces that are the purpose of the whole shebang, but even so, I’d seen better than this. The next disappointment was the miniscule cloakroom alotted to the building. Now the purpose of this little critique is not to carry out an audit on the functional success of this building’s ancillary spaces, and bogs and cloakrooms don’t really come under the ambit of architecture in my book but, surely, a mega statement like this where cost clearly wasn’t a factor and where 7,000m2 of floor space should indicate a pretty large crowd deserves a proportionately sized cloakroom, not something the size of a large cupboard. So, twenty minutes later and finally divested of my soggy garment, I forget about this strictly non-architectural glitch and am finally ready to get stuck into the meat of the place.

First stop is a few yards away, where a gallery overlooks a lecture theatre/auditorium with views of the pool below and beyond. It is a good space, enlivened by a collection of large, brilliantly hued Ellsworth Kelly canvases, and marks one end of the ground floor. Across the foyer at the opposite end is the main gallery space, a huge white neutral rectangle of a room hung with equally huge Gilbert and Georges. Alongside, between the gallery and a curtain wall, are the escalators up to the first floor. Here there are two more principal viewing spaces and no doubt a few minor others lurking about which a brief visit must miss. Each end is terminated by external terraces, partly sheltered by the large glass sails that clad the body of the building, somewhat like the segments of some giant deconstructed armadillo. The building terminates at the next level up, which is more external than internal space, all overarched by the billowing, fragmenting glass sails that stretch out from the building like spinnakers. It’s a bit like finding oneself in a frozen explosion of giant shards of glass.

The middle and top levels are where one is confronted by the full force of Gehry’s pyrotechnics, where a squall of solids and voids and gigantic fragments with tumbling views spins all over the place and where it begins to all fall apart, both literally, as the building bursts open on all sides, and metaphorically, as one’s belief begins to evaporate.

With so much happening, with so many contrived viewpoints at every turn, the whole thing assumes the pictorial quality of a stage set, designed for viewing through the lens of a camera. Perhaps this is due to the general emptiness of the terraces which, once populated with an array of sculptural counterpoints could well be transformed into some mythic landscape, but for the moment the spaces remain too raw and their intended drama too obvious. Added to this the sheer extent of architectural incident becomes self-defeating in its almost monotonous predictability. This comment, especially from one seeking something beyond the ordinary, sounds almost churlish, considering the effort and clear desire to entertain that’s gone into the building but, contrary to Mae West, you can have too much of a good thing. 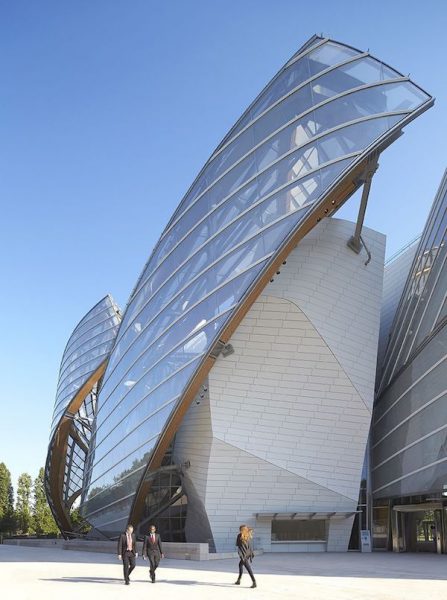 Ultimately it was the glass sails that gave the most disquiet, in their detachment from the building and their general separation from the internal spaces, resulting in a surprising ineffectuality, considering their size, to seriously shape the inner workings of the building. The result of this lack of meaningful integration with the body of the building and the external shell’s physical detachment from it, particularly exaggerated at the higher levels, seriously undermines its credibility to the degree where the sails feel little more than an overinflated stage prop. Adding to the impression of bombast are their seriously muscular armatures, where massive glulam and steel beams spring forth from points on the building in a baroque riot of structural superfluity.

On the one hand enticing, on the other superficial, daring one to come up with a coherent argument against his brash showiness or be damned a joyless wuss if one can’t. What is wrong, after all, with having fun? And who cares about breaking the rules when, as Gehry does, you can make your own? Well, nothing and no one, unless the visitor is left with nagging doubts when the thing before one fails to convince. So one tries to pinpoint the reasons why to raise up from the depths of intuition some solid grounds for this discontent. To try to identify, if only vaguely, the shimmering line where something good becomes not so good. And Gehry’s work makes this really difficult because it is so damnably visually seductive. So here goes.

The real issue here is the glass sails, which are predominantly detached from the building yet, externally, appear to be the building. So the fact that one has to distinguish between what is and what is not the actual building immediately arouses suspicion. They may be terrifically photogenic, but it is their detachment from the building’s body that makes it clear that photogenity is their principal if not the sole purpose. They are self-serving and focused only on creating their own wonderful effect. As a piece of stand-alone sculpture they would be great, but here they are part of a building that they seem to have forgotten.

And even if, in the act of supreme will and magnanimity we were to accept the sails as being part of the building, indeed as the building. What then? Then, I think, one’s criticism could be even more harsh, because then it would be fair to say that the building’s formal treatment has overreached itself, for here the movement that was intended to animate the design is frozen in too literal and obvious a representation, as simply an image of movement. We’re bordering on kitsch here; it’s not, but he’s sailing close.

Perhaps I should never have entered the place. From the outside, it is absolutely amazing – sleek, beautiful, alive, enticing. Something that has to be entered and explored. And understood. And believed. Now there’s the rub.