Welcome to our Artlyst Frieze LA 2020 printable pull-out Guide, This is our curated choice of the events not to miss during the busiest week in the Los Angeles Contemporary Art calendar. Running February 14-16, 2020. Preview days 12-13 February. Check out the bottom of this article for our satellite recommendations.

Last year the debut of Frieze Los Angeles riveted the city to art, and the art world to Los Angeles -Bettina Korek 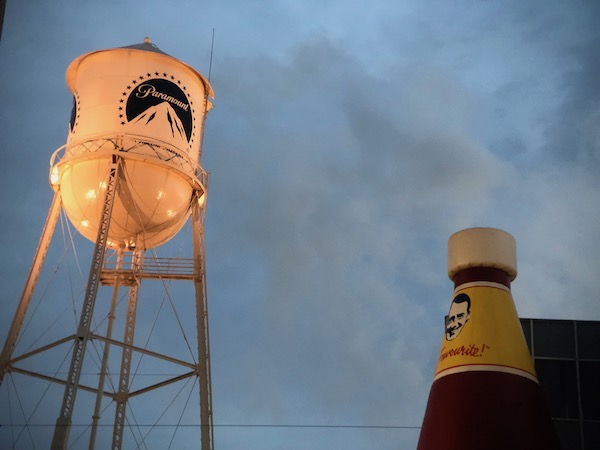 Co-curators Gonzalez and Tompkins Rivas said: ‘For the second edition of Frieze Projects we wanted to globalize the selection of artists, while thinking in particular about Los Angeles’ relationship to the Americas. Many of the works draw on the political context within which we are operating today. Latinx and Latin American art and histories are put into focus with projects by Tania Candiani and Gabriella Sanchez, while works by Gary Simmons and Lorna Simpson touch on themes of visibility, identity and self-fashioning in relation to the African American experience. Another idea was to bring in artists, such as Vincent Ramos and Channing Hansen to work within the archive and legacy of Paramount Pictures Studios, deepening the program’s conversation with its filmset location.’

Presented by Karma and David Kordansky

A series of bronze sculptures reconfiguring metal die-cast toys to create new narratives and associations, while evoking a sense of nostalgia.

A performative installation exploring technology and labor, drawing correlations between the forced work of Japanese Americans incarcerated in concentration camps in California during WWII and current migrant detentions camps along the US/Mexico border.

A collective performance which uses dance as a restorative act to reclaim time, space and emotional energy.

A video work taking an intimate look inside people’s wallets and their contents, providing a broad portrayal of people living in Brazil across gender, race and class.

A new sculpture of a palm tree cell phone tower, shining light on the ways in which Hollywood’s stagecraft has spread to urban planning.

A site-specific, fiber-based installation with a durational performance drawing inspiration from both Duchamp and episodes of Star Trek.

Huffman’s first outdoor sculpture appropriates elements of cinematic visual culture and pays homage to Grace Jones in A View to a Kill.

Presented by Hannah Hoffman and Bortolami

Kasten gives a new life to Intervention, a sculptural installation that evokes the backdrops of pictorial and filmic production while echoing the Bauhaus and Constructivism.

A site-specific installation investigating both the absence and presence of the Mexican and Mexican-American / Chicano experience within Hollywood film production, specifically through the movies produced by the fair’s host, Paramount Pictures.

Playing with language and imagery, Sanchez’s banner and other pieces engaging with signage on the backlot, reference Chicanx and barrio culture, notions of masculinity, and layered meanings through text.

A restaging of the artist’s historic work Backdrop Project first shown at Metro Pictures, New York in 1993. By taking Polaroids of passers-by and offering a copy to his subjects, Simmons explored the power of self-fashioning and authorship.

Simpson collaborates with a group of African American ballet dancers on a two-channel video, addressing issues of gender, identity, memory and representation.

A neon sculpture exposing the power of Hollywood’s constructed narratives in our contemporary life, while resonating with timely political issues.

A video and installation weaving together a 1981 incident in which Muhammad Ali talked a suicidal jumper off the ledge of a building in LA with the 1983 hit Jump by Van Halen.

A performative installation with related photographs that co-opts and upends the guitar solo through a conjoining and doubling. Using two guitars grafted together, Tsabar and a partner turn the performative gesture into an act based on intimacy and cooperation.

Frieze has announced the locations for Barbara Kruger’s public art project Untitled (Questions), which will be realised throughout the city for Frieze Week Los Angeles, February 10 – 16. Frieze has collaborated with Kruger on the central campaign for Frieze Week, featuring twenty questions created by the artist and displayed on digital billboards, light pole banners, murals, print and digital media. Untitled (Questions) is part of the expanded Frieze Week program of exhibitions and events that will run throughout the second edition of Frieze Los Angeles. 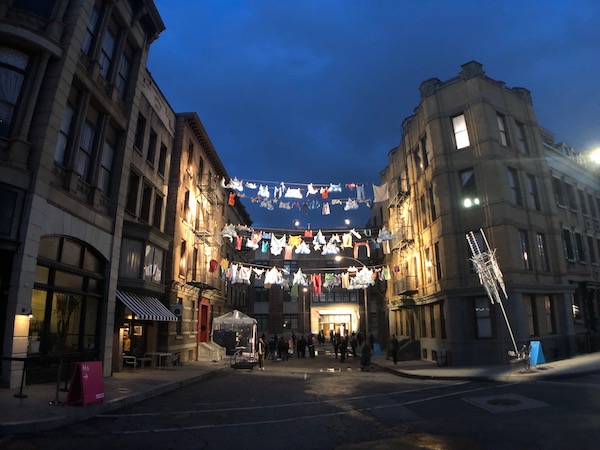 A further special presentation of Kruger’s series is also at NeueHouse Hollywood which will feature a major mural on the facade of the landmark 1938 CBS Radio Building and Studio. The iconic building was restored by owner Kilroy Realty and designed by Swiss-born architect William Lescaze This location is co-presented by Frieze Los Angeles and NeueHouse. supported Kilroy Realty.

At The Standard, Downtown LA, another converted mid-century landmark — formerly the Superior Oil Building, constructed in 1956 — will host a large-scale artwork on the 6th Street Mural wall that reads ‘WHOSE JUSTICE?’ This location is co-presented by Frieze Los Angeles and The Standard.

Organized by Frieze Los Angeles Executive Director Bettina Korek, the project brings Kruger’s provocations/interrogations, which are indeterminate and open to subjective interpretation, into physical proximity with the public. Korek said: ‘We are extremely honored to have collaborated with Barbara on the Frieze Week campaign, her work stands on its own and speaks for itself. This project trusts that in an age of distraction, people still pay attention. It’s quintessential how her choice of words balances directness and ambiguity, how they invite a viewer to read into what is being asked as well as what isn’t. We are so grateful to the partners who have collaborated with us to bring this iconic, iterative, thought-provoking project to sites around the city.’

Description: on the 6th Street Mural wall outside of the The Standard, Downtown LA 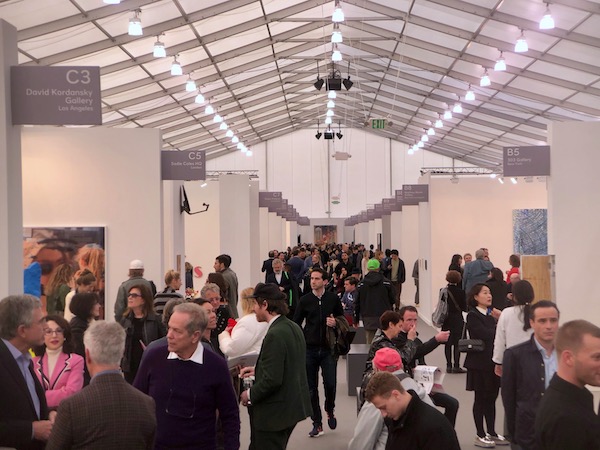 – Frieze Week 2020 will center around a project by Barbara Kruger. Twenty questions composed by Kruger such as “IS THERE LIFE WITHOUT PAIN?” will be installed outside a number of prominent art spaces and landmarks around Los Angeles, as well as integrated into all of Frieze Week 2020’s print, online, and outdoor marketing materials.

– The introduction of Focus LA, a feature section providing a platform for emerging Los Angeles spaces that have been open 15 years or fewer, underlining Frieze’s commitment to the city’s vibrant cultural landscape. Curated by Rita Gonzalez (Terri and Michael Smooke Curator and Department Head of Contemporary Art, LACMA)

– Frieze Film will be curated by Venus Lau ( K11 Art Foundation) and focuses on themes of visibility and invisibility – and LA as the perfect meeting place for cultures.

– The Artist Street Fair will provide a platform for local creative enterprises and artist initiatives across LA such as Artists for Democracy, A-Z West and Ooga Booga

Bettina Korek says: ‘Last year the debut of Frieze Los Angeles riveted the city to art, and the art world to Los Angeles. This year we are again inviting Angelenos and visitors alike to enjoy a celebratory experience of art in LA – not only at the fair, but all around the city. We could not be more proud that the campaign for Frieze Week driving this activity is built around a public art project by the legendary Los Angeles artist Barbara Kruger. There is no other city like LA, which generates creativity for the entire world in so many modes.’

Victoria Siddall (Global Director, Frieze) adds: ‘We are excited to return to Paramount Pictures Studios in February for the second edition of Frieze LA. We will welcome major new galleries to the fair, from Brussels to Cape Town, Mexico City to New York, as well as a host of exceptional curators creating ground-breaking programming. The fair will be at the heart of Frieze Week, an exciting program of exhibitions and events that spans the whole city and celebrates LA’s extraordinary cultural scene.’

This year the fair features more than 70 leading galleries showing significant works by today’s most prominent emerging artists alongside major figures in contemporary art in a range of solo, dual, and thematic presentations.

Solo Presentations from Today’s Most Prominent and Exciting Artists:

Curated Programming Beyond the Gallery Booths:

Accompanying Frieze Projects and presented on Paramount Studio’s iconic backlot set, the Artist Street Fair will give a snapshot of the many types of local creative enterprises found around LA. Visitors to the Street Fair can learn about the missions and programs of different artist-driven organizations and accessible ways to support them. Participants include: GYOPO, Poetic Research Bureau, Ooga Booga, Women’s Center for Creative Work (WCCW), Artists for Democracy, Re:la, grantLOVE, Queen of Angels, Arts for LA, Acid-Free, Street and the Shop, Art Book, A-Z West, Pretend Plants & Flowersand Cactus Store, and ForYourArt, whose booth will present TELETHON ForYourArt, a live-streaming series of interviews with other Artist Street Fair participants, Angelenos, and visitors to Frieze L.A., hosted by Tierney Talks – the podcast of local writer and artist Tierney Finster. 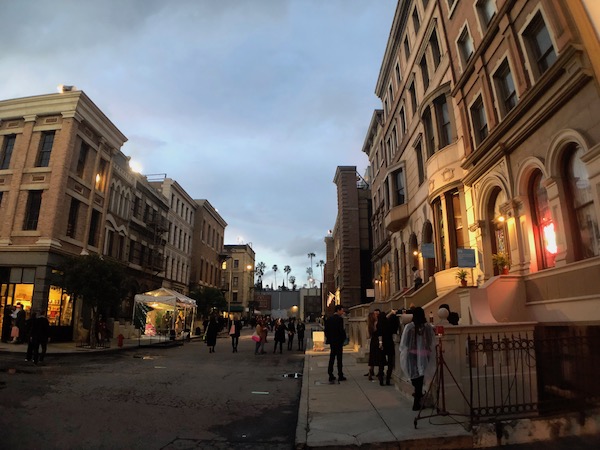 The famous Paramount backlot will also play host to a selection of pop-ups from some of LA’s most beloved restaurants including Cha Cha Matcha, Craig’s Vegan, KronnerBurger, My 2 Cents LA, Roberta’s, Sqirl, Tacos 1986 and Umi.

Curated by Venus Lau, the Frieze Film & Talks program will take place in the Paramount Theatre and focuses on themes of visibility and invisibility – and LA as the perfect meeting place for cultures.

In addition to the screenings, Frieze Film participating artists will talk about their work including Yang Fudong from 2.00pm – 3.00pm on Friday February 14 and item idem from 1:30pm – 2:30pm on Saturday 15, in the Paramount Theatre.

In addition to the Frieze Film program, Frieze Los Angeles and Regen Projects will host a special screening of Redoubt, the new film by acclaimed artist and director Matthew Barney, with comments by the artist. The screening will take place on Saturday 15 February.

This year’s summit is held on February 14 and 15 in the Sherry Lansing Theatre at Paramount Pictures Studios, with panel discussions that bring together various patrons, civic leaders, gallerists, and arts administrators to discuss perspectives on art patronage. Each conversation is co-presented by a different philanthropic partner active in Los Angeles and will explore themes of collecting, institutional fundraising, and direct support to artist projects, with special consideration for the context of an art fair.

Another highlight of the fair’s program is the Deutsche Bank Frieze Los Angeles Film Award, realised in partnership with the award-winning, non-profit film academy Ghetto Film School (GFS) which provides a platform to support the grassroots film community in Los Angeles. The entries will be judged by Doug Aitken, Shari Frilot, Jeremy Kagan, Sam Taylor-Johnson and Hamza Walker. The award ceremony will be held from 6-7pm in the Paramount Theatre on Thursday, February 13. To attend please email FilmAward@Frieze.com.

This year will also feature an expanded Frieze Week program of exhibitions and events across the city, including a public art commission by Barbara Kruger. Posing a series of questions such as ‘IS THERE LIFE WITHOUT PAIN?‘, Kruger’s project will be installed across Los Angeles. 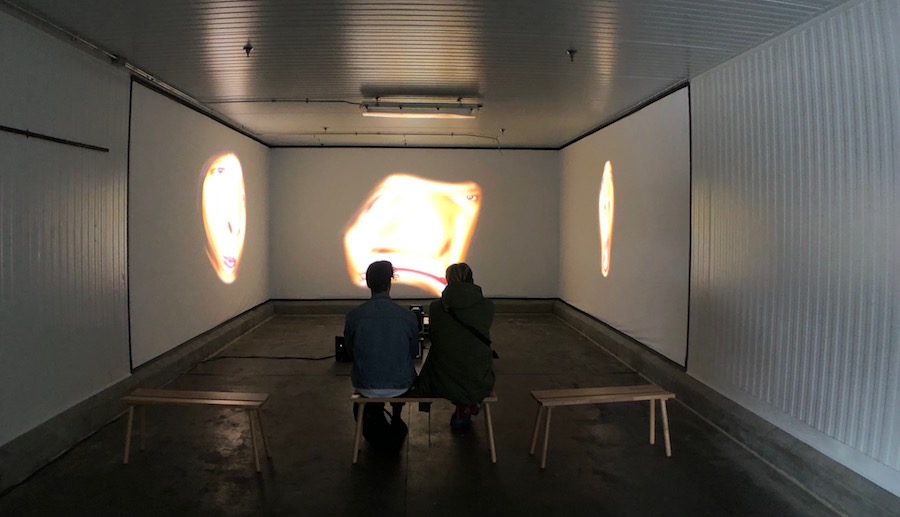 Felix was co-founded by Dean Valentine and brothers Al Morán and Mills Morán. The fair’s mission is to create an intimate experience that prioritizes connoisseurship, collaboration, and community. A return to the hotel fair format, in the spirit of the storied Gramercy International Los Angeles at the Chateau Marmont, Felix grants galleries an efficient exhibition opportunity while offering the city’s collector-base intimate access and maximum flexibility. The informal setting allows for more extended conversations among collectors, dealers, and artists alike. In 2019, the inaugural edition of the fair welcomed a diverse creative audience, bringing in over 12,000 guests to experience galleries from Europe, North America, China, South Africa and Australia.

The three-day art fair brings over 80 artists together to transform The Kinney Venice Beach hotel into a unique and exciting contemporary art experience. Meet and buy artwork directly from the artists themselves in an approachable and relaxed environment where the art and artists come first.

After nine years in Santa Monica, Art Los Angeles Contemporary is relocating to Hollywood. ALAC 2020 will span the Athletic Club’s two floors, inhabiting both its vaulted ceiling ballroom and its athletic infrastructure, including a gymnasium and racquetball courts. The 11th edition of Art Los Angeles Contemporary will present forty-five galleries in an open format floorplan.