Whether you reach the luxurious tent that is Frieze by waterway or highway, the art fair’s weekend home on Randall’s Island is as accessible as the art itself. Now in its sixth year, the 2017 fair is a feel good art fest where ‘pretty’ and ‘pleasing’ is no longer a put-down. The offerings are surprisingly non-confrontational while still politically relevant. Everyone at the preview seemed light footed. At a time when mainstream media, alternative media and social media are all screaming scary stuff,  perhaps now is a time to enjoy art as an oasis of beauty.

The works presented in the more than 200 gallery booths are rich in craftsmanship, virtuosity and imagination. They include photography, mixed media, sculpture, installation, and lots of good painting. The paintings are about colour, about people, about dreams and run the gamut of abstract to photo realistic.  Compositions are beautiful and feel personal.  Even the pricing of work seems considerate. Beside every $100,000 work, is something for under $10,000.
Walking down the aisles you see a well-paced mix of established and emerging artists. The ones in their 70’s and 80’s cosy up well with the younger set. Pairings at Massimo de Carlo ’s booth of Sanford Biggers beside a John Armleder, create an unexpected dialogue between artistic decades. 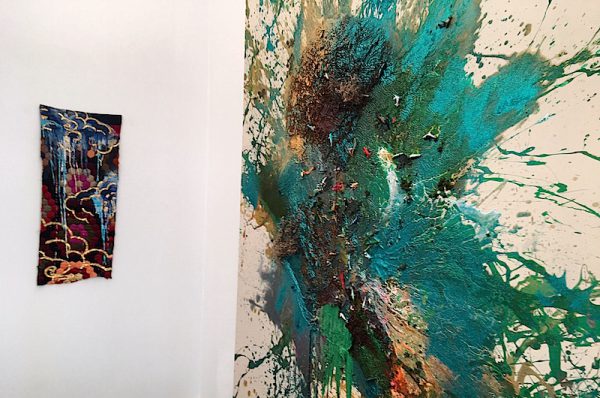 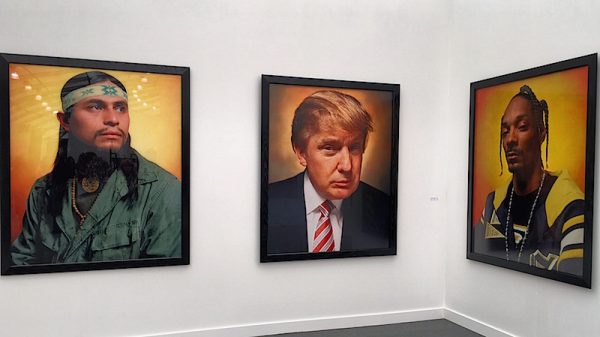 Entering the fair one is greeted with the larger than life photographs from Andres Serano’s series “America”.  Drawn from a continuing series conceived in response to the 9/11 attacks, Serrano’s photographs are portraits of people from all walks of life including firemen, migrant workers, Native Americans, pop stars and celebrities including America’s current President, Donald Trump. The subjects, backlit, often gazing upwards, have a divine-like quality and Old Master’s elegance. 65×55 inches, they start at $35,000, and some, like the blood stained American flag, e sold out. 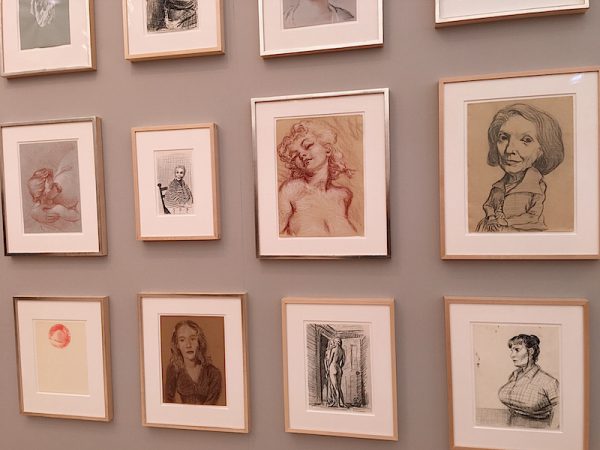 Gagosian did a whole booth filled salon style with drawings by John Currin. Frith Street had fragments of Jimi Hendrix’s staircase hung on a large wall. It is a 2016 piece by Cornelia Parker (Top Photo) called ‘There must be some kind of way outta here’. 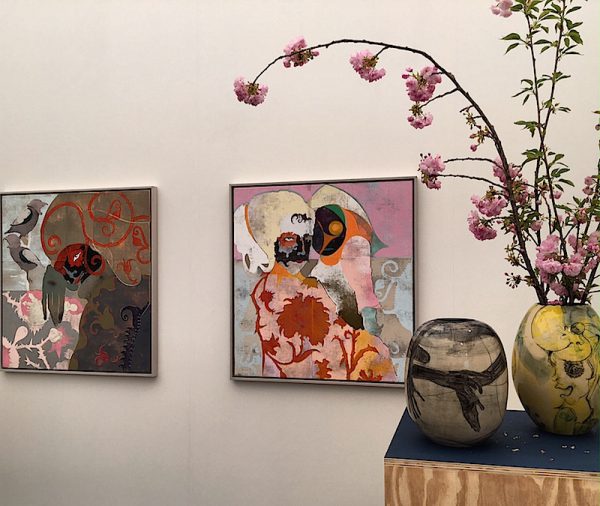 Paintings and ceramics by the twin brothers Get & Uwe Tobias

A pretty pretty booth that rang with poetry was from the Belgian Rodolph Janssen gallery who showed paintings and ceramics by the twin brothers Get & Uwe Tobias. 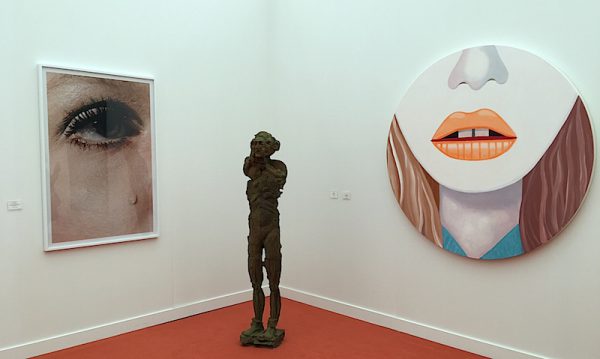 Anton Kern gallery, the last gallery I saw upon exiting, had a typically well-curated booth of a photo of a giant eye by Anne Collier near a giant mouth painted by Brian Calvin.

Presenting museum-quality exhibitions in a bespoke, light-filled structure designed for the experience of art, Frieze New York offers an immersive cultural experience for major institutional and private collectors, scholars and art enthusiasts alike. With galleries joining from six continents, including first-time exhibitors from Brazil, Guatemala, Japan and Poland, the fair illuminates the aesthetic, political and historical concerns driving contemporary practice around the world.

Top Photo: Cornelia Parker ‘There must be some kind of way outta here’ Frith Street Gallery and all additional photos Lizanne Merrill © Artlyst 2017