From Botticelli to Tillmans. 160 of the world’s leading galleries at Frieze, 130 at Frieze Masters, over 1000 international artists. No sign of the Brexit-uncertainty and escalating political instability. No sign that Britain is in the midst of an economic and political crisis. Dealers did good business.

Galleries went strong on painting. There was certainly a renewed interest as many exhibitions were focusing on the traditional medium

“It’s not the time for expensive and ambitious installations, but for small and medium scale paintings. It’s equally not the moment to take risks and introduce an unknown figure to the current art world.”

Painting is always a safer bet. “When a recession looms, everyone goes back to painting. It is the equivalent of gold in art terms” artist, Shezad Dawood.

Walking distance from Frieze to Frieze Masters, every year, Frieze Sculpture turns the English Gardens of Regent’s Park into an outdoor art installation. This year Tracey Emin slept on the grass in a monumental bronze form “‘When I Sleep”, giant bunnies were hopping with Tom Sachs “My Melody” and Leiko Ikemura “Usagi Kannon II”. Acute Art presented the first augmented-reality art piece that Frieze has ever mounted, Koo Jeong A’s “Density”. The artwork required to download an app to view the piece through a mobile phone, where the sculpture resembled a giant, floating block of ice.

Even Extinction Rebellion gathered at the entrance of Frieze to engage dealers and VIPs to recognize the climate emergency. An art piece or more like an ice-piece by Massimo Agostinelli was left to melt outside the entrance.

“Should artists have a sustainable practice?” I asked Antony Gormley during collectors’ day. “We are all in the middle of the climate crises … I think at the end you want to touch people”.

Meanwhile, Trinity Fine Art has certainly got the attention for the Italian Renaissance painter Sandro Botticelli’s $30 million painting of “Michael Tarchaniota Marullus”, the most expensive work ever to come to Frieze Masters and reputed to be the final work by the artist in private hands. 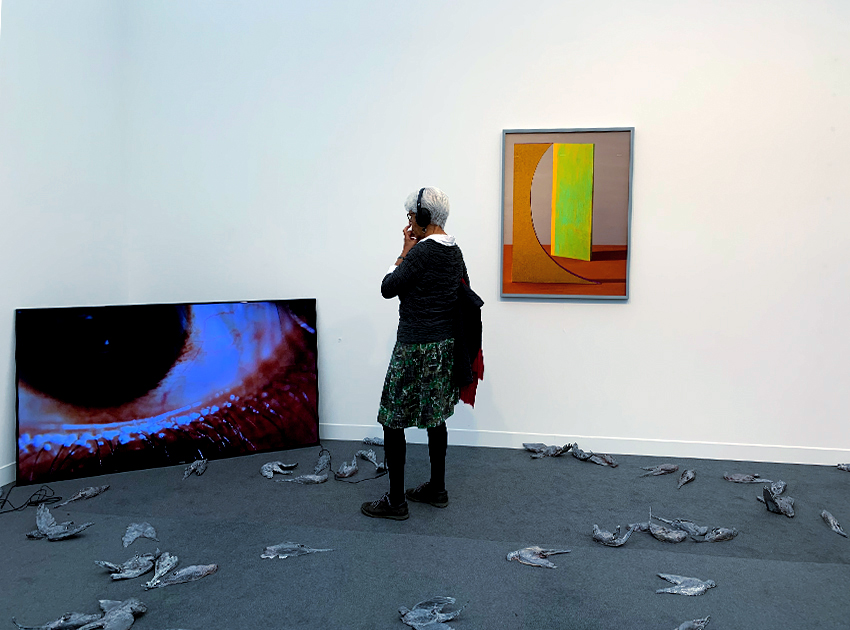 Artist Patrick Goddard used dead parakeets to give voice to the climate change.

The creative industry is often criticised for its carbon footprint, yet some artists were acknowledging the climate crisis this year at Frieze. “Blue Sky Thinking” is composed of 180 dead parakeets made from reclaimed lead and strewn across the floor; “It is designed to strike a chord” said Dave Hoyland, the director of Seventeen. “It’s going to take a disaster, like all the birds dying, for people to take notice of the climate crisis”. However, others argue that, despite the strong visual message of this work, the amount of money that spent on fine art compared to that spent on the climate crisis is outstanding. Goddard’s piece was valued at £18,000. Make sure you don’t step on dead birds. 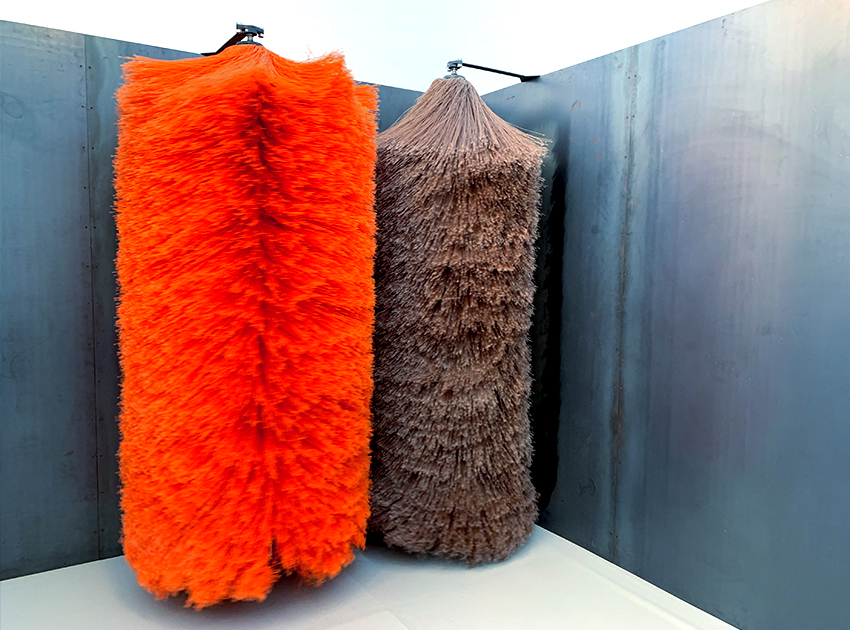 Italian artist Lara Favaretto at Galleria Franco Noero presented a kinetic art piece, two coloured car-wash brushes that take turns to spin against a wall of iron slabs, gradually eroding and changing them over time. The friction creates heat which melts the tips of the plastic bristles, while also creating an electrostatic charge which causes the metal to attract detritus and dust. “Taboo” is brilliant ode to minimalism, but do we get replacement brushes? 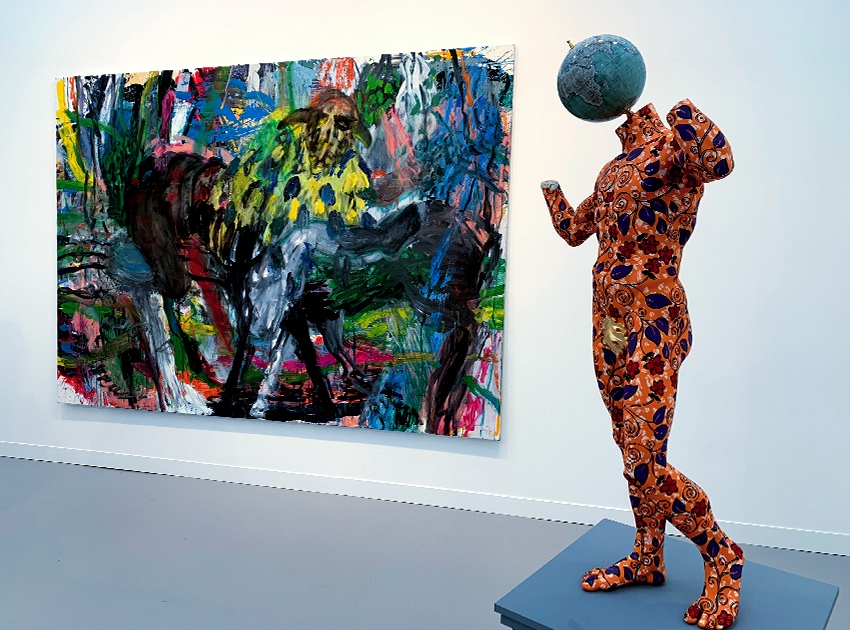 The Gallery has held the reputation as a pre-eminent art gallery on the African continent since 1966. Goodman Gallery is an international contemporary art gallery with locations in Johannesburg, Cape Town and now in London. The gallery represents artists whose work confronts entrenched power structures and inspires social change. The London gallery opened during the summer 2019 railed against “heightened nationalist sentiment and populist politics”. The gallery’s owner and director Liza Essers said, “It’s about promoting social justice.”

Her words came true. The Goodman gallery returned strong to Frieze and also to 1:54 Contemporary African Art Fair at Somerset House. In the courtyard “The Fortress”, part of “The Building Series IV” of Kiluanji Kia Henda was opening the fair.

At Frieze, the gallery presented Yinka Shonibare CBE. He was born in London, at the age of three moved to Lagos, Nigeria and returned to the UK to continue his studies at Goldsmiths College. He is known for his exploration of colonialism and post-colonialism within the context of globalization.

Through his interdisciplinary practice, Shonibare’s work examines race, class and the construction of cultural identity through a political commentary of the interrelationship between Africa and Europe, and their respective economic and political histories. In 2013, he was elected as a Royal Academician. For Frieze, Shonibare created dynamic figures in motion, dressed in Victorian costumes reproduced in batik fabric. In his ongoing series of classical figures, the bodies have been hand-painted with batik designs.

Goodman gallery’s Zimbabwe born artist, Misheck Masamvu exhibited some large-scale paintings, exploring on the socio-political setting of post-independence Zimbabwe and drawing attention to the impact of economic policies that sustain political mayhem. Masamvu raises questions and ideas around the state of being and the preservation of dignity. His works serve as a reminder that the artist is constantly socially engaged and is tasked with being a voice to give shape and form to a humane sociological topography. 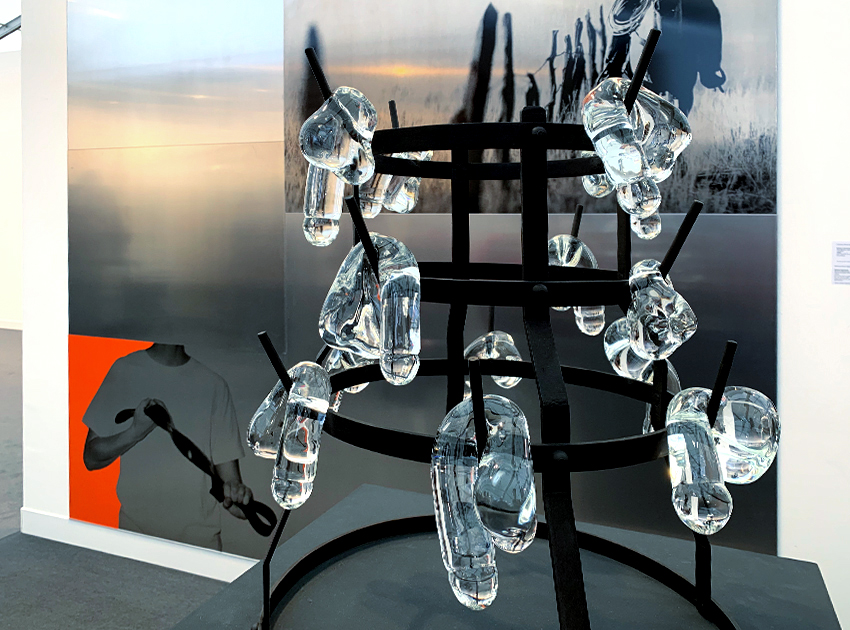 The gallery presented cowboys and glass penises, one of the most photographed art pieces by Monica Bonvicini. Bonvicini’s broad body of work deals with complex issues of gender, power and control. The carefully choreographed scores often start with her investigations on violence and manipulation are juxtaposed with beauty, desire and intimacy.

In the “Under the title bind me! torture me!” the space opens with an architectural installation, a wall with silkscreen images of the iconic and stereotyped romantic male figure of the strong, uncommitted cowboy. 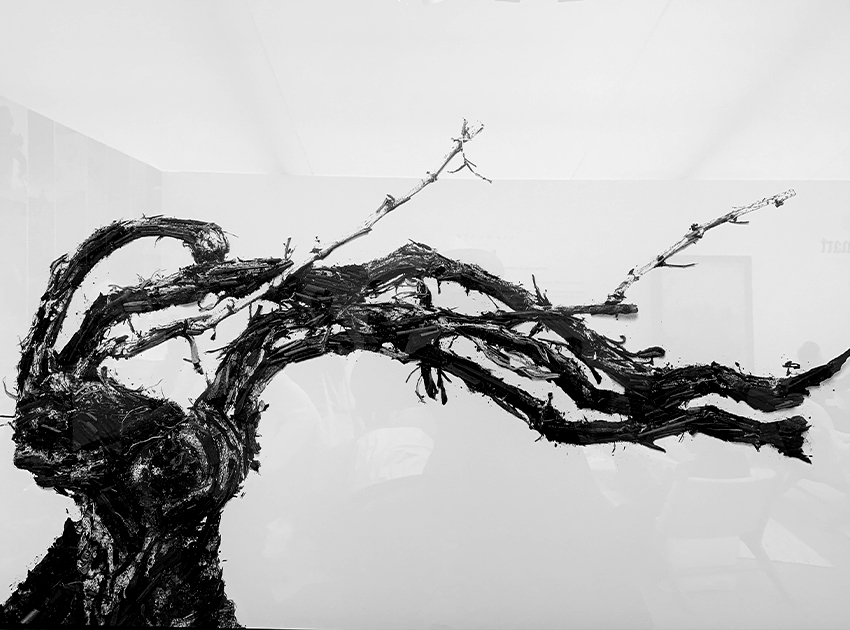 In 1729 “wine with bubbles” was a business gift for cloth purchasers as Dom Ruinart’s brother was a cloth merchant, but six years later the Maison Ruinart terminated its fabric trade due to the success in champagne. Since Maison Ruinart has built a long-standing relationship with the Arts.

Although Maison Ruinart is not a gallery, their philanthropic work is outstanding. Year after year they express their commitments to art, working with international artists, building a year-long travelling exhibition worldwide. At Frieze London they presented large-scale photographic prints and a time-lapse animation from the series “Shared Roots” of Brazilian artist and photographer Vik Muniz.

Muniz was inspired during the harvest in Sillery, near Reims, and created a series of works based on the idea of flow with pieces of blackened wood and charcoal. 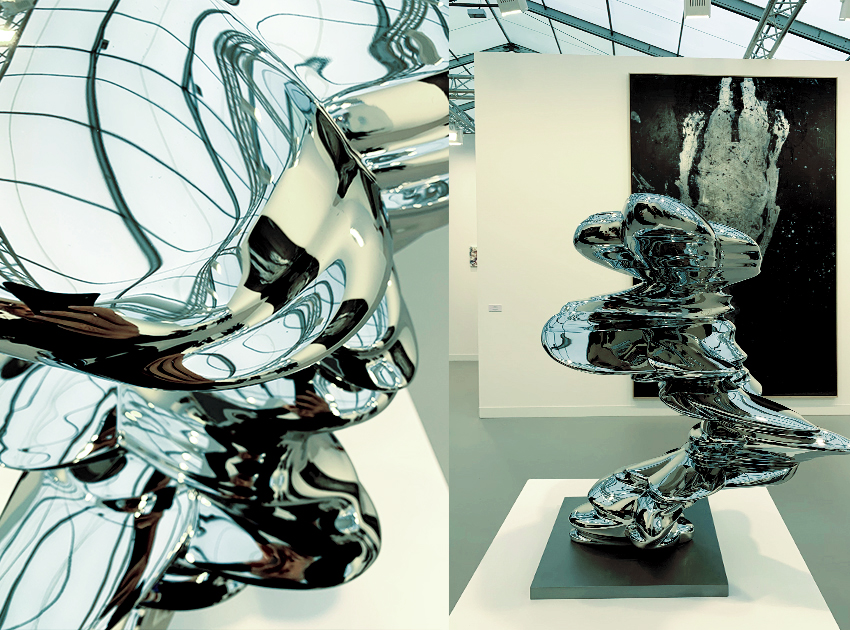 At the center of the gallery booth a large stainless-steel piece emerged by Turner Prize winner sculptor Tony Cragg. In the late 70s Cragg questioned and tested the limits of a wide variety of traditional sculptural materials, including bronze, steel, glass, wood, and stone. One of the most unique qualities about Cragg’s sculptural process is the primacy of the material. “I’m an absolute materialist, and for me material is exciting and ultimately sublime”. Signature to his work are the employment of horizontal extensions of the biomorphic form, or inversely, the verticality of his pillar-like sculptures.

Behind Cragg’s work the gallery exhibited one of the key paintings of Georg Baselitz sold for $1.2 million. Following the great success in 2018 at Ely House, the gallery is currently showing at Paris Pantin a new series of large-scale paintings and drawings “Time”, an homage to Elke, his wife of sixty years, an enduring source of inspiration for the artist throughout his career. It is a renewed declaration of love, as well as an intimate reflection on the inevitability of ageing where the beautiful and the grotesque are intricately modulated. Georg Baselitz has refined his vocabulary of painting; the figures seem to float in an undetermined space when seen from a distance. When viewed closely, the surface treatment of the canvases reveals an infinity of details never before seen in Georg Baselitz’s work. 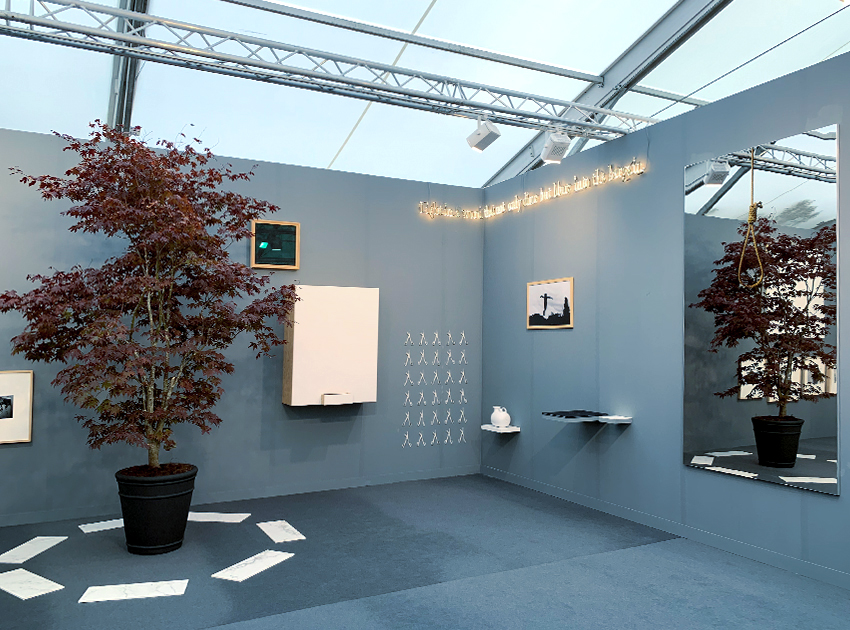 Since the 60s Kosuth has used the “curated installation” as a key conceptual and aesthetic strategy for exploring questions of authorship and the basic nature of art. His nearly forty-year inquiry into the relation of language to art has taken the form of installations, museum exhibitions, public commissions and publications throughout Europe, the Americas and Asia. His work has become part of major private and public collections including the Museum of Modern Art, NYC, the Tate Gallery, London, the Solomon R. Guggenheim Museum, NYC, the Whitney Museum of American Art, NYC. Kosuth currently lives and works in London and New York. 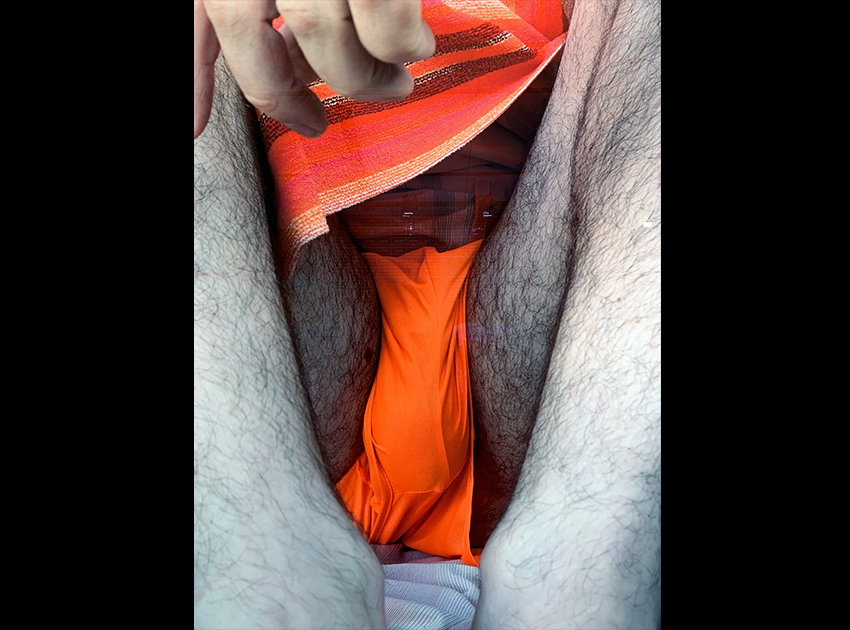 A strong masculine energy runs through at the David Zwirner gallery, starting with a crotch shot of Wolfgang Tillman’s photograph the “Layers”. The work, estimated $95,000, peers at close range between a subject’s bare legs, turning a bulge in neon orange shorts into the picture’s focal point. Zwirner has other must-haves: the reflective surfaces and controversial Jeff Koons’s “Gazing Ball”, estimated for $2.5 million, a plaster bust with a shiny cobalt orb on its head. 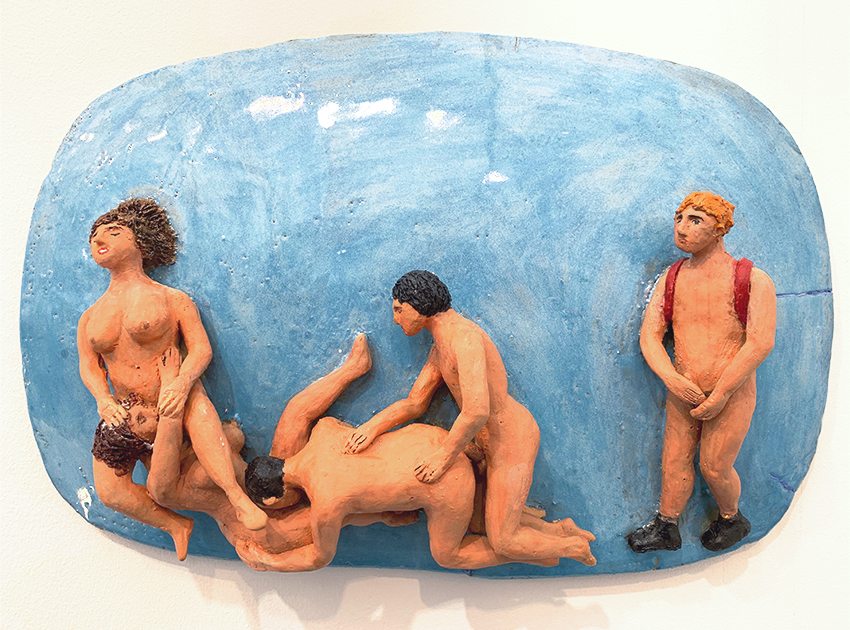 “Just close your eyes and imagine I haven’t evolved”, the most surreal ceramicist you ever had the pleasure of exploring. Japanese born Urara Tsuchiya works mainly with performance and video, often incorporating costumes and ceramics, reflecting the absurdities of human life and nature with a unique charm.

For Frieze Tsuchiya has created an installation made to look like a depopulated hotel room. A white bed is at the center with ceramic undergarments flung on the mattress and floor. Tsuchiya has also outfitted the booth with a ceramic minibar, suitcases, and dioramas: nude figures doing things in a sauna and in an unglazed, painted ceramic bowl two bears and a panda aim their wide-open mouths towards a naked man’s erect penis. 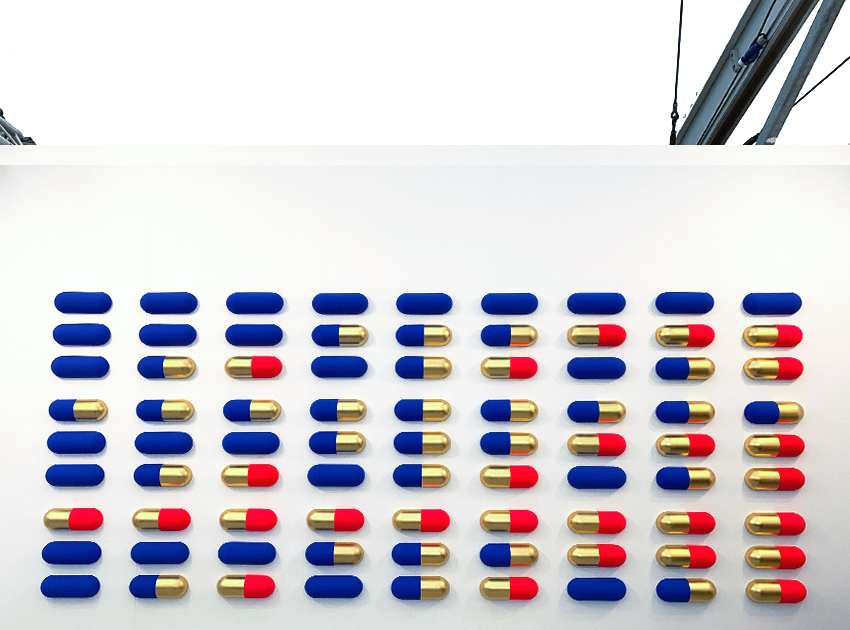 General Idea were formed in 1969 by friends AA Bronson, Felix Partz and Jorge Zontal. For the next 25 years they lived and worked together to produce the living artwork of their being together, undertaking over 100 solo exhibitions and countless group shows and temporary public art projects. They are known for their early involvement in punk, queer theory, AIDS activism, and other manifestations. The group was dissolved with the deaths of Pertz and Zontal in 1994 although General Idea’s work continues to be exhibited.

Maureen Paley exhibits an eye-catching installation by General Idea of 9 groups of 9 elements covered with gold leafs and acrylic on wood. 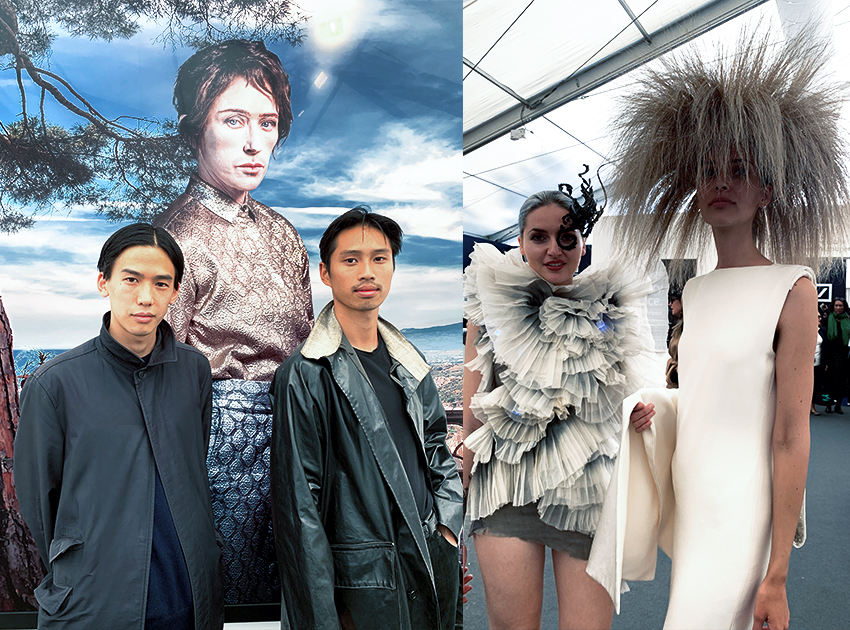 Every year we get a glimpse on current Frieze-trends, on visitors who amuse themselves by dressing up to paintings, shapes and colours. This year, for some reason, I spotted many twins. Body-double is seemingly in fashion. 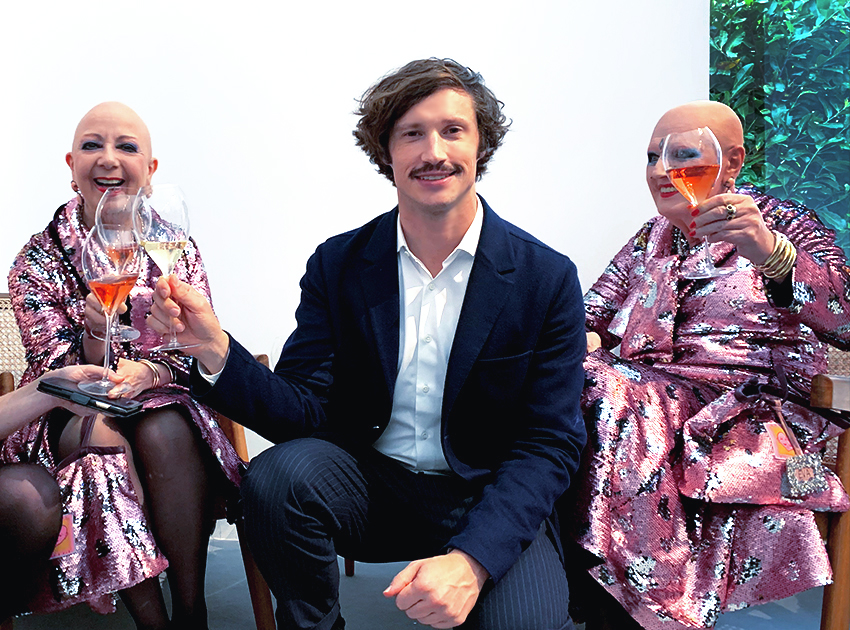