Art as a provider for entertainment or amusing distraction no longer seems viable when there are urgent concerns in the pit of our gut. Where do we turn? What do we do?  How do we make sense of the sharp angles and pivots concerning public policy in the new United States?   Everyone seems to be asking these questions and everyone seems to feel called to action. How are artists going to respond?

Artist George Boorujy feels particularly pumped to take on the environmental cause, especially since ‘Day One’ the Environmental Protection Agency has been quieted with regard to global warming. Boorujy, an artist devoted to highlighting and protecting our precious natural world says,  “This shouldn’t be a partisan issue! Democrats, as well as Republicans, need to breathe.  The environment affects the Rich, Poor, Black, White, Urban, Rural, male, female, trans and other. All of us eat food, drink water, and breathe air to stay alive”.  No argument there. He also pointed out, “You can reinstate certain civil rights that are taken away, but once you destroy a habitat, you can’t bring it back in four years.”

Boorujy’s work has always featured animals.  The animals, while not quite anthropomorphic, subliminally allude to human behavior. His realistic, anatomically correct renderings of distinctly recognisable species portray a lot more than ‘A bear’ or ‘A bird’. The animals in Boorujy’s work relay familiar and relatable feelings. The subjects are  rendered close to human size because viewers tend to react to an animal differently when it is large and on a human scale.  Boorujy says, ‘When I paint animals I can express human emotion better than I can in a painting of a person”.  When you look at pictures containing humans you get distracted by hairstyles and clothes. Animals are raw. They take your guard down. I find them a much more effective vehicle for expressing human emotion. Through my paintings, I look to find the feelings we all share.” For animals, who don’t have a lot of ‘things’ it is easier to see the underlying value that life itself is the most precious of treasures. 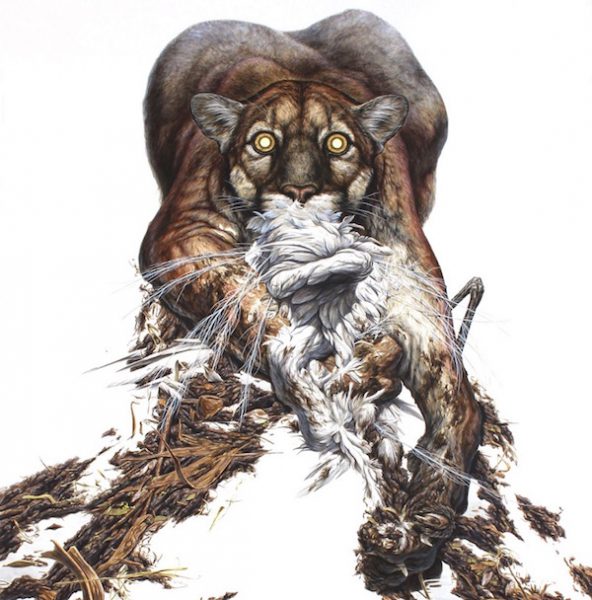 Even if you are not an animal lover or nature enthusiast (mea culpable) it’s impossible to walk past a Boorujy piece without stopping to look. His compositions capture an active moment as it is unfolding. The immediacy of the drama within each piece pulls you in.  Similar to a car accident on the highway, while you may not intend to look, you can’t keep your eyes away!  It is likewise, with these powerful works.  Boorujy says, “The first step to caring about something is to know about it. And many of us are illiterate to the natural world. That puts the environment, AND the US at risk”  We are more interconnected than we realize. We all fall prey.

Boorujy has been interested in Florida and its animals for over 20 years. He went to the University of Miami initially to study Marine Biology but he ended up majoring in fine art. Painting the environmentally challenged Floridian animals is a merger of both of his loves.  Rather than documenting the rising sea levels and destruction of Southern Florida in scientific photos, Boorujy feels a handmade painting slows the viewer down to invite contemplation and consideration.

After learning about the environmental threats to wildlife in Southern Florida, Boorujy decided to use his art to shock and shake up his audience.   He says it would be easy to use his masterly artistic techniques to paint pretty pictures that distract or entertain people. He would probably make more money if he did offer easier pleasing ‘Zombie abstraction ‘ art pictures.  Instead, he reminds us that we can spend our lives in pursuit of lazy enjoyment or we can live purposefully. He is an artist with a purpose. He paints with compulsion and reverence to shine a light on the intersection or crossover of human’s behavior and nature. 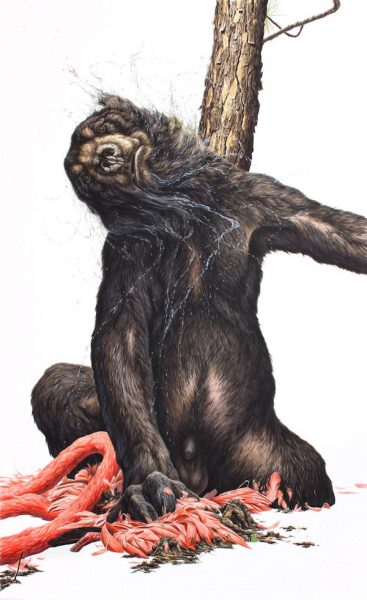 His watershed moment was realizing that what he was looking at right now, in Florida, would no longer be!  He passionately explained, “The elevation of Southern Florida in many places, especially the Everglades is barely above sea level. Within our lifetime we are going to see a major loss. Let me stress: Within our lifetime! Clearly, we see now, more than ever, our governments aren’t going to solve the problem. It’s on us now”.

Boorujy continues to work on the Florida series even though he now lives and works in Brooklyn.  Another ongoing project of his ‘The New York Pelagic Project’ has a similar but more conceptual bent.  Boorujy places one of his exquisite labored ‘bird’ drawings inside an etched and sealed glass bottle.  Boorujy then tosses the bottle into New York City waterways to meet its fate.  He writes “It’s hard not to picture the bottle in the middle of the ocean, in the middle of the night. Calm water with snow falling, strong storms, searing sun, endless drizzle. Reflecting lights of passing ships, being nosed by a whale. And eventually reaching land again.”  Well, after 3 years at sea, one of his bottles (now with barnacles) washed up in Bordeaux France. What is particularly stunning is that his ‘art adrift’ was found by an artist! The artist, a 65-year-old woman, had been walking the beach after a horrible storm that left the shore littered with dead fish and “poubelle“ (smelly garbage).  When she saw Boorujy’s message in a bottle, she eagerly opened the seal and wrote in English back to him. “ Thanks for the drawing, the cormorant is “magnifique”. I’m 65 years, I’m so happy to have found this bottle. My husband and I are going to contact the association concerned by the birds, and also by the “no respect “of the environment. Thanks for your action!”