Australian artist and documentary filmmaker, George Gittoes is an artist willing to create in the face of chaos and potential destruction. He has been travelling the world for 40 years visiting extreme situations – war zones, natural disasters and places where violence and fanaticism feature as part of everyday life. He defies categorisation, as his life defies belief; see his autobiography ‘Blood Mystic’ for corroboration. He uses painting, prints, visual diaries, field drawings, photography and filmmaking to present his work as an eyewitness account of social injustices and the difficult times in which we live.

He has been recognised for his humanitarian and peace-making efforts, awarded an Order of Australia

Equal parts artist and warrior, Gittoes has been waging war on war with art, circus, photography and film having been, over the course of his life, shot, stabbed, bombed, beaten, tortured, drowned and jailed. He has worked with Andy Warhol, dined with Fidel Castro, plotted with Julian Assange, been feted by Nelson Mandela, blessed by Mother Theresa, sneezed on by the Dalai Lama. ‘I feel privileged to have been able to spend much of my life creating beauty in the face of the destruction of war,’ he has said. ‘I have been waging a personal war against war with art.’ ‘Soldiers die for flags. For me it is art.’ 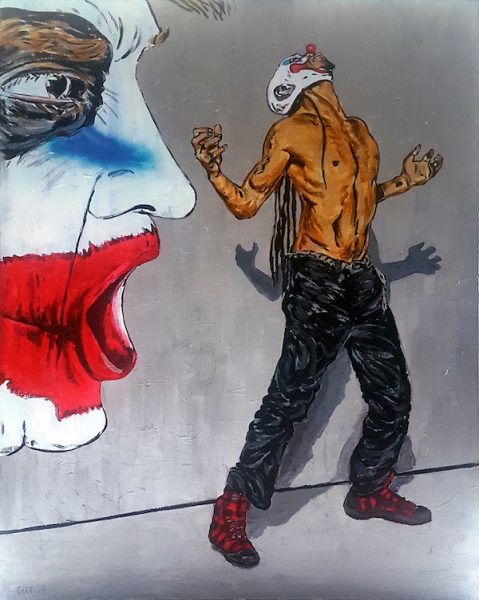 He has been recognised for his humanitarian and peace-making efforts, awarded an Order of Australia (AM) and the prestigious 2015 Sydney Peace Prize. He has also won many prizes for his painting – including twice being awarded the Blake Prize for Religious Art. His acclaimed documentaries include Bullets of the Poets (1986), Soundtrack to War (2004), Rampage (2006), Miscreants of Taliwood (2007), Love City Jalalabad (2013) and White Light (2019).

Gittoes was born in Rockdale, NSW in 1949. After working with Andy Warhol and the Black Panthers in New York, he founded the Yellow House in Sydney with Martin Sharp. Rev Rod Pattenden, curator of George Gittoes: on being there, has written that the ‘inspiration for the Yellow House lay with the example of Vincent van Gogh and his hopes for a community of artists.’ Gittoes’ contribution to the Yellow House was an elaborately painted puppet theatre where he told stories using hand crafted puppets made from liquid polystyrene, fabric, metal and paint. For this, ‘he drew on such material as Christian religious theatre, Sufi wisdom plays and contemporary theatre.’ ‘The space was titled “The Marriage of Heaven and Hell” and its design reflected his early interest in Islamic art and, more importantly, a search for a way of working that formulated an overall approach to vision and interpretation.’[i]

From there his work took on a more international scope as he travelled to places like Cambodia, Rwanda, and the Middle East as an unofficial war artist. His journeys in the 1990s took him to Iraq and Pakistan, and then to the founding of a second Yellow House in the city of Jalalabad in Afghanistan working with local artists and actors. These journeys found their most recent expression through his sojourn in 2018 in the suburbs of South Chicago, one of the worst centres for gun violence in the USA, where he made the documentary ‘White Light’.

Pattenden notes that, in many ways, ‘the shape of the work Gittoes has completed in recent years has been a continuation of influences that came together in 1986’ when filming The Bullets of the Poets on location in Nicaragua. ‘The experience of being present in a situation of revolution and social conflict inspired a new return to drawing and painting’ with Gittoes being ‘greatly affected’ by the ‘Externalism’ strategies of a group of Sandinista women poets. ‘The externalist poets believed in using real life events and physical experiences in their poetry, instead of the imagery of the Imagination’ as, for them, ‘reality was more incredible than fantasy.’ ‘lnspired by this poetry of reality,’ Gittoes began his ‘first externalist drawings with charcoal, of soldiers at the frontline of the contra war.’[ii]

In 1995 he won The Blake Prize for Religious Art with his work entitled ‘The Preacher – Kibeho Massacre Series, Rwanda’ which ‘graphically portrays a Christian preacher, Bible in hand, giving words of comfort to those caught up in the fighting in East Africa in April 1995’. Gittoes had been on hand as part of his role as war artist with the Australian Military in mostly peace keeping roles. On returning from Rwanda, ‘Gittoes completed the work over one night as a summation of all the visual horror he had experienced in the midst of war’ commenting that, ‘With ‘The Preacher’, he represents what I think religion should do, raise people up, make people feel human and spiritually alive and give them courage and faith.’ He has also said, ‘this is what religion means to me,’ it is ‘being aware of modem problems, and applying Christianity to the situation’; it is ‘the Bible being re-enacted in the present day.’[iii] 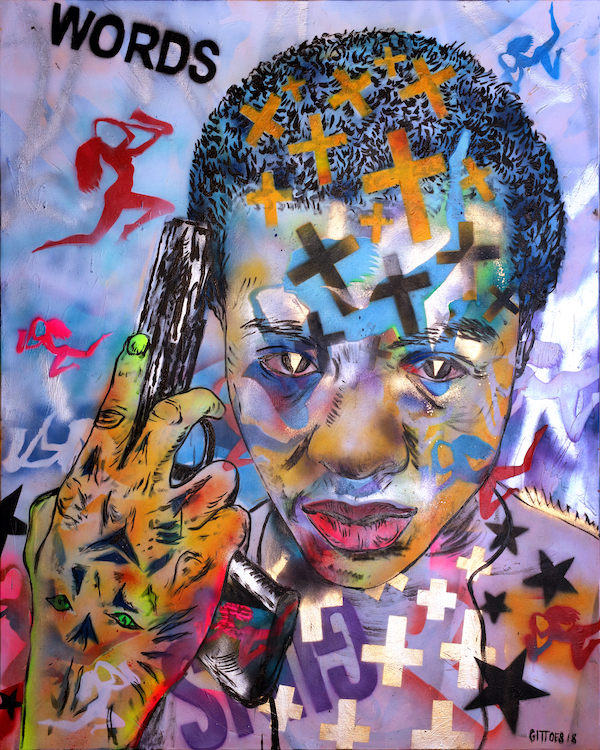 ‘White Light’ takes us into a similar place as, with the support of Rev Jesse Jackson, the Roman Catholic priest Fr Michael Pfleger leads a demonstration that shuts down a stretch of the Dan Ryan Express Highway in Chicago to make the point that enough is enough when it comes to gun violence. In Englewood, statistics on gun violence are higher than any active armed conflict, leading locals to dub the area ‘Chi-Raq’. In this urban war zone, young people are the frequent targets, decimating families and fracturing the community. Installing himself within a local gang, Gittoes traces how racial segregation, high unemployment and ready access to firearms combine to contribute to a cycle of gun crime. Rather than surrender to violence, however, shooting survivors and community leaders, like Pfleger, aim to turn the tide through music and local collective action.

Through his work, Gittoes invites us to understand what it is like to be there, even daring to create, in some of the most dangerous places in the world. He wants the viewer to experience the conditions, situations and ethical dilemmas that he himself encounters in being there and invites us to examine our own cultural fears of what it is like to be over there, in places that only appear in our evening news in the context of global terrorism or violence. George Gittoes: on being there gives privileged access to his process through his personal visual diaries, field drawings, photography and film. Through these forms, we experience an amazing human journey that holds out the hopeful power of creativity in the face of prejudice and fear. This is a magnificent visual record of how Gittoes not only survives but creates in the face of forces that would seek to repress the human imagination.

Gittoes has learned that documenting frontline action is not enough; he wants to use art to bring about change. He wants, as Pattenden writes, ‘to pull us into these narratives and for us to consider what matters most when we talk about what life means and the nature of survival and human thriving.’ As such, this exhibition ‘is a magnificent visual record of an imagination that provides a hopeful resource for the difficult times in which we live.’[iv]

George Gitteoes: On Being There | 24 April – 27 June, Casula Powerhouse

[i] Rod Pattenden, ‘Visceral Compassion: Images of War Artist George Gittoes’ in Centre for Studies in Religion, Literature and the Arts, 1998, p. 180.