An exhilarating multi-media deep dive into the New York punk scene of the late 70s and early 80s, “She Got Her TV Eye On Me” showcases the work of video artists, Pat Ivers and Emily Armstrong.

Ivers and Armstrong documented the downtown Manhattan cultural explosion in real-time as it played out in clubs and backrooms across the city. Their GoNightclubbing archive, part of the NYU Downtown Collection at Fales Library, is an unparalleled collection of hundreds of hours of live musical performances and interviews on video, thousands of photographs and hundreds of pages of ephemera. Challenged with presenting such an extensive collection, the exhibition explores Ivers and Armstrong’s work by focusing on two of their installations and their photography. The Video Lounge was commissioned in 1980 as an art project for the opening of the infamous nightlife destination, Danceteria, but soon became a permanent fixture, the first stand-alone media-centric element in a nightclub. 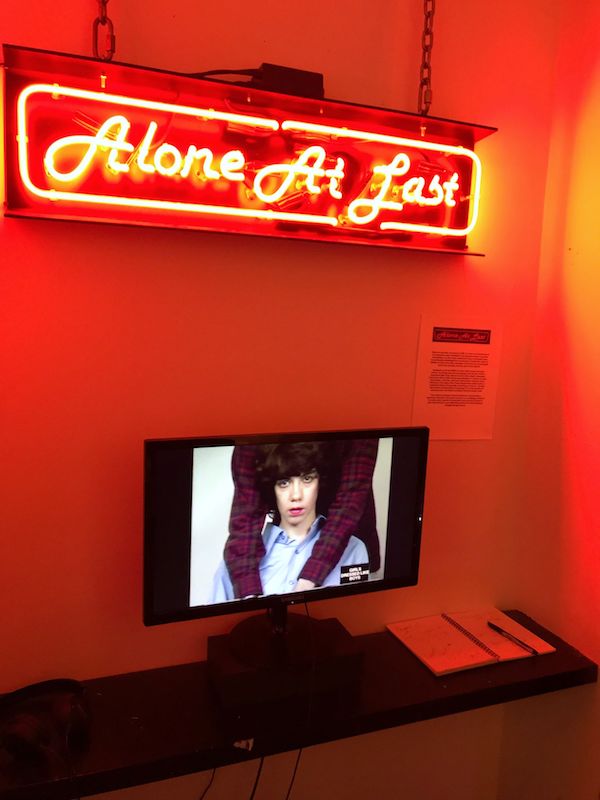 The recreation features a wood-panelled family rec room with a vintage, Mediterranean-style cabinet television set, invoking a time when broadcast TV was the only available option and then upends it. Emphasising the tension between context and content, the Video Lounge displays subversive content in a familiar setting — the family tv room — with a prescient programming style predating MTV and YouTube.

A mixtape of live videos of No Wave bands, a hippo battling a crocodile to a soundtrack by Suicide, a message from Queen Elizabeth and a Times Square Jumbotron video by Keith Haring all vie for the viewer’s attention and destroy the staid notions of what television should be. The exhibition celebrates the 39th anniversary of the October 1980 police raid that shut the original Video Lounge down. Behind a curtain, excerpts play from Ivers and Armstrong’s video installation, “Alone at Last” a sexy opportunity to be seduced by one of the 52 downtown denizens who try to woo the viewer for¬¬ lust or love. Exploring issues of gender and sexuality in the early ’80s, before AIDS decimated the creative community, “Alone At Last” explores the freedom of expression and pursuit of pleasure and fantasy at a time when traditional views of sexuality were being challenged and overturned. A who’s who of Downtown superstars are represented in a wall of photos of performers featured in GoNightclubbing’s live performance videos, music videos and intimate moments with Divine, the Cramps and the Dead Boys. Seducers from “Alone At Last” — including Hattie Hathaway, Haoui Montaug and Jaimie Davidovitch — are captured in portraits. And the staff of the original Danceteria are represented, too, including David Wojnarowicz, Keith Haring and Zoe Leonard.

The police raid that closed the club down was well-documented even as the staff was arrested and incarcerated overnight at the Tombs. The police weren’t interested in confiscating Armstrong’s camera, so their night in jail was immortalised on film. Pat Ivers and Emily Armstrong’s.