Last week I travelled South to the Guggenheim Bilbao for perhaps the strongest Summer line-up of art exhibitions, anywhere on the planet. Top This! Gerhard Richter’ Seascapes’, a selection of more than half of Richters coveted seascape paintings, displayed side by side.

This is followed by Lucio Fontana ‘On the Threshold’ an exhibition that has moved from the claustrophobic Metropolitan in New York to the open spaces of Frank Gehry’s monolithic masterpiece.

If this isn’t enough, ‘A Backwards Glance – Georgio Morandi And The Old Masters’ fuses the understated still lives of this seminal Italian painter with Spanish (Murillo, Velázquez, and Zurbarán) and French (Chardin) old masters.

Finally, Jenny Holzer displays her individual brand of Feminist text-based art in a large and comprehensive show of multi-media works. 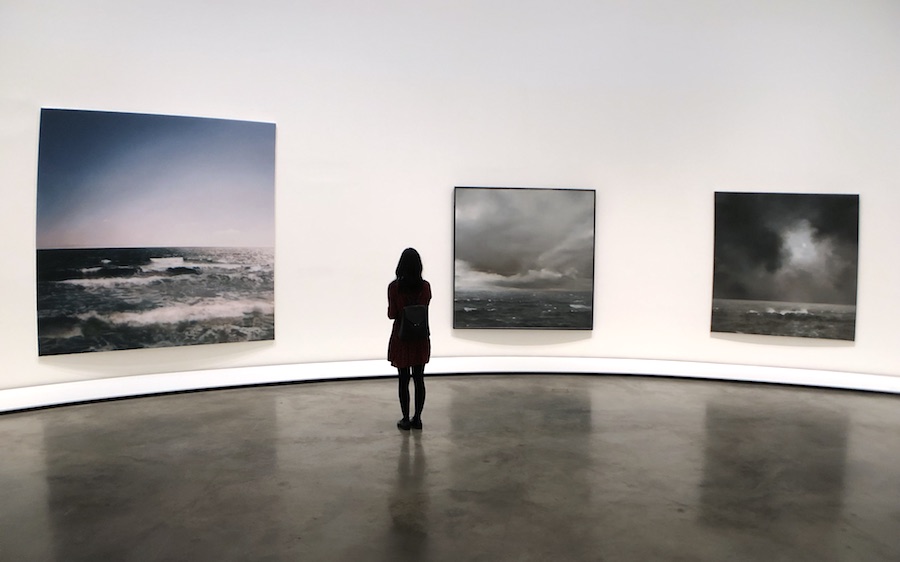 Gerhard Richter
On walking into the semicircular Gallery 304, you are confronted with a horizon line of Richter’s Caspar David Friedrich inspired photo-realist paintings. Richter confounds us with his ability to stretch our perceptions of the substance of his vision. Some of the works are further embellished by taking the sky and the sea from two different photographic images and combining them, which adds a further narrative twist to the image.

Born in Dresden in 1932, Gerhard Richter moved to West Germany from the East before the erection of the Berlin Wall. Settling in Dusseldorf, he had had the ‘Socialist Realist’ modes of his early education challenged by exposure to Fluxus’ anti-formalist ethos, and ‘Pop’ works by the likes of Lichtenstein and Warhol. In the 1960s, Richter had begun to use photographs as ready-made objects – often working from family snapshots but also appropriating media images –, creating realist ‘photo-paintings’ that simulated photography, but also converted the photographic into the painterly, the real into the hyper-real. Existing at the threshold of painting and photography, these works questioned the status of both media, examining the loss of painting’s public function in the light of photography’s usurpation of the recording process.

Richter was notable for being one of the first German artists to reflect on their then-recent national history, explicitly addressing National Socialism by painting the portraits of both those who had been members as well as victims of the Nazi party. Richter’s practice, however, is perhaps most remarkable for its diversity. Simultaneous to his realist photo works, he produced abstract paintings that were concerned (in his own words) with the ‘transcendental’ or ‘inexplicable’. And ultimately’. 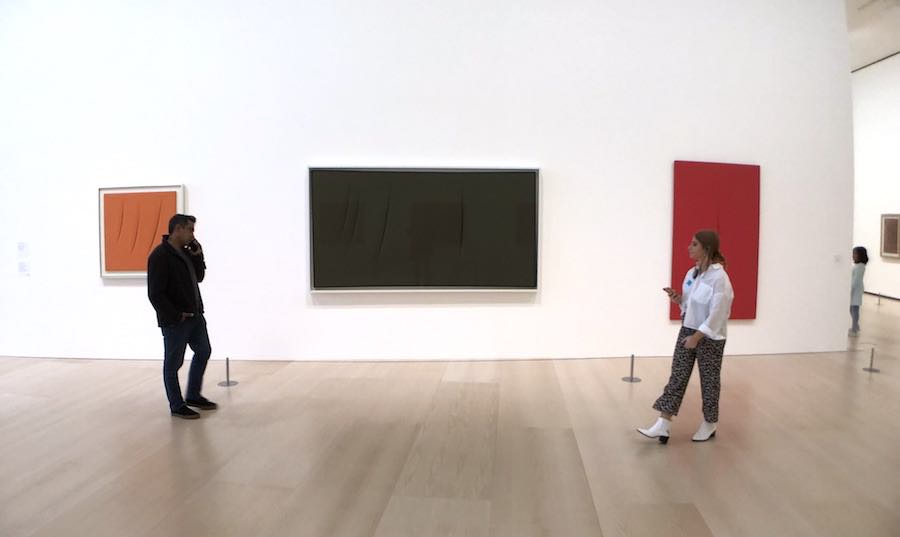 Lucio Fontana
Lucio Fontana ‘On the Threshold’ is another exhibition which opened last week. The curator Manuel Cirauqui has taken this exhibition from the Met in N.Y. and embellished it with more breathing space. The survey looks for the first time at Fontana’s love of clay and it is easy to see his progression from earlier figurative work to his trademark stabbing of the surface in his quest for gestural expression, which in some cases predates Jackson Pollock’s exploration of this genre.

The exhibition includes first-rate examples from his Cuts (Tagli) series and his earlier punctured Holes (Buchi) canvases. These works are radical, given the timeline. While his Spatial Environments (Ambienti spaziali) and experiments with light and space, and with neon tubes look as fresh today as contemporary work at the Venice Biennale.

Lucio Fontana (1899-1968) was born in Rosario de Santa Fé, Argentina and raised in Milan. He moved back to Argentina in 1922 where he worked as a sculptor in his father’s studio for several years. In 1926, he participated in the first exhibition of Nexus, a group of young local Argentinian artists. Returning to Milan in 1928, Fontana enrolled at the Accademia di Belle Arti di Brera. His first solo show was held at Galleria Il Milione in Milan in 1931. In 1935 he travelled to Paris and joined the Abstraction-Création group. The same year, he developed his skills in ceramics in Albisola, Italy and Sevres, France. In 1939, he joined Corrente, a Milan-based group of expressionist artists, while intensifying his collaborations with architects. In 1940, he moved back to Buenos Aires, where he founded the Academia de Altamira with some of his students in 1946, from which the Manifesto Blanco group emerged. He returned to Milan in 1947 and, together with a group of writers and philosophers, signed the Primo Manifesto dello Spazialismo. His first major international retrospective was held at the Solomon R. Guggenheim Museum in 1977. 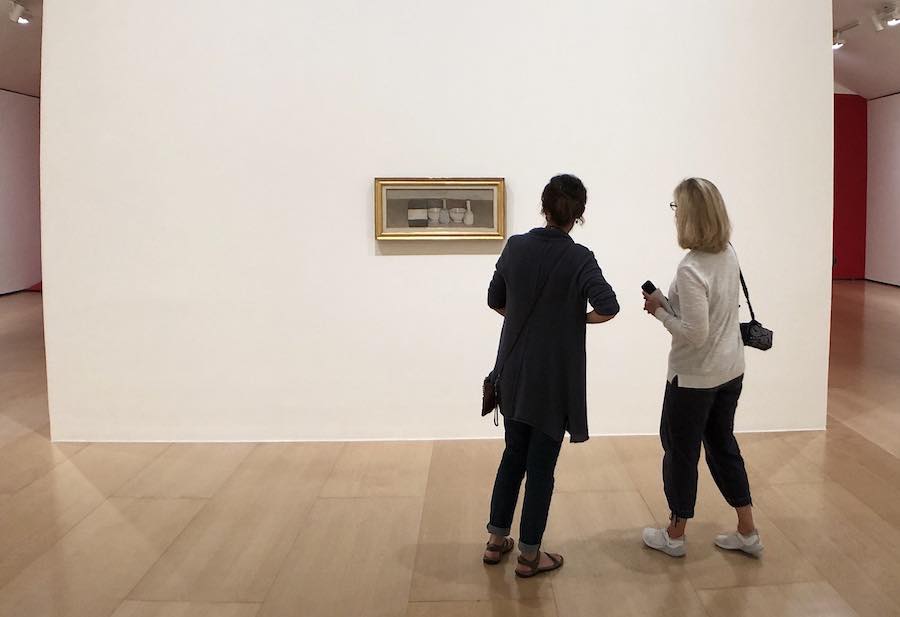 Georgio Morandi
From Fontana, we move to the Italian 20th-century still-life painter Georgio Morandi. This is not a small exhibition and includes several old master paintings including El Greco, Zurbarán and Chardin. Morandi spent much of his working life as a teacher and his formal approach is groundbreaking in its simplicity, reducing the subject matter of everyday objects to a composition of shape and form.

In 1920 Giorgio Morandi (b. 1890, Bologna; d. 1964) devoted himself to the study of objects (bottles, flower vases, boxes, tins) and landscapes. The artist rendered his subjects time and time again, arranging them in varying ways. Morandi focused on the infinite pictorial possibilities of these small, domestic items. His use of colour and light, reveal the artist’s pursuit of pure and concentrated forms.

Morandi studied at the Accademia di Belle Arti in Bologna, receiving his diploma in 1913. He studied the works of Paolo Uccello, Giotto and Masaccio in Florence and collected black and white reproductions of paintings he could not see at first hand, particularly those by Cézanne, Derain and Henri Rousseau. In 1912 he began to teach himself to etch, using old manuals, and the medium continued to be relevant to him throughout his career. Morandi exhibited with the Futurists in 1914 but was never influenced by their aesthetics or interested in their cultural agenda. The Metaphysical works of de Chirico and Carrà inspired him to create a small number of still lifes with groupings of mysterious objects, but by 1919 he had abandoned such compositions to pursue more formal qualities in his still lifes. Morandi participated in the Novecento exhibitions of 1926 and 1929, but his work had a higher affinity with the Strapaese movement, which was inspired by provincial cultural traditions. Morandi did not visit Paris until 1956 but was always well-informed about the aesthetic debates of his age. From 1930 until 1956 he held the Chair in Printmaking at the Accademia di Belle Arti in Bologna but continued to paint until his death. 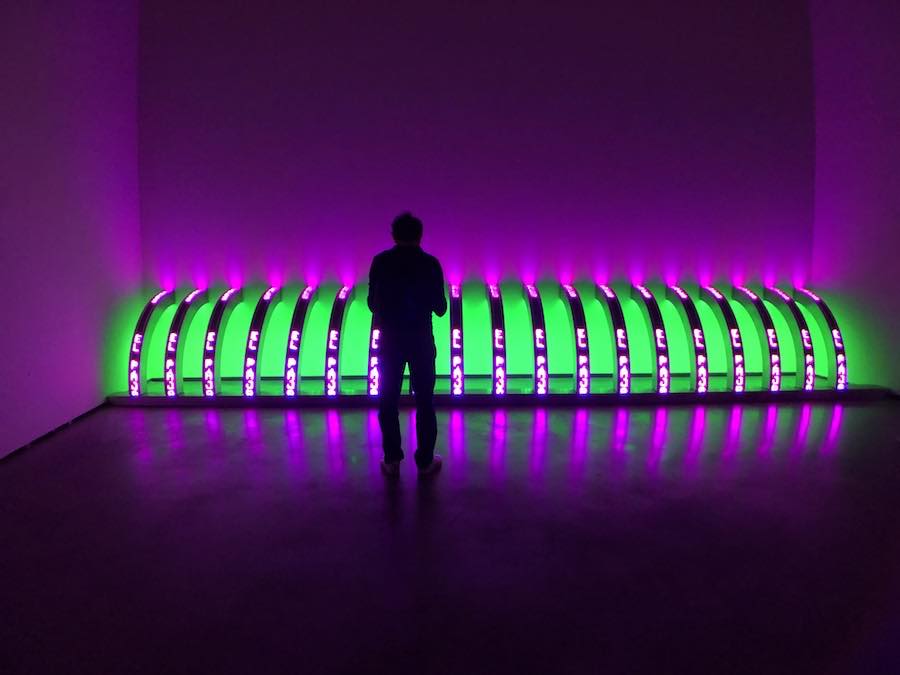 Jenny Holzer
The exhibition at the Guggenheim Museum Bilbao pays homage to Holzer’s prolific career, from the beginning in the mid-1970s, when her art debuted on the streets of New York to her late works challenging our perception of the news and fake news. Four decades later, her art, poetry, politics, and recent history converge pushes intellectual boundaries. Her profound works predate the attitudes of the ‘Me Too’ generation often taking on the form of installations in dialogue with the specific sites housing them. Another theme explored are her redacted paintings where text becomes pure visual form.

For more than thirty-five years, Jenny Holzer has presented her astringent ideas, arguments, and sorrows in public places and international exhibitions, including 7 World Trade Center, the Venice Biennale, the Guggenheim Museums in New York and Bilbao, and the Whitney Museum of American Art. Her medium, whether formulated as a T-shirt, a plaque, or a LED sign, is writing, and the public dimension is integral to the delivery of her work. Starting in the 1970s with the New York City posters, and continuing through her recent light projections on landscape and architecture, her practice has rivalled ignorance and violence with humour, kindness, and courage. Holzer received the Leone d’Oro at the Venice Biennale in 1990, the World Economic Forum’s Crystal Award in 1996, and the Barnard Medal of Distinction in 2011. She holds honorary degrees from Williams College, the Rhode Island School of Design, The New School, and Smith College. She lives and works in New York. The show covers an extensive period which reflects her position as one of the most influential and recognized artists worldwide, who has earned numerous distinctions and awards, such as the Golden Lion at the 1990 Venice Biennale.

If you plan to travel to an art destination this Summer, I would recommend a trip to the Guggenheim Bilbao to see this never to be repeated line-up.