For the last couple of weeks, people have been phoning and hounding me to see if they could get on the guestlist for “Hello Cunty: Stories from the Colony Club” the concept of which was so heavily ‘borrowed’ from my book that everyone thought I must be behind it -I had nothing to do with organising this event. So, if you want to go to any Colony Room shows in the future then speak to Clancy Gebler Davies she was on the club committee (the one that closed the club) and was serving pints behind a fake mahogany pub bar last night (it was said to be a replica of the Colony but couldn’t have been further from the truth if you tried).

The reception was full of the people who could have saved the club (YBAs like Tracey Emin) but were too busy wallowing in their fame/ egos/money/narcissism, but the majority of people were just under 30 – and never drank there. Of course, there were some interesting people there like Johnny Shand Kydd, who refused to help with our Tales from The Colony Room exhibition earlier on in the year (far too important to exhibit next to John Deakin – but obviously can’t get his head far enough up Sotheby’s arse). 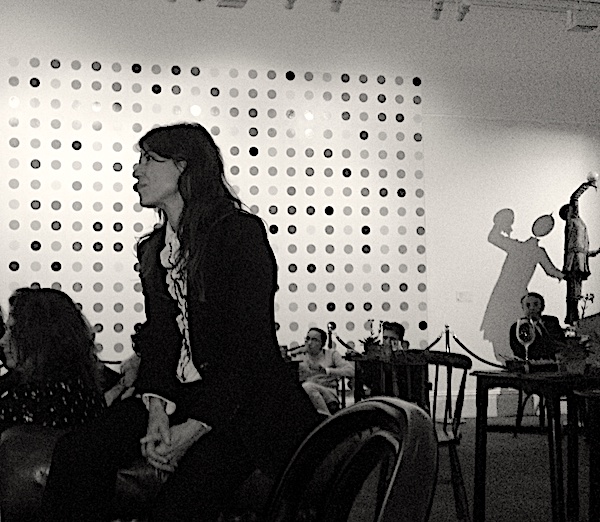 Shand Kydd spent the evening treading on people and getting in the way – like some demented Papp – who can smell the money (shades of Princess Di.) – photographing all the great and the good who never really drank in the club like the evening’s host, Norman Rosenthal (a horrendous teetotaller), Bella Freud, Oliver Barker etc. – in the hope of making a few quid, never bothering to photograph any interesting people like Geraldine Norman or Cathy Shakespeare Lane. As the discussion of the club got underway Johnny Shand Kydd kept interjecting and shouting out “Norman, tell us about Sensation!… But what about the Sensation exhibition?’ Like our f**king lives begin and end with the YBAs who were well represented at this soiree, no doubt promoting an upcoming auction.

The event was supposed to be about the Colony, not the Royal Academy. – Narcissistic pricks of the world unite… The whole event was a travesty of everything that the Colony stood for. Organised by people who thought they could just hire a fake pub bar (off the rack) and recreate one of the most special places in the world. Need I say more? Oh, Norman Rosenthal asked for any good memories/anecdotes about the club’s last proprietor, Michael Wojas, and Sophie Parkin took the microphone and went- on and on and on – about Michael Wojas being a drug addict and a thieving junkie who brought the club down. By this point, James Birch, Geraldine Norman and Cathy Shakespeare Lane walked out in protest but Clancy stoically remained behind the bar posing for photos and pulling pints in the fake mahogany pub bar with a shoddy colour photocopied sign (apparently nicked and reproduced from my website without my permission – Clancy’s hot on her own copyright – but possibly not others). Sophie Parkin, who is never backwards at coming forwards, then stood up again and said she knows what happened to all the artworks that disappeared after the club closed. So would all the artists out there (like Gavin Turk) who write to me bemoaning the ‘theft’ of their artworks when the club closed please instruct their lawyers and legal representatives to contact Sophie Parkin – she’s quite adamant that she knows where all your stuff is.

Darren Coffield’s Tales from the Colony Room is published in paperback on 24 June and is Hatchard’s non-fiction book of the month. 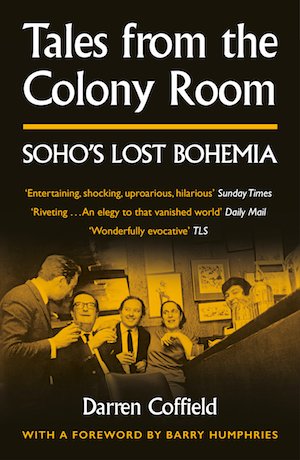 Darren Coffield’s book “Tales from the Colony: the Lost Bohemia of Bacon, Belcher and Board” is an authorised history of London’s most notorious arts club. The Colony Room Club was dominated, indeed created, by two personalities – its owner and founder, Muriel Belcher, a tough, sharp-tongued veteran of the Soho drinking club scene, who opened the Colony Room in 1949; and the artist Francis Bacon who was one of her first customers, and became Belcher’s co-conspirator when she paid him a retainer to bring in his rich pals. Ian Board served behind the bar at the Club for 46 years, first as Muriel’s barman and after her death as proprietor.

Imagine a tiny room, the size of a modest living room, at the top of an undistinguished staircase behind an anonymous door on Soho’s Dean Street. The walls were a distinctive but rather bilious green, and there was a bar at one end and a single unisex toilet at the other. Coffield describes it as a “theatre of hate” where the vituperative regulars gave as good as they got.

‘Every serious art historian, good or bad should read it, regardless of the artist or group of artists they are dealing with.’ Norman Rosenthal