For in its afterlife…the original undergoes a change – Walter Benjamin

In both post-Renaissance European painting and contemporary girly magazines a woman, Berger suggested, “has to survey everything she is and everything she does because how she appears to others, and ultimately how she appears to men, is of crucial importance for what is normally thought of as the success of her life.” Yet all images, he implied, are ambiguous because there are always alternative narratives, alternative stories. Other ways of seeing. Past and present coalesce in a turbulence of contradiction. 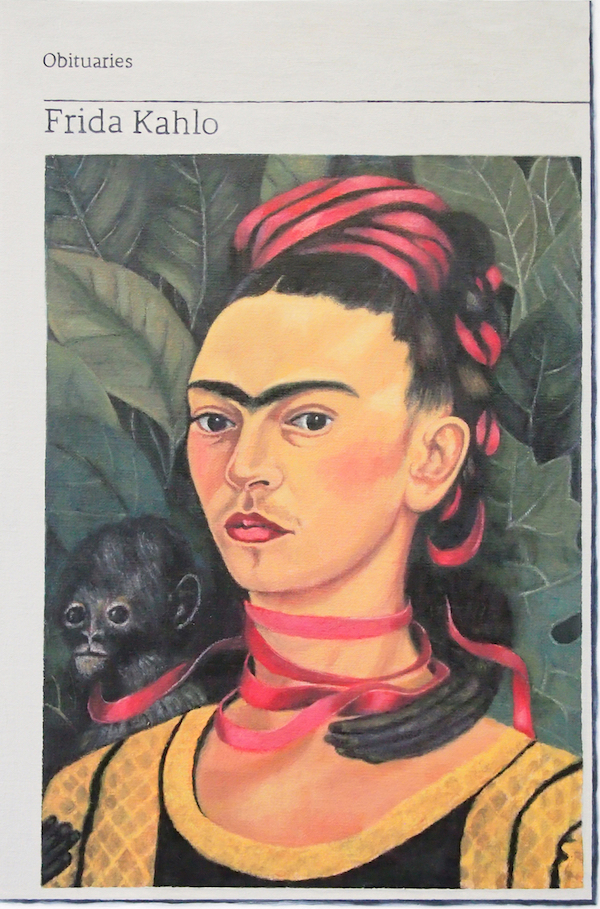 Imagine two mirrors facing each other. You stand in the middle and your image multiplies, becoming more and more distant from your original self. Each reflection is watched by those in the other mirrors, becoming further removed. Meaning is distorted, modified and gradually changed. As Walter Benjamin argued, in an age of pictorial reproduction, the initial reading of a painting or object is altered by the making of copies. It is within this prism of reflected meanings that Hugh Mendes has created his series of female self-portraits in the form of obituaries. These follow on from his recent show where the subjects were all men. After the death of his father, Mendes went back to art school to do an MA. He had been painting newspaper-based images since he graduated in 2001. The first was an iconic photograph of Princess Margaret by her, then, husband, Lord Snowden. Around this time, he also began to notice the often unconventional images used by The Independent newspaper in their obituaries. Until this point, he had been painting still lives. Now he was to move from natures mortes to painting death notices.

Pre-photography the only way for an artist to record their presence was through the self-portrait. For a female artist to paint herself, rather than be the subject of a male painter, was to take agency over the way she presented herself to the world. Within art history, it has all too often been stated that there were few women artists of real talent. Yet the structural sexism of art schools and academia actively contributed to the perpetuation of gender hierarchies. In this series, Hugh Mendes not only acknowledges female artists of exceptional talent from

Sofonisba Anguissola to Frida Kahlo but inverts the proprietorial ownership implicit in the male gaze into a complex conundrum. Here a contemporary male artist paints copies of historic female self-portraits taken from images reproduced in newspapers. In this hall of distorting mirrors, we are left with more questions than answers. Who is doing the looking? What is truth and what fiction? With whom does the narrative voice lie? If it is the case, as much feminist art history claims, that the male gaze bestowed on the female subject is a form of consumption and paternalism, how are we read this intricate interplay, or understand gender and (re)production when the images being produced are self-portraits by female artists of the far and near past, used by a contemporary male artist?

In his essay: The Task of the Translator, Walter Benjamin suggests that: “translatability is an essential quality of certain works, which is not to say that it is essential that they be translated; it means rather that a specific significance inherent in the original manifests itself in its translatability…by virtue of its translatability, the original is closely connected with the translation; in fact, this connection is all the closer since it is no longer of importance to the original.” It is this act of translation that lies at the heart of Hugh Mendes’ enterprise. As he stated when I visited him in his studio, “Art is an act of the imagination. What matters is to get into the headspace of my subjects.” In so doing he brings fresh expression to the way these images are read, and these women are reassessed in an era of the copy and social media.

He finds most of his images online, prints them out and makes a collage using the original newspaper typeface. The first were accurate transcriptions of the source image but, more recently, he has begun to make them up. All his subjects are of personal significance to him. He tries to give a strong sense of the person. He looks at their notebooks, watches videos, and attempts to create dialogues. The original newsprint obituaries are flimsy and ephemeral, but his careful, studious paintings become a form reincarnation where the impermanent becomes permanent, the transitory ossifies into a lasting memento mori.

Hugh Mendes is a great craftsman and a teacher at the City and Guilds Art School. He knows about colour theory and how to draw. His academic prowess is visible throughout this project. It is not simply a question of making copies. These paintings are not taken from life but from a flat photo, already at one remove from the subject. He subtly alludes to and understands the different styles and techniques, how each artist used colour, while making the work recognisably his own.

Stand in front of these paintings and the subjects all make eye contact with the viewer, challenging assumptions about the self-portrait, the role of women in art and our understanding of the copy. In this hall of mirrors, truth becomes many-layered, a complex palimpsest of meanings where the ephemeral is rendered permanent. Through this transformative process of looking, these women artists are not only returned to themselves but create a haunting discourse on gender, history and reproduction.

Sue Hubbard is an award-winning poet, novelist and freelance critic. Her latest novel Rainsongs is published by Duckworth. Her fourth poetry collection is due from Salmon Press, Ireland.