A New Year, a new decade – I’ve been thinking about all the things I currently don’t like about the contemporary art scene here in Britain. Most of all, I don’t like its pervasive self-righteousness, the ever-increasing assumption that ‘official art’ has all the answers.

It must support minorities. It must do full justice to women, and (most of all) it must make up for the injustices done in the past to artists from both these categories. A great deal of time and effort is currently being spent in trying to rewrite art history, to persuade today’s public that the Pre=Raphaelite Movement was rich in women artists who have unjustly been erased and that Artemisia Gentileschi was the equal of Caravaggio. Both these propositions are untrue. You may deplore the lack of creative opportunities for women artists in the past, but you can’t change history. The story of Western art offers no till-now mysteriously forgotten Raphaellas or Michelangelas, ready to be exhumed and adored. The real job is to see that major women artists get full credit for the work they are producing right now, when social attitudes have changed. Hello, Judy Chicago! Hello, Bridget Riley! 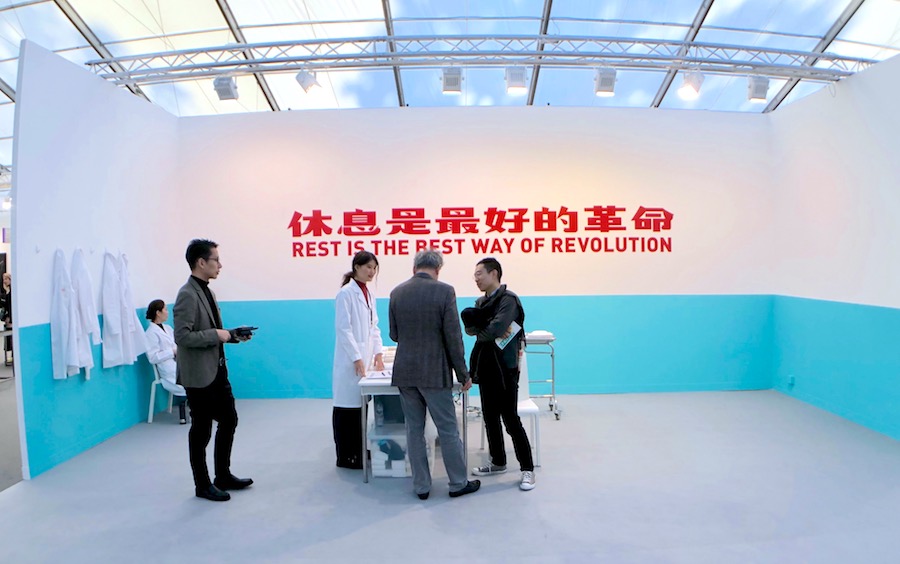 Exploration of today’s art also needs to admit that the world of contemporary art has become plural – there is no longer one central, generically Western tradition. There is Chinese art, with a continuous tradition that stretches back to the Shang Dynasty c. 1500 BC.

There is Japanese art. There is Russian art, which looks back beyond the Bolshevik Revolution to the socially conscious art of the late 19th century Wanderers, with their touring exhibitions, designed to reach out beyond the two hubs of Moscow at St Petersburg. There is the art now being produced in Turkey and Iran, which resonates in different ways to Islamic tradition. There is the tumultuous art of modern Latin America. In some of these spheres – Latin America in particular – women artists played a leading role much earlier than they did in Europe. Here in Britain, there is a lazy tendency to define ‘ethnic minority’ art as being essentially a product of artists of African descent, more especially of those affected in one way or another by the story of European colonialism. British official attitudes to artists who can be placed in this category aim to be nurturing – to make up for undoubted historical wrongs – but often end up by being patronising.

The real reason for writing this, however, is not simply to complain about official attitudes to contemporary art in Britain – the complacent assumption that they’ve got it sorted, that everything is for the best in the best of all possible worlds – but because of fears about the future. Since the supposedly halcyon days of the YBAs – Young British Artists – in the 1990s, there seems to have been no real development. At the end of the decade, there was, it is true, another new art movement, also British, and much more influential internationally than its predecessor, though largely ignored and derided in its place of origin. This was Stuckism. Anyone who doubts the extent of its influence should go to the web-site www.stuckism.com and count the number of Stuckist groups that exist elsewhere, particularly in Eastern Europe. As its name implies, Stuckism is firmly retrograde, even more so than Pre-Raphaelitism was in the context of the 19th century. In Britain, its most prominent surviving exponent is Joe Machine, self-trained as were many leading British artists before him in the past. Joe Machine’s chief alliance in his own country is with the London Magazine, Britain’s oldest and grandest literary periodical, which occupies a very different position in British culture from that held by the mandarins and mandarin-esses of the Arts Council and the two London Tates.

What this account has so far left out, and it is a very major omission, is the impact of technology on contemporary art. The Turner Prize has dabbled in this. In 2018, all the short-listed artists were makers of videos. The prize-winner was a Scottish female artist, who offered videos made on her iPhone. She also made a small, unheralded appearance at the 2019 Venice Biennale, but received little notice in an event beleaguered by floods. Videos of the kind she offered look extremely unambitious when compared, for example, to the kind of digital work offered as a matter of course in the huge international universe of video games.

In 2019 all the four contenders for that year’s Turner Prize, in an exhibition held at the Turner Contemporary Gallery in Margate were makers of installations of various kinds, Installations have become popular in official British galleries as opposed to privately owned and spaces, because of their lack of commercial implications. An installation is essentially an artwork that exists for once occasion only. Once the exhibition featuring it is over, it is gone for good. An attempt may be made to revive it elsewhere, in a different space, but attempts of this sort are seldom convincing. Commercial implications are therefore blessedly absent or at any rate pretty subdued. The paradox is that the official bodies who are now leading patrons of contemporary art in Britain have come to dislike the idea of permanence. An artwork made to last has more chance of slipping from their control. In addition, those in control more and more wish to offer what they call ‘an experience’ – something that involves more than the sense of sight, but which plunges the visitor into a vortex of sensations. 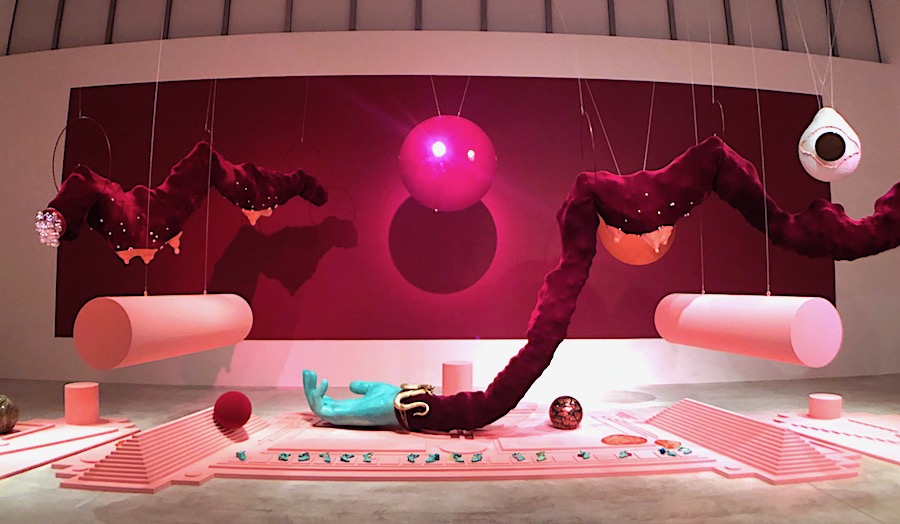 It is at this point that a comparison with the video games universe becomes fully relevant. Video games are, when fully developed, immersive, but the immersion does not necessarily happen in a single location. They happen wherever there are players equipped with the right equipment. They can be played, simultaneously, in locations all over the computer universe. Nor are the narratives they offer predictable. These differ according to the skill of each player. They are inherently competitive, which is part of their attraction. They differ radically in these respects from what was offered by the 2019 Turner Prize show. The visitor to the four environmental works on offer had to be there, on the spot to experience what they offered, which limited the number of people they could reach. Ostensibly populist, they were so only in a very limited fashion. More – the works on view did not respond to the spectator. Official art of this kind is made for the strictly obedient passive observer. Be present in the same space, but no horsing around, please.

This element was further stressed by the fact that the four artists selected for the Turner Prize show in Margate agreed not to compete with one another. The prize, they demanded, was to be divided equally between them. This, in a sense, amounted to telling the visitor: “Yes, come and look if you like, but your opinion, as well as that of the jury, doesn’t matter.” A Turner Prize presented on this basis loses most of its point. Do it once, and the four artists concerned are models of civic virtue. Do it twice, and the event will be well on the road to abolition, together with the surge of publicity for Arts Council art that goes with it. It won’t be the first time in history that official art has disappeared up its own fundament, victimised by righteousness.

What will, or may, replace the smug situation we have now? A Christmas Eve article in The Times offered an alarming possibility. Headlined: “Cyborg soldiers ‘will join the ranks by 2050’”, it began as follows: “Soldiers will have ‘cyborg’ modifications, including robotic eyeballs and brain implants enabling telepathic communication by 2050, experts claim.”

It continued as follows: “Across popular social and open-source media, literature and film, the idea of machines to enhance the physical condition of the human species has received a distorted and dystopian narrative in the name of entertainment.” 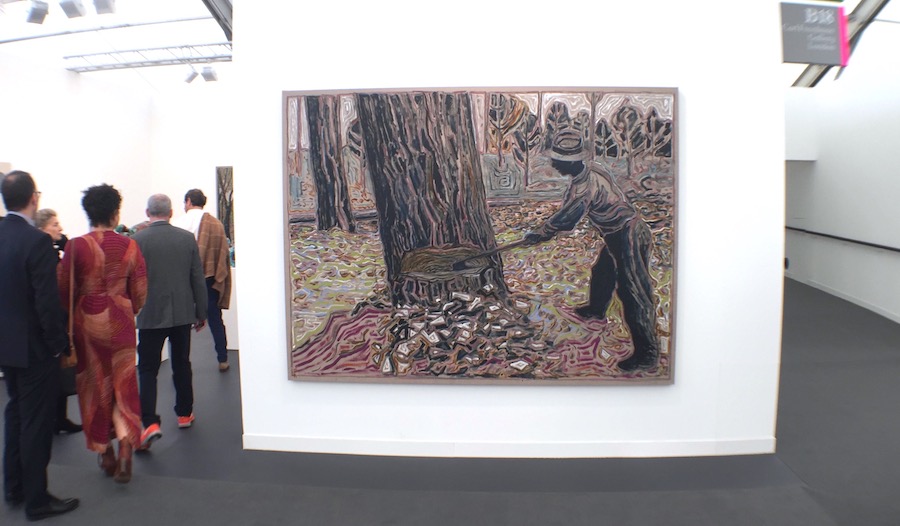 If this already exists in the world of popular entertainment and is soon coming to us in modern warfare, it is also very likely to manifest itself in the so-called visual arts. The questions concerning race, sex and gender that now preoccupy British art will become irrelevant. Mama Tate and Daddy Arts Council will be gathering dust on some shelf. Cyborgs, suitably modified, will be re-acting creatively on and with other cyborgs. You, members of the audience, will also be modified to participate. In its present impasse, radical technological innovation seems to be the only route the contemporary art can take. Right now, technology is developing dazzlingly fast.

Official art, on the other hand, is ‘Stuck, stuck, stuck!’ as Tracey Emin yelled long ago at her then-boyfriend Billy Childish. Billy, as it happens, rapidly abandoned Stuckism for a figurative style based on the work of the Norwegian Early Modernist Edvard Munch (1863-1944), who is now universally famous as the painter of The Scream. He made a wise choice and has a solidly impressive body of work to his credit. Billy would make a good subject for the Tate Britain retrospective he has yet to receive. He is also known as a poet and as a musician. The one problem, however, is that his work in the visual arts tends to look backward rather than forward.

Despite eager promotion of female and/or ethnic minority artists, there is at the moment little sign of real innovation in British art. In official galleries, it has been replaced by complacent patronage of good causes. The current show in the main space at Tate Britain comprises 3128 class photographs of Year 3 students from schools in and near London. Inclusive, yes. An art exhibition? – no, not really. Virtue- signalling gestures of this kind tend to offer little or no aesthetic content. Many of the images are placed too high up to be seen in any detail. It is enough to know that they are present. If this tickles your sense of social virtue, by all means, go. If it doesn’t, don’t bother.