Ibrahim Mahama came to international attention for his monumental installation of jute sacks at the Venice Biennale in 2015, a powerful way to reference how only £2bn of the £15bn market value of Ghana’s cocoa production, largely transported in such sacks, flows into the country. But that represents just one strand of his hugely ambitious, socially engaged practice, for which he acquires all manner of objects – and even buildings – in order to tap into their histories. I caught up with him at the opening of his show ‘Lazarus’ (15 September – 7 November 2021 at White Cube Bermondsey). 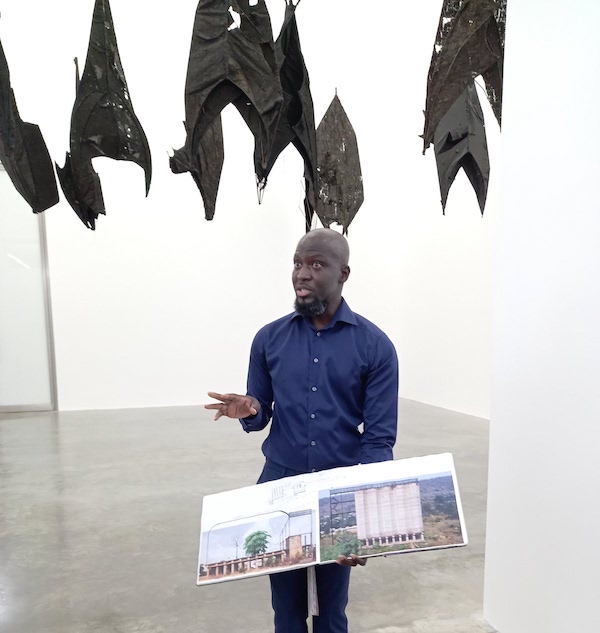 Ibrahim Mahama explains his process using his notebooks with images of silos, in front of ‘Lazarus’, 2021

PCK: Is that the biblical Lazarus who rose from the dead?

IM: Yes, the ‘Lazarus Effect’ is collecting remnants from the past to reinterpret them, to make them live again.

PCK: That includes Nkrumah Voli-ni, an uncompleted grain silo in the northern city of Tamale, where you live and work. How come?

IM: I’ve been researching the post-independence infrastructure in Ghana, buildings which were abandoned in 1966 when our first president, Kwame Nkrumah, was overthrown in a military coup d’état. They were part of a socialist programme to make Ghana self-sufficient, but the subsequent regimes have wanted nothing to do with his legacy, so the buildings were never finished – even though that would have made economic sense. It was said that the silos, being built by Soviet architects, weren’t suited to the climate and even that Nkrumah Voli-ni was going to be a prison. It had been abandoned for sixty years, but I asked myself the question: if you can’t use it to store cocoa or maise, why can’t you make another use of it?

PCK: What will you do with the silo?

IM: I’m trying to bring the building back to life – not to be as it was, as in the 60’s we didn’t have the same environmental concerns that we have today, but using it in an ecological way – as a greenhouse. When I bought it, the occupants were bats, and I wanted the bats to be co-inhabitants. The pandemic was starting, and bats were being blamed for starting the virus – but, if anything, these species have not endangered mankind. Mankind has endangered every other species on the planet. So I’m interested in the whole ecological system around the bats and what they symbolise. 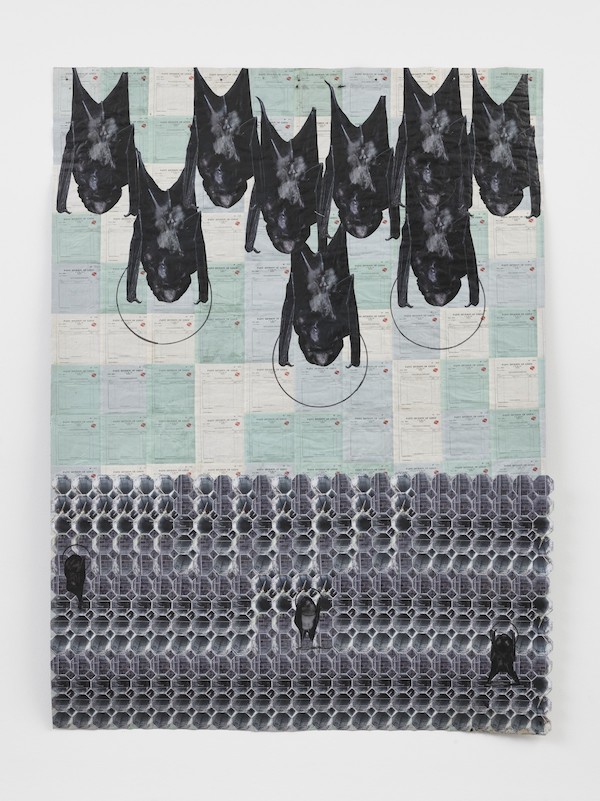 PCK: Appropriately, then, bats appear in the hanging sculptural installation ‘Lazarus’ (2021). What is that made from?

IM: I am working with armatures from old buildings and pulling them together to create this gesture of the bats by combining them with tarpaulins of the sort traditionally used to cover goods which are being transported internationally. They’re dark and oil-drenched from contact with engines, so it almost looks as if oil has spilt into the ocean and killed whales. The show also has collages, which combine photos of the bats in the building with documents like receipts from Ghanaian companies.

The most striking – and noisiest – work is ‘Capital Corpses’ (2019-21), which  consists of 100 sewing machines on school desks, operating in syncopated bursts, and blackboards still showing the last lessons taught with them. What is that about?

IM: I like the simple idea of combining the classroom with these machines, typically used by young women who, lacking a formal education, get a sewing machine as their means to keep a family. I’m interested in the contradiction between what the machines and the desks signify.

PCK: How do you acquire so much old stuff?

IM: I often negotiate to replace old for new, added to which there are many scavengers in Ghana, so if I need anything, I just commission them to go around. The desks are a colonial design by British, and I like it that kids always write on them. I was less interested in the sewing machines as formal objects than in the sound connected to them – but they didn’t work. Often in Ghana, people will buy second-hand clothing without worrying if it will fit or not because we always have a tailor available. So I worked with tailors, switching them from using the machines to repairing them. When they came back on, it was another return of the dead.

PCK: You’re just finishing your PhD. What is your subject?

IM: It is based on the project to resurrect buildings around the country – old swimming pools and cemeteries as well as silos. I look into the political forms behind the spaces – Marxist theories of capital and the contradictions posed – and aim to translate them into another kind of system that allows for hope to be bred within a new generation.

PCK: What do people make of you back home?

They are surprised that I consider myself an artist, given the sorts of things I do, but I think that is an important part of leading them into new perspectives.

PCK: You come from a large polygamous family. Can you tell me about that?

IM: My father has four wives and they have ten children, but there are many adopted children, too – more than I can count, you always came across different people in the house. Relations with my mother and the other wives are very similar: the only reason you can marry more than one wife is because you are deemed to be very responsible. Everything is equally shared, and sometimes wives will give children to each other to raise. I don’t know if my practice would have developed in the same way if I didn’t have that background – even though my work doesn’t deal with my family, the spirit of it makes a difference.