The National Gallery was hoping to open a re-arranged immersive digital experience inspired by Jan Gossaert’s 16th-century masterpiece ‘The Adoration of the Kings’, on 6 January but due to the COVID Pandemic, this is looking increasingly unlikely and it will now have to take the form of an experienced in the comfort of your own home.

This experience begins with the African king Balthasar’s voice, setting the scene for the journey into this painting. Balthasar is one of the three Kings who travelled to Bethlehem to visit the newborn Jesus bringing gifts of gold, frankincense and myrrh. He is Black, reflecting the resurgence by around 1500 of a tradition – dating back to the early days of Christianity – of including an African king. 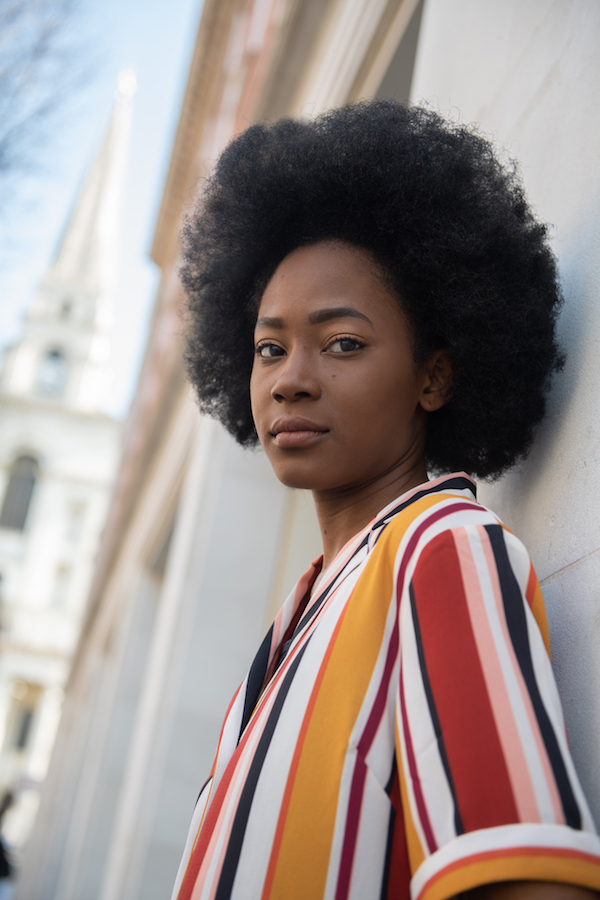 The Three Kings were often represented as rulers of each of the major parts of the world known at the time, Europe, Asia and Africa, emphasising the global reach of the Christian religion. We don’t know the exact reason for the resurgence of this tradition, but it is likely that a significant factor was the growing presence of Black people in Europe at that time, most of whom were enslaved.

Balthasar, this black Magus figure in the Nativity scene, was part of theologian Robert Beckford’s upbringing: ‘As a child,’ he has said, ‘the nativity scene always excited me. Not just because its appearance meant the closeness of Christmas presents, but because of the return of the black Magus.’ This response can be contrasted with the poem the National Gallery has commissioned from British-Nigerian writer Theresa Lola, which explores Balthasar’s experience of this transformative moment in time. Lola imagines him dwelling on how different, how self-conscious he feels. “The ground seems to be opening its teeth, either to bite or to kiss me – my eyes feel foreign. I guess to know deeply; one must look deeply.”

Lola’s poem understands that Balthasar has been inserted into the story because it has been given an entirely white European perspective which reverses its original significance but which has become the default understanding. In Gossaert’s painting, we have a white European Christ-child and his mother being visited a black man, rather than the reverse, which is actually more historically accurate.

Before Christmas, on the BBC World Service in a programme entitled ‘Black Jesus’, Beckford explored the impact Black Theology has had in raising awareness of these rejections, the implications for the church and whether seeing Jesus as black is having a revival due to the influence of black lives matter. In the programme, this realisation came home most forcefully when Chine McDonald says, ‘When I pray I see a white man – that’s problematic’. It’s problematic because, as Beckford notes, ‘Jesus is a man of colour from the ancient near east’; an olive-skinned Palestinian, not a blonde European.

If Jesus was a darker-skinned Palestinian rather than a blonde European, we need to ask, as Beckford does, if ‘Jesus is a man of colour from the ancient near east’, how then ‘did we make him an Aryan and use that image to oppress other people?’ ‘Faith doesn’t stand outside politics,’ Beckford notes, ‘In fact, it is a political move to separate the two.’ The problematic nature of this can be seen in the reality that, even today, a black woman like Chine McDonald still pictures a white man when she prays, even though this is a reverse of the image of God found in Jesus.

Other diversities may also have been obscured through the dominating perspectives of white European men. You’ll probably have heard the joke that, “Three Wise Women would have asked directions, arrived on time, helped deliver the baby, swept the stable, made a casserole and brought practical gifts.” Matthew’s Gospel does not actually ascribe number, gender or royal status to the Magi – the Wise Ones – from the East. The word Magoi meant Persian priest in Jesus’ time. The traditional number three was deduced from the three gifts of gold, frankincense and myrrh, and the idea that the Magi were kings didn’t appear until the fifth century from a bible scholar in Gaul. The names, Melchior, Balthazar and Gaspar, don’t appear in Western Christianity before the 8th century. Eastern Christians’ tradition holds that 12 magi were travelling in a caravan. Some Eastern traditions give the magi names but not those three names. Matthew’s use of the Greek masculine plural Magoi for Magi can be used inclusively, just as the English word “men” often includes women.

Matthew’s account of the story of the Magi draws on three Old Testament passages meaning that the story of the Magi would have been very familiar to the Jews in the first century as it would have sounded like a “remake” of old stories they had heard many times before. First is the story of Balaam in Numbers 22–24. Just as Balak, King of Moab, tried to hinder Israel’s flight and inheriting of the Promised Land under Moses, so Herod desired to kill the Messiah-deliverer who would bring redemption to Israel. Furthermore, as the pagan seer Balaam (referred to as a Magos by the first-century Jewish theologian Philo) was Balak’s intended instrument of destruction for Israel, so are the Magi, albeit unwittingly, instruments of Herod’s wrath against Jesus. 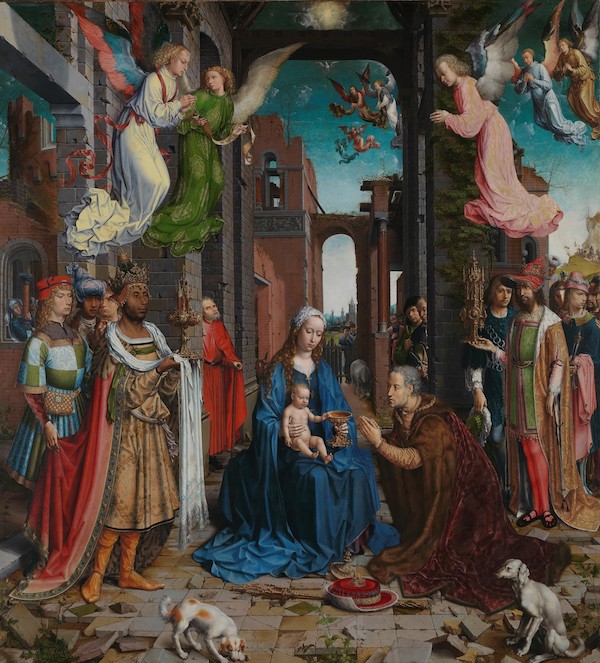 Jan Gossaert (Jean Gossart) The Adoration of the Kings, 1510-15 © The National Gallery, London

Second, Matthew’s story of the magi also corresponds to a pilgrimage of the nations to Israel prophesied by Isaiah. In the passage full of hope that was our Old Testament reading (Isaiah 60: 1-6), Isaiah says, “And nations shall come to your light, and kings to the brightness of your rising. Lift up your eyes all around, and see; they all gather together, they come to you; your sons shall come from afar, and your daughters shall be carried on the hip. Then you shall see and be radiant; your heart shall thrill and exult, because the abundance of the sea shall be turned to you.

A multitude of camels shall cover you, the young camels of Midian and Ephah; all those from Sheba shall come. They shall bring gold and frankincense, and shall bring good news, the praises of the LORD”.

Third, 1 Kings 10:1-29 narrates the visit of the queen of Sheba to King Solomon with gifts of gold and spices such as myrrh and frankincense. The background story of the queen of Sheba with her quest for Israelite royal wisdom, her reverent awe, and her three gifts fit for a king provides a reason to think of the presence of one or more women among the magi as a possibility. This can be combined with the Hebrew tradition of personifying wisdom as a woman and with the cultural tradition in the Middle East that it would have been inconceivable for men to be in the presence of a woman without the presence of other women. Joseph is conspicuously absent when the Magi visit, which is surprising since Matthew’s infancy account narrates events from the point of view of Joseph. Additionally, the phrase “the child and his mother” is used five times in the narrative. This all suggests that the presence of Jesus’ mother Mary without Joseph may be a statement of the presence of a woman among the Magi at the time of their visit.

The Magi’s visit is often called the Gentile Christmas; the overriding message being that learned, wise foreigners — the ultimate “outsiders” for Matthew’s Jewish-Christian audience — came to pay homage to a newborn ruler, Jesus Christ, whose spiritual power and wisdom surpassed their own. While that may have been Matthew’s intent, we have come to picture his story in a way that is opposite to that intent. As a result of the power of Medieval and Renaissance images and interpretations, we see a white Christ-child visited by a black King.

We need those like Beckford, McDonald, and biblical scholars like the Rev. Benedict Thomas Viviano, who developed the theory that there were both men and women among the Magi, to arrive at a more historically accurate and theologically significant picture and understanding of the Magi’s visitation which involves an inclusive group of Magi visiting a black Christ.

When Isaiah tells of nations coming to the light of the one that we know as the Christ-child, we can picture all people of all nations drawn to a Christ who knows oppression on all levels. Christ was born under the oppression of Roman rule, escaped genocide by becoming a refugee and lived, as a migrant, in another country. All this is obscured if we picture Christ as being one with the white European oppressors, but a Christ who, through his black identity, is seen to be one with the oppressed enables Christianity to be seen for what it originally was; a religion of liberation.

The incarnation and this ‘Gentile Christmas’ reveal that God’s heart is on the edge of human society, with those who have been excluded or rejected or ignored; that God is most evidently encountered among those in the margins and on the edge. Those who have been rejected are seen to be the energy and the life-force that will transform us all. The life of the church is, therefore, as Sam Wells, Vicar of St Martin-in-the-Fields, has noted, to be one of continually recognising the sin of how much we have rejected, and celebrating the grace that God gives us back what we once rejected to become the cornerstone of our lives.

Gossaert’s ‘Adoration of the Kings’ doesn’t return us to the heart of what was rejected. The National Gallery’s ‘Sensing the Unseen: Step into Gossaert’s ‘Adoration” experience helps us identify the problem but doesn’t quite return us there either. It is only with Beckford’s ‘Black Jesus’ that we are returned to an inclusive group of Magi visiting a black Christ and the full revelation that God is most evidently encountered among those on the edge. We would do well to join the wise ones in their experience of adoring the black Jesus and wait a while there; after all it’s been quite a journey to arrive at that place.

Gossaert’s The Adoration of the Kings View Here