On that Friday afternoon, the sun was a giant spotlight shining down North Parade; up-lighting the silhouette of pedestrians queuing for fresh sourdough, bags of figs and purple sprouting broccoli outside 2 North Parade Produce. Through the window of Meakin + Parsons Gallery opposite, sunbeams illuminated a quad of brightly coloured works on paper, float mounted in white frames; a mosaic of circles in ochre, cyan and magenta dancing on joyous grounds of pink, violet and cerulean. They reminded me of nautical flags; insignias from an alternative reality that might herald a new wave.

These works, by the London based artist Dominic Beattie, are entitled Glyph – a term that broadly means any kind of purposeful mark, such as a vertical line incised on a building, or a carved symbol.  Admired for his fluent handling of colour, developed in patterns across a wide range of media, these paintings suggest a kind of shift for the artist, from hard edge into a more freeform, elliptical style. It is this memory, of walking towards Beattie’s works on a sunny afternoon, that first springs to mind when I begin to write this article, in what seems like a completely different era. Right now, fingers hovering over my keyboard, I am thinking a lot about flags and purposeful marks. I am wondering how to frame this story of a fantastic new gallery collaborative in Oxford, that celebrates emerging talent alongside some of the best names in abstract art, without ignoring the heart wrenching live feed of current events, and our neighbour’s fight for freedom. What, if anything, can art do to help? 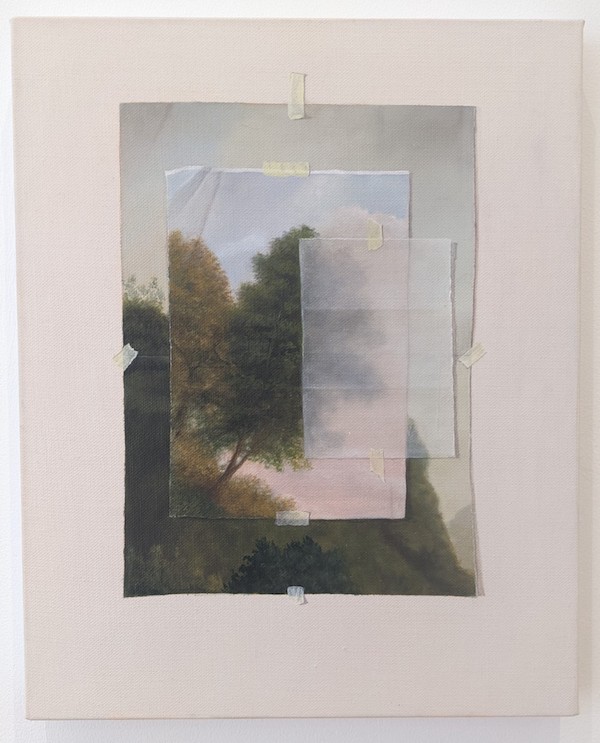 My mind recalls an image from its picture store, The Black Square, by Kazimir Malevich. Born in Kyiv (1879 – 1935), the Ukrainian avant-garde artist and theorist profoundly influenced the evolution of abstraction and expressionism in the last century. This work, which he painted three times, became known as the “zero point of painting” or “an uncrossable line between old art and new art” for how it drew a line between realism and  expressionism. Somehow, Malevich’s life mirrors the tumultuous decades following the October Revolution (1917): initially lauded for his supremely radical vision, the artist was eventually forced to quit his abstract enterprise, after imprisonment. His iconic (now cracked) Black Square was confiscated and hidden for 50 years under Stalin’s regime. Presently housed in the State Tretyakov Gallery in Moscow, his work foreshadows the terrible consequences of censorship and fake news.

It’s something we’ve taken for granted here in the west, our abundant freedom of expression and permission to speak truth to power. And yet, precisely because it is so euphorically on display in this bright new gallery, I am going to tell you this wonderful, heartwarming story. Not only is it an immense privilege to have something so upbeat, and inclusive open up to the public, but now, more than ever, we need to support the arts. So ‘Here We Go’ let’s talk about Meakin + Parsons and their inaugural exhibition at 16 North Parade, featuring Carl Anderson, Dominic Beattie, Christopher Brooks, Ham Darroch, Ann-Marie James, Jillian Knipe, Anna Liber Lewis, Zanny Mellor, Barbara Nicholls, Charley Peters, Bridget Riley, Toby Twiss, Robin Walden, Eleanor May Watson and Emily Wolfe..

Expanding on the success of their viewing room in West Oxfordshire, established in 2018 to exhibit Modern and Contemporary Art, this new iteration for the gallery sees the addition of a new partner: Hannah Payne of The Art Five. Under the leadership of Lucy Meakin, the business will offer an integrated advisory service, working with private clients to establish, high grade, and manage their collections, “a model that allows us to both think local and act global.” Meanwhile, Ben Parsons – also VIP Director of London Art Fair – will focus on the modern and contemporary programme, alongside the gallery’s strong secondary market activity and in on-going conversation with The Art Five.

In many ways this new gallery was born out of another kind of hardship: the pandemic. Locked out of galleries and confined to our homes, so many artists and art professionals lost access to the ecology that sustained them. “I said goodbye to everyone at work on a Friday and did not set foot in the gallery, or see my co-workers for another year,” says Payne. Not only did her former gallery remain closed during the initial lockdown, but there was little opportunity to go to private views and stay connected with her tribe. Formally trained as an artist, beginning at North Oxfordshire School of Art & Design School and completing her MA at Central St Martins, Payne belongs to a community of artists, curators and art dealers. “I really missed going to openings, where you would get five minutes with artists and find out what they were thinking about and working on. So I thought why don’t I just do an interview platform and make it a 5 minute read…  and just like that The Art 5 was born.” Characteristic of the flexible, adaptive and open minded attitude of the creative sector – think Matthew Burrows Artist Support Pledge, online viewing rooms, and Insta Lives – it was in finding another way to keep the conversation going that Hannah secured a future not only for herself as curator, but for the many artists she worked with. 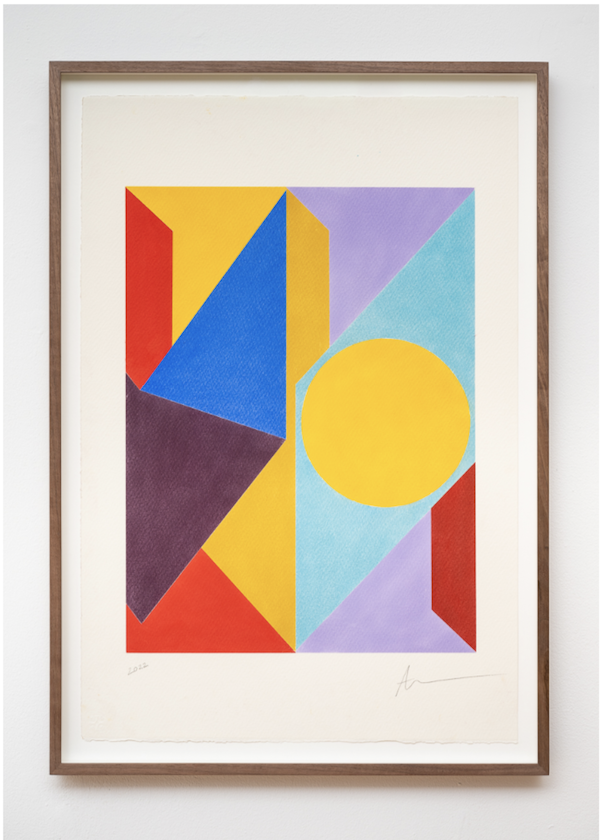 “Ben and I spent our lives commuting into London,” says Hannah. “It’s a regional gallery model that reflects the general post pandemic move out of city centres, and an openness to collaborate. I was working with unrepresented, unrecognised or emerging artists, in tandem to being on the Advisory Board of University of the Arts London’s Made in Arts London; before setting up his own gallery, Ben spent nearly 10 years as director of Karsten Schubert who represented some of the biggest names in contemporary art, in  particular Bridget Riley.”

We stop talking and look at the undulating ribbons of blue, red and pink on the wall. There is the unmistakable ripple of simultaneous contrast, Bridget Riley’s trinity signature of colours. Still working at 91, she is unequivocally Britain’s greatest living op artist. Singing in complement to Beattie’s works to the left, this limited edition print (yes, that means one might be able to afford it) had been placed in dialogue with the large Ham Darroch painting at the back of the gallery. Once studio assistant to Riley, Darroch has developed a distinctive style and practice of his own. Occupying a central position in the space, to me, this painting was like a giant badge of honour. I mean, how do you turn the simple combination of candy pink with warm caramel into such a well balanced composition with nothing but the hard edge of a zig zag? Also the largest work in the show, instead of overwhelming the other works, it somehow served to amplify their individual message. Charley Peters’ work looked alive with electricity and I was thrilled to discover the work of Anna Liber Lewis.

Importantly, whilst highlighting the work of ones-to-watch alongside established names, the space has not – as is often the case in regional spaces – been overhung. “We wanted to be really confident with the individual works, and not overcrowd the walls, but also keep a cosy, domestic feel to the space by including the seats and this coffee table. We want people to come in, discover the work, talk about what they love and become a part of our story.” In this spirit, Meakin + Parson’s gallery also includes an artist’s studio dedicated to a series of artist residencies which will be followed by solo shows. First up is Oxford-based Emily Wolfe, whose ethereal, multi-layered landscape paintings give voice to our environmental melancholia and question our connection with nature.

As Hannah is talking, my eyes wander back to the bright yellow sun at the centre of No Series 1, a pastel drawing that beautifully encapsulates the power of positive resistance, by embedding the letters ’N’ and ‘O’ into a delightfully balanced composition. A work that engages with the ‘me too’ debate by subtly questioning the politics of appropriation, it gives the viewer a new perspective on two very small, but important letters.  Sometimes, it is OK, and actually really beautiful to say ‘NO’, especially when someone is threatening to block out your light and turn your little

square of brightness into a dark nothing. And whilst there is little threat that this work might be confiscated, or the artist imprisoned for her stance, it celebrates the power of abstraction to express a uniquely personal and often inspiring point of view.

“In curating a very special line up of Bridget Riley works for the next show,” says Ben Parsons, “I am excited how our collaborative program with The Art Five gives us the chance to identify and position talent in the context of established artists, whilst highlighting how dynamic and far reaching the conversation between them, and us, can be.”

‘Here We Go’ will be followed by a series of solo exhibitions, the first being a Bridget Riley print show in March 2022. Go see it! – Nico Kos Earle Independent Curator/ Writer