Indian women artists working on walls, Ruchi Shah and Poornima Sukumar are changing their country, working in multiple cities in public and private spaces. Shah works with words and small businesses to transform foyers and workspaces. Sukumar is a muralist/activist.

Wall art in India. “It has existed for centuries – it is a part of local culture – Ruchi Shah

Women artists working on walls, Ruchi Shah and Poornima Sukumar are changing India, working in multiple cities in public and private spaces.
Shah works with words and small businesses to transform foyers and workspaces. Sukumar is a muralist/activist.

Recently Sukumar worked to transform the face of a landmark, iconic building in the Big Bazaar Street, Coimbatore, Tamil Nadu. Big Bazaar Street is one of the most historic roads of the city, and the building houses the district library and a small women and children’s library. Over the years the building had fallen out of popular use into what Sukumar describes as ‘a gentle slumber’.

As a step to revitalise interest Start India Foundation (with support from Asian Paints) and the local government of Coimbatore the Arvaani Project team to create an eye-catching and appropriate mural.

The Aaravani Project team led by Sukumar concentrated on people of the city as inspiration. ‘We were fascinated by the textile patterns and the colours of the city,’ said Poornima. The faces they took were not famous people but those they met on the street. And it wasn’t easy to work on one of the busiest roads of the city for twenty days straight without a break. 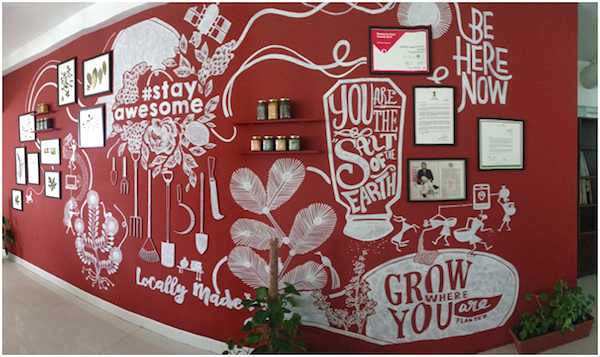 Shah works in interior design spaces but with similar high aspiration for the role of visual design. Through her commercially commissioned pieces for small and medium businesses she is part of a wider effort of young artists aiming to alter perceptions of work and life. Ideally, workers like Shah are intending that women and communal ideals are supported through design.
One of Shah’s strategies is to combine words and messages within her interior murals, creating informal poetry in a contemporary organic aesthetic. For other challenges, she goes deep into the technological delivery systems to repurpose elements. As in the display for Synup Technologies (Bangalore) which used muted pastel painted bottles adding her custom-designed labels, a time-consuming piece which ethically followed upcycling principles.

Shah is an analyser as well as an artist. An intelligent, applied artist. She looks at the companies she works for and unpicks their process. So her design reflects what is going on underneath the simple advertising of name, logo and mission statement. Fulfilling a commission for Cropin Technologies, an agri-tech company, she used a ‘RootTrace’ kit to map the journeys of five products and demystify smart farming. For Synup Technologies she created an entrance wall which represented what the company did for clients, ingeniously utilising the geometric light patterns to be a diamond-shaped grid for the product analysis. This explanation of what these new technology businesses are achieving becomes part of the company’s communications with their potential customers. By working with these new modern information companies Shah is assisting the economy in India to be led locally, crucial in resisting a new wave of colonisation in the virtual industries. An applied version of art assisting small corporations in challenging Western dominance rather than the anti-corporate protest art favoured by many left-wing European fine artists. 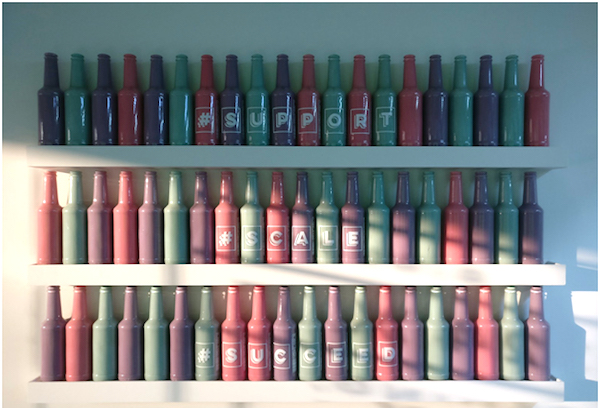 Shah points out that India is essentially an agricultural economy, with 70% of the population originating from this sector, and that crops, soil types and farming traditions have influenced tribal identities and different styles of folk art. For a more social space, taking a terracotta scheme to represent soil, she created a feature wall with a mix of Warli tribal art motifs, decorative trees and plants. She mixed these with farming tool cutouts. She brought these into an international contemporary new media context with quotes in English enhanced with sketches of satellites and smartphones, punctuated with frames for news items in which the company is featured. She took direct inspiration from a traditional Indian artform in the Warli paintings from Maharashtra, a tradition which represents nature and wildlife. Warli painting has recently been registered with a geographical indication under the intellectual property rights act, acknowledging how is has preserved special traditional knowledge and cultural intellectual property across generations.

Shah reflects on her place within the bigger picture of wall art in India. “It has existed since centuries – it is a part of local culture. Folk art predominantly occupies a space on walls of houses and temples in villages. Religion, deities, beliefs and symbols all find a space here. Overfilled cities, maintenance problems, drab walls and different social issues have motivated many young national and international artists to come and paint on walls in the different metros of India in an attempt to transform the space and mindset of local people. Colours, patterns, intricacy, social issues and vernacular languages influence most of the contemporary wall art in India.”