Jock McFadyen is late for our meeting in the Academicians Room at the RA. Very late. He was stuck on a bus. I’ve known him for more than 20 years and figure that if we don’t have time to talk now we can always meet up in his home in Bethnal Green where, for ages, a group of us met to watch films on a Friday night.

We’re here to discuss his selection as the overall coordinator of the 251st  RA Summer Exhibition. It’s an honour. A mark of having arrived in the hierarchy of the art world. But Jock is a maverick. Charming, mercurial, opinionated, witty, well read and a highly accomplished, original painter. A true Glaswegian, he has a wild streak. The RA may be in for a surprise. In Jock’s company sometimes you just have to hang in there for the ride.

“Well, I want to show art that describes the world”. He mentions our mutual friend Trevor Sutton. “He paints very beautiful abstract paintings but they’re based on landscapes in Ireland. That’s what I mean. They’re engaged but absolutely concerned with paint. I hope to include John Davies’ piece that was shown at the Turner Contemporary and work by Kenny Hunter. I can’t name all the artists yet as they haven’t confirmed. But I’m interested in texture and form. People think I’m a figurative artist but I see myself as an abstract painter, someone concerned first and foremost with paint.” 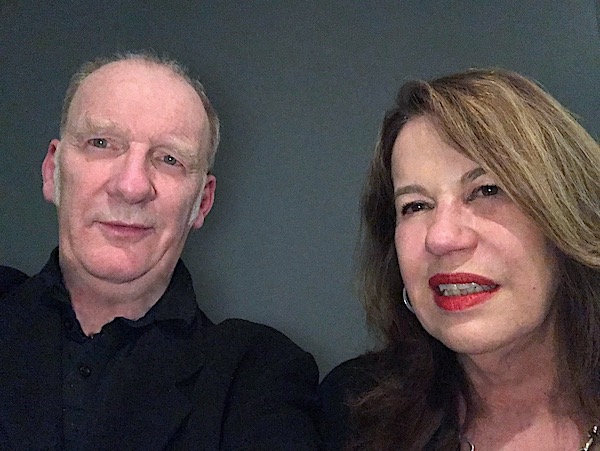 And what does he want the Summer Exhibition to look like? After all Michael Craig-Martin painted the walls pink. “Well I’m going to have a menagerie. There’s a tradition of animal painting from Stubbs to the more amateur cat paintings traditionally submitted to the RA summer show. Our interest in depicting animals goes back to our first image-making in caves. But the truth is that you don’t know what is going to be submitted and it’s a committee decision. This year’s committee is made up of: Stephen Chambers, Anne Desmet, Hughie O’Donoghue, Spencer de Grey, Timothy Hyman, Barbara Rae, Bob and Roberta Smith, the Wilson twins and Richard Wilson, so it’s quite a cross section.”

I ask about the popular appeal of the Summer Exhibition. “Well,” he says controversially, “I don’t believe in art that reaches out, that talks down or that it’s the artist’s job to make art accessible. I think it’s our job to do what we do and seduce viewers into being interested. Back in Turner’s day it was all professional artists. It’s a difficult concept isn’t it? I don’t like amateur art. Being an artist is a job. You don’t have amateur architects or brain surgeons. Art is, as I think Clement Greenberg suggested, essentially a metropolitan activity. You need to be connected to the debates and the arguments if you are serious.”

“But”, I ask, “what about exceptions such as Alfred Wallis?”  “Well Wallis is wonderful. I suppose that’s what we are hoping for. The exceptions.”

Born in Paisely in 1950. His trajectory to Royal Academician was not a straight path. He was a bad boy, fearless and contrary. His grandfather, who was a boat builder, drew cartoons in his spare time. His father was a draughtsman in the Clyde shipyards and taught him to draw”. Both a Glaswegian edge and a visual curiousity are intrinsic to who he is both as a man and an artist.

He was rebellious at school. In those days art schools offered pre-foundation courses which you could start when you were 16. “Listen, if you say to a teenager – would you rather go to school in uniform or to art school with long hair, Cuban heels and motorbikes? – well it’s not much of a contest is it?”

When he was 15 his father got a job with the Michelin tyre factory in Stoke-on-Trent. Art school in Newcastle-under-Lyme was followed by a motor cycle accident. When he got better the course had changed to typography and graphic design. He wasn’t interested. “I wanted to make life drawings. So I made an effigy of the principal and set it on fire and was thrown out. I had a black mark on my file for ages that counted against me when I tried to apply for other courses. And my Dad went ballistic. He thought it was rubbish that I was doing art anyway: ‘All you do is sit around painting women’s tits.’ ‘All you do is make tyres, I replied.’” He also managed to fit in a youthful marriage, have a son and work as a dustman, before finally making it to Chelsea Art School where he rubbed shoulders with the likes of Anish Kapoor, Helen Chadwick, Shirazeh Houshiary and Christopher Le Brun.

But even being at Chelsea was not straight forward. He was living in a north London squat with his first wife. “It was really vile. Counterculture turned bad – Hells Angels, junkies, people riding motorcycles in an out. And at art school then, to be a painter meant you had to be an abstract painter. Figurative painting was an embarrassment.” But in 1978, after he’d finished, things started to go well. He had his first show – jointly with Peter Smith – at the Acme Gallery, then the following year got a dealer, Blond Fine Art.

It was when he had his solo show in 1991 at the Imperial War Museum, in response to the collapse of that Berlin wall, that I first met him. Already known for his portraits of the sad, the mad and the bad of East London he was the unanimous choice of the Artistic Records Committee to record that historic moment. The gritty images of the crippled accordion player, the woman in the puppet booth, the apparently three-legged prostitute in Savignyplatz took my breath away with their hard-hitting poignancy. Though I remember him saying with a typical forthrightness that he wasn’t interested in “wanky, sentimental, political-prisoner kind of art.” And he was, I realised, a wonderfully original sculptor. The rag-bag of human destitution that made up his cast of characters in Procession were put together from his old clothes and those found in East End markets, which he’d covered in wax and plaster. Slightly smaller than life-size this trail of somnambulant dwarfs might have escaped straight from Brecht’s Mother Courage. 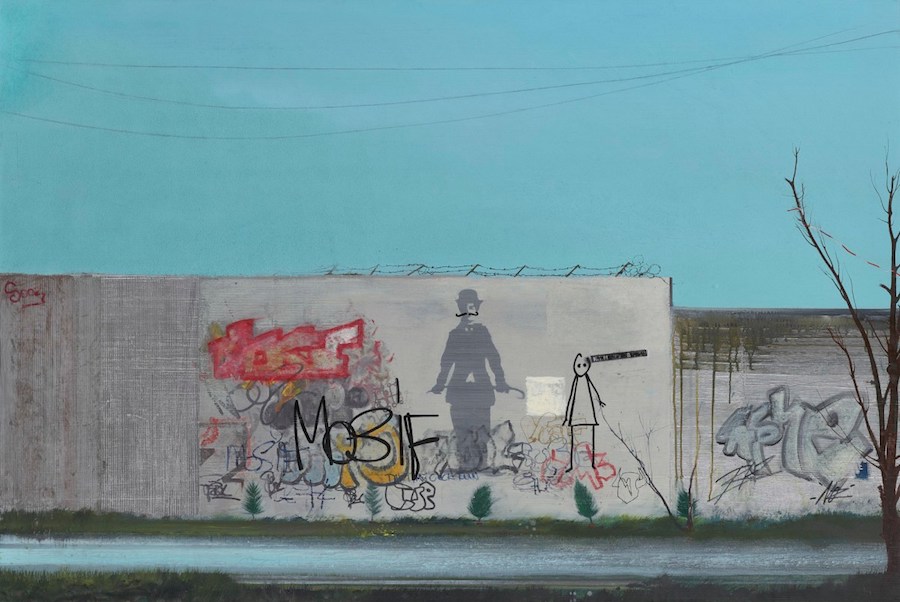 He’s also a strong landscape painter – if landscapes you can call them. There is nothing of the pastural tradition about them. He paints what’s around him and has become known as a painter of the East End. But he dislikes being labelled a social commentator – he’s too much of a contrarian for that. Rather, like his friend the writer Ian Sinclair, he’s a chronicler of the down-and-out, the skinhead, as well as the Hawksmoor church and stray urban dog. He also paints remote Scottish islands, motorways and bits of road near his house in northern France. What he chooses is never the picturesque but rather the incidental, the marginal, the thing that until he paints it most people won’t even have noticed. In 2010 he started his After Sickert series: small erotic scenes charged with some of the shock of Sickert’s original paintings. He also designed sets and costumes for Sir Kenneth MacMillan’s last ballet The Judas Tree at The Royal Opera House.

It’s obvious that he’s enjoying his well-earned success but he’s critical of the commercialisation of the art world. Not that he is a purist. He needs to sell but, as he says, for his generation of art students what counted was critical rigour not ‘are we going to sell to Saatchi?’ I suggest that this commercialisation of art is dangerous, that it skews what is made. That it can stifle originality. He agrees there’s a hazard that art becomes of ‘no consequence’, that there’s a move to make it all too crowd-pleasing and curator-friendly. He expresses worries about the singularity of the art market and how it pushes artists to make signature works that sell.

Jock McFadyen is an artist who is not easy to pigeon hole. His work is eclectic, singular and raw. It reflects both the edginess of ‘real’ life and his intellectual concerns about the possibilities and fluidity of paint. He’s a rebel yet a conservative. A detail highlighted by the fact that he’s shown work in his East End Acme studio and at Wapping Project, as well as The National Gallery, Agnews and the Fine Art Society. He is that rare thing in the modern art world – an original. His vision is unique, idiosyncratic and muscular and reveals a detached humanity that throws light on the liminal and marginal aspects of the world we inhabit, which so many of us miss. As his friend Ian Sinclair says: ”the world is always static in the sense that you’re a mass observer and you can’t afford to care whether people are busy or not. You are a witness.”

This year’s Summer Exhibition is lucky to have Jock McFadyen to act as singular and fearless witness. It promises to be an interesting show.

A monograph on Jock McFadyen is due from the RA in May 2019.

Held without interruption since 1769, the Summer Exhibition displays works in a variety of mediums and genres by emerging and established artists.

The works in the Summer Exhibition are selected and hung by Royal Academicians – who also exhibit works in the exhibition, creating an eclectic mix of work by established artists alongside emerging talent and first-time exhibitors. In previous years, nearly two thirds of the exhibits were by non-Academicians, £50,000 worth of prizes was awarded and over 5,000 works were sold.

Everything you’ll see at the Summer Exhibition represents what is happening in the art world right now. It features new and recent art created by everyone, from emerging artists to the biggest names in contemporary art and architecture. Now in its 251st year, the Summer Exhibition continues in the tradition of showcasing a variety of work in all media, including painting, sculpture, photography, printmaking, architecture and film. This must-see exhibition is a unique window onto all areas of the contemporary art world.